Google just announced significant enhancements to its machine learning services (MLaaS), attempting to close the significant competitive gap that Microsoft  has enjoyed, in my opinion, for the last year or so. Not to be left out, Amazon.com AWS announced the company’s own new MLaaS tools and services at AWS Re:Invent last November, trying to court AI application developers to build their smart apps on the AWS cloud. MLaaS is still in its infancy today, but it may become a dominant AI platform for enterprises who would prefer to leave all the messy details to someone else, and rent AI services by the click. This article summarizes each company’s strategies and tactics and tries to size up the winners and losers.

MLaaS: the promise and the problem

Machine Learning is just plain hard, especially the complex area of Deep Learning. Deep neural networks are trained with millions of data samples,  analyzed by racks and racks of NVIDIA GPUs, in order to extract and recognize features and categories. This is the dawning of the “AI Era,” so enterprises and government agencies are of course scrambling to figure out what they need to do to avoid missing out on The Next Big Thing. To get there (wherever “there” is), they must decide which projects to fund, hire rare talent, buy a ton of servers and GPUs, preen their data for the task of supervised learning, and then build and optimize their own Deep Neural Networks (DNNs). Sounds hard? Well, MLaaS provides an easier option: take a short-cut and use pre-trained neural networks for image, video, voice, and natural language processing, offered by the major cloud service providers. Why spend all that time and money training a neural network yourself, when you can just write a cloud-based application that accesses a pre-trained network via a simple API? 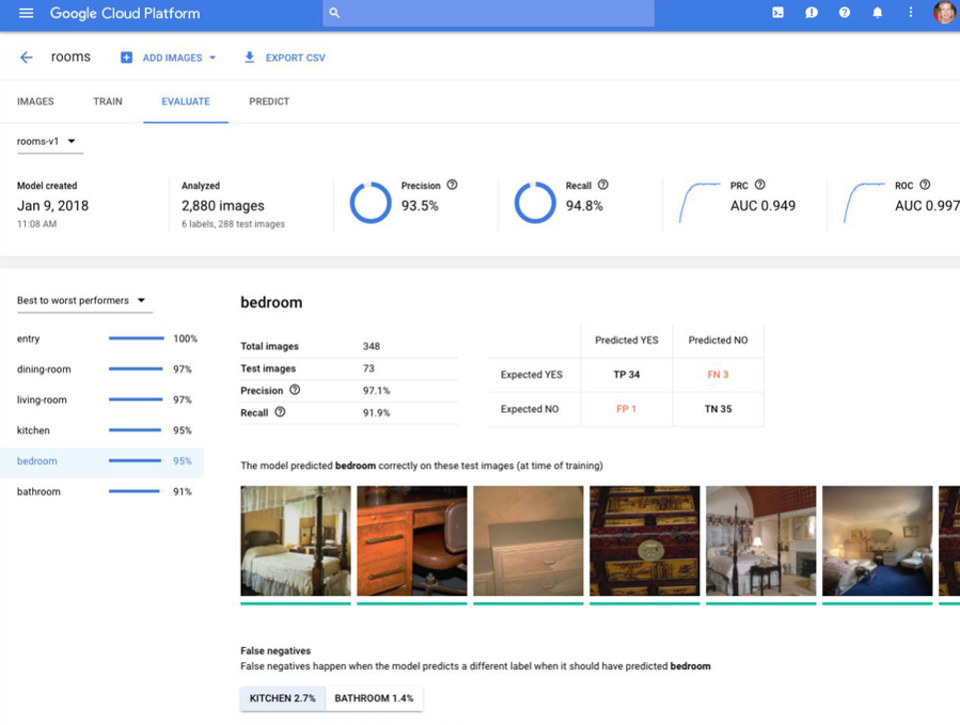 Google Cloud AutoML provides dashboards to enable the developer to easily gauge the precision of the AI model.

Conclusions
First, I must provide a caveat: however good these AI services may be, enterprises need to be cognizant of the limitations of MLaaS. The problem, of course, lies in the details. What if the pre-trained network as a service does not adequately encompass the universe of faces, vocabulary, and objects you want it to recognize? What if you want to run the AI application on your own infrastructure, keeping all that valuable data in-house where it at least appears to be safe? In either case, MLaaS may not be the AI on-ramp enterprises are looking for. Microsoft and Google are attempting to address these functional limitations of MLaaS, but I think that Google ’s approach could produce more accurate results—AutoML is actually building a custom AI model, instead of simply providing a customizable pre-processing layer.

Incidentally, I was surprised to learn that AutoML runs on NVIDIA GPUs, not the much-vaunted Google TPU (yet to be made available on GCP). I expect that could change soon, but it does indicate that Google ’s pre-announcement of Cloud TPU last spring was timed more to disrupt NVIDIA GTC than to align with impending availability.

Nonetheless, I believe that Google’s bench strength in AI will help the company meet and possibly exceed Microsoft’s current leadership in MLaaS technology, while Microsoft ’s strength in the enterprise software market will help it monetize its AI investments through its applications portfolio.