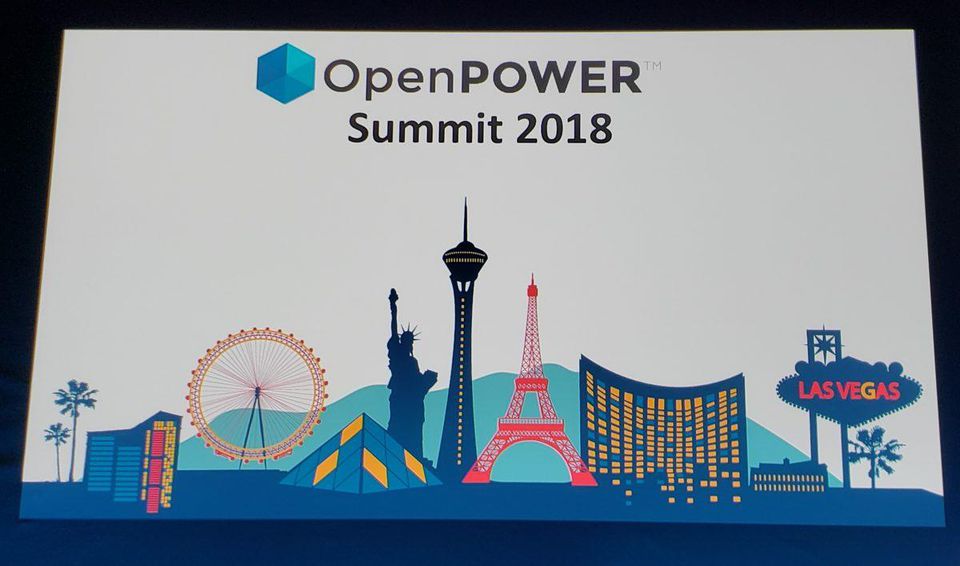 The OpenPOWERSummit was held today in Las Vegas, NV

Three “flavors” of systems architecture are currently vying for the datacenter- Arm, POWER, and X86. The OpenPOWER Foundation represents the ecosystem for all things POWER—a collaborative, open-source effort to challenge and upend traditional x86 architecture’s dominance in the industry. Each year, more companies sign on as providers and customers—the group has now grown to include 325 members. I have been following OpenPOWER for some time—if interested, you can read my last check-in two years ago on the consortium here. In addition, there’s been big action lately on the POWER systems architecture and CPU front with the rollout of the first and secondphases of IBM’s POWER9 CPUs.

At today’s OpenPOWER Summit in Las Vegas, I’ll be hearing from many leading hardware, software, and cloud vendors on how they are putting the new POWER9 to work in their new OpenPOWER-based products. I wanted to share my take on some of the new offerings, and check in on the foundation as it stands headed into its fifth year. I have always been impressed by POWER architecture given its acceleration capabilities, big cores and memories, and at this year’s event, I am very focused on newcustomers using the technology. The biggest announcement was that Google confirmed that they have deployed POWER into “Google’s Data Center”, and that’s a very big deal for OpenPOWER.

A range of new solutions

POWER architecture’s biggest advantage has always been in its acceleration capabilities- GPUs, FPGAs, DSPs, and ASICs with added memory coherence feature. These add-in cards or chips on POWER architecture give machine learning, big data, security and networks workloads super-human powers over straight CPU acceleration.  The new POWER9 sports an impressive array of cutting-edge technology, including NVIDIA NVLink, OpenCAPI, and PCIe Gen4. POWER9 features four times the number of threads per core and up to 9.5 times more memory bandwidth than x86 and was built from the ground up for big data, AI and ML workloads. Naturally, this opens up a whole new range of development possibilities for members of the OpenPOWER consortium—the fruits of which were on display at the summit. 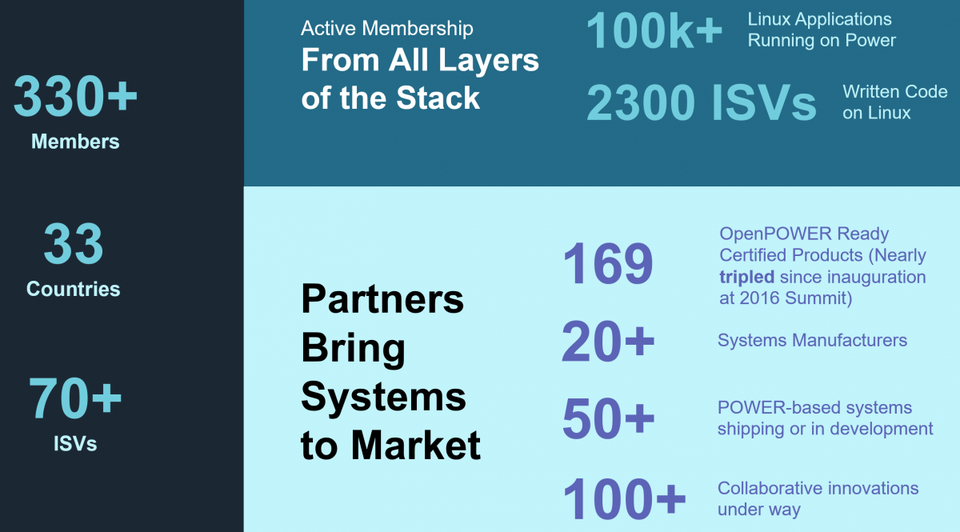 New POWER servers were announced at the summit, from consortium members Atos, Gigabyte, Hitachi, Inspur, Inventec, Rackspace, Raptor, Wistron, and others. Additionally, new OpenCAPI devices were announced from Alpha-Data, Amphenol, Cavium, Mellanox, Nallatech, Rambus, and Xilinx, which seek to capitalize on the significant memory bandwidth advantage of POWER9. Broadcom Limited, Eiditicom and NEC all announced new PCIe Gen4 devices, which they claim will accelerate compute, networking, and storage processes on OpenPower platforms. On the software front, the event also saw a slew of new OpenPOWER-compatible offerings from companies such as brytlyt, Elinar Oy, ISVs H20, MapD, and others, many of which are focused on AI and modern data workloads—POWER9’s bread and butter. I will be diving into the show to get details on all of these new offerings.

Google confirms deployment
The biggest OpenPOWER Summit user news was that Google confirmed that it has deployed the “Zaius” platform into its datacenters for production workloads. Google’s Maire Mahoney, on stage at the event today said, we have “Zaius deployed in Google’s Data Center,” and we are “scaling up machine count.” She concluded by saying she considers the platform “Google Strong”.  Mahoney shared with me afterward that “Google Strong” refers to the reliability and robustness. Not to take away from the other deployments announced at the event, but this announcement is huge.

I will be asking more questions on the deployment scale if Google will talk. 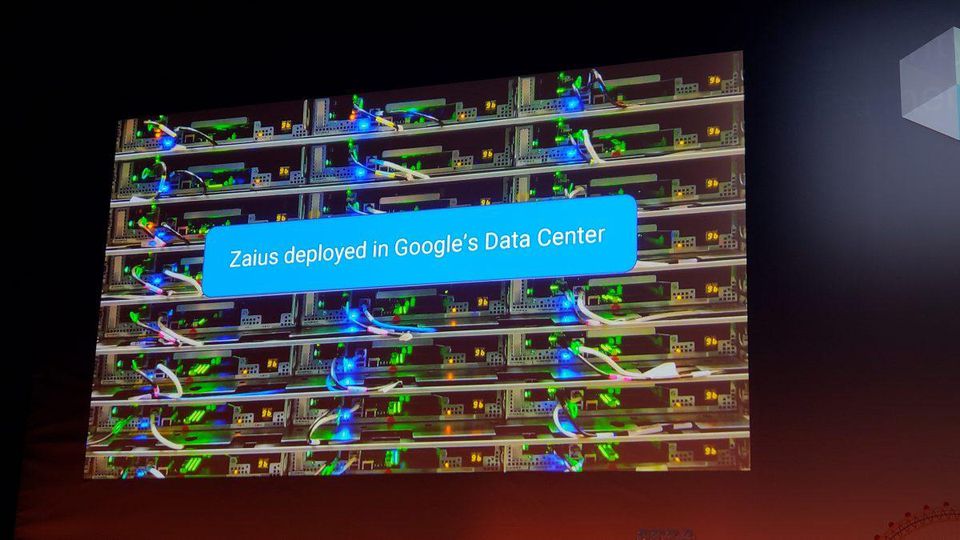 Many large enterprises already use IBM’s Power Systems. IBM says 8/10 top retailers, 8/10 top insurance companies, 10/10 of the top Telcos, and 10/10 of the top banking firms run IBM Power Systems. Also, the company says 7/10 of Fortune 10 companies and 12/20 of the Fortune 20 enterprises run IBM POWER8 in their datacenters. That, in itself, is impressive, but how about new customers, some that were “born in the cloud” aka “cloud-native”? Moreover, who are evaluating versus deploying commercial workloads?

Some of the big name OpenPOWER members gave testimonials on the benefits their organizations are seeing with OpenPOWER deployments. Hyperscale datacenter provider Tencent says that since purchasing some OpenPOWER-based systems for its enterprise datacenter, its efficiency has improved by 30%, and it saved 30% on both rack resources and server resources. This was the most impressive testimonial so far.  PayPal says it is using Power architecture’s computational power to process large datasets and accelerate deep learning for fraud prevention efforts. Online retail giant Alibaba’s cloud arm, Ali Cloud, announced it had deployed OpenPOWER servers on its Ali X-Dragon Cloud pilot platform, lauding the servers’ “ease of use and compatibility.” I will be digging into all these impressive deployment claims at the summit. I would like to get Google’s latest update on any progress.

Uber revealed that it intends to use the Summit supercomputer at Oak Ridge National Labs to test Horovod (one of the company’s many AI projects) at scale across 27,000 NVIDIA GPUs. Machine learning is embedded in a lot of Uber’s technology and helps the company optimize driver routing, identify fraudulent accounts, and give more accurate pricing estimates to riders.

LimeLight, a company which provides clients (such as the BBC and Marvel Comics) various tools to enhance digital content streaming, says that OpenPOWER (with PCIe Gen4 on POWER9) allows it to bypass the PCIe Gen3 bottleneck that occurs with other servers—resulting in faster streaming and less buffering. I am not certain if this is testing or commercial deployments but will do my best to find out. 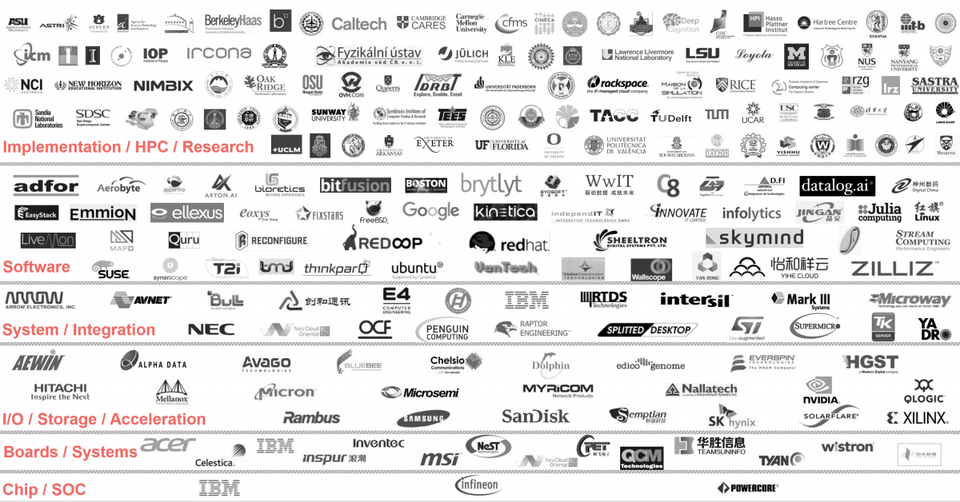 This diverse breadth of new POWER9-based products and solutions is something that could only be attained through OpenPOWER’s model of open collaboration, a need, and sheer force of will. IBM knows that the secret to success for POWER9 is all about building out the ecosystem that leverages its architectural strengths in relevant workloads, and its collaborators recognize a good product when they see one and are clearly eager to take advantage of the new architecture. I look forward to seeing the OpenPOWER foundation keep up the good momentum, and I am excited to see the next generation of POWER9-based products in action with even more customer stories.