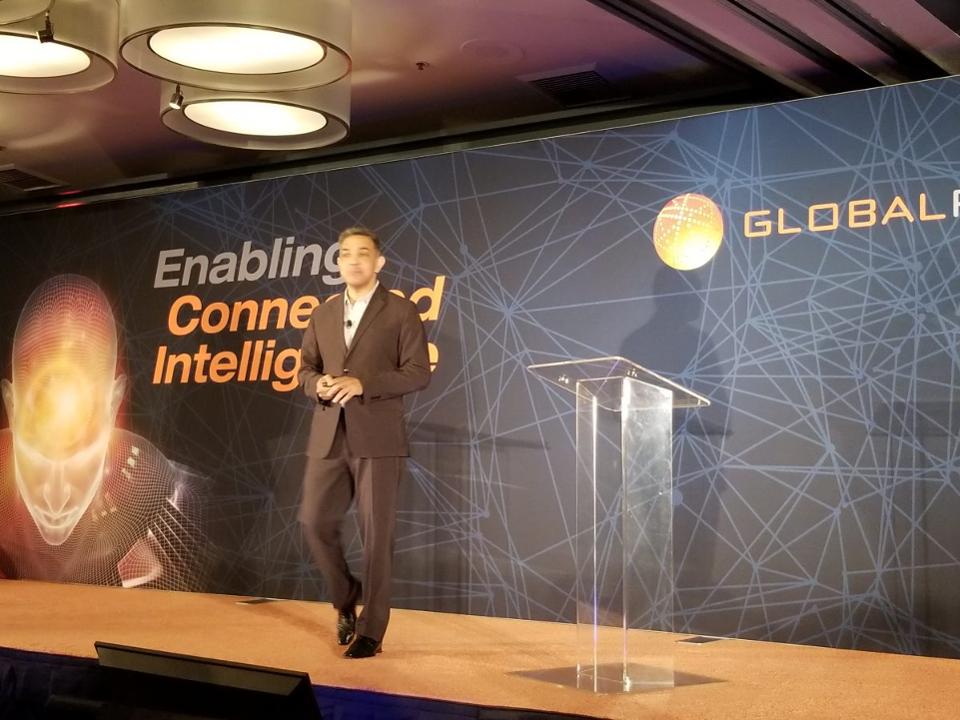 My past views of GlobalFoundries

I must start with my old perceptions of GlobalFoundries. Maybe you can relate. Being an ex-AMDer, I was always a bit skeptical of GlobalFoundries execution and differentiation. That was a very narrow portal to assess GlobalFoundries total business, I admit, but it seemed like there was a constant renegotiation of Advanced Micro Device’s wafer supply agreement. While AMD shared part of the blame for demand, I believe GlobalFoundries had major execution issues to deliver the frequency AMD needed at the right time. Then there was the IBM deal. Even when IBM paid GlobalFoundries to take their fabs and some technology, it looked like GlobalFoundries was just taking on yet another risky bet.

The situation has changed

The situation improved with AMD and I’ll admit, I was wrong on part of the IBM fab and technology acquisition.

GlobalFoundries delivered for Advanced Micro Devices on Ryzen desktop and it appears on Epyc, although I’m sure Epyc would appreciate some more frequency. Everything I am seeing so far in the market and hearing from AMD is all positive, even behind closed doors. GlobalFoundries bigger challenge will be with Raven Ridge, or notebook Ryzen with integrated graphics, requiring even better performance per watt than with desktop Ryzen.

The IBM acquisition appears to be a major coup in RF and maybe even in ASICs. With the IBM acquisition, GlobalFoundries became the #1 market share leader in RF, half of the driving factor in 4G and 5G, and becoming more important every day.

22FDX is very differentiated, China appears committed, and it appears TSMC and others are chasing the company on this one.

GlobalFoundries has grown quite a bit over the past few years acquiring competitors and gaining new customers along with those acquisitions. Sanjay Jha, GlobalFoundries CEO for the three years has spent a lot of his time with the company strengthening the company’s position as a key fab partner to the biggest fabless semiconductor companies in the world. A lot of Jha’s leadership has been around commitments and discipline and I believe that has translated into improved execution and happier and more confident customers.  Sanjay has extensive experience in the mobile sector previously serving as the CEO of Motorola Mobility and COO of Qualcomm. This experience, I believe, gives Jha the empathy required to be a more customer-centric fab.

Jha’s fundamental vision for the company lay where the new economic value is and this is in real-time data. Data is the new oil and Jha wants to help his customers to search for it, pump it, move it, store it, process it, and monetize it. Jha segments the company’s opportunities into the virtuous connected intelligence cycle of clients that provide real-time data, networking that collects and secures the data and in data centers that analyze and improve it. This all makes sense and I believe “connected intelligence” is a good target for the company as it highlights their strengths and downplays their weaknesses. 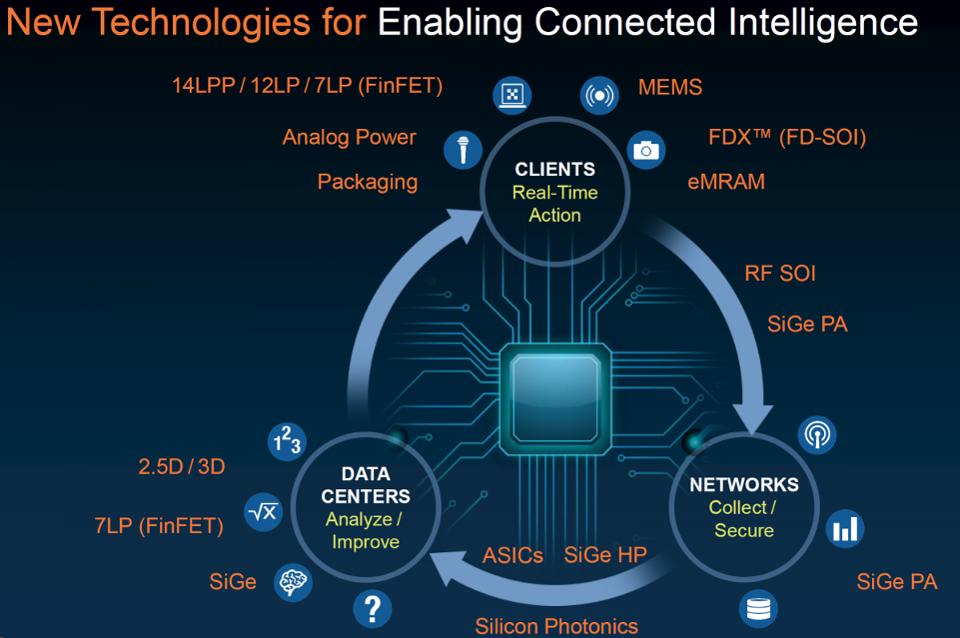 Jha also brought up a fascinating piece of insight, and that is the changing business model driven by many data-centric companies. He talked about software and services companies, like Google and Tesla, who are investing in their own design teams, and looking for a foundry partner. I see this trend everywhere I go, whether it’s with Google’s TPU and server security processors or even Tesla, who supposedly is working very close with foundries. Look at Apple and what they have done with their in-house designs. Apple’s All Bionic is the highest performance smartphone chip by a wide margin, all done in-house and fabbed in a foundry. 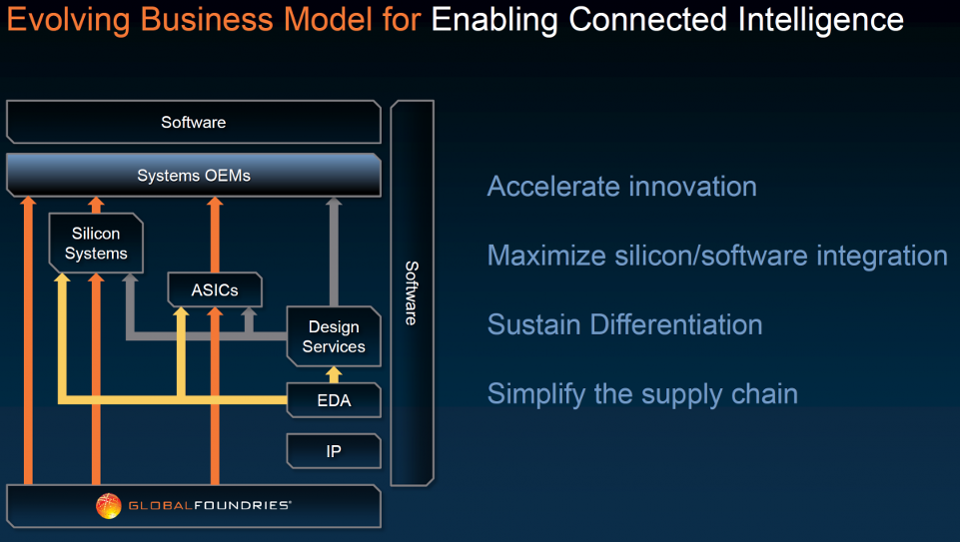 One of GlobalFoundries’ first customers and one of their biggest is still Advanced Micro Devices. GlobalFoundries was spun out of AMD back in 2009 when AMD spun off all their fabs into a separate foundry business with the help of Mubadala that we now know as GlobalFoundries. AMD has utilized GlobalFoundries 14LPP FinFET process to manufacture their Ryzen, EPYC processors as well as their latest Vega GPU products. 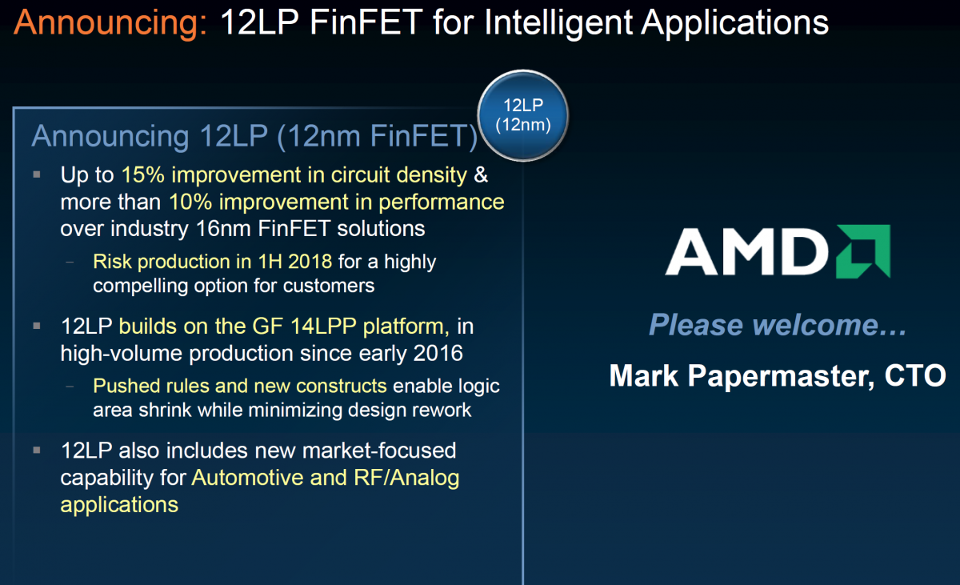 GlobalFoundries had AMD’s CTO Mark Papermaster on stage to talk about the close partnership between the two companies and how AMD remains committed to using GlobalFoundries into the future. This commitment is not only cemented in AMD’s success with their Ryzen and EPYC processors but also with their commitment to use GlobalFoundries’ new 12LP FinFET fabrication process for ‘intelligent applications’ announced at GTC 2017. 12LP is built on 14LPP and GlobalFoundries says it results in a 15% improvement in circuit density and 10% improvement in performance. AMD says that they plan to use this process for both CPUs and GPUs in the future.

As AMD will be likely competing with a combination of Intel’s 10nm and 14nm+ products, it will be vital for GlobalFoundries to execute flawlessly 12LP.

In addition to 12LP, GlobalFoundries introduced their new 8SW RF-SOI (Radio Frequency Silicon on Insulator) process which is the company’s first RF process to utilize 300mm wafers. This new process is a holdover from the IBM acquisition and represents the latest in the company’s RF offerings. With their 8SW offering as well as existing RF-SOI and SiGe (Silicon Germanium) GlobalFoundries has a very broad offering of fabrication technologies for wireless ranging from 5G to Wi-Fi. GlobalFoundries claims that they are already number one in RF market share and that is very likely a good place to be with the expectations that different types of RF communications will only grow with the implementation of 5G. GlobalFoundries had executives from some of the leaders in RF including Qorvo and Skyworks on stage to talk about GlobalFoundries RF capabilities and the future for the 45nm 8SW process. 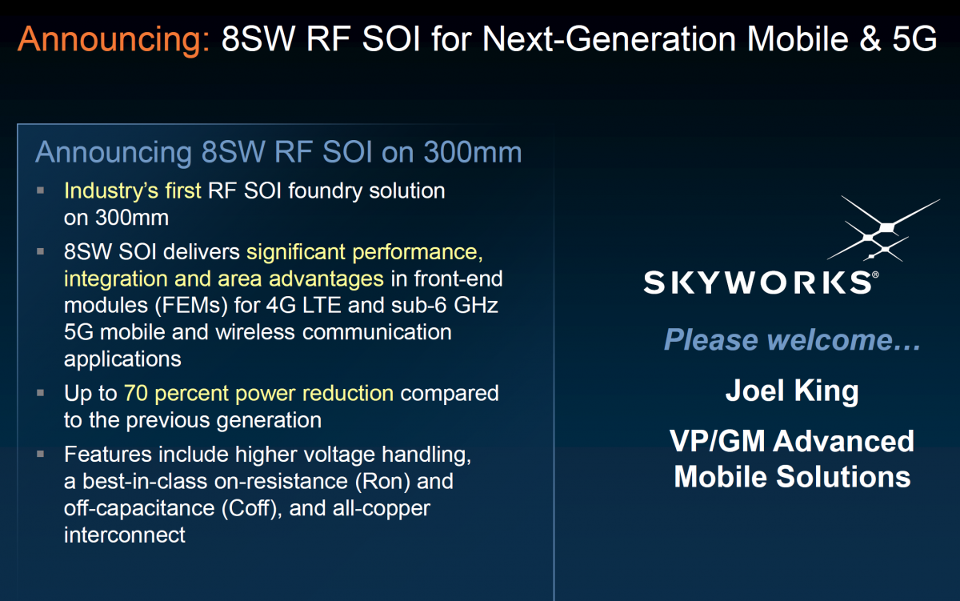 In addition to Qorvo and Skyworks, one of GlobalFoundries’ CEO featured one of the company’s biggest customers, Qualcomm. Jha indicated that Qualcomm’s involvement with GlobalFoundries spans most of their nodes ranging from the leading edge to 180 nm. Christiano Amon, Qualcomm’s President of their chip division, came on stage to talk about 5G, connectivity and all the different types of connected devices we will see. However, they did not make any announcements regarding 7nm or clarify which products they are manufacturing with GlobalFoundries. Given Qualcomm is #1 in mobile modems, RF, application processors, GPU and DSPs, so Amon’s vote of confidence meant a lot.

The last announcement that came from GlobalFoundries was a progress update on their 22FDX process which is their 22nm fully depleted SOI process. I wrote about their 22FDX process earlier this year with their partnerships that they established in China and how it could help the company expand on a global scale. This includes being able to now produce wafers at up to 1.5 million wafers per year between the Dresden and Chengdu fabs, which will be critical to meet the demand that is expected to exist as demand for 22FDX is expected to grow. 22FDX is designed to be an enabling technology that delivers high performance at a relatively low cost, which is great for new startup chip companies.

GlobalFoundries touted two applications of 22FDX with customer design wins that are expected to be big growth areas for the industry moving forward. These companies included Dream Chip with their autonomous ASAS vision processing SoC for automotive applications and Ineda Systems with their I2 SoC for IoT, Smart home and Industrial. Overall, GlobalFoundries said they are on-track for 20 test designs by the end of 2017 and 15 product tape-outs by the end of 2018. With the gigantic amount of capacity the company is putting in, GlobalFoundries is banking on a high-degree of success.

22FDX is where the company can put the most hurt on TSMC, the world’s largest foundry by a mile. TSMC has responded with their 22ULP-7T, but I believe it heavily leverages their 28HPM-8T process and therefore is later and will likely have be lower density and higher power with higher mask count.

I’ve come a long way from my earlier perceptions of GlobalFoundries. GlobalFoundries seems like a very different company than it was two years ago, and while I recognize it’s a team effort, CEO Sanjay Jha had a lot to do with it. The large GlobalFoundries customers I have talked with believe the company is executing much better than they were previously and are more confident. Versus leveraging another company’s process and building chips off it, they are developing their own leading-edge technology. With the #1 RF share position and the increasing importance of RF with 5G and those new 20B end points, the company is well-positioned for growth. A lot has changed.

All in all, I’m impressed. I believe if GlobalFoundries can maintain their momentum and execution, they will be a much larger force to reckon with. Other foundries players like TSMC, UMC, SMIC, Intel and Samsung better be paying attention.