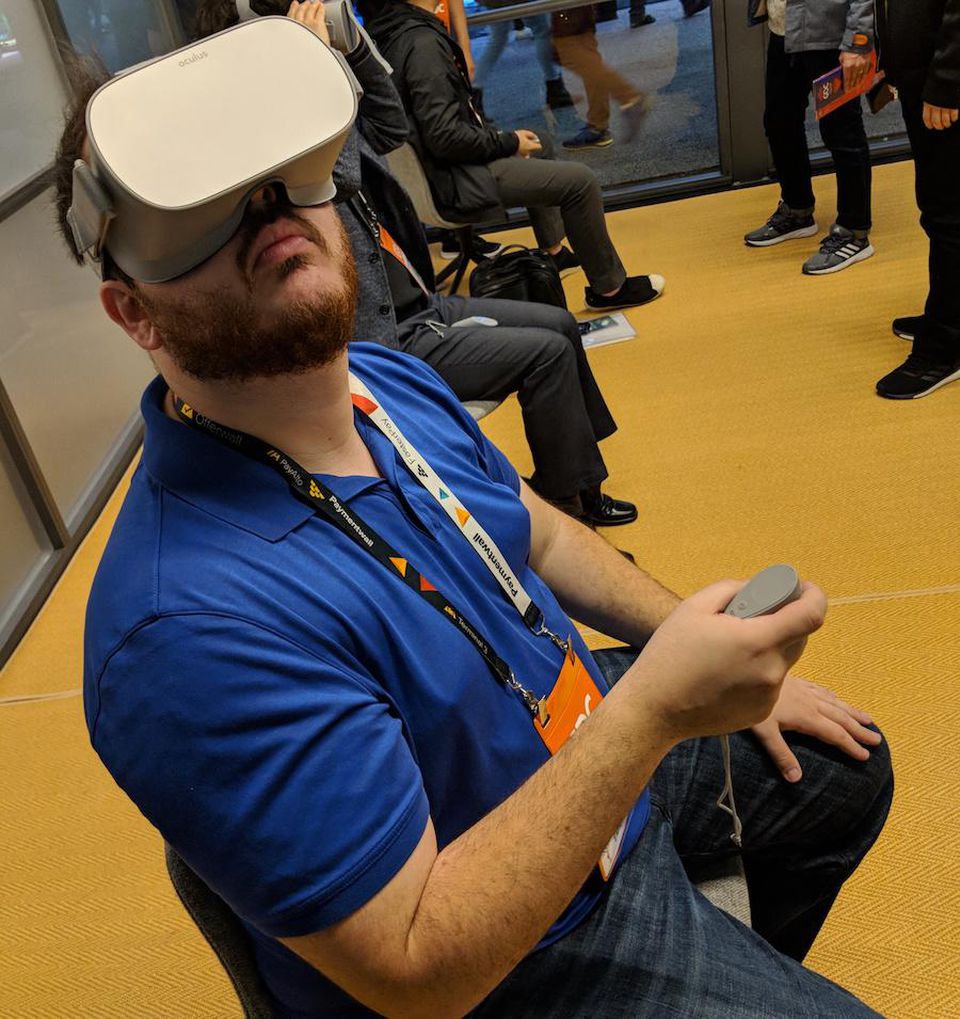 I attended the 2018 Game Developers Conference (GDC 2018) with primary goal of assessing the current state of VR. One thing that I noticed was that there was a lot less experimental VR and a lot more commercial VR showcased this year. These applications and games have a serious focus and end goal, ultimately designed to sell and keep consumers entertained. I wanted to take some time today to talk about some of the VR experiences that caught my eye at the conference, and what they mean for the industry.

One of the most hyped VR announcements from GDC was the public unveiling of Oculus’s $199 standalone VR headset, the Oculus Go. This standalone headset is the culmination of years of work from Oculus to deliver VR to the masses, offering everything needed for VR in a single device. There aren’t many standalone solutions on the market, and until now, Oculus’s own cheapest solution was a loss-leading $349 headset and controller bundle that additionally required a $800 PC. Only two years ago, the barrier for entry to VR was about $1,000. Many people (including myself) were understandably skeptical of how good the Oculus Go could be at such a low price point.

At the conference, Oculus showcased the Oculus Go with two cross-platform game demos: Settlers of Catan VR and Anshar VR. I trialed Anshar VR, a spaceship shooter game that I have previously played on other mobile VR headsets. Though the other headsets boasted similar or better specs than the Oculus Go, this game looked the best I’ve ever seen it on Oculus Go. The head tracking and framerates were extremely smooth—impressive, seeing as the Oculus Go is rocking Qualcomm ’s Snapdragon 821 inside (the same chip that’s inside the original Google  Pixel). Oculus deserves some real credit here for building an affordable, comfortable VR headset that plays great. I was skeptical about the Oculus Go, but now I am 100% behind it. I think it could be a huge success if Oculus and Facebook market and position it well.

A VR art museum
Another cool VR experience that caught me by surprise was the Museum of Other Realities (MOR) for the HTC Vive. The MOR is an experience, not a game or a demo. It is designed like a real-world art museum, giving some of the best VR artists in the world a venue to show off all the amazing VR art they have been making for the last two years. I went into MOR with no expectations and came out with my mind completely blown. Everyone and anyone curious about VR needs to try this thing out. If it becomes available for the Oculus platform, I could see this being a great place for people to try out the new Oculus Go headsets.

Another VR experience that made an impression on me was the integration of Tobii’s eye-tracking technology into Qualcomm’s Snapdragon 845 reference VR headset (which developers use to build their applications on, in advance of Snapdragon 845-based headsets becoming available). Qualcomm had previously partnered with SMI to deploy eye tracking capabilities in the Snapdragon 835, but SMI got acquired by Apple  and the partnership fell through. As far as I know, no working demo ever made it into the public’s view. The fact that Tobii has already scaled its PC VR eye tracking technology into a working mobile demo for the Snapdragon 845 reference headset is impressive. Eye tracking is going to be a big deal for VR and AR headsets in the future, and this integration is an important first step.

There were many other promising VR experiences showcased at GDC 2018. Owlchemy debuted its Vacation Simulator, the company’s sequel to its Job Simulator. Sony showcased its newly released Bravo Team FPS shooter game for PSVR, and the much-anticipated adventure game Moss. Ultrahaptics showed off technology that allows you to feel objects in VR and AR. Survios showed off its latest VR titles, including Electronauts and Creed.

These new VR games and experiences are leaps beyond what I saw 2 years ago at GDC, before the HTC Vive and Oculus Rift Launches. If GDC is any indication, we’re going to see VR experiences continue to get better and more affordable, drawing more and more mainstream consumers into the fold. I look forward to seeing what the coming years will bring.