As ZDNet’s Adrian Kingsley-Hughes points out, we know absolutely “nothing” about the iPad 3 right now.  While pontificating about future Apple products is a lot of fun, drives many page views and makes web site editors very happy, it’s  just a pontification factory.  At some point in the near future, the iPad will have a better display and will be lighter than its predecessors, which drives me to the conclusion that the next generations of the iPad will start to rapidly cannibalize HDTVs, particularly second or third sets. I’d like to share my thoughts on why this will happen.

I have done a lot of consumer research and have been tracking PC use in the living room for years.  Around 10 years ago, outside the very tech savvy, users started augmenting their TV viewing experience with a notebook PC.  The early majority pecked away at their notebooks as the rest of the family watched something the early majority somewhat ignored.  This 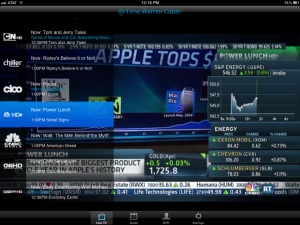 model then transitioned into family members watching shows that were on the major broadcaster’s web sites.  Remember when Big Brother started providing live PC feeds?  This model quickly was augmented by Hulu and Netflix diving into the market as an intermediary.  The iPad followed which provided very simple, manicured apps that gave access to rich “TV” content from Netflix, Hulu, and even cable companies like Time Warner and Comcast.

These viewing habits drove a wedge between two distinctly usages; personal and group viewing. Mobile devices like the iPad and their services enabled growth of personal viewing and consumers could watch finer slices of what they wanted to watch, when and where they wanted.

Group viewing isn’t going away any time soon, but as more people spend time on personal viewing, group viewing declines.  They only exception is “crossover” viewing where a family member is wearing headphones watching another show on a mobile device while other family/dorm members are watching on the HDTV.  Regardless of the viewing model, it drives the need more personal viewing devices and less group devices, or certainly drives the behavior to prioritize personal over group.

Consumers are changing their viewing habits from group to personal, but will future iPads be up to the task in terms of video and weight?

Future iPad Display as Good as Watching a 75″ HDTV?

No one publicly knows the iPad 3 resolution for sure, but let’s assume that the lines are doubled horizontally and vertically to provide a “2K” (2,048×1,536) resolution which provides 4X the resolution of the current.   I will also assume that content will come in three flavors: 1) upressed to 2K by the iPad, 2) services provide upressed 2K content, and 3) in special cases iTunes will provide native 2K content.  Net-net there will be video content that can take advantage of the new and higher resolution.

Most people watch iPad video content between 12″ and 16″ from their eyes depending on if they’re in bed or sitting on a couch. Assuming the iPad 3 is 2K, the visual experience would be similar  to watching a 75″ HDTV at 10′.  Users vary in terms of visual acuity and even neck length, but mathematically the numbers are accurate and make sense.  The farther the TV is away from the user, the larger it must be to compensate for the distance is away from the user.  Future iPads will provide a similar video experience as a huge HDTV.

Weight is a Deal-breaker

Many I discuss this with argue that the iPad 2 is light enough to replace much of the TV viewing.  There aren’t “standards” that dictate this, but from doing primary research with consumers, there are products that more comfortably enable someone to comfortable hold a device for hours and stare at it comfortably.  The Amazon Kindle DX2 at 18.9 ounces (1.18 lbs.) is the closer to right form factor and weight to be held comfortably in bed or on a couch.  If you have ever watched a show on an iPad 2 at 1.325 lbs. in the bed, you know exactly what I am talking about.  After a while, you wish the iPad would just float so you didn’t have to touch it.  Or you find a way to rig the stand so that you can lay on your side without touching it.  To effectively replace a TV, future iPads must be significantly lighter to effectively replace personal TV viewing.

5 iPads for the Price of One HDTV

Consumers have an amazing way of rationalizing cool electronics they want to buy.  Most consumers use their heart over their head when making an electronics purchase and I can see users rationalizing buying multiple iPads instead of placing their investment into a TV. If Apple were to go after the secondary TV market with vengeance, I could see the consumer rationalism going like this…. “Hmmmm…. I can buy 5 iPads for the price of  one high quality 60″ TV.  And everyone in the family would have them.  I will be the hero of the family in that everyone gets an iPad where they watch what they want to watch and do all the other great iPad things. And, when we want to watch the big game together, we can watch the older, but good enough 50″ we bought 5 years ago.”  This is human rationalization at work and happens every day in consumer electronics.

Siri Will Push Consumers Over the Edge

I’m not going out on a limb when I say I believe Apple will integrate Siri into future iPads.  The stronger commitment I think they will make is to an entertainment dictionary and natural language capability.  As I wrote last September on the fabled “iTV”,  instead of popping between Netflix, Hulu+, YouTube, iTunes and TWC TV, I believe Apple will aggregate and index this “channel” content into Siri to provide a one-stop touch and voice enabled experience. In this way, the users can say “find Revenge” and Siri will scan across all of the registered sources and look for re-runs, live or taped versions of “Revenge”, regardless of the source.  This is the ultimate remote controls in our world where there are a 1,000s of “channels” available.

This will serve as the final consumer rationalization point they need to make the tradeoff between a new TV or iPad.

Holiday 2012 Will Provide a Directional Indicator

With 3D an unmitigated flop in TVs and flat panel saturation becoming a reality, the TV industry is banking on “Smart TV” to pull it out of the hole in 2012.  As I’ve written previously, TVs won’t be very smart in 2012 when it comes to advanced user interface and they aren’t bringing anything else to the table to motivate consumers to replace their old HDTV.  What is new is a shiny new iPad with much higher resolution than their TV and the best entertainment remote control interface at a dramatically lower price than a new TV.  I believe the future iPad will take a big chunk of the secondary TV and even delay new primary TV purposes through consumer rationalization that it can serve as the primary “personal TV” device and I expect to start to see the effects in the holiday 2012 selling season.