Computex is an electronics expo in Taipei, Taiwan held every year for tech companies to show off their latest and greatest products to press and the rest of the industry. While you see more and more phones, tablets and datacenter hardware there, it’s still a PC show. Advanced Micro Devices has been one of the companies that has been attending the show for many years and traditionally launches products, when possible, at the show. This year was no different with the launch of Carrizo and Godavari, however the primary focus has been on Carrizo as it is an all new APU (Accelerated Processing Unit) that enables new usage models for Advanced Micro Devices APUs in notebooks and other similar form factors with a strong focus on gaming.

Carrizo is Advanced Micro Devices’s 6th generation APU and represents the company’s attempts to satisfy the market’s demands for better performance with improved efficiency. Advanced Micro Devices’s focus on efficiency results in Carrizo coming in as a 15W part with some higher power 35W options. AMD’s APUs have traditionally been known to be more powerful than their counterparts from Intel in the GPU part of the processor, and that appears to continue to be true with the Carrizo 6th generation APU family. As a result of that, Advanced Micro Devices is pushing more of a gaming-focused APU story with their APUs outperforming Intel’s Core i5 and Core i7 5XXXU series processors.

Advanced Micro Devices pushed for this by combining their latest generation Excavator CPU cores with their latest generation Radeon GCN GPU cores in this APU. AMD also integrated what used to be called the south bridge chip, directly onto the die of the APU, bringing improved power efficiency. The 3rd generation of AMD’s GCN cores utilized in the Carrizo APU are also capable of DX12 feature level 12 functionality, making it ready for Windows 10 and more specifically Windows 10 gaming. 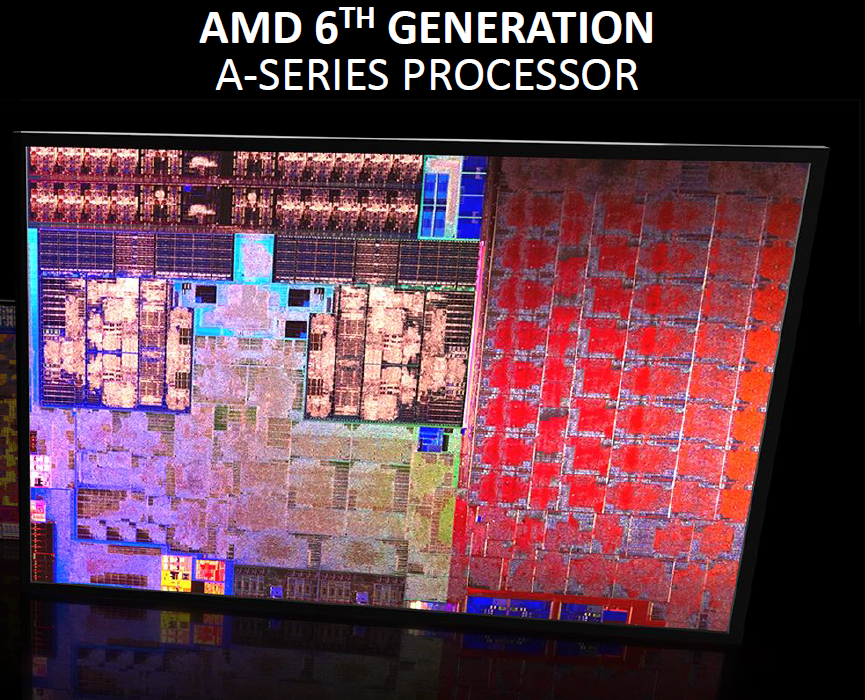 The gaming selling point for Carrizo is offering mainstream gaming or eSports on a laptop with more than 30 FPS in games like DOTA 2, League of Legends and Counter Strike: Global Offensive. This marketing of such capabilities is actually smart on the part of AMD because those three games are among the three most played games among titles for PC gamers. In fact, looking at Raptr and Steam Data, it wouldn’t be much of a stretch to assume that AMD is marketing to tens of millions of gamers. The only risk could be that is a consumer doesn’t self-identify with gaming or is turned off by it. Also there is a potential for it to leak to the commercial market, but AMD has a different brand there so I don’t think it’s a big deal.

As a result, AMD is marketing a playable game experience on laptops for a very affordable price segment as AMD is targeting Carrizo to be an APU for laptops between $400 and $700. This is a very accessible price for many and is also one of the largest segment of the notebook market. AMD also touts the fact that the Xbox One can and will stream content over HEVC to the Carrizo APU and should work best on AMD. This is all capable of being displayed at variable refresh rates thanks to AMD’s native support for FreeSync variable refresh rates in Carrizo laptops as well. I’m looking forward to seeing some independent reviews of these capabilities.

The story with AMD and Carrizo at Computex was constantly repeated to be about efficiency and improved battery life. These were some of the most important things to AMD when they created Carrizo, so it only seems natural that they used a latest generation power optimized Excavator CPU core with High Density Library, gaining both performance and reducing space used up on the chip by roughly 23%. AMD also utilized a new video decoder which is capable of decoding HEVC or H.265 in hardware, which brings even more power savings when doing video playback and streaming video content from an HEVC source like the Xbox One.

All of the aforementioned power improvements, AMD claims, result in double the battery life over the previous generation of APUs. This appears to be a combination of idle power, which appears to have improved by more than double, and active power, which has seen significant improvements across the board as well. Again, I’m looking forward to the reviews to verify this.

AMD’s Kevin Lensing, Senior Director of Mobility Solutions also hit on how AMD’s Carrizo APU is the first processor enabling mainstream notebooks to have HEVC hardware decoding. This feature allows for any laptop utilizing the Carrizo APU to not only smoothly decode both 1080P and 4K video, but to also do it extremely efficiently. It is also the first APU from AMD that is HSA 1.0 spec compliant, even though AMD talked very little about HSA.

As a demonstration of AMD’s HEVC decoding capabilities, Kevin showed off a demo where they affixed a Samsung camera with HEVC video capability to a drone and streamed it wirelessly to a Carrizo notebook. This was an interesting demonstration of HEVC decoding capabilities beyond the already mentioned examples of Xbox streaming, smoother 4K decode and prolonged streaming capability. AMD also has a video search capability called AMD Looking Glass that they enable through HSA which may be compelling to movie and TV show enthusiasts. I’m looking forward to using this technology myself as every video search product has been a disappointment so far.

On stage at AMD’s Computex press conference, the company paraded around some of their strongest partnerships with Carrizo, specifically with Microsoft’s Roanne Sones talking about their partnership on Windows 10 and DirectX 12. She reiterated that all of the benefits of Windows 10 synced up with Carrizo’s improvement goals and it seems as though Carrizo’s timing is perfect for Windows 10. Roanne also talked about the importance of streaming and battery life for Windows 10 and how much improvement AMD had made in that area with Carrizo.

Bai Peng, VP and GM of Lenovo’s Notebook Business Unit also talked about AMD’s long standing relationship with Lenovo and how they have together shipped over 15 million consumer notebooks over the course of their 5 year partnership. Lenovo is the world’s #1 PC OEM, so having a close relationship with Lenovo can only help AMD in the long term, especially when they have great chips like Carrizo. Bai also talked about how Carrizo brings a value proposition benefit to the customer when in Lenovo’s laptops and that Lenovo was impressed with AMD’s strong video streaming and DX12 gaming performance.

One of the most notable announcements for Carrizo was the fact that the Lenovo Flex 3 would be coming with an AMD Carrizo APU this month. This notebook is very reasonably priced starting at around $549 but currently only ships with an Intel CPU. The unique form factor and pricing of this laptop make it a prime target for AMD’s Carrizo. However, AMD also announced that they would be shipping Carrizo in laptops from Acer, ASUS, Toshiba and Hewlett-Packard in addition to Lenovo in the next month or two. That’s the most OEM support I have seen for an AMD platform a long time, but getting the design is one thing. Getting it on the shelf and sold out could be another matter as AMD has significantly reduced their marketing spend with retail. Intel hasn’t.