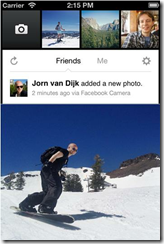 Facebook has received a lot of criticism lately about their ill-strategizedand executed IPO. During the IPO build-up, many objections were brought up about Facebook. One of these criticisms involved their lack of ability to monetize mobile. To be fair, very few social media companies if any have figured out how to do this. Embedded in the mobile conversation is something that is apparent to any Facebook mobile user, whether its the highest-powered phone; the Facebook mobile app has serious issues. The Facebook mobile app is slow, dreadfully slow, and notifications only work intermittently. Uploading pictures is a very slow and laborious process and users have to upload the photos, one by one, and have to wait as they are loading as they won’t upload in the background. If Instagram knew how to develop great mobile apps and Facebook didn’t, the acquisition could make sense, right?

Facebook Camera is one of the best photo apps I have used and completely unlike the primary Facebook app. The app is fast, reliable, looks great and essentially duplicates every feature the Instagram app offers. The photo filters are named things that make sense, too, unlike Instagram. Seriously, the “Walden” filter? Add this to the giant Facebook audience and I can say that at least for this wave, Facebook has finally figured out mobile photos. What does this all mean? Facebook, as it was purchasing Instagram, knew all along it had the right technology and design to duplicate every Instagram feature and do it beautifully and fast, too.

Now that we know Facebook always had the mobile technology to do mobile photos right, this only leaves one rationale to purchase Instagram. It was all about eliminating the competitive threat Instagram posed. That is the subject of another analysis.