I attended EMC World this week in Las Vegas and wanted to share with you my initial, high-level thoughts on the conference. We will be following up with some more detailed papers later on Dell’s acquisition of EMC and what it means to customers. Like most large IT events, EMC World is the company’s main, annual event to interact and engage with customers and their ecosystem. It’s where most of the major announcements happen and where, if EMC wanted to make a big splash, they would do it. Of special significance this year was the pending Dell acquisition of EMC and the EMC Federation and everyone in attendance was looking for any indication of what to expect in the future. Here is my quick-take.

1/ Theme: “Modernize” was the theme of the entire conference, or in other words, “get ready for the cloud”. This was really EMC’s first major push at this. EMC didn’t need to be the first with the push to the cloud, quite frankly, because they are doing well in the enterprise, but now CIOs are screaming for cloud options, and the enterprise market isn’t growing. 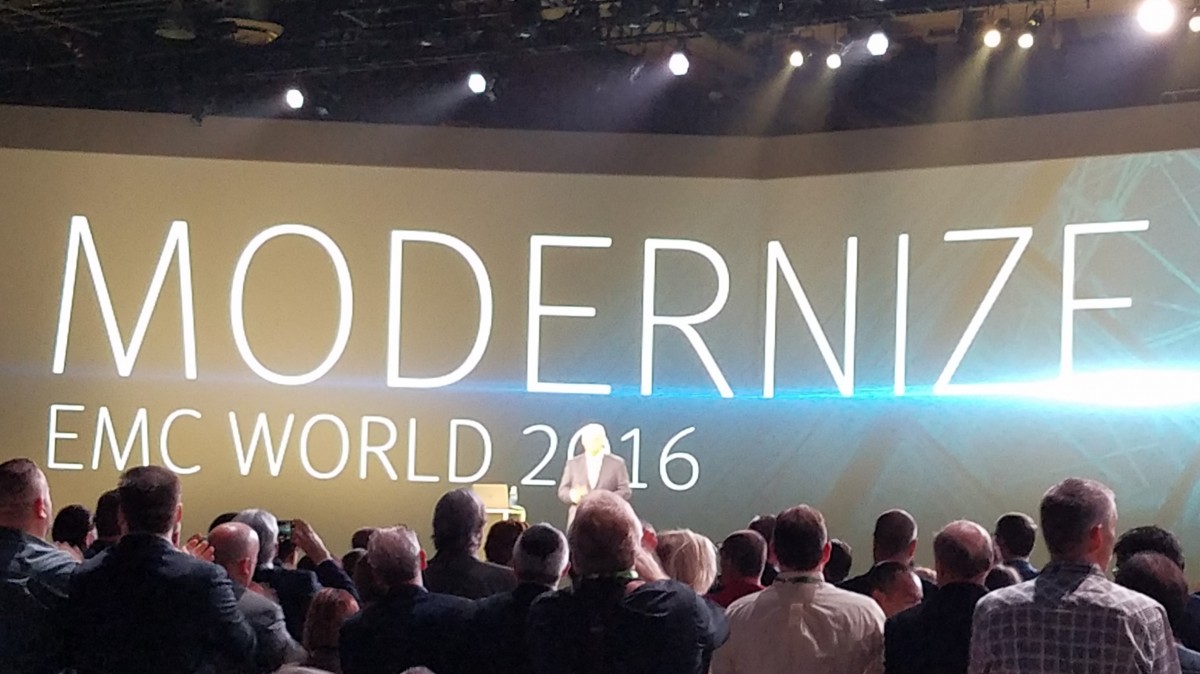 “Modernize” was the name of the game at EMC World. Joe Tucci getting a standing ovation. (Credit: Patrick Moorhead)

2/ Joe Tucci- Michael Dell handoff: It was truly a superb handoff between Joe Tucci to Michael Dell on the big stage on day one. It didn’t look awkward or contrived and that’s really important because it sends a message to everyone the state of the acquisition. Michael Dell was the visionary and the statesman and Joe Tucci was his typical straight-talker but didn’t make it about him, but rather EMC. Joe is to be commended as I believe it put some folks at ease. I’m going to miss Joe in the industry and will be sorry to see him exit. 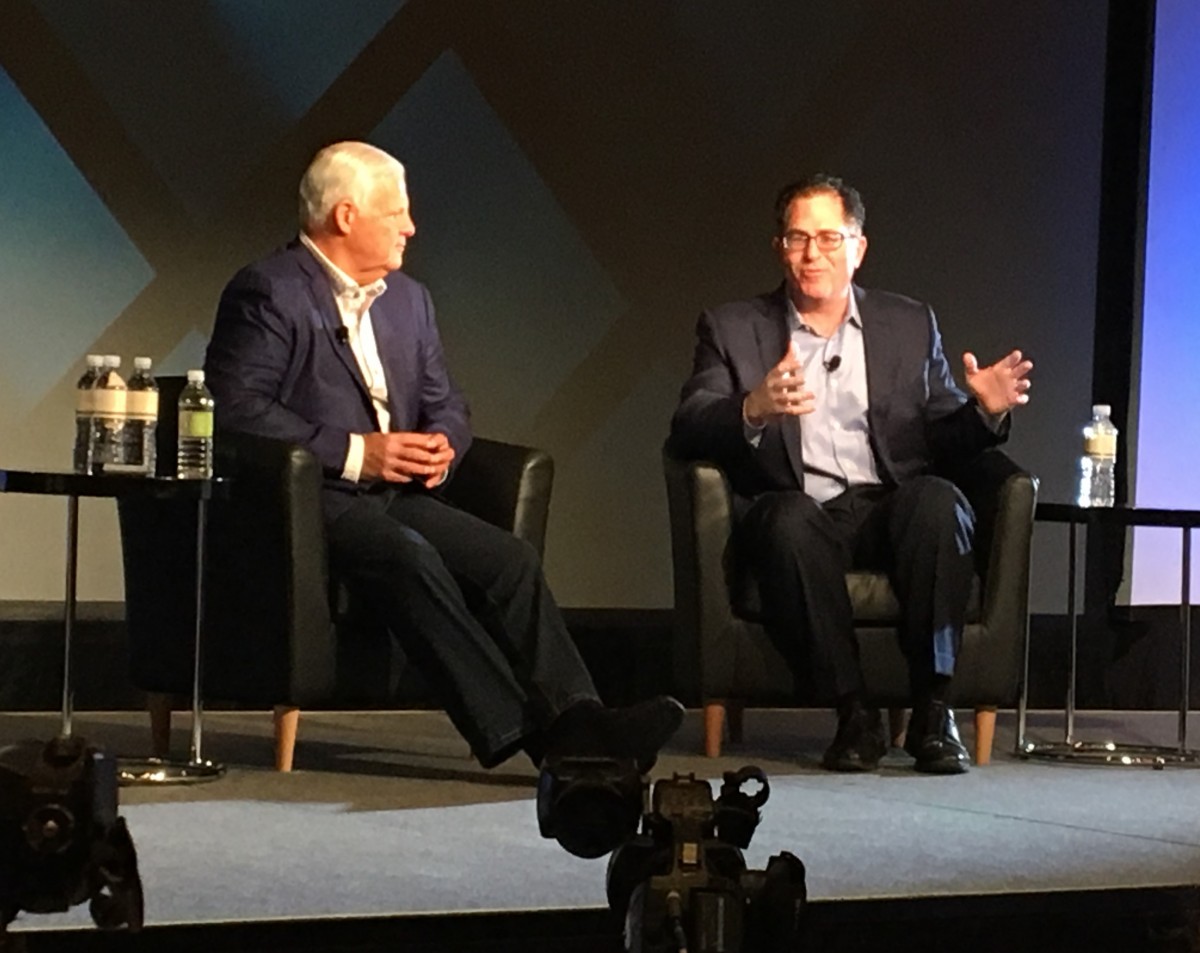 3/ Branding and “merger” talk: While the word “merger” was used a lot on-stage and in meetings, this is an “acquisition”. Dell is acquiring EMC and the new name represents this. The name of the new company is “Dell Technologies”. Dell Technologies will be the new “EMC Federation” which includes Dell the PC company, EMC II the storage, server and cloud solutions company, VMware, Pivotal Software, SecureWorks Corp., RSA Security, and Virtustream. I do appreciate the softer word “merger” but it’s important for everyone to know who is buying whom. I personally lived through an acquisition called a merger and it was ugly, not just for the term used, but because of the message it sent to the organization. EMC and Dell both know how to integrate companies so I’ll give them the benefit of the doubt. I also want to be clear that the EMC enterprise portfolio will not only be a huge part of the combined company, it will be headquartered out of EMC in Hopkinton, EMC headquarters. 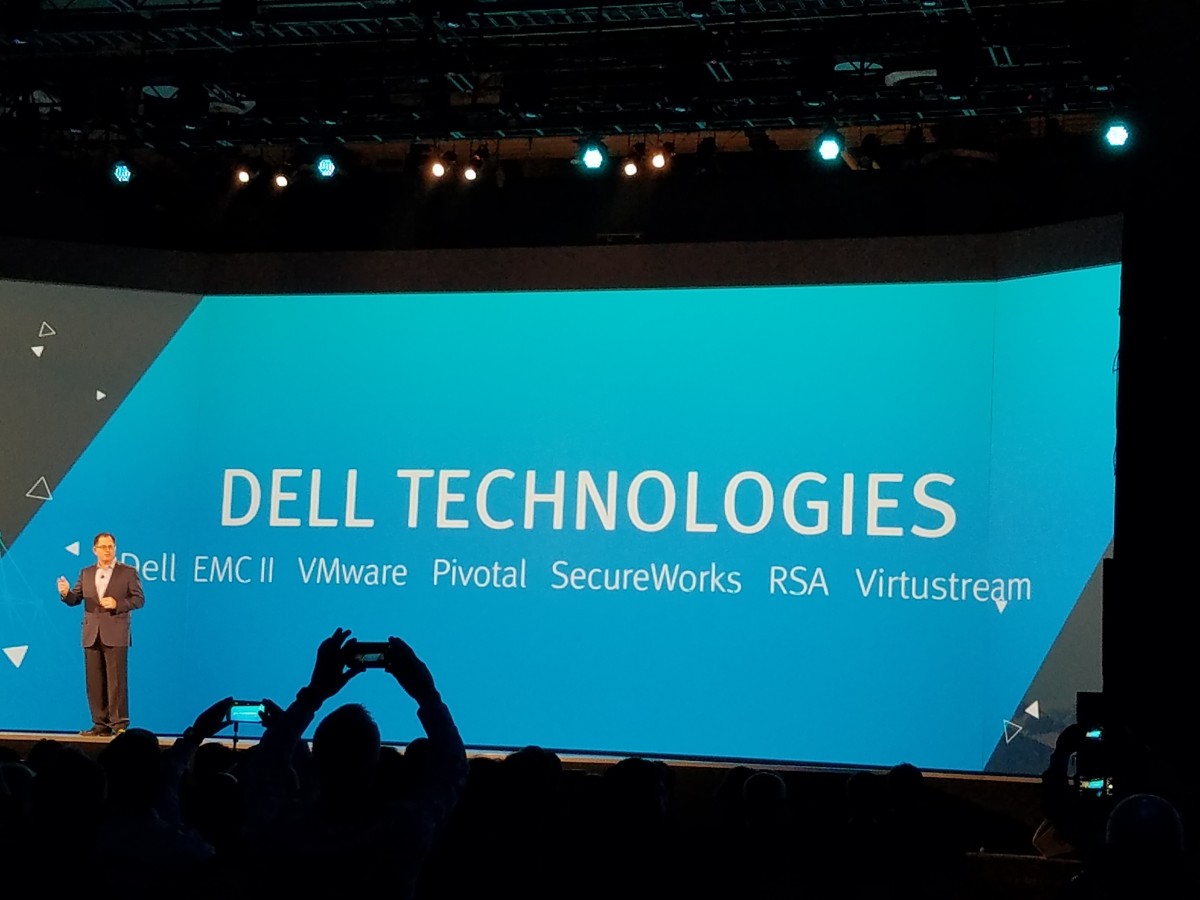 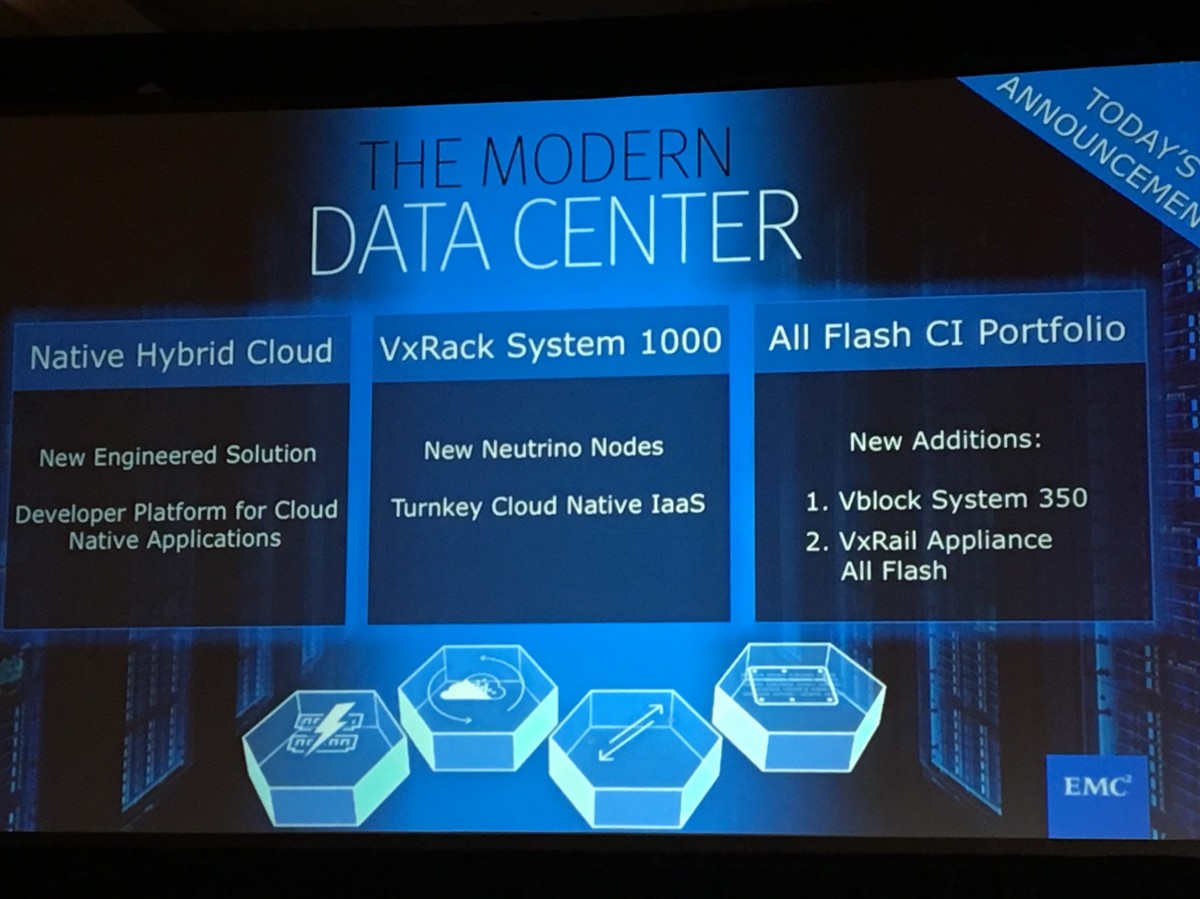 5/ Networking: Cisco Systems still appears to be the networking horse EMC rides or at least until SDN (software-defined networking) kicks in and becomes enterprise-grade and scalable. I’ll really be interested to see how Dell’s networking group fits in as Dell has one of the most unique networking proposition out there. Dell is really driving “open” networking and this is what many shops are looking for.

6/ EMC segmentation: EMC segments IT workloads by needs; performance and capacity and then by deployment method; traditional and cloud-native, and then by implementation; to build or buy. They segment traditional architectures by client-server, scale up apps, shared storage, and infrastructure resiliency and cloud-native architectures into distributed scale-out apps, compute + storage nodes and application resiliency. 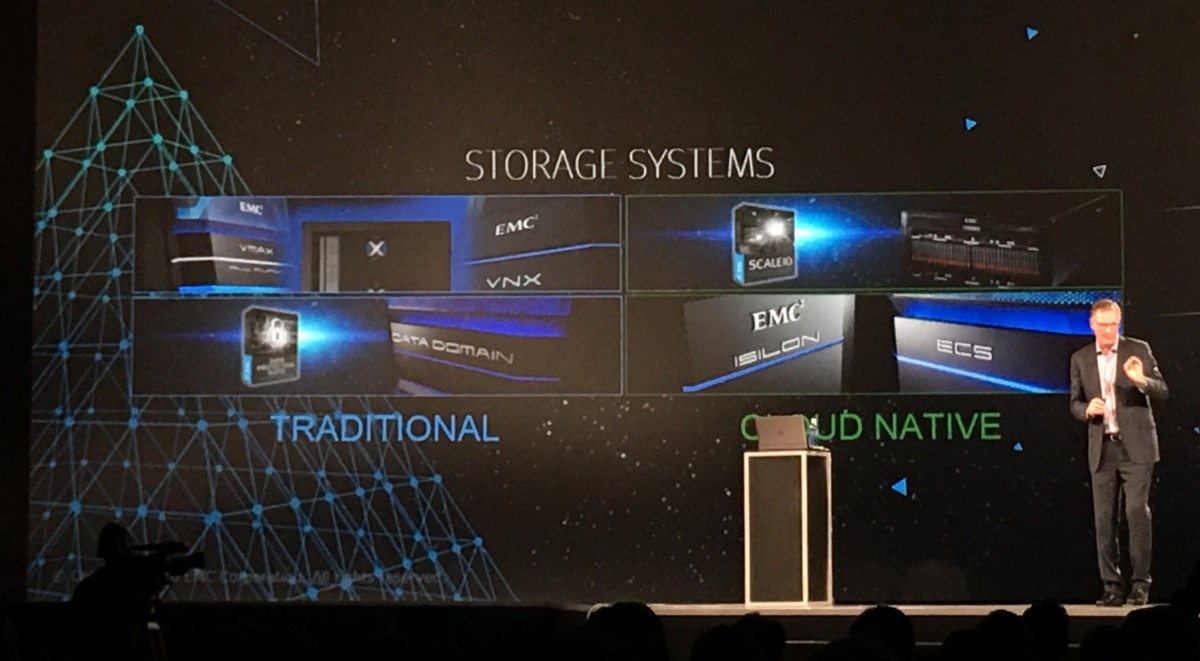 These are reasonable segmentation for the sake of simplicity but then again, I wish EMC would touch on networking, even if it’s not their core. There are also more than build and buy. Also, lines are blurring in the datacenter with hyperconverged, hybrid clouds etc. so a segmentation along these simple lines may be less meaningful over time.

EMC really, really wants to sell you “buy”, meaning they provide a complete system solution for their customers, but could do a bit more to get excited about “build”, where users have the flexibility to choose their hardware configurations and solution stacks. But maybe the “build” is what Dell is for. Other companies like Lenovo and Hewlett-Packard Enterprise are still really excited about “build” and I believe one can have their cake and eat it too.

7/ “Cloud-native”: EMC investing a lot into “cloud-native” software, hardware and solutions. ScaleIO, DSSD, Isilon, ECS, and Nitro are really interesting. VxRack is a very interesting hyper-converged solution that will appeal most to VMware customers but now has the flexibility to run cloud-native stacks as well. The cloud-native Neutrino nodes need more analysis, but I like that EMC is using OpenStack at the core of it. The Native Hybrid Cloud (NHC) platform announcement is an interesting and important move to help make it easy for developers to build cloud-native apps with Pivotal Cloud Foundry using both on-premise and off-premise cloud options.  I’m really interested in seeing what EMC has in store to add full composability, or the ability to swap apps in and out on the fly and to re-allocate the right compute, fabric and storage.

8/ Virtustream: Virtustream is making an even bigger and interesting play into a niche public cloud for SAP and Oracle environments. They announced a new storage cloud service for SAP environments in an area that Amazon AWS or Azure can’t provide yet. I’m impressed also, too, with what looks like a fully composable architecture behind the scenes. I can’t verify that it’s fully composable, but the way it was described it has to be. 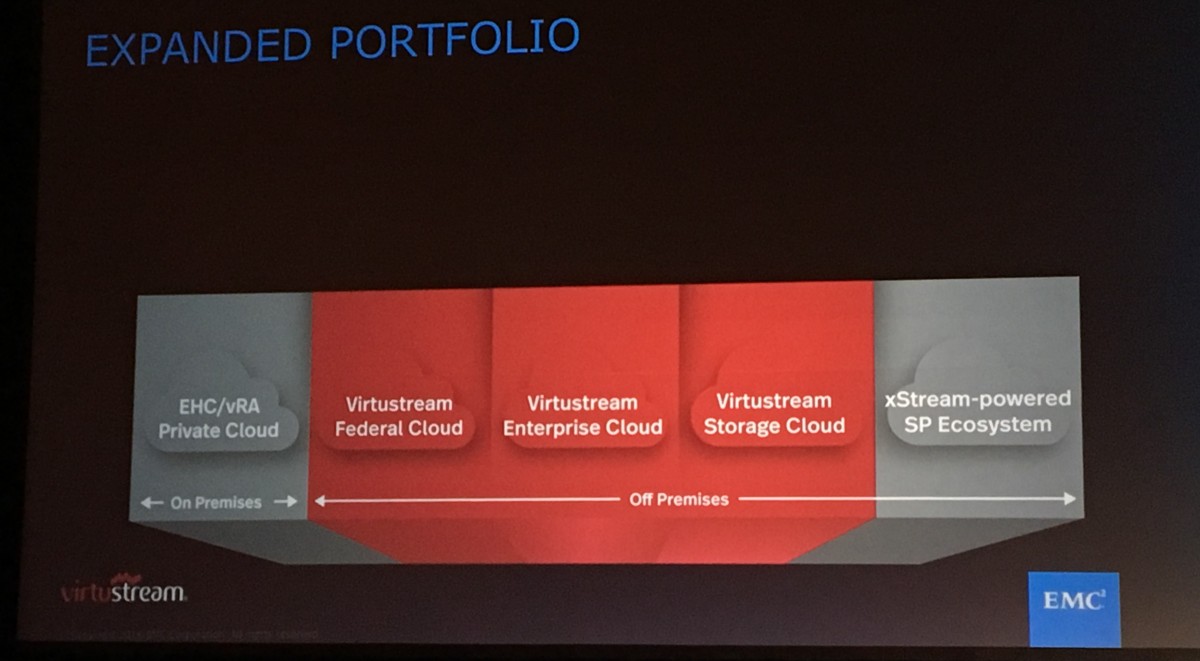 9/ Enterprise storage domination: As you would expect, EMC kept increasing the bar on its storage competitors by upgrading its core enterprise and cloud storage offerings. They improved or added to VMAX, ViPR, Data Domain Cloud Tier, Copy Data Management, EMC Horizon, EMC InfoArchive and then layered on cloud-native solutions like DSSD Dual D5, and Nitro. EMC is really trying to suck all the oxygen out of the enterprise and now enterprise cloud room and doing a pretty good job.

10/ Mid-market storage: EMC Unity looks at first glance as a good mid-market storage solution that would fit very nicely into Marius Haas’s new mid-market business. I loved Jeremy Burton crawling inside Unity and the love and appreciation for hardware should make the Dell folks feel pretty good. Dell loves hardware too. As Dell and EMC combine forces, the teams will need to rationalize their storage brands as there are some big areas of overlap, particularly in mid-tier storage. 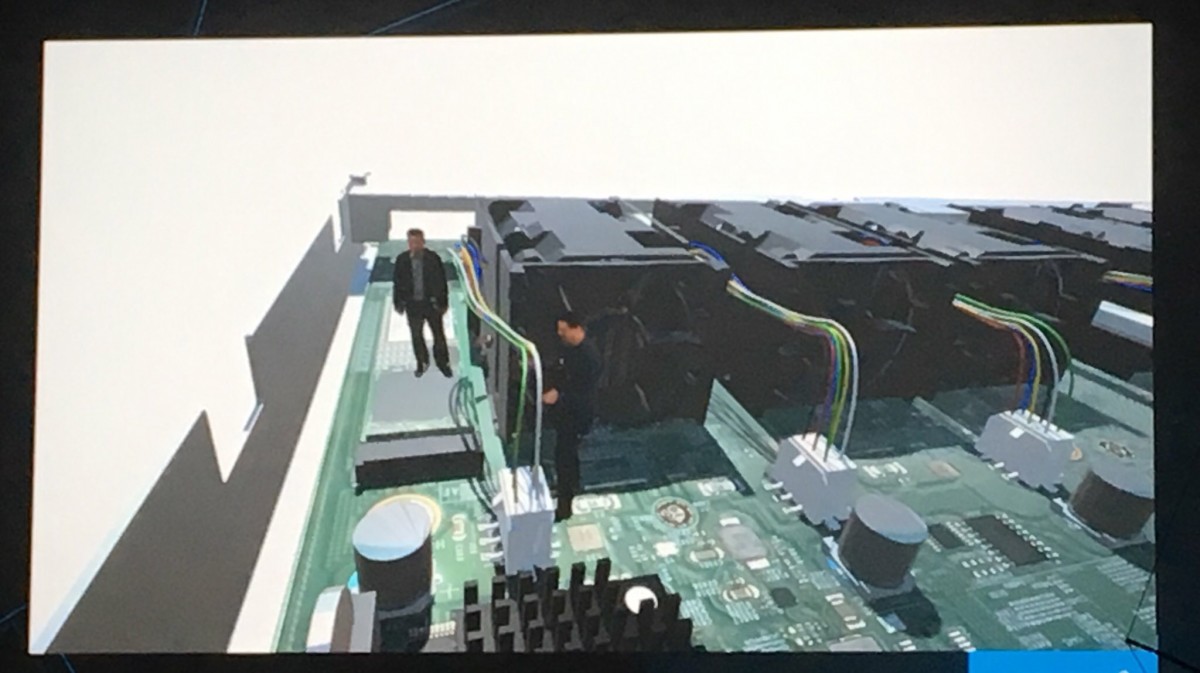 All in all, I thought EMC did a nice job communicating where their customer pain points were and are going to be, particularly across “buy” areas, and I’m impressed so far with the turnkey capability of VxRack. What EMC World also did is show spots where Dell will help EMC in areas like the mid-market, high-volume rack and blade servers, more open solutions from Microsoft, RedHat and Nutanix and of course, in open networking. In addition, Dell’s leadership in PCs and IoT initiatives bring insight into client computing and IoT models that will be key drivers for the datacenter requirements of the future.  I’m looking forward to where the combined Dell Technologies can roll out their combined strategy, but I can infer a lot of it from my experiences at EMC World.