Ever since the Intel Ivy Bridge launched, people are coming out of the woodwork to declare that the discrete graphics 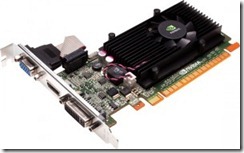 card market is dead, which of course would be negative for companies like NVIDIA and AMD. This is a case of deja vu as I have heard this nearly every year for the last 5 years. Intel Ivy Bridge graphics have made impressive gains in performance, but even Intel isn’t making claims about what this will do to the discrete graphics market. So is this some big conspiracy from people who don’t like discrete graphics? Absolutely not. It is easy to fall into the trap of misunderstanding. And you really need to dig into the details to get a real understanding of what is going on to predict what will happen in the future of discrete graphics.

It helps first to understand the two main types of PC graphics. Modern PC graphics come in two forms today; integrated and discrete. Modern day integrated PC graphics come from Intel and AMD, and are tightly integrated onto the same silicon die as the CPU. These chips share the same system memory as the rest of the PC components and are typically, all things equal, slower than discrete graphics. Discrete graphics are dedicated graphics chips from NVIDIA and AMD that also utilize high-speed dedicated graphics memory. These chips are either soldered on the mainboard, as in the case of most notebooks, or utilize PCI Express cards for desktop, workstation and server implementations.

On April 23, Intel launched their Ivy Bridge processor. The new processor added manufacturing improvements, namely a shrink from 32nm to 22nm and the use of Intel’s Tri-Gate transistor. Intel also added improvements to its general purpose X86 processor cores and added a new media encoder and graphics subsystem. It’s important to note that the entire lineup didn’t convert to a Core i7 with HD 4000 graphics. Here is what we can expect at different price points for the majority of desktop PCs in the marketplace in 2012:

(NOTE: There are some exceptions to the grid above such as the 5255 K-Series, but for the majority of 2012, this will be what you will see in-market.)

I thought the best way to describe the discrete graphics situation was to go after the myths that we all hear.