In my pre-show article, I posed a question: Would Mobile World Congress 2018 (MWC18) deliver on the event organizer GSMA’s promise of a better wireless future? Now that MWC18 is behind us and I’ve recovered from my jetlag, I’d like to offer my recap of the show.

Overall, I believe MWC18 lived up to the hype. By the end of last Friday, some 108,000 attendees including myself had braved the snow and freezing rain to learn about the latest trends, products, and services spanning wireless infrastructure, end devices, and carrier/ operator services. There seemed to be three main focus areas: everything 5G (no surprise there), spectrum efficiency enablement, and ecosystems/partnerships aimed at accelerating future network deployments.

5G, not winter, is coming faster

One of my many Twitter posts during the show poked fun at the famous quote from the smash HBO series “Game of Thrones”—5G is coming and much faster than expected. AT&T announced its intention to deploy 5G in 12 markets by the end of 2018. Executive Igal Elbaz, whom I’ve had the pleasure of speaking with in the past, cited a focus on SDN, virtualization, and edge deployment as key drivers behind the push while at the show. Additionally, T-Mobile announced its plans for its 5G deployment in 30 cities by 2019, and Sprint claimed its use of Massive MIMO will bring “5G-like” performance to six cities as soon as next month. However, all of these announcements were made with the disclaimer that the availability of 5G-enabled end devices will likely lag behind.

At MWC18, I also had the pleasure of speaking with Nicki Palmer, Chief Networking Officer for Verizon. She and I spoke on a number of topics ranging from Verizon’s support of the Super Bowl (if you care to read my article about Verizon’s contribution you can find it here), small cell/ densification and 5G deployment plans. I also learned that Verizon is expected to be the first carrier in the United States to roll out fixed and mobile 5G services simultaneously. That bodes well not only for mobile content consumption but also delivery to the home (for those who aren’t ready to cut the cord and where fiber may not be accessible or cost-effective).
What’s driving this acceleration in next-generation network deployment? One word: infrastructure. At MWC18, stalwart Ericsson announced a Distributed Cloud strategy that promises to accelerate 5G and IoT deployments, improve network performance, and lower CapEx and OpEx by supporting and orchestrating workloads, regardless of location on the network. HPE and sister company Aruba Networks said they would be using their combined strengths to move traditional core network functions to the edge with the aim of improving user experience. This is a tremendous opportunity since video streaming on mobile networks continues to grow exponentially and the need for efficient deployment of 5G services is looming on the horizon. The Chinese giant Huawei announced what it claims to be the world’s first 3GPP 5G chipset supporting a new low frequency 5G CPE. Live demos at MWC18 showed download speeds up to 2Gbps—my only critique was the large footprints of the devices themselves. This is just a portion of what I personally witnessed at MWC18. In my mind, the “all hands-on-deck” approach from infrastructure companies has accelerated 5G development efforts, more so than we saw previously with 4G.

Given the numerous announcements around wireless infrastructure, I was also pleased to see that due diligence at MWC18 was paid to solutions that boost spectrum efficiency. Sprint and Cavium jointly announced at the show an NFV trial aimed at improving network quality of service (something that Sprint has been chided for in the past) and improved operator TCO. I’ve been testing a Sprint Magic Box, and I was pleased to see it earn an award at the show as well. It’s a clever small cell solution that can be installed in a window sill and is mission critical in Sprint’s network densification plans. The carrier plans to expand from its present base of 100K units, in over 200 U.S. cities, to over one million units over the next several years. Huawei also announced the second version of its CloudAIR solution at MWC18. It’s an innovative technology that facilitates spectrum sharing and optimization based on network fluctuations. I attended a media roundtable and learned that Indonesian operator Telkomsel has already commercially deployed the solution and is seeing broadband cell edge improvements. This is clearly a 4G LTE deployment, but it points to the potential to enhance 5G for service use cases such as drone delivery and autonomous driving. Speaking of the latter, at MWC18 I sat in a single seat drone taxi—a joint development between Huawei X Labs and Ehang intended for autonomous deployment in the UAE. One step closer to living out one of my favorite sci-fi movies—Blade Runner! 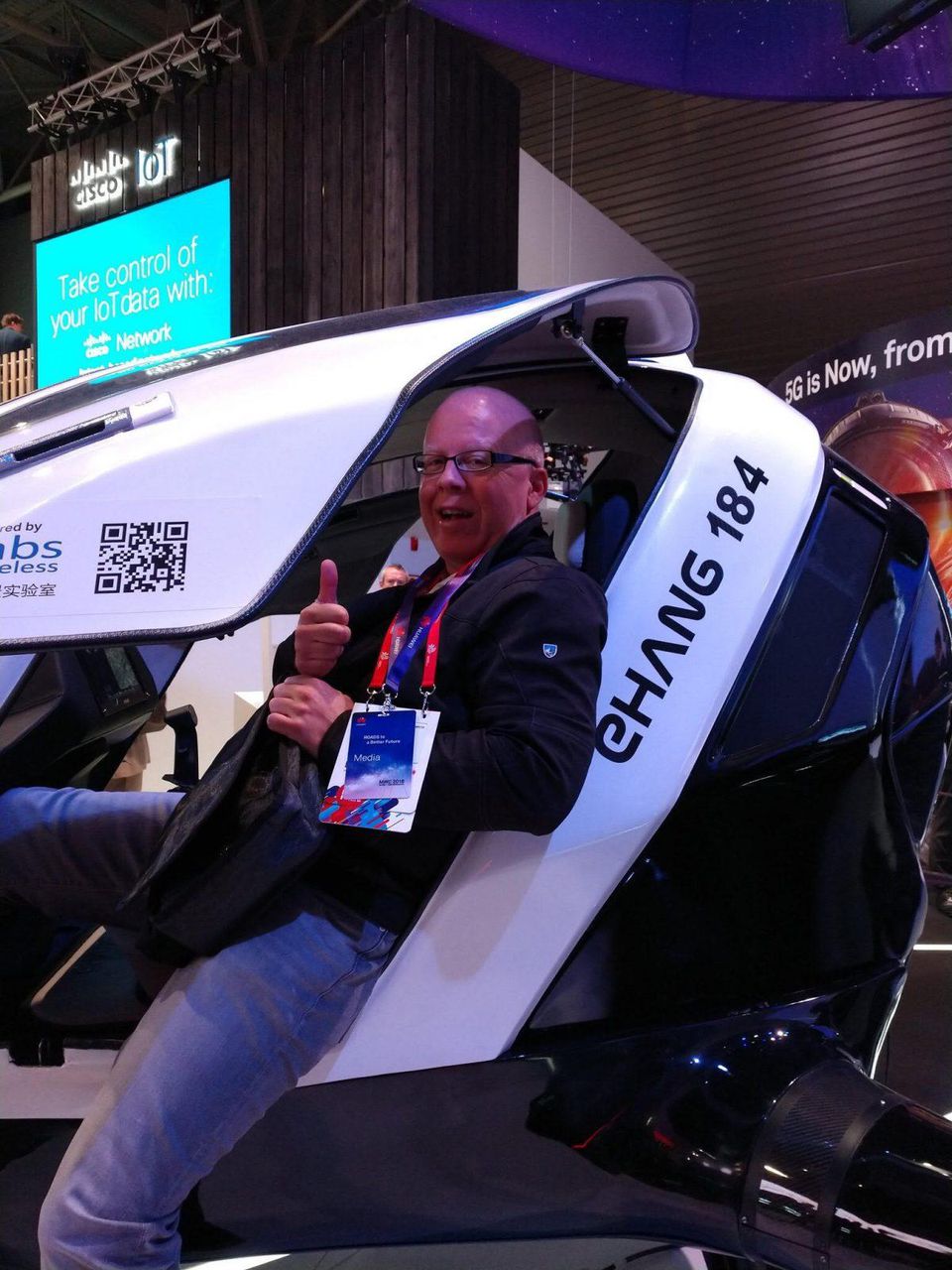 Analyst Will Townsend inside Huawei and Ehang’s drone taxi.

The famous philosopher Aristotle coined the phrase “the whole is greater than the sum of its parts.” There were also many announcements made at MWC18 concerning ecosystems and partnerships aimed at enabling faster network deployments. One prime example was Cisco Systems’ announcement of its “5G Now” initiative to accelerate 5G operator services. It extends Cisco’s path of fostering a more open, multi-vendor approach to both enterprise and mobile networking. The company’s mobile strategy has three core pillars: planning for new 5G services, matching infrastructure to need, and automating to enable better scale, management, and security. An important strategy dovetail is Cisco’s embrace of partnerships to make its vision a reality. For example, Mavenir is lending its expertise through the ecosystem with a virtualized Radio Access Network (vRAN) solution to bring speed, agility, and economy of scale to mobile network deployments. Employing a cloud native architecture, both 4G and 5G deployments can scale and flex without the need to always install hardware. Cisco will always be in the hardware business but having partnerships with SDN-only players like Mavenir will enhance its ability to service carriers and operators globally.

Despite the wet and chilly weather in Barcelona, MWC18 delivered the goods. As evidenced by the wholehearted support of carriers, infrastructure providers and everyone’s willingness to collaborate, 5G is just around the corner.