I attended Minecon 2015 last week in London, which, according to The Guinness Book of World’s Records, was the largest gathering for any single game. Over 10,000 Minecraft players, YouTubers, merchandise sellers, server providers and yes, Microsoft, came together to celebrate all things Minecraft. Beyond attending Minecon to spend “quality time” with my Minecraft-playing son, I had two goals- one to see how genuine Microsoft could keep the game and secondly, to gauge the play experience of Minecraft on Microsoft’s HoloLens.

To understand the significance of Minecon, you have to first understand Minecraft the game. If you’ve had a son or daughter in the last fifteen years, you already know what Minecraft is, either because your child plays it, your child has a friend who plays it, watches YouTube videos on it, or all three. My 13 year old son fits into all three categories. He doesn’t exclusively play Minecraft, but shares time across it and World of Warcraft and Wizard 101.

Minecraft the game is big, really big. Mojang says that since 2011, 70M people have paid for either the PC, mobile or Xbox edition of the game. What keeps players coming back? It’s not fancy graphics, top 40 music, movie star voice overs, and Hollywood direction or movie plots. Minecraft is literally made up blocks, 1980′s game music, has no voices, no plot or slick directing. Players literally mine, build, explore, destroy and kill. That’s what they do, for hours upon hours. When they’re not playing they’re watching others play it on YouTube. If they get bored they can just join a different server with different rules and scenery or install “mods”. There are literally an endless amount of mods. Want to turn your character into Han Solo? No problem. Minecraft is available on to play pretty much on any device be it game console, PC, phone, tablet. Confused? I was, too.

Hopefully you can see how easily it would be to mess up an experience or brand like Minecraft. You see, a lot of the innovation is community developed and it would be so easy to turn off a community like that. So when Microsoft bought Minecraft for $2.5B in 2014, it would make sense that some players, server providers and mod creators worried about what Microsoft could do to the game. To make matters worse, “Notch”, Minecraft’s founder, went public with his displeasure for Windows 8 in 2012 saying he would never certify it. Microsoft paid Notch, Mojang and other investors $2.5B in 2014 and the community really hasn’t heard from him officially since. Would Notch’s departure matter and would it be felt at Minecon 2015? Thankfully, no.

At Minecon, Microsoft didn’t “corporatize” Minecraft too much. From a branding standpoint, there was little discussion or even use of the word “Microsoft”. The head Microsoftie on stage, Lydia Winters, from Mojang, even thanked Microsoft for their support, which was kind of ironic because she is technically from Microsoft. Microsoft logos were only evident in the Microsoft booth, even though Microsoft owns the entirety of Minecraft. The announcement of a U.N. educational project and a Mattel licensing deal and app was very corporate and so much like Microsoft. When I heard this at the keynote I said to myself “uh-oh”, but thankfully it didn’t override what many consider the “real” Minecraft. This is part of Microsoft “mining” their $2.5B investment. 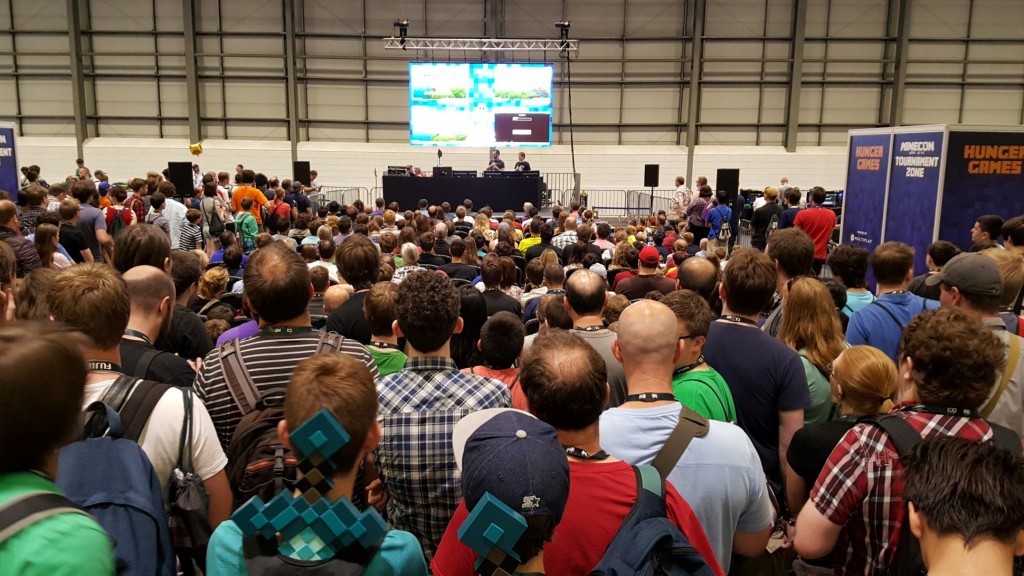 Microsoft also announced a Windows 10 Minecraft Beta Edition that costs $10, one-third the cost of today’s desktop version at $29.99. Minecraft for Windows 10 isn’t technically a universal app, but can be used on any Windows 10 PC, tablet, phone, HoloLens and Xbox. The code I played on a desktop used the Pocket Edition but I was assured this would be upgraded later on and players wouldn’t lose desktop features they appreciated.

When asked if the Windows 10 version means Minecraft won’t be supported on OSX, iOS, and Android, Microsoft told me they would. What’s not clear are which platforms will be there first with new features but you have to assume it’s Windows. By sharing the same code between five Windows platforms, users do get the benefit of having touch, game controller and keyboard supported on every Windows platform. If there were more Windows tablets and phones out there it would, in particular, help out those on Pocket Edition as they can now get the full-featured Minecraft now. I’m also assuming that the new Minecraft for Windows 10 will fully integrate with the Xbox Game Center in Windows 10.

Then there’s Microsoft’s HoloLens. I haven’t been shy in my admiration in what I believe to be the best approach to a face wearable to date.  I was one of the first outside of Microsoft to use HoloLens in its infancy that literally required the device to tether to two giant PCs and took two handlers to operate. I didn’t attend BUILD to use the next iteration, but given at E3 Microsoft announced it was showing off MineCraft for HoloLens, I wanted to make sure I used the latest.

Still in place was the no camera rule. Gone was the harness, two PCs and two handlers. I was using HoloLens, the device, with all its processing done on-board. Microsoft’s Saxs Persson walked me through two use cases. The first one was where I was playing Minecraft on the wall on what I was told would be equivalent to an 80″ TV. As I got closer I could look in and around it, too as if I were really inside Minecraft. I used a combination of voice commands and an Xbox controller. The second one was where I was playing in 360 mode on a table. I could walk around the table and literally see the map in what would be considered real life. I could see underneath and get a cross section of the earth, too as well as initiating lightning strikes with the use of hand gestures and voice commands. I could zoom in and out and initiate follow mode with voice commands.

I was very impressed and my son, an avid Minecrafter had one word, “awesome”. I never prompted my son about the “field of view” discussion, but when I asked my son what Microsoft could do to improve the experience, he said “see more”. This was code for the desire for an expanded field of view, and what was meaningful to me was that he had never heard of the controversy or never used rev 1 in Redmond as I. I personally didn’t have an issue with the field of view, but it appears some could.

All in all, Microsoft played their cards right at Minecon. If they continue to adhere to some strict brand management philosophies, encourage the community to be creative and only cross the Minecraft-Microsoft streams when beneficial, they could have another multi-billion dollar franchise on their hands that doesn’t conflict with others like Halo. Minecraft for HoloLens made a most impressive demo and they have a ways to make it a real game that can be played for hours on end. The good thing is that kids learn quickly and aren’t afraid to make mistakes, which is exactly what you’ll need to master HoloLens with the new voice and finger commands.