Today, Michael Dell announced in San Francisco at Oracle OpenWorld that Dell and Oracle are once again deepening their business relationship.  I will outline what these announcements are below, but the most interesting thing about today’s announcement is about what this could mean in the future.  It seems that with every successive Dell-Oracle announcement, the relationship gets deeper and wider.  Oracle and Dell just announced a few months ago that Oracle named Dell a preferred x86 partner, and Dell has named Oracle a preferred enterprise infrastructure partner. With IBM and HP not such good allies with Oracle, this could end up being very good for Dell.  We have written an position paper here if you want a deeper dive, but I have summarized below. 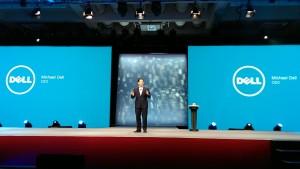 The first Dell announcement is about the software that Oracle uses to manage databases, apps (Oracle Enterprise Manager) and Dell uses to manage hardware infrastructure (Dell OpenManage).  Today, if you are managing an Oracle database and apps installation on Dell or any other hardware vendor, you have at best two different consoles to manage the health and the optimize performance and efficiency of the total system. Best case you have one console for the hardware and one of the software. Sometimes you will have four consoles if you have separate server, storage, networking, and database.

Dell announced today that it is integrating its OpenManage inside of Oracle’s Enterprise manager.  This gives IT the ability to more easily optimize the Oracle database and apps with Dell infrastructure.  With one integrated console, IT can pinpoint exactly what is happening with the hardware and software and take corrective or optimal action.

Converged infrastructure is the industry term for the melding of server, storage, networking and software in one package so everything works well together.  Traditional datacenter infrastructure isn’t like PCs or tablets that come completely ready to roll out of the box, it’s more like a rack of home theater equipment from different vendors.  It takes IT a lot of work to get it up and running.  Converged infrastructure is an integrated approach designed to make life easier for IT in that they get a near-complete solution fork-lifted to their datacenter that works right out of the box. Dell calls their flavor of converged infrastructure “Active Infrastructure”. Dell announced today that they will be offering Active Infrastructure for Oracle Linux (the operating system) and Oracle VM (virtual machine).  This means Dell can install an entire integrated Oracle solution, fully optimized and tested, directly to IT’s datacenter.  Dell will also directly take the order, even for the Oracle Linux and VM, as well as first-call support.  This is a very unique and differentiated way of working with Oracle, and demonstrates the trust the two have for each other.

DBA’S are the folks in IT who develop and keep databases performing well, and Dell is bringing them some new goodies, too. Dell’s “Toad” or “Tool for Oracle Application Developers”, was updated for Oracle’s latest and greatest database, 12c (cloud), and for the first time ever, got Mac support. Dell acquired Toad through their purchase of Quest last year and is looked at as the de-facto Oracle DBA development and management tool.  Dell also updated SharePlex, its data replication tool, for Oracle 12c database and also enabled a connection to Hadoop environments through SharePlex Connector for Hadoop.

If it isn’t already apparent, Dell and Oracle are getting closer with each announcement.  Dell brings to the table things that Oracle doesn’t have, like a high volume and extremely competitive X86 server platform, superior networking and very competitive storage capabilities.  So what’s in it for Dell? Oracle brings to Dell potential access to 80,000 enterprise customers. And enterprise is the area where Dell’s detractors criticize the company the most. So what does this mean for the future? The next major step that would make sense would be a deeper integration of Dell infrastructure into Oracle’s Engineered Systems, specifically for Exalogic and Exalytics Systems, pre-installed with not just the Linux OS and VM, but applications.  This would certainly disrupt the enterprise cart.

I also expect Dell to extend their approach to the management of more heterogeneous computing environments. Think of IT managing different vendor’s infrastructure from a single pane of glass. This reminds me of the rack home theater approach where you need a different controller for each piece of the rack with different brands.  In the case of converged infrastructure, I could see Dell offering the universal remote for other’s converged infrastructure.  This could help reducing the chances of s “rip and replace” scenario which IT dislikes. Again, this is my speculation, but if they do this, it would be a very unique approach and very differentiated. We have written an position paper here if you want a deeper dive on the announcement.

Whatever you take away from these announcements, it portends to a very close future between Dell and Oracle.