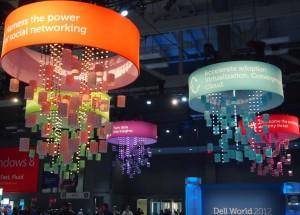 and candid look at Dell’s transformation from PC assembly to global services and solutions.  Where most corporate conferences focus on selling what’s in or about to enter the sales cycle, Dell World focused on telling Dell’s story for the rest of this decade…no easy feat.

In addition, the Dell World Solutions Showcase was in many respects a partnership event that they exposed to customers.

Dell has identified five key industry forces as being critical for its long-term success; they are five hugely important trends for the rest of this decade and beyond.

Dell’s key differentiator here is the message that IT transformation is really modernization. 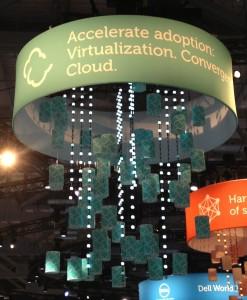 They staked out proactive positions on several key areas.  The first is Dell’s de-emphasis of a protracted IT “convergence.”  This is the heart of their modernization push, the idea that slow transformation of IT services means becoming increasingly less competitive.

They delivered a strong message of immediacy toward continuous services, as opposed to the usual IT language of delivering assured “uptime.”  What used to be called high availability is now becoming commonplace in cloud services, but it is being done with a new generation of low cost, power efficient hardware running new software stacks.

Dell is betting big on open systems-based choices for systems software, provisioning and management, and are investing internally in OpenStack.  They have listened to their cloud customers’ message that the open interfaces between layers in these new software stacks are key drivers for boosting operational efficiencies and reducing costs.  And that is key to the idea that scale matters – that there is a place for cloud services for customers who cannot achieve scale, and that cloud services are a partner for IT.  Dell is building its own cloud capabilities, and plans to leverage its own scale to help smaller customers bridge to larger services. 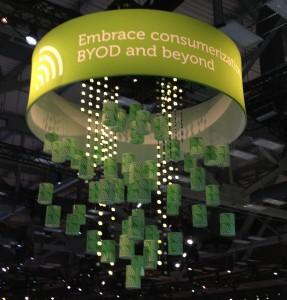 Everyone is talking about “bring your own device” (BYOD) and its substantial impact to IT policies and resources.  To Dell, there is much more to workers bringing their personal device into work than the physical device.  They are bringing their device, their data, their viruses, their apps, their open ports, their cloud services, etc.  BYOx is more to point of employees bringing entire digital ecosystems to work with them.

Dell is taking a holistic approach to solving the BYOx, addressing the devices, the data, the infrastructure, and the application development. Dell is leveraging no less than five of its major IT acquisitions to do this including Wyse, SonicWALL, KACE, SecureWorks, and Quest, as well leveraging their 30 years in the device market. 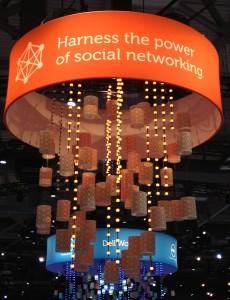 awards to show for it.  I’m not talking about being the best social broadcaster.  Instead, Dell has demonstrated they are superior listeners who are able to activate the insights derived from listening.  This includes impact to product roadmap, design and of course support. Because Dell developed a competitive and large social media core competency for Dell, customers started asking them for help and the business opportunity soon became apparent.  A “tiger team” got together and transformed it into a full business.  Dell Social Media Services now offers full-fledged consulting services for social media and is actively servicing major customers seeking help with their social media strategies, planning, and even execution.

They’ve also lit up Tech Page One, a technology news aggregator that is not limited to discussing Dell technologies.  It’s somewhat of a novel concept at this level of play, and the staffers at the Tech Page One booth were zealous about their mission. 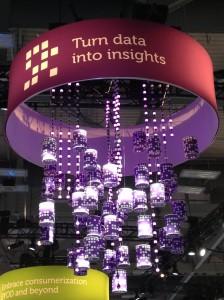 BYOx and social media are on their way to generating zettabytes of data – the patterns contained in that data describe a lot about consumers and therefore have a lot of value.

Dell’s challenge here is how it competes with the likes of IBM, who has been developing expertise in artificial intelligence and analytics for decades, and HP, who is investing billions of dollars in acquiring relevant resources and experience.  Dell’s competitive approach is elegantly simple – do not reinvent the wheel, instead acquire talent and partners who are using publicly available software systems.  Following the cloud, Dell is strongly supporting open systems and tools in pursuit of big data.

Dell is becoming an expert in open source big data analytics techniques and tools, and is building the cloud resources needed to bootstrap big data projects for small and large customers.  This is an impressive business vision in its own right. 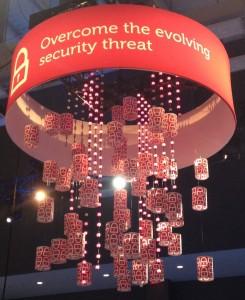 across Dell’s customer base is a big data project, and they claim that SecureWorks has already processed 35 billion security “events.”

Their SecureWorks based services tie client end-points to networks, to applications and data in the cloud, and to integrated monitoring.  And to additionally differentiate from Intel, Dell enables customer choice in endpoint malware and antivirus solutions.  Again, it is an impressive focus on the core of end-to-end security without wandering off in the weeds and trying to own all of the pieces and lock customers into proprietary product ecosystems.