With the advent of Microsoft’s Windows 8, computer makers developed different form factors to take advantage of the new operating 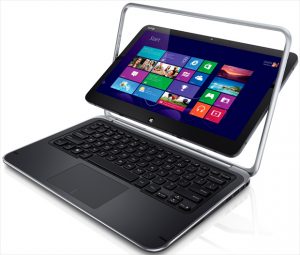 system.  Most of these new Windows 8 form factors were shown for the first time atComputex in Taipei and then at the official Windows 8 launch event in New York.  The new PC form factors extend the functionality by taking advantage of touch screen and the Windows 8 Metro interface.  Consumers and businesses can now choose from a myriad of innovative form factors: hybrids where the tablet disconnects from the keyboard, convertible flippers, convertibles that flip 360 degrees and large, portable displays that are carried from room to room.

One of the best of these new devices is Dell’s XPS 12 Convertible Touch Ultrabook.  I have been using it for nearly a month as my primary notebook and wanted to share my experiences.

Ultrabook First, Tablet Second
The XPS 12 is an Ultrabook first and a tablet second.  This is important to understand, otherwise you may fall into the trap of comparing this to a tablet-only device, which would be a big mistake.  The XPS 12 operates as a tablet secondarily through the use of a very innovative flipping hinge, which allows the display to swivel back when you want to use it as a tablet, and swivel back when you want to use it as an Ultrabook. It also enables what I like to call “movie-mode” where the display is at the front and the keyboard is hidden but acts as a great stand.
The swivel display frame is very durable, regardless of what you may read elsewhere.  When you swivel the display into place, it emits a very robust “click”, which comes from magnets all around the frame. One thing that impresses the engineering side of me is that ability to deliver power, display and touch signals signals over a moving swivel mechanism.  Dell has added a few other details to improve use as a tablet.  Dell changed the power button from a bezel button to a side slider which enables the user to turn on the device in any form factor, Ultrabook or tablet, and keeps it from accidentally getting pressed when used as a tablet.  One other comfort feature that I only noticed after a week of use was that the rubberized “feet” act as great place to put your fingers when using as a tablet.
Industrial Design
The XPS 12 pulls from the design language of the entire XPS line, which looks premium but also very functional and durable.  The lid and bottom are both made from carbon fiber, which is not only durable and very light, but cool to the touch. The metal frame is machined aluminum, which is very sturdy and looks great.  The palmrest is made from magnesium, covered with black, rubberized material that is gentle on the eyes but also keeps your palms from slipping like mine does on my MacBook Air (MBA).  Like other notebooks made with machined aluminum, the XPS 12 is a bit heavier than some other Ultrabooks, but I personally like that trade-off  And at 3.35 lbs, it’s lighter than the MacBook Pro (MBP) 13″.
Beautiful 1080P Display
The XPS 12′s display is gorgeous.  It is 12.5″ with brightness up to 400 nits and at 1,920 x 1,080 resolution.  It’s made from bonded Gorilla Glass and therefore bright and durable.  Pictures and movies looked incredible.  This delivers a much higher PPI (176) than a standard 13″ MBA  (127) and less than a 13″ MBP with Retina Display (227).
Base Specifications
While thin and light, my XPS 12 came with relatively robust features:
All of these specs were very solid, but I would have appreciated an option for discrete AMD or NVIDIA graphics to play some higher level games and take advantage of programs that use GPU compute.
Apple MacBook or Dell XPS 12?
Ultimately, consumers must make a choice and in many cases, Apple and Windows Ultrabooks will be in the consideration set. If, and I mean “IF” the consumer is neutral on an Apple versus Windows 8 ecosystem and purchase experience, here are the things they should consider:
Net-net, it is great consumers have such great choices with laptops and Ultrabooks.
Dell XPS 12: Windows 8 Ultrabook Re-imagined
As an industry analyst, I don’t publicly publish many product evaluations, but with the Dell XPS 12, I thought it was important, given its unique design and new usage models it enables.  As an Ultrabook, the XPS 12 was one of the most solid devices I have ever used.  It’s fast, light, thin, sturdy and Dell has paid great attention to details in form and function. As a tablet, I enjoyed it a lot better than I ever expected, and this is coming from a long-time iPad user.  I found myself using the XPS 12 on the couch propping it on my lap and even in bed in “movie-mode” where I historically used my iPad.  It doesn’t replace my iPad or Nexus 7, but I could see using my Surface a lot less.
Dell has a real winner with the XPS 12 and I applaud their courage for developing and productizing such a unique convertible, shape-shifting Windows 8 device during such turbulent times in the PC industry.