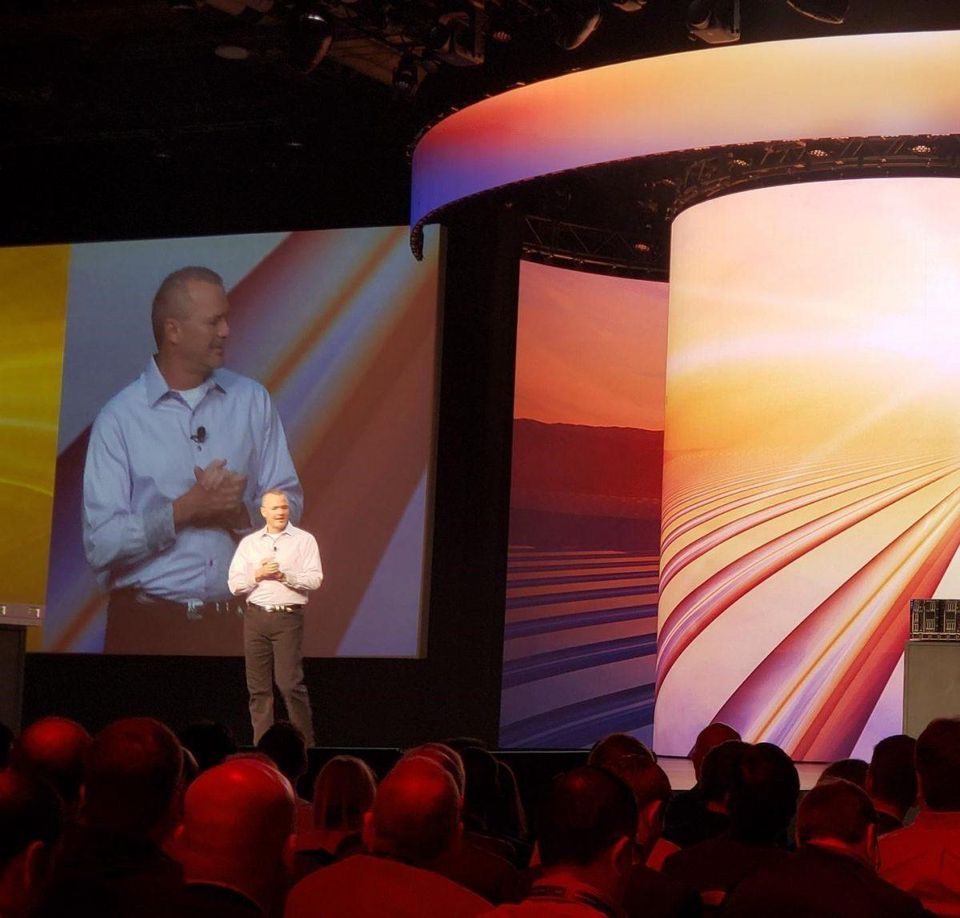 As I wrote yesterday, this week I am attending Dell Technologies World 2018 in Las Vegas to get a look the conglomerate’s overall vision, and to see what new products and solutions it has in store for its customers and partners in the coming year. Day 1 of the event was mostly a stage-setter for Day 2, but we got to learn a lot about Dell’s interconnected partner ecosystem (see my Day 1 write-up here if interested). Day 2, on the other hand, was all about the meat and potatoes. Here’s a rundown of all the new products and services launched on Day 2, and my quick take on them.

Last year at Dell EMC World, I had commented that I would have liked to have seen more from the company talking about AI and ML given how much discussion the public cloud providers and core ML IP companies were having.  Dell is a company who actually needs to explain this deep tech to a real customer- it’s not hypothetical.

This year, Dell leaned into AI and ML. To meet the data and performance demands of the machine learning “age,” Dell unveiled at the event two powerful new additions to its 14th generation Dell EMC PowerEdge server portfolio: the PowerEdge R940xa and the PowerEdge R840. Dell says these servers were designed specifically with ML workloads in mind, with Intel Xeon Scalable processors—up to 112 processing cores—and up to 6TB of memory, with NVDIMM options. 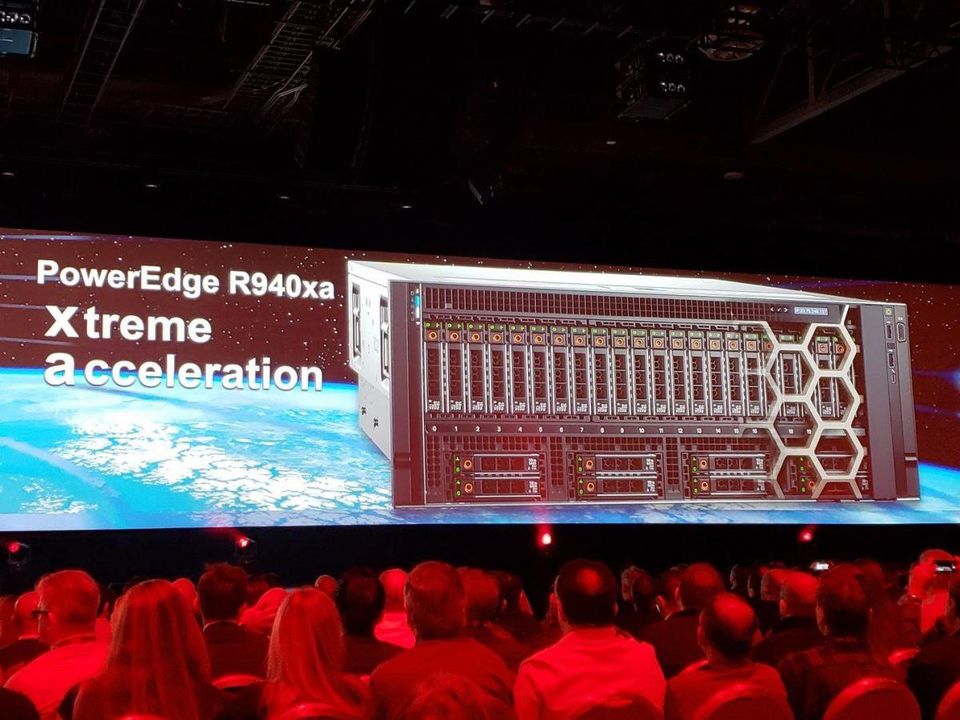 The PowerEdge840 was designed specifically for database analytics, while the 940xa is geared towards accelerating databases for business-critical applications like SAP and machine learning. The PowerEdge 940xa brings some real acceleration, as well as SAP beast mode to the party: 4 Intel Xeon CPUs, 4 GPUs, 8 FPGAs, and 32 flash drives. This is not a server to be messed with. Server analyst Matt Kimball will do a deeper dive on this later. Dell EMC had an outstanding 40% server revenue growth last quarter based on YoY comparisons and it said that this was in part due to richer configurations with GPUs. These new systems are pricey and I will be interested just how far this can drive ASPs and revenue. 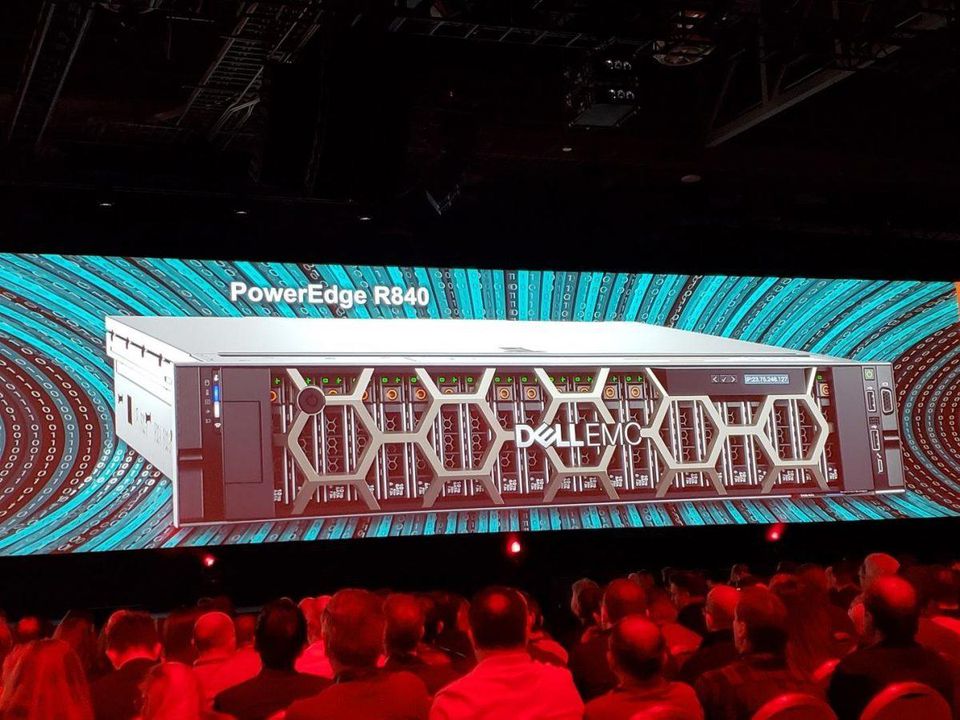 Additionally, Dell EMC launched its next-generation PowerMax storage solution, designed with end-to-end NVMe, and equipped with a machine learning engine. This product looks quite beastly as well—all-flash, 10M IOPS, SCM (storage class memory)-“ready,” and based on VMAX. The predictive analytics aspect sounds interesting, to say the least, purportedly capable of making 6 billion autonomous decisions based on 40 million datasets, per day. Dell is touting it as the world’s fastest storage array. Storage analyst Steve McDowell will do a deeper dive on this later, and I’ll be interested to see how this stacks up with Pure Storage AI-optimized FlashBlades. 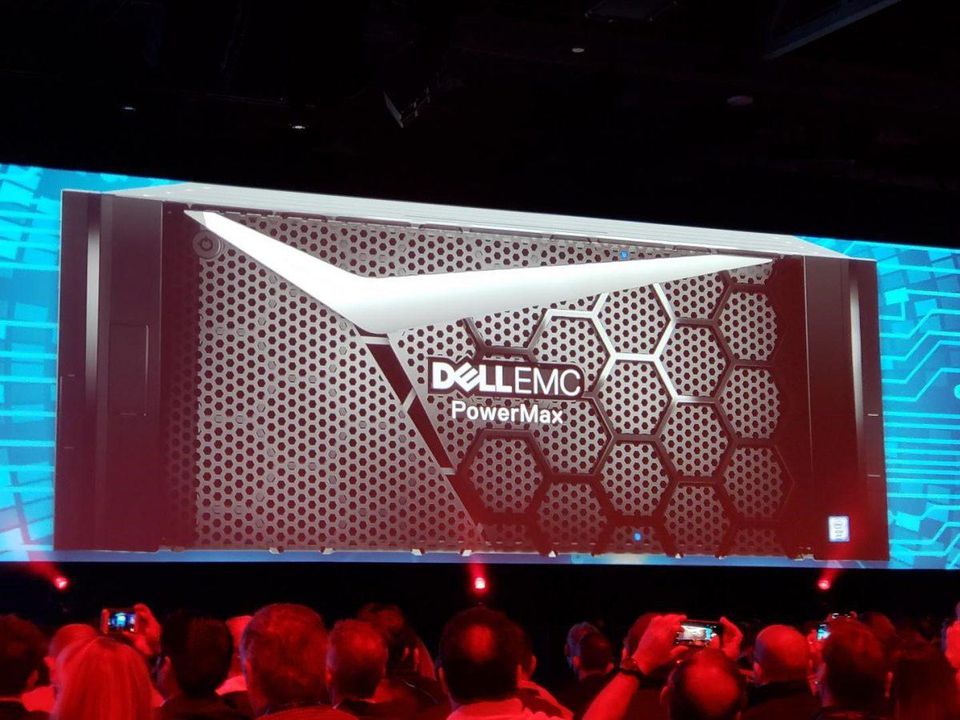 Dell also announced that it would be deepening its relationship with Intel with its Dell EMC Ready Solutions offering, a PowerEdge 4740-based comprehensive hardware platform and software solution that Dell says will improve performance and deployment by utilizing Intel Xeon Scalable processors and Intel FPGAs. In addition to this new product, Dell EMC also announced it would be joining Intel’s AI Builders program, and that it was partnering with Intel to enable their customers to benchmark HPC and deep learning workloads on Intel Xeon processors and FPGAs at Dell facilities. It goes without saying that Dell Technologies and Intel is a historic pairing that has been in play for 30 years. It appears Dell EMC is “all-in” with Intel on AI, but don’t take this that Dell EMC will not also work with NVIDIA, Advanced Micro Devices, and Xilinx. Dell executives went out of their way to explain this when I asked.

The last AI announcement was the new Dell Precision Optimizer 5.0, a solution that utilizes artificial intelligence to automatically adjust and maximize the performance of applications running on Dell’s Precision workstations. This is a great example of how Dell is integrating and utilizing AI to improve products across its portfolio and I am having meetings today to get more information on this to separate the facts from the marketing.

Hyper-converged infrastructure continuing to grow
When it comes to hyper-converged infrastructure, Dell EMC takes the cake. It is the number one market leader in system sales, after an impressive 145% growth in worldwide revenue in 2017. Now Dell EMC is seeking to build on that growth with several new advancements to its portfolio announced at the event. First, a slew of new capabilities is coming to Dell EMC’s VxRail (the company’s top-selling HCI offering), as the company continues to integrate VMware vSan and vSphere software into it. These advancements include NVME cache drive options, Intel Xeon Scalable Processors, NVIDIA Tesla P40 GPU accelerators for ML inference, and 25 GB/second networking connectivity, to name a few.

The second area of updates center on the Dell EMC VxRack SDDC, the turnkey cloud platform that Dell refers to as “the ultimate infrastructure foundation” for multi-cloud solutions. New enhancements to the VxRack SDDC include more powerful configurations based on the 14th Generation PowerEdge servers, support for NVIDIA graphics processing, the new VMware Cloud Foundation 2.3, and SDDC automation and serviceability extensions integrated into the VMware Cloud Foundation. I’m expecting analysts Matt Kimball and Steve McDowell to dog deeper into this in the next week. I will be interested to see if these new offerings can move their HCI market dominance even farther.

In VDI, Dell unveiled its new Dell Wyse 5070 thin client, which it is calling its “most versatile and scalable” thin client platform. The company has a point with this claim given support for four, 4K displays running simultaneously and configuration capabilities. The Wyse 5070 boasts over 1,600 factory configurations, which Dell says will enable its customers to find the best solution for their workforces without over-spending or over-equipping. In a pre-briefing last week, the company said customers were excited as the 5070 can replace six different models, meaning an enterprise can take one model based on use case and user profile, not six. This simplification helps Dell, too, from a supply chain standpoint. 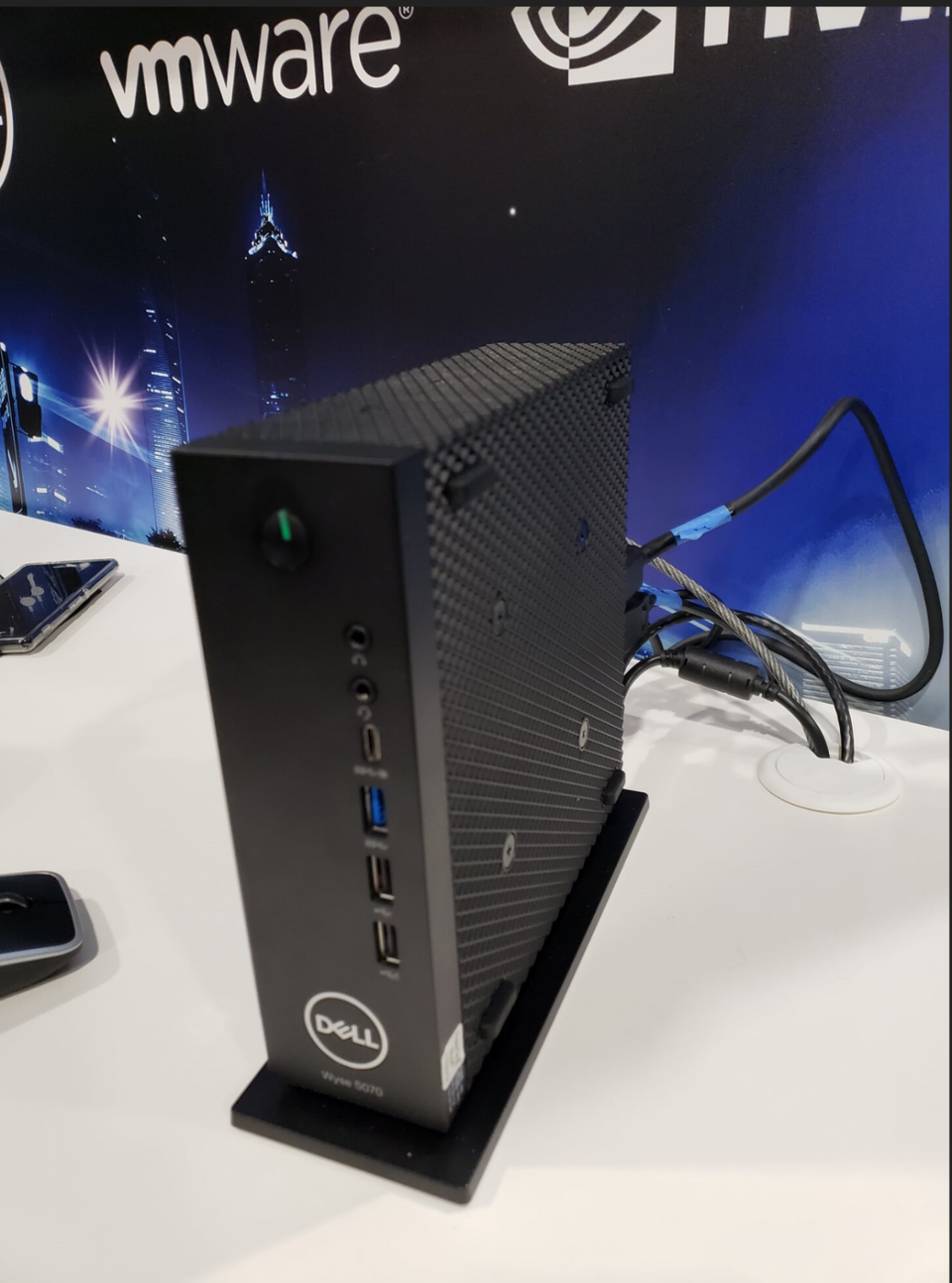 The 5070 can be installed in either a Citrix, Microsoft, or VMware virtual workspace, and customers can choose between Dell’s Wyse ThinOS or ThinLinux operating systems, or Windows 10 IoT Enterprise. It comes equipped with true 4K graphics support and an impressive array of connectivity options. The whole thing is managed through Dell’s advanced Wyse Management Suite. The 5070 replaces high-end systems and will sit beside the 3040, which I wrote about here, in the mid-range.

Also announced at the event was that Dell EMC VDI Complete Solutions now supports Dell’s 14th Generation PowerEdge server infrastructure, based upon Dell EMC VxRail and vSan Ready Nodes. VDI all starts at the data center as it is doing most of the computing for the VDI endpoints and sends it a literal video of what it is working on. Additionally, Dell is adding NVIDIA Tesla 940 GPUs and Quadro virtual Data Center Workstation software, which will better equip VDI Complete Solutions for professional, workstation-class workloads. To top it all off, VDI Complete Solutions features the new Wyse 5070 I just mentioned above, enabling four, 4K displays which widens the market potential for VDI.  I see these as great enhancements to Dell’s VDI portfolio, and I think they will do much to simplify and speed up adoption of VDI technology. 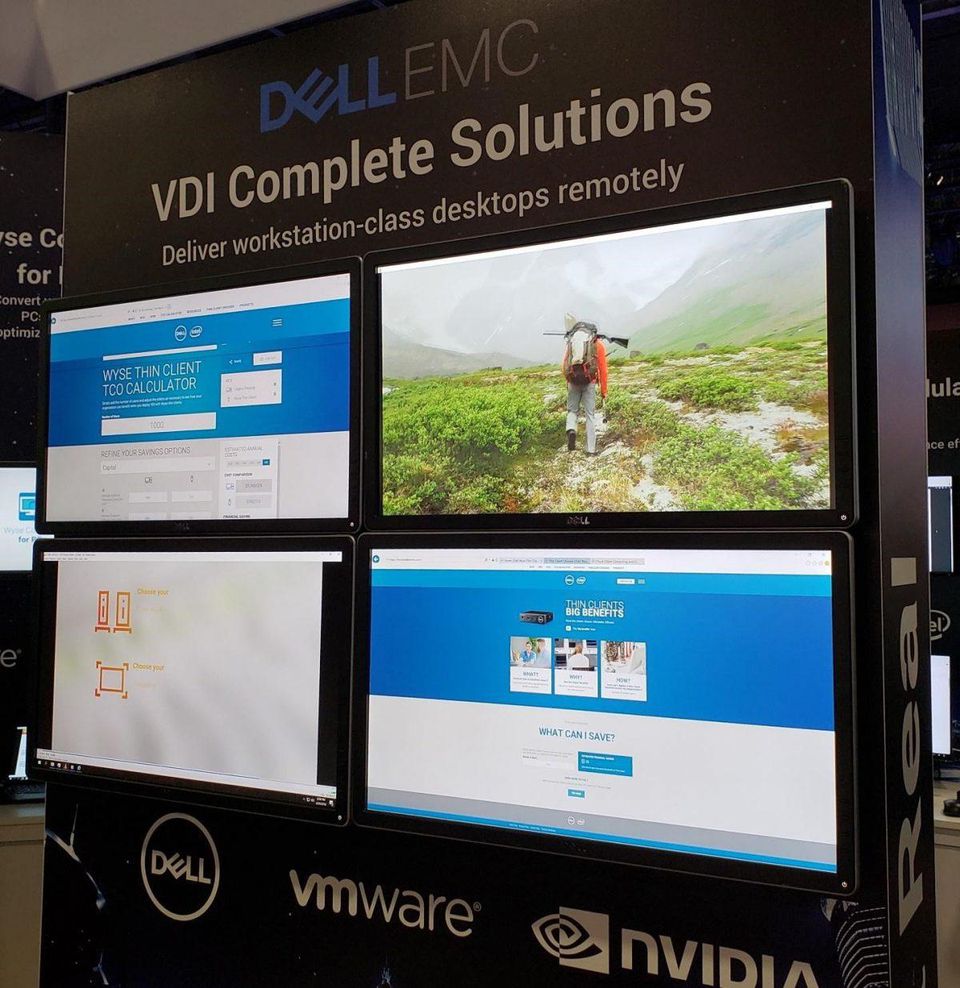 Catching up with VMware

One announcement I missed in yesterday’s coverage was VMware’s big unveiling of its new Virtual Cloud Network, the company’s foray into networking. VMware describes the Virtual Cloud Network as a “digital business fabric” that will securely connect users, data, and applications. This is market-speak, but actually is spot-on. 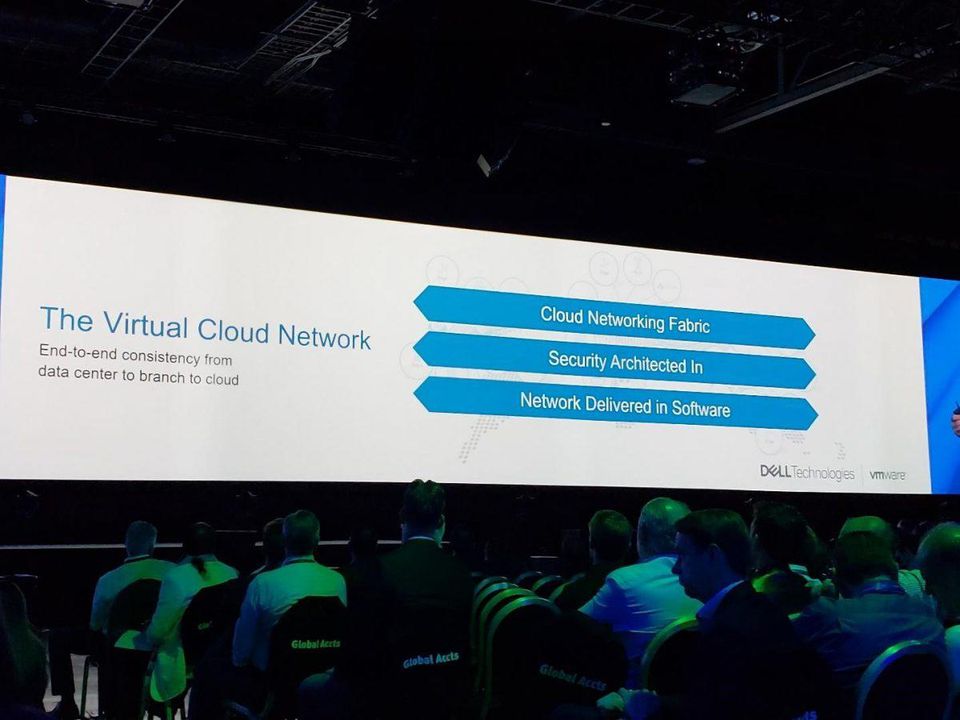 My biggest takeaway here was just how serious Dell Technologies is with software-defined networking going forward. It was one of the missing puzzle pieces for me as Dell EMC does so well in software-defined storage and of course, server virtualization.

This concludes my coverage of Dell Technologies World 2018. Day 2 clearly gave us plenty of new product announcements to chew on, and I am glad I got the opportunity to be there on there on the ground floor. From machine learning to hyper-converged, to VDI, The Dell Technologies family continues to make progress, and the industry is better for it. Dell Technologies has the #1 market share in servers, storage, all-flash arrays, HCI, open networking, data protection, thin clients and workstations, and I believe Dell wants to be #1 in every datacenter infrastructure segment out there. I have to give Michael Dell credit- he has led Dell Technologies to be a much more interconnected and valuable company while maintaining best of breed components. This is very hard to do. There is still a tremendous amount of work to be done in enabling, optimizing and getting revenue from the software-defined datacenter and the future of work, but I am liking what I am seeing. I look forward to seeing all this new technology out in the wild.