Today Dell announced a new lineup of business focused Latitude-branded notebooks, all in ones and tablets. One of the 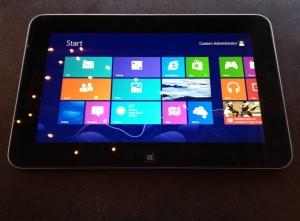 most unique products they launched was a business-focused Latitude 10 tablet. Unlike other manufacturers who announced consumer tablets or business tablets that seem more like consumer tablets, the Latitude 10 isall business. What makes a tablet business-worthy? In discussions last week, both Dell’s Neil Hand, VP PC Computing Products Group and Ken Musgrave, Director User Experience and Design were very clear on what it takes.

Beyond everything else, enterprise IT must feel that a device is secure. The device must also be manageable inside the enterprise like the thousands of other Windows devices. The Latitude 10 supports Dell’s DDPE, or Dell Data Protection and Encryption, which provides enterprise IT policy-based encryption. The storage encryption complies with FIPS or the U.S. Federal Information Processing Standards (140-2) certifications, too. The Dell tablet also supports fingerprint readers and smart card readers for 2 factor authentication.

Enterprise IT devices must also be very serviceable, too. Dell has one of the only Windows 8-based tablets with a 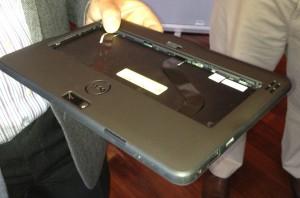 serviceable battery and the capability to have a self-service stand embedded into the design. Imagine if you wanted a self-service kiosk and you wanted to use a tablet. Instead of building a mammoth enclosure around it, build a stand that attaches and screws into the bottom of the tablet? That’s built in as Dell thought about these use and deployment cases.

Compatibility is key, too. Unlike iOS or Android, Windows is a known entity to enterprise IT as they’ve been deploying it for two decades. Every one of their installed PC’s is X86-based, either Intel or AMD. The Latitude 10 uses Intel’s latest and greatest Atom SOC, which gives backward compatibility the apps they already have deployed. Sure, Metro-based apps will be required when used in tablet-mode, but unlike the consumer market, they don’t have to be available immediately at launch to dictate a successful launch and test by the enterprise IT group. Plus, in Windows 8 desktop mode, users can use all the apps they have been using previously. Hardware compatibility won’t be a worry either, as the latitude 10 will connect wil every USB-based Windows peripheral currently supported. These are devices like personal printers, car readers and even receipt printers in retail.

Let’s talk about end users now, shifting away from enterprise IT. What is key in a tablet for end users? First is size. The Latitude 10 has a 10″ display and is 10.5mm thick, close to the thickness of the first iPad. Next is battery life and the Latitude 10 can get up to 18 hours with the extended battery. For a Windows and Intel-based tablet, this is exceptional. Battery life is important in a productivity use case but even more important in retail or warehousing environments. The tablet must make it through an entire work shift with room to spare or you have idle workers or unhappy customers. Next, is the feel of the unit. I have always liked Dell’s “soft touch” rubbery surfaces they started using with the XPS notebook line and extended it to the Latitude 10 tablet. Like my XPS 13, I am expecting no scratches, quite different from my numerous iPads that are scratched beyond belief. Imagine if you showed up for work and got a scratched up tablet as a hand me down. You wouldn’t be happy.

Finally, the stand. Dell pulled out all the stops. In talking to Dell’s Ken Musgrave, he was very adamant on exactly what 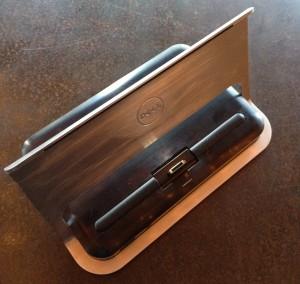 he wanted in a stand and how he stuck to his guns on design and experience over anything else. While I haven’t used the stand in my work environment, I was able to see it for a while to get a feel for it… and it felt really good and super high quality. The stand backing feels like machined aluminum and the heavy-feeling stand feels like forged aluminum. The tablet stand is vital in a working environment in that after meetings, you want to pop it in there with your 32″ display, mouse and keyboard and get work done. You want the tablet to be your second display, too, meaning it needs to be at a proper angle at height, which is adjustable. The stand has a ton of ports, too, including hardwired LAN, HDMI and three USB ports. If you’ve ever used a docked tablet in a work environment you can appreciate how important stand expandability and quality is. the Latitude 10 also has a keyboard accessory with the same quality as the stand, but also includes that same “soft touch” finish as the XPS line of notebooks.

The big unknown here is pricing, which will be released coincident with the Windows 8 launch October 25th. This isn’t Dell being coy, it’s basically a dictate from Microsoft on the flow of timing and information. One thing is for certain, enterprise IT will be giving the Latitude 10 a very close look for their enterprise rollouts and are all giving a big sigh of relief that they have an alternative to the iPad.