Five years ago walking the halls at CES I’ll admit, Dell the PC company looked like they just weren’t that interested in the client PC category. No one should ever form their opinions based just how one trade show was presented, but it was hard to shake that. Boy have things changed at Dell’s Client Computing Group and CES since then. So how did Dell do this year?  Just like last year, Dell brought it. They showed off an attractive lineup of new products including notebooks, displays and Thunderbolt 3.0 docks and won a ton of awards, even more than the prior year. Something has changed at Dell and I really like it. 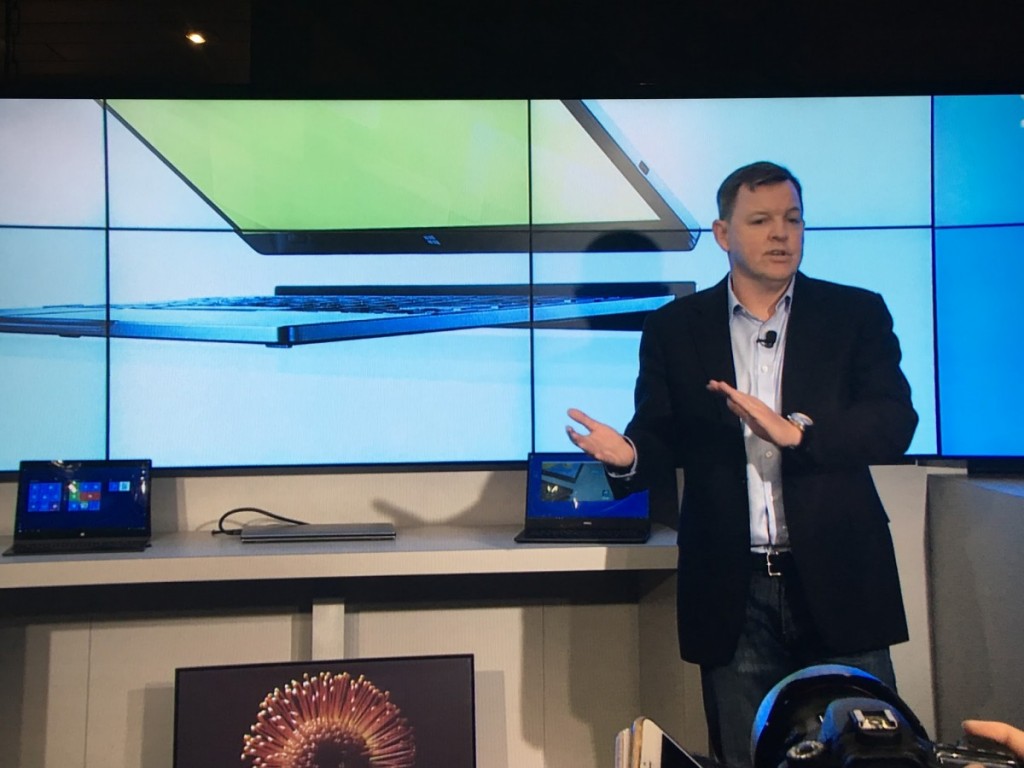 CES 2016 for Dell was all about improving design and upgrading existing product lines while introducing entirely new product lines that follow Dell’s principals of always pushing the technological envelope. This is the company who popularized edge to edge displays and has had a good run with the XPS brand. While there was a lot of CES talk about drones and self-driving cars at CES, Dell remained primarily focused on their business products and addressing the needs of their customers. Dell is a very focused company right now but have given themselves the space to innovate within the more popular categories. These new products managed to win Dell 9 CES Innovation Awards, which I believe validate Dell’s commitment to innovation and design as well as knowing how to play the awards game.

The biggest improvements came with the Latitude line, and I believe, for the first time, Dell’s commercial laptops look nearly as good as their XPS line. Industrial design is personal, but I believe there was a larger gap between the lines. This improved ID is very important as it relates to millennials, which I wrote on here and wrote a paper on here. In the laptop segment, Dell’s Latitude business line of laptops is got a lot of attention in terms of upgrades. The current models, ranging from Dell Latitude 11 5000 series 2-in-1 to the Dell Latitude 14 7000 series are all getting upgraded processors with the 6th Generation of Intel processors, with most of them being Intel Core processors except for the Latitude 12 and 13, which actually run off Intel Core M. The new Dell Latitude 12 2-in-1 also saw a major upgrade with the display adding 4K resolution as an option, making it the only 4K 2-in-1 on the market other than Dell’s own XPS 12. The Dell Latitude 12 7000 series bears a striking resemblance to Dell’s recently launched XPS 12 which also comes with a 4K display. Upgrades are also seen in the Dell Latitude 11, 12, 14 and 15 5000 series notebooks with the primary upgrades being an Intel Skylake overhaul. Upgrading to Skylake generally brings faster, more secure, and lower power processors as well as support for DDR4 which is faster, lower power and allows for much higher capacities. The Latitude 12 and 13 7000 series notebooks from Dell also come with Thunderbolt 3 capability, which means they also gain a USB Type-C connector and added modularity.

Building on Dell’s success with the current XPS line and the upgrade of the Dell XPS 13 and 15, Latitude 12 and 13 as well as the introduction of the XPS 12, the company has introduced some new accessories that are designed to allow these Skylake powerhouse notebooks to be more modular. Because modularity is becoming a bigger factor in the evolution of the workplace, having versatile and powerful docking systems is becoming even more critical. As part of Dell’s upgrades to some of their Intel Skylake notebooks, they included the first Thunderbolt 3 connector on any commercially available device, anywhere. This leadership comes as both a blessing and a curse for Dell’s customers because it means they have the latest technology, but it also means that they will very likely have to wait for Thunderbolt 3 accessories to catch up with the new port. What makes Thunderbolt 3 so important is that it doubles the bandwidth (to 40 Gbps) over Thunderbolt 2 and it adopts the use of the USB Type-C connector, which is an entirely different connect compared to Thunderbolt 2. Also, because of the adoption of USB Type-C, Dell is able to deliver power to the notebook to keep it charged while in use. While there is no doubt that USB Type-C and Thunderbolt 3 are going to take time to gain more adoption, Dell is doing their part by introducing their own Thunderbolt 3 dock for the new business notebooks with Thunderbolt 3 connectors.

Docks are sexy, no really

Modularity is getting more and more important every day in PCs. Buyers are no longer happy with a single device and they want to have their cake and eat it, too, as long as that modularity doesn’t create a device that’s good for nothing. The Dell Thunderbolt Dock, TB15, connects to the notebook via USB Type-C Thunderbolt 3 and supports anywhere between 1 and 3 displays, depending on the resolution of the display. The maximum supported resolution for any one display is 5120 x 2880, which is the same resolution as Dell’s only 5K monitor. It can even support two 4K displays simultaneously at a refresh rate of up to 60 Hz, which is really quite impressive when you realize that they are both being driven by a single connector from the notebook’s Thunderbolt 3 connector. What’s even more amazing about the Dell Thunderbolt Dock and theoretically any Thunderbolt 3 dock is that because it uses USB Type-C, they can also deliver power direct to the notebook through the dock and use it for charging, up to 130W which covers the needs of most Dell notebooks (the Dell XPS 15 ships with a 130W charger). The TB15 dock also supports multiple display outputs including VGA, mDP, DisplayPort and HDMI. In addition to all of the video out capabilities and charging, the TB15 also has five USB ports with three being USB 3.0 and two being USB 2.0. The TB15 also has a gigabit Ethernet RJ-45 jack for wired internet, like most docks do. The dock is connected to client PCs using a ½ meter (18 inch) USB Type-C Thunderbolt 3 cable in order to enable all of this functionality over one cable.

Dell sells more displays than any other PC company out there and not because they are affordable. In fact, Dell sells some of the most expensive displays that are on the cutting edge. Dell’s newest displays wireless monitors, infinity edge monitors and massive 4K OLED monitors. Dell has always been one of the world leaders in monitors and using cutting edge display technology. At CES 2016 this continues to be the case, as Dell is showing off the latest in display technology with their 30” 4K Ultra HD OLED monitor, the UP3017Q. The UP3017Q is designed to satisfy the needs of those customers that absolutely have to have the latest in display technology who are usually creative professionals that extensively use Adobe’s creative programs. What makes this monitor better than virtually every other monitor on the market is that it’s a 4K OLED with impeccable color accuracy, covering 100% of the AdobeRGB color gamut and featuring a 1.07 billion color depth. Dell is also claiming a contrast ratio of 400,000 to 1 and a ridiculously fast response time of 0.1 ms. As if all of that wasn’t awesome enough, the monitor is already designed with future standards in mind with support for USB Type-C which means that video signal, data and power can all be sent over a single cable and the monitor, in most cases, would only need one cable for everything.

In addition to Dell’s 4K 30” OLED display, the company is also introducing two InfinityEdge monitors which build off the design ideas of the InfinityEdge displays in their laptops to create monitors with virtually no bezels. With the U2717DA and U2417HA Dell is introducing 27” and 24” InfinityEdge displays with 99% sRGB color gamut coverage as well as 1440P and 1080P resolutions, respectively. In addition to being extremely thinly bezeled, both of these new monitors also come with an arm to allow for minimal footprint, maximizing desk space and increasing flexibility. Dell is also continuing to address the growing needs of the changing workplace with more mobile workers with the addition of their new wireless monitors. These monitors are basically compatible with virtually any wireless device that supports Wi-Fi and Miracast, be it a laptop, tablet or smartphone but not any Apple devices, which is a shame. Currently, Dell only has two wireless monitors, the 23” S2317HWi and 24” U2417HWi, with the 24” model being an Ultrasharp monitor designed for users that demand extremely high quality panels. The 23” monitor, however, comes equipped with wireless charging capabilities for smartphones, so the base of the monitor also doubles as a wireless charging pad that supports both Qi and PMA standards.

At their suite inside the Yardbird restaurant at the Ventian Hotel, Dell also showed off some of their latest innovations including an OLED Alienware M13X gaming laptop. They also showed off their focus on VR gaming with multiple Alienware gaming desktop PCs which were hooked up to HTC Vive Pre headsets which allowed people to sit on a moving couch and enjoy an immersive VR experience. At CES, Dell was very aggressive with their VR partnerships as they also talked about their involvement with Oculus in their Oculus Ready program and announced a $200 coupon for users that pre-order a Rift towards an Alienware X51 gaming system.

Judging by these new product announcements, it seems quite clear that Dell has spent quite a bit of time and effort to deliver attractive and innovative products in 2016. At CES 2016 people can actually see exactly where Dell is putting their priorities and how they see the workplace evolving into a more mobile, hyperconnected place where fewer wires that enable more functionality are king and no wires are even better. Technologies like Skylake, Thunderbolt 3, OLED and wireless charging are enabling more unique user experiences and Dell is solidly delivering on them.