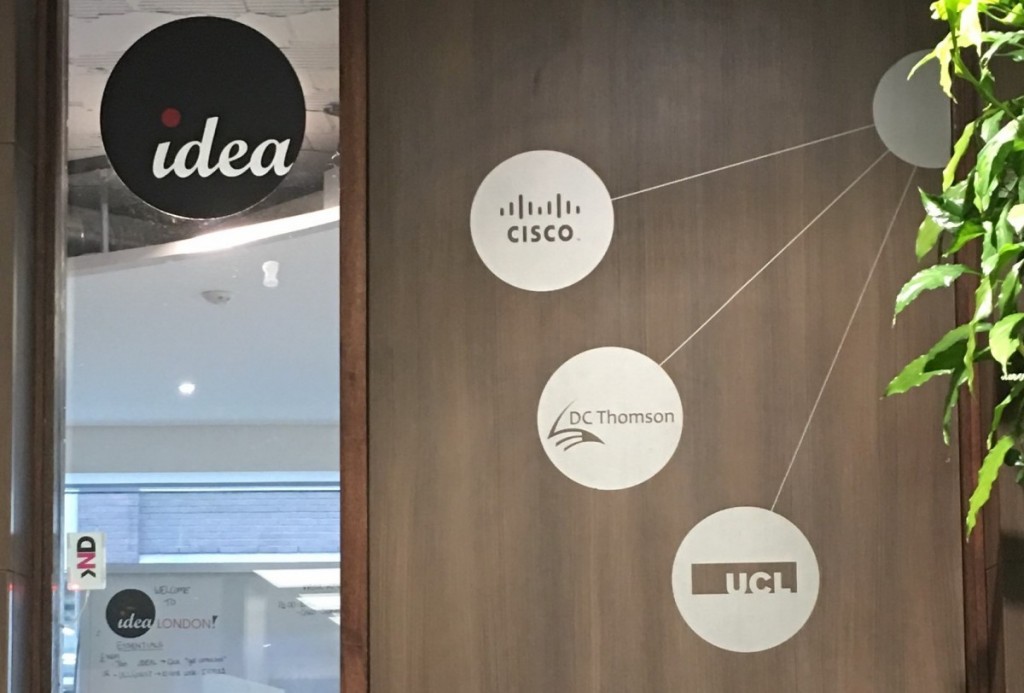 As I’ve personally experienced and written about many times, large corporations have a greater challenge innovating versus smaller ones. This reality can be seen across all industries, but is most pronounced in the tech industry where the rapid pace of innovation drives future growth and profits. As a part of Cisco Systems’s five pillar innovation strategy for innovation, the company has employed a “co-develop” strategy pillar that involves the creation of incubators and innovation centers that allow Cisco to work closely with startups,  co-develop ideas, and drive revenue. One of the most mature of these co-development centers is the IDEA center located in London.

I had the opportunity to visit the IDEA London facility and meet with its director and startups there. I met with Nicholas Crissos, Head of Technology, Cisco Systems Innovation for UK and Ireland. I have to say, I walked away very impressed. Cisco has found a way to drive IoT innovation and revenue inside that same innovation construct at the same time, and that’s not easy to do.

IDEA London is a “post-accelerator”

The IDEA London facility is home to 15 different startups that are “post-accelerator” in that these companies are startups that have passed their incubation and accelerator phase. IDEA stands for Innovation and Digital Enterprise Alliance. It is a brick and mortar facility created as a partnership between Cisco Systems, DC Thomson and University College London (UCL), which combines a global IT company in Cisco with a British media company in DC Thomson and UCL which is a highly regarded global university.

What makes IDEA London so unique is that they are a place where more mature startups can prepare to commercialize their ideas and grow their startup into a sizable business. Cisco can help supply the capital, which includes physical capital like the facility itself as well as monetary capital to help fund the businesses’ next step and human capital with mentoring and experienced advice. 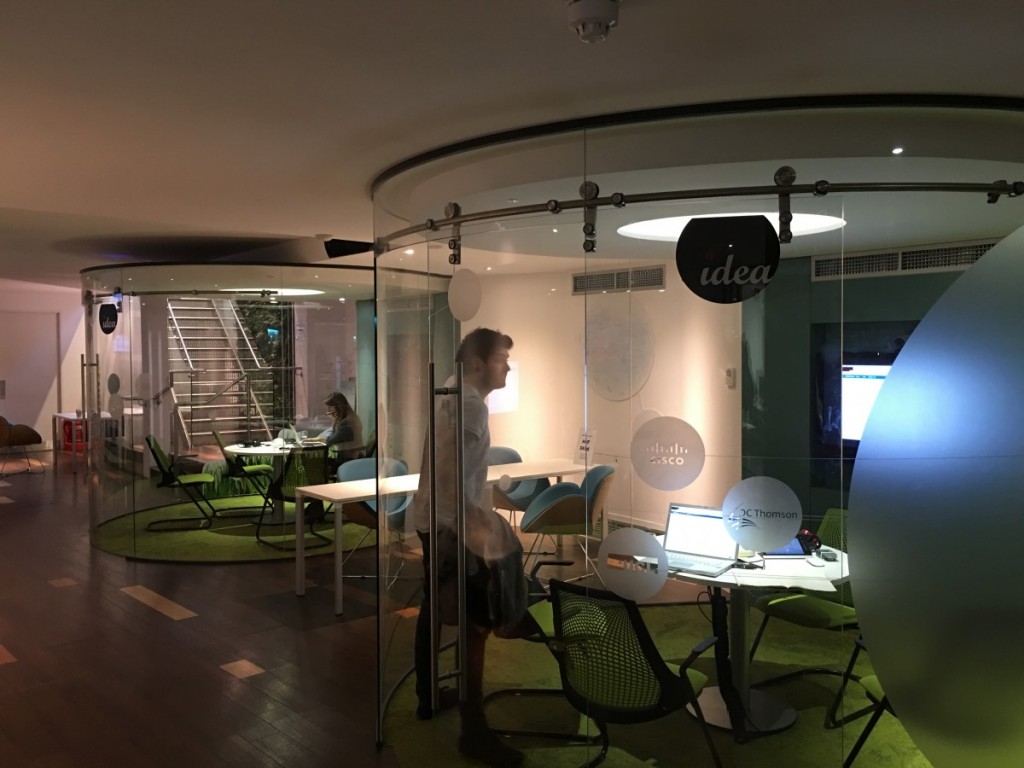 At the IDEA Center in London, they provide three primary functions to the startups that enter their program and facility. The first function is to fuel innovation and ideas, and they do this partly through the Cisco BIG (British Innovation Gateway) Awards which help to evaluate ideas and give companies an opportunity to be brought into the next phase of their company. Following that, companies can join the next phase of their growth through the IDEA London Center as well as all of the services that come along with that. This means that Cisco Systems, DC Thomson and UCL offer their own resources, mentorship and links with their biggest customers, with Cisco being the one with the most influence.

Driving revenue to Cisco and startups

There are currently 15 companies in the IDEA London program. These companies ultimately have to create something from their ideas and the feedback and support provided, and this is where the last function of the IDEA London center becomes evident. This is the creation of the products and services based on the ideas through Cisco Create, a division of Cisco Systems dedicated towards collaborative research and emerging technologies. This includes helping the participating companies create proofs of concept and helping them win bidding competitions.

One project that worked with Cisco Create was in Manchester, U.K., which won £10M to become the world leader in smart city technology. This project, called CityVerve, was one among 34 cities in competition across 4 months that yielded the creation of a new IoT protocol and consortium called HyperCAT. The consortium is made up of a series of 16 startups as well as a plethora of multi-national corporations, local governments and half a dozen universities. Essentially, Cisco leveraged IDEA’s startups “secret-sauce” to win a major deal, that on their own, no one would win or could have delivered.

Now that I’ve provided some background on IDEA London, I want to talk about a few of the more exciting projects they’re engaged in. 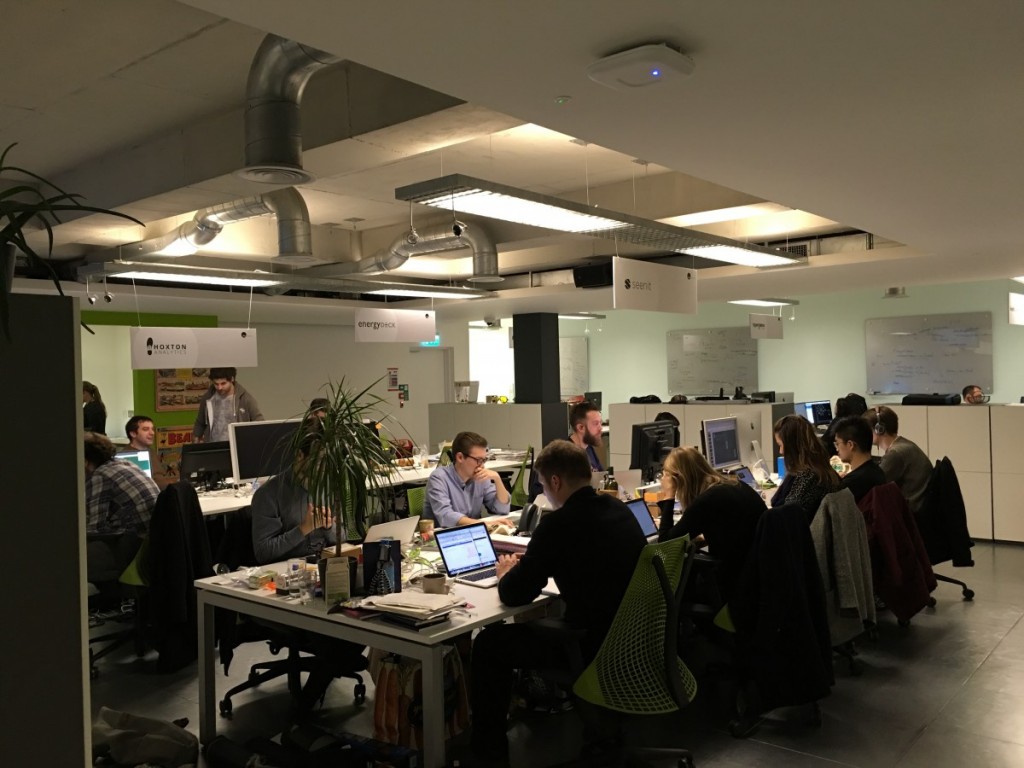 LaaS (Lighting as a Service)

IDEA London’s efforts are not purely visible through the HyperCAT consortium and the members of that group, but also through a few cool projects that were born out of the IDEA London program. One interesting project is the Lighting as a Service (LaaS) which brings together Cisco Systems with their IDEA London startup amBX as well as pureLiFi and the University of Strathclyde. This project was designed to help reduce power costs in buildings through energy and power management as well as improve the overall user experience through advanced controls and automation.

The LaaS project is designed to allow for architectural and design flexibility which should make adopting the technology much easier for architects and builders. It combines Ethernet PoE (Power over Ethernet) and LoE (Light over Ethernet) into a single protocol in order to remove the need to have separate power and data networks for lighting systems. This reduces the amount of cabling needed for smart lighting applications and automatically makes any of the Ethernet connected lighting more intelligent. Given pureLiFi’s  participation, I can only speculate that this could also mean networking over the lighting’s spectrum. 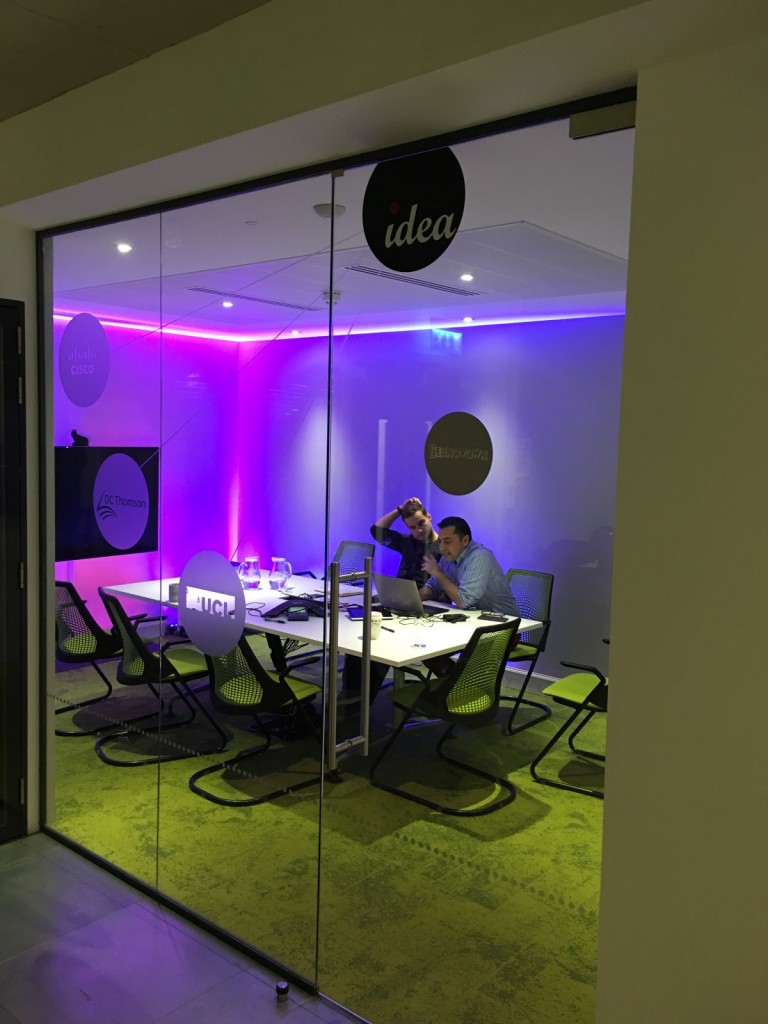 Another interesting project from Cisco Create is CONSERVE which stands for Contingency Operations for Strategic Infrastructure and the Vulnerable. CONSERVE is a partnership between Cisco, Selex ES, City Observatory Strathclyde and Bronze Software Labs. It’s a system that is designed to help people and authorities better respond to natural disasters like flooding and other emergencies. CREATE enables a multi-agency platform that pools together data from the public and private sectors to obtain a better perspective of risks and failures across critical infrastructure during disasters. It is currently being developed for the City of Glasgow whose data is being gathered by the University of Strathclyde.

Railway stations as a service

StaaS, or Stations as a Service, is yet another interesting project that Cisco Create has been helping to facilitate for the past two years. This project is designed to smooth out the public transit experience by combining all of the different data sources at a station under a single controlled experience. To me, this is very similar challenge that buildings have in that there are separate systems and data that don’t work together.

This railway station data sharing is primarily among four distinct groups-  the train operators, retailers, passengers and station security staff, which can allow for a much smoother station experience. It is designed to allow the train system to talk to customers more effectively while also allowing the merchants and ticket officials be aware of any major events or delays, reducing confusion and further delays. This system is mostly focused on rail services and is designed to be scalable and repeatable across all different size rail systems around the UK. In fact, it won a Rail Exec award for ‘Most Interesting Approach to Train Operations’.

Railway car of the future

Being the UK, there’s little surprise that yet another one of the projects is about adding services to the rail user experience. SWIFT, which stands for Superfast Wi-Fi In-carriage for Future Travel, is a project, that is designed to bring a better and faster Wi-Fi experience to travelers inside of the rail car. The project is a combination between Cisco and IDEA London company Wittos as well as Level3 Communications, CGI and Intersection Analytics.

The point of delivering more bandwidth to railcars is to enable new kinds of services and experiences to users in the railcar that they might have not had before due to extremely poor subterranean signal or poor data coverage in the countryside. It will also allow rail companies and their customers to gather more data than ever before about their users and their sentiments to offer better products and services. By enabling these services, SWIFT has the potential of spurring an explosion of new services and technologies based on the super-fast Wi-Fi backbone.

The final project I wanted to highlight is the aSSURE project, which stands for Secure Sensor Use in Real-world Environments and is an IoT security project. It is a project partnership between Cisco, Asset Mapping and Johnson Controls, one of the biggest industrial systems companies in the world. aSSURE’s approach involves establishing a lifecycle management process for IoT data security because they recognize that no single security approach will properly address all use cases and IoT end devices.

The aSSURE project wants to establish a framework to develop different approaches based on the classes of devices being connected. The project will deliver a proof-of-concept architecture that can be tested in a lab to deliver the necessary performance, security and longevity necessary to address IoT needs. This project is designed to strengthen the data security for IoT in a way that will help companies become less fearful of IoT data security and begin to adopt more IoT technologies. 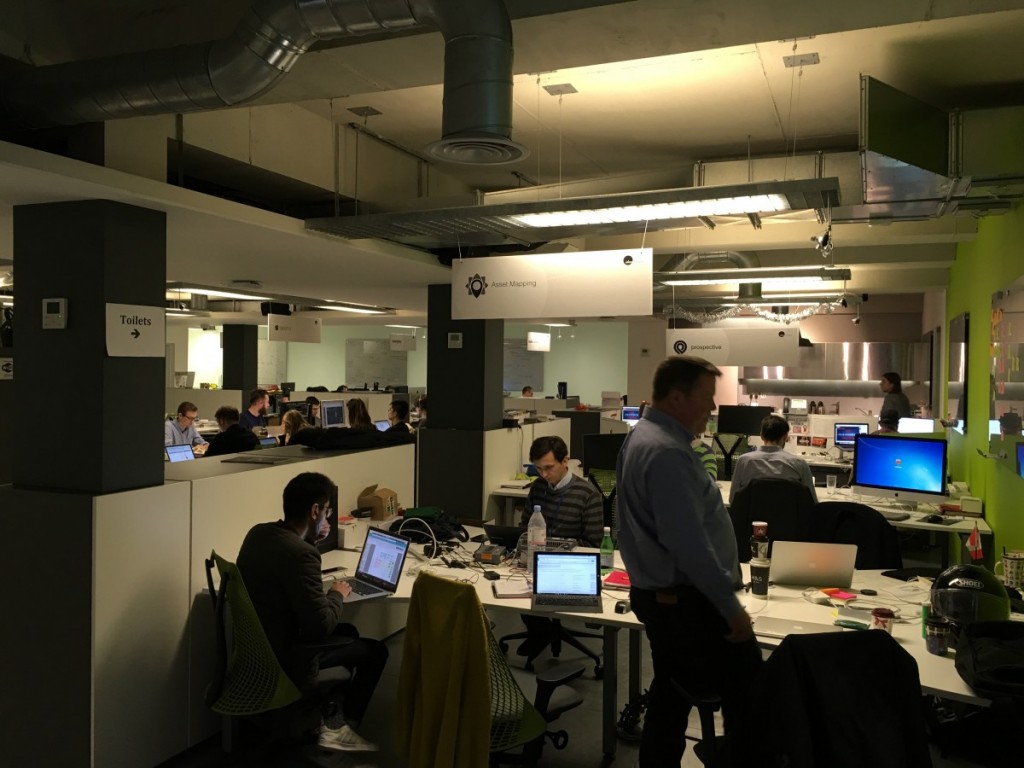 It’s hard to innovate as a large company and it’s even harder to simultaneously drive revenue on that same innovation. Cisco has found ways to do both with its IDEA Centers, which I find unique and exceptional. Since the inception of their IDEA London program and center, it has funneled 30 startups through and raised over £10m for startups, generated £2 in revenue for them and created over 90 jobs for the startups involved in the process. While the sheer revenue numbers may not blow you off your feet, don’t forget that this is startup revenue (versus Cisco) in one IDEA center, in one city, as part of one program in ten which drives the overall innovation strategy at Cisco Systems. You do the math and run the numbers. Now that’s innovative.