Cisco Systems is one of the top companies out there that lives and breathes the concept of corporate social responsibility (CSR). I’ve written fairly extensively about the company’s efforts to give back to communities worldwide—from its TacOps disaster response team to its global Networking Academy, to its extensive partnerships with non-profits, NGOs, and community-based organizations across the globe. Since CEO Chuck Robbins took the helm several years ago he has only doubled down on CSR, making it a cornerstone of his tenure. I believe one of the reasons Cisco Systems is so good at CSR is that it runs its program like a business itself, instead of an afterthought. Cisco even has a target to positively impact 1B people worldwide by 2025, and so far are at 232M. Now Cisco is tackling another important social issue: Silicon Valley homelessness.

The newly announced initiative is a $50M commitment over the next five years to Destination: Home, a public-private partnership whose mission is to end homelessness in Santa Clara County. It goes without saying that Silicon Valley is home to some of the nation’s most prosperous communities, but Santa Clara County also boasts the third highest rate of chronic homelessness within the United States (with roughly 7,400 people in the county without a home, and 2,000 “chronically homeless”). This is a sobering, striking dichotomy, and one that Cisco is hoping to help alleviate with this unprecedented financial commitment. Homelessness is, of course, a complex issue that will require new policy and both political and public will to fully address at its roots. That being said, funding goes a long way—land must be acquired and affordable housing must be built.

Destination: Home says it will leverage this partnership to build more low-income housing, improve the technological capacity of the homeless services sector, and invest in a number of other promising practices to improve stability and support for individuals and families in need. Cisco’s commitment will only bolster efforts by the community at large to end homelessness in the area—voters in Santa Clara County approved a $950M housing bond back in 2016, $700M of which is allotted for Extremely Low Income and Supportive Housing.

Cisco isn’t an organization that throws money around willy-nilly. I’ve written before about the company’s approach to partnerships; the organizations that receive its financial backing are the ones who have long-term, measurable strategies in place for success. Cisco Systems clearly has faith in the long-term vision of Destination: Home if it’s willing to invest. Destination: Home has shown great results over the past 3 years, finding permanent housing for 5,154 people (including nearly 1,000 veterans)—clearly something is working here. The organization follows a “Housing First” strategy, which contends that while putting a roof over a person’s head is the first step towards turning a life around, it has to be followed up and supported by proper social services.

What struck me was just how much less it costs in totality to provide housing versus someone sleeping on the streets. Living on the streets costs the area more in the long run as shelters, medical care, ER visits drive costs way up.

This holistic, long-term strategy surely appeals to Cisco—the company itself has never been one to just throw money at a problem and walk away. Destination: Home, like Cisco, is clearly focused on long-term results. 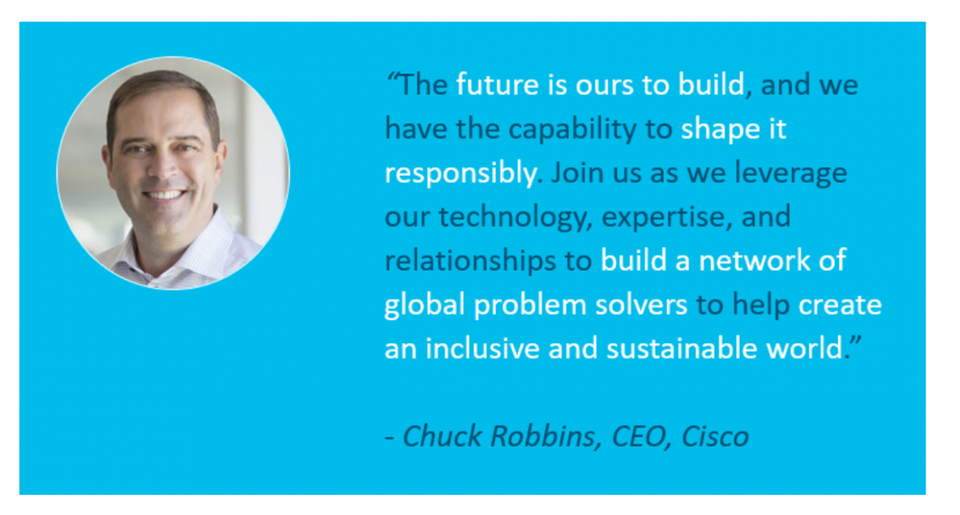 I think it’s important to say that this is not just about CSR and getting a good photo op. To me, it seems to speak broadly to Cisco’s purpose-driven culture as a whole. I think it’s clear Chuck Robbins has a personal passion about the homelessness issue from the blog he published on the Cisco website earlier this week. Cisco sees itself as a global citizen, and clearly believes that its capabilities can be a force for positive change and problem-solving in the world. To borrow from the Spiderman franchise, “with great power comes great responsibility.” Cisco has proven time and time again that it takes its role as a global agent for change very seriously, and this investment in Destination: Home is the latest example.