I’ve been attending Cisco Live this week in Las Vegas—yesterday I published my recap of Day 1’s  opening keynote. On Day 1 we heard more from CEO Chuck Robbins about Cisco Systems’ intent-based network, and Robbins’ overall vision for the company—it was a great kickoff to the event. Today,I’ll be recapping the Technology Vision Keynote from Day 2, which went a little deeper on some of the topics talked about during Day 1. 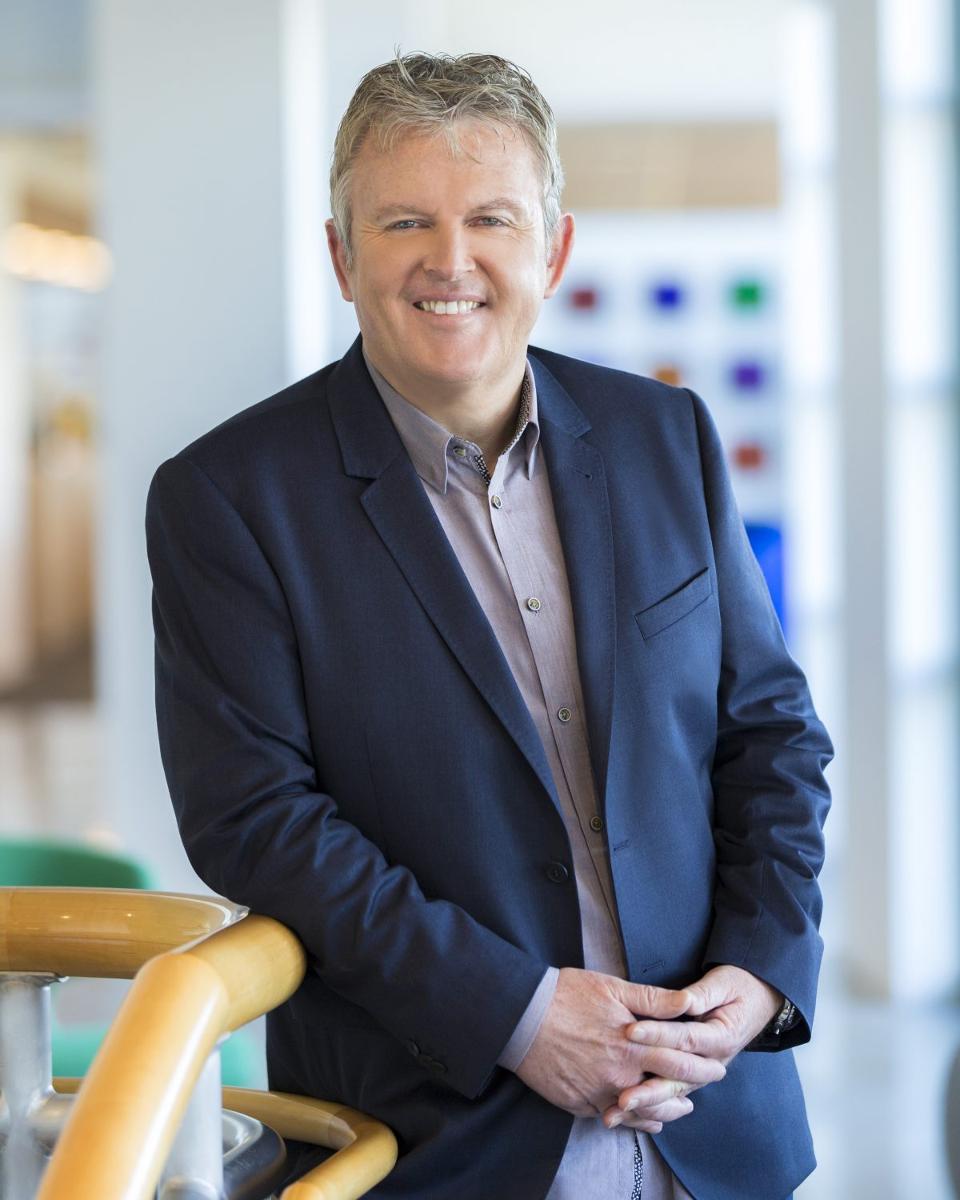 Chris Dedicoat, Cisco Systems ’ EVP of Worldwide Sales, kicked Day 2 off by saying a few words about the new era of IT, and referencing an impressive statistic: last year the number of “things” connected to the Internet outnumbered PCs, phones, and laptops for the first time. He showed a few examples of these IoT devices—a pump, a soccer ball, tags for medical equipment in hospitals. We should all imagine what that means to the network and ask if the current network can handle this. I keep thinking about the “million new devices per hour” from Day 1.

Dedicoat then talked a little bit about smart stadiums, and using Cisco technology to improve attendee experience and drive up concession and merchandise sales. He went on to talk about the need for scalable, secure network that reduces complexity, and how the new Network Intuitive addresses those needs. Cisco has a lot of competition on the edge and was glad to hear Dedicoat talking about it so clearly. I think this was a good setup for the Network Intuitive and I was particularly impressed at how he expressed these needs from a real customer point of view. You may expect this from the “sales guy”, but Dedicoat is a lot more than that, I see him more of a “customer advocate”. I got the chance to talk with Dedicoat and Chuck Robbins at the end of day 2 and these two certainly make a powerful 1-2 punch as customer advocates.

Deeper dive on Network Intuitive
Dedicoat then brought David Goeckler, SVP & GM of Cisco’s Networking and Security Business, onto the stage. Goeckler led off with a brief announcement that was somewhat glossed over on Day 1  a Cisco security connector would be coming to iOS, which will bring all of an enterprise’s iOS devices into the security architecture. I need to dive into this in detail to thresh out the reality from the marketing. After that, it was headfirst into the Network Intuitive. Goeckler mentioned the positive press coverage the new network architecture has been getting over the past week, but stressed that the real test was customer satisfaction. I liked that statement.

On that note, he brought up Kevin Tompkins, the network architect at Scentsy, Inc.—a company that specializes in candles and fragrances. Scentsy has been working with SD Access (a part of Cisco’s DNA center) and the Catalyst 9000 switches for months. Tompkins emphasized the benefits of being able to define policy globally with SD Access instead of having to go through the time-consuming process of setting policy manually on a case-by-case basis. In the C-Scape analyst event, we got some good testimonials from Royal Caribbean, Wipro Limited, DB Systel and Cisco’s own infrastructure lead. The net-net was that the customers said they got improved experiences, operational efficiencies, and lower costs using the new Network Intuitive.

Next, Goeckler spent some time further explaining how intent-based networking works—the intent, security, context, and learning loop that connects the new network infrastructure with the DNA command center. He then brought Sachin Gupta, VP of Product Management for Cisco’s Enterprise Switching & Wireless division, to the stage to go into more detail on the DNA center. Gupta explained that while in the old days every single network site had to have a technician to provision the network box-by box, now that can all be done from the DNA center—administrators can design, administer policy, provision network, and look at assurance all from this one centralized command point. Gupta walked the audience through examples of all these DNA Center capabilities. I have seen many of these features from Cisco competitors, but Cisco can now do this at scale with a diverse set of features for a variety of customer use cases and workloads. That is key to consider. 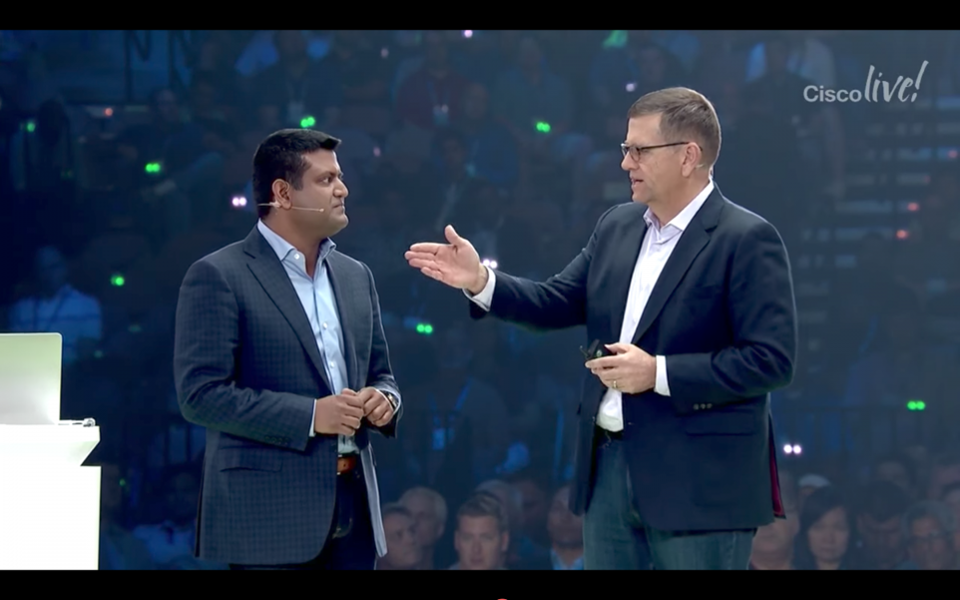 Gupta then moved on to the Catalyst 9000 series. He began by showing the audience “the most advanced campus-switching ASIC in the world,” which is at the heart of the 9K series. In addition to the programmable ASIC, the Catalyst 9000 series has the new open, programmable iOS XE, and model-driven APIs to provision everything on the switch. Gupta emphasized that with the 9K, Cisco really focused on better data and better telemetry. In addition, he added that Cisco paid particular attention to being able to host applications on the box, with an x86 CPU capable of running applications in containers or VM environments. I am zeroing in on this very important piece of adding more compute and app virtualization on the edge. Big question I have is “how” much compute is left to run non-networking apps.

Lastly, Gupta stressed that a lot of attention was put on the design of the 9K, in order to make it user friendly and more intuitive. Cisco doesn’t go out of their way to point out that this current conversation is on the edge, not the core. Strategically, it’s smart that Cisco would drive the “one-network” thinking as they already own the core and are competing at the edge and quite frankly, that’s where the growth is with IoT and mobility. Finally, I appreciate that Gupta pointed out the ASIC as accelerated has become all the rage with NVIDIA, Google, Microsoft and Amazon all jumping in.

Cisco has to be thinking “welcome to the acceleration party”, my words not there’s.

Gupta exited the stage, and Goeckler shifted focus to Cisco’s new Encrypted Traffic Analytics capabilities. He brought TK Keanini, Principal Engineer, on stage to explain further. Keanini led off with a question: “On any given day, how much of your digital business travels in the clear, versus encrypted?” He went on to say that encryption has gone from being the exception, to being the rule—over 55% of all traffic was encrypted in 2017, and that’s expected to rise to over 80% by 2019. Consequently, over 70% of cyberattacks are expected to be encrypted by 2019. The new Encrypted Traffic Analytics capabilities look at the metadata of the flow, and use machine learning to determine what is benign behavior and what isn’t—without even having to decrypt it. This, as I’ve mentioned in previous columns, is especially important because it avoids inevitable privacy concerns that would arise from decryption. When a threat is detected, Stealthwatch reaches out to the DNA center, and quarantines it.  I am super-excited to see what Cisco is doing with advanced threat detection and management as it appears as best-in-class.

The future of Cisco Systems

The last segment of the day was given to Rowan Trollope, SVP & GM of Cisco’s Applications Group. Rowan briefly introduced a few special guests, and then started in on where Cisco is headed in the future. He spoke about the “new data economy,” revolving around the collection of data, analyzing the data for insights, and turning those insights into action. He elaborated, saying that one of the best things about this model is that it is a closed-loop system—continuously improving, the more data that is consumed. Trollope went on to say that what most businesses don’t really care about technology itself—just what they can do with it. Namely, the goal is to achieve “zero distance” to their customers—to leverage data to personalize and improve customer experience. Trollope said that the intent-based networking that this year’s Cisco Live has revolved around is, in his mind, the first step towards a larger goal: data-powered, intent-based infrastructure. This was a good ethereal discussion and thought exercise that tee up future conversations and Cisco experiences.

Trollope left the audience with a quote from Kevin Kelly, the former editor of WIRED: “The Internet is still at the beginning of the beginning.  The last 30 years has created a marvelous starting point… a solid platform to build truly great things.  And the coolest stuff of all hasn’t even been invented yet.”

It was a good hopeful note to end the Day 2 keynote with. Like Day 1, Day 2’s keynote was entertaining and informative, and it was good to get an even deeper dive on the Network Intuitive. Stay tuned for my recap of Day 3’s security keynote.