A corporate brand should speak volumes about a company’s mission and differentiation and should be the first thing that comes to a customer’s mind when they think about a company. It’s not just the imagery (though that is certainly important), but rather the feelings and associations that it elicits. Contrary to popular belief, B to B brands are just as important as B to C brands, although executions and targets are different. Today Cisco Systems is launching a global brand campaign supporting new, corporate positioning.

Cisco Systems is positioning themselves as the “global networking leader and technology visionary of tomorrow.” The company knows they need to strongly link networking leadership with being a technology visionary. Cisco intends to drive that home with a new, omni-channel branding campaign. After getting a close look at the new branding campaign, titled appropriately, “There’s Never Been a Better Time,” I believe it is directionally right and could take them where they want to go. It’s a new, exciting era for the company with new management and new opportunities and I believe that now they’ve finally got the right brand expression and execution to represent that for the buyers they want to attract. 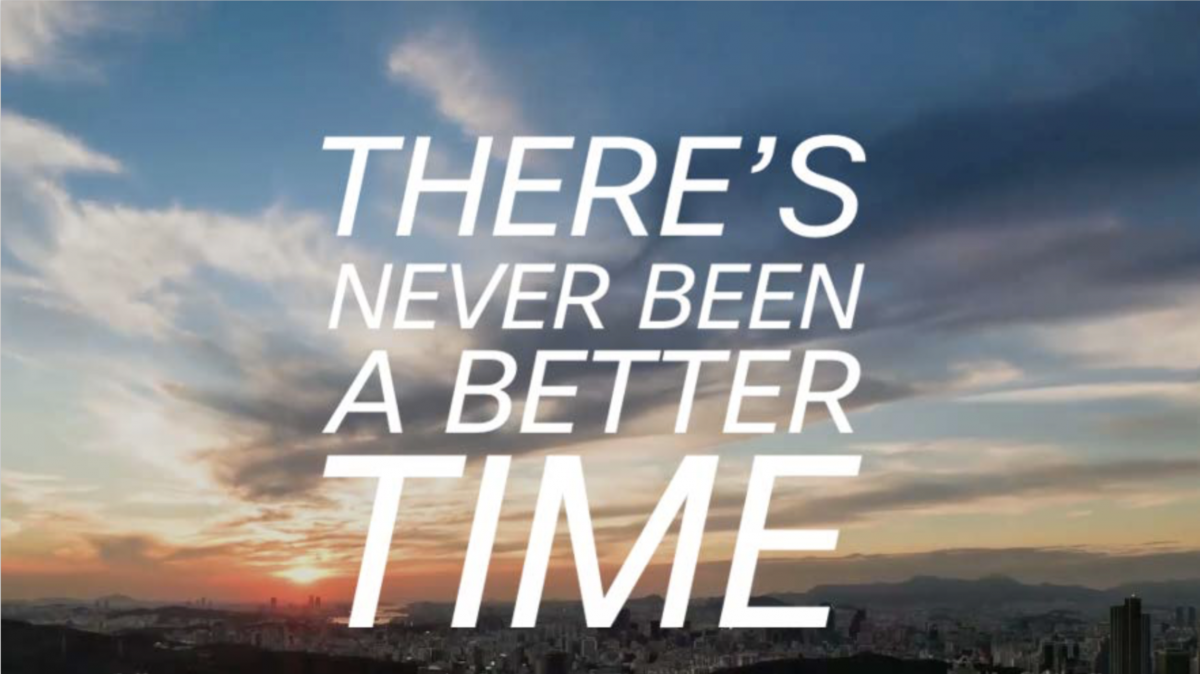 A campaign of “Technology Optimism”

Global digitization is disrupting the way the world conceives business models, products, and services. Cisco Systems believes that although technology can be a driver of disruption, it also holds key solutions—in their words, by connecting everything, they can “make anything possible.” There may be some horrible things going on around the world, but Cisco wants to show how tech can positively impact this world, using an optimistic tone. Millennials will love this and I don’t think it will alienate others.

Cisco’s new branding campaign focuses on a diverse offering of customer stories—real world examples of how Cisco’s technology is transforming and improving people’s lives, industries and, in some cases, entire countries. 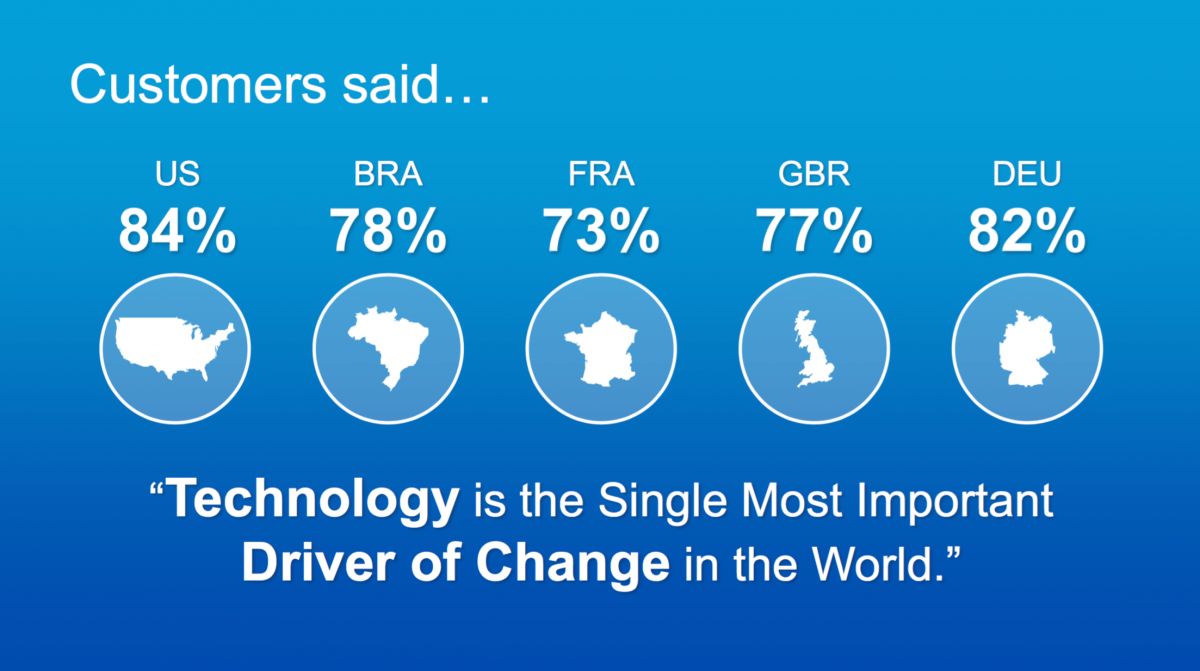 As I have written before, Cisco’s corporate social responsibility (CSR) efforts have been a mission of the company throughout their 30-year existence, and this new brand campaign focuses on bringing these personal success stories to the forefront. These highlighted “conversations” between Cisco and their customers, partners, employees, and influencers all seem to point towards one thing—despite hardships, people seem to be excited for the future, and they truly believe that technology is a force for good in the world. These “Technology Optimists” are both the driving force behind, and the target audience of the campaign.

This is a big departure from “disrupt or be disrupted”, a message (not a brand theme) which made companies feel the sense of urgency to transform. It worked for Cisco for a few years, but it is important for the company to move beyond that.

From a targeting approach, Cisco Systems is taking a 360 audience engagement approach—not just directing the new campaign towards customers, but also their employees and partners. Aside from the customer stories, Cisco is launching a global advertising and media campaign. Customers will be targeted in an omni-channel experience and journey. Partners like resellers will have co-branding opportunities, and a platform to share their own impact stories. They will also have access to campaign training and assets on day one, literally today. Cisco employees will be engaged through a “Follow-the-Sun” internal launch, local employee events and contests, global Cisco campus signage, and through social and digital outlets. In order for any rebranding to be successful, it has to be consistent across the board—it looks like Cisco has this covered.

One particularly striking component of the campaign that I have to comment on is the vibrant imagery and posters the company has designed—the campaign slogan in all caps, against vivid backdrops targeting Cisco’s key causes. An image of a TacOps rescue helicopter hovering over stormy seas reads, “It’s never been a better time… to save a life wherever it may be.” An image of a piece of heavy machinery reads “It’s never been a better time… to automate the world’s most dangerous jobs.” These graphics really pop out—they’re attention-grabbing, and thought provoking, just as Cisco intended them to be. 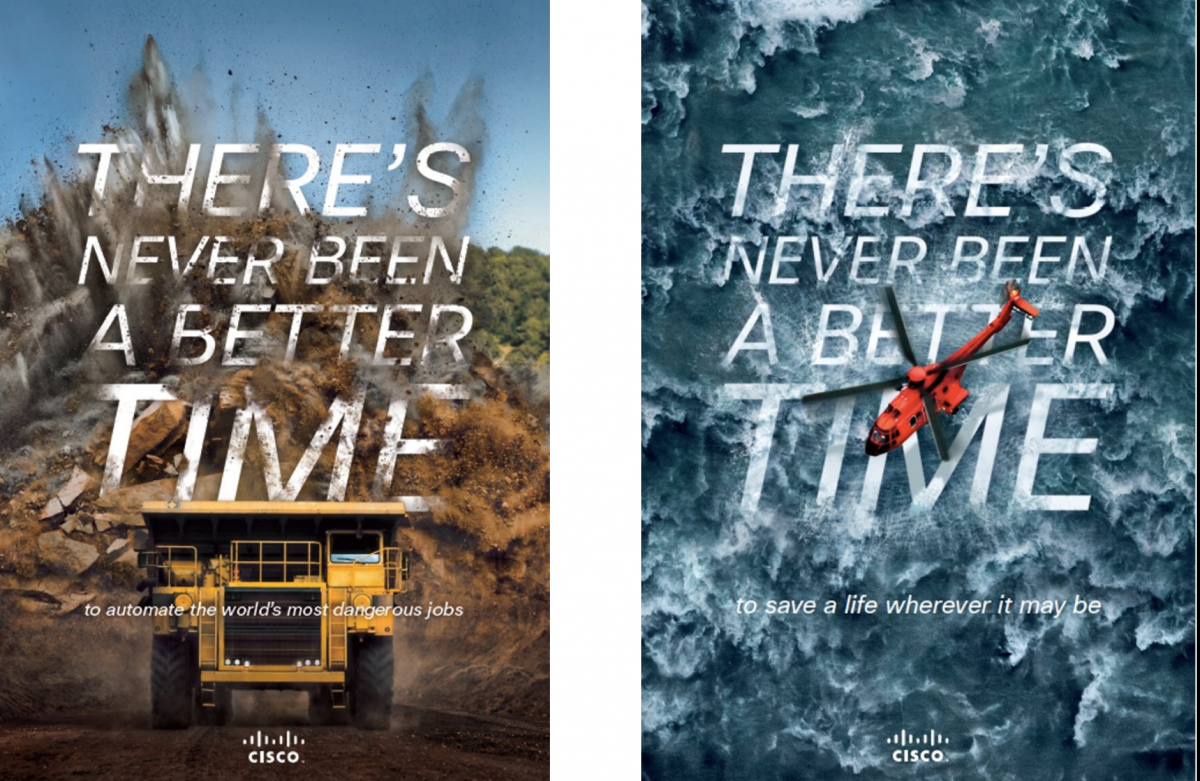 A new, innovative approach to branding campaigns at Cisco

I really have to applaud CMO Karen Walker and VP of Corporate & Brand Marketing Michele Janes for the innovative, unique approach they’re taking here, executing some real Cisco-firsts. There’s a number of things that make this campaign vastly different than Cisco’s prior branding efforts. First off, the campaign is customized by country and actually kicks off outside the U.S. in Australia—telling impact stories that are regionally relevant, and therefore more relatable to their target audiences. It should be much more effective at engaging local populations than a one-size-fits-all, blanket campaign. These take a lot more work and also, creative is more expensive.

Also, it is customer (instead of business) oriented—it’s about the people, not the bottom line. I’ve written recently about Cisco’s CSR program, and how I consider it to be one of the best, most effective programs currently out there. This new rebranding positions these CSR efforts and the real-life human impact as the company’s main mission—not just a feel-good humanitarian side project to their business objectives. I can’t think of another company out there that is doing anything quite like this. It is hard to connect the “feel good’ with “business benefit”, but what I have seen so far from the creative, they managed to pull it off.

In addition, the campaign comes optimized first to reach the world digitally, and through mobile devices and social media (Hashtag “#” neverbetter). This doesn’t mean that TV and CPM-based print ads won’t happen, they’re just secondary. Considering much of Cisco’s efforts are focused on improving connectivity in developing markets (where some are forgoing PCs in favor of cheaper mobile devices like phablets and smartphones), mobile optimization is a particularly nice touch. I think this campaign has the potential to reach a lot of people.

This campaign is probably going to play better with the millennial subset than their previous branding efforts. The digital and social media component is a big part of it—obviously that is the best avenue to reach the demographic. But also, I think the overall optimistic, inspirational tone of the campaign will appeal to millennial sensibilities. The prospect of being a force for good in the world has the potential to draw in a new generation of Cisco employees and volunteers—all eager to make a real human difference and leave their imprint on the world. Research also suggests that millennials want to buy from companies and people who share similar feelings and causes as they do, more than previous generations. Remember, millennials don’t live to work, they work to live and this extends to the importance of their causes.

Right moves at the right time

While rebranding can sometimes be indicative of a struggling company’s identity crisis, this is not the case here. If you ask me, Cisco Systems knows who they are today, who they want to be tomorrow and what they want to stand for. With a change in leadership, it’s always a good time to reassess branding and the external world gives you permission for a brand change.

One of the most important things Cisco will need to do to connect their corporate position with the campaign is to make networking more important to everyone. The market and pundit conversation is about cloud, mobility and IoT, less about building blocks of compute, storage and networking and the company has some work to bring that to the forefront.

As I’ve written before, new Cisco Systems CEO Chuck Robbins has made corporate social responsibility a cornerstone of his tenure so far—it’s not all that surprising that he’s decided to rebrand the company in that direction to make that message even more clear. In the words of CMO Karen Walker, “While this is a time of tremendous change, it is also a time of tremendous opportunity.” With that in mind, it looks as though Cisco is seizing the opportunity. In fact, I would dare say there’s never been a better time to debut this rebranding campaign.