When the news of the collaboration between Apple and Cisco Systems hit the wires on Monday, the announcement took many by surprise. But even as it seemed odd to many that the two tech giants were working together, it is also completely understandable.

Both Cisco Systems and Apple battle for dominance in business communications; they just approach it from different ends of the beast. Cisco is the network incumbent with the lion’s share of the corporate IP networking business, making them the natural choice for most 1customers when the PBX phone systems of the past began their transition to IP-based phones. But wired phones are becoming less critical for communication tools, as users gravitate to the convenience of mobile phones or even PCs and tablets featuring software like Microsoft Lync, Microsoft Skype for Business, or other conferencing and collaboration tools. In the corporate communications world, the challenger is not another phone equipment company, the challenger is the disaggregator—companies like Apple, Google, or even Microsoft—who will change the way companies communicate.

With the rise of mobility and “bring your own device” (BYOD) plans by many large corporations, communications tools are becoming less standardized and harder to rein in under control. Corporate IT, who now owns the phone infrastructure, is in need of better collaboration, more interoperability, and standardization. The move is brilliant on Cisco’s part as the the Venn diagrams of Apple and Cisco rarely cross; both companies can work with each other without having to worry about competing priorities. And once Cisco starts delivering on Apple iOS integration, the Android platforms that rely on Google’s development efforts will probably not be that far behind, as competition is hot in mobility and nobody wants to be left behind.

What this collaboration will bring is still vague, but there are clearly areas where the two companies can work together to make the experience better for the end user. Patrick Moorhead, principal analyst of Moor Insights & Strategy was quoted in The New York Times saying, “All this makes perfect sense to me” because, on the surface, it appears to be a win-win for both companies. Much of the talk on the street was about being able to prioritize iOS traffic on the network to ensure better video and communications. But that is something that companies could already achieve with much of the capability that Cisco already embeds in their products today. On the phone front, where the market is ripe for disruption, there are opportunities to innovate. Principal in these are the ideas of proximity and preference.

As an independent worker, I enjoy the flexibility of being able to work from home, and my cell phone is my primary business line. As an Apple user, I enjoy the ability to have calls roll to multiple devices—unless they are all near each other. Unfortunately, when a call comes in, as you can see in the picture below, it rings on all 3 devices: the phone and the tablet and the PC. 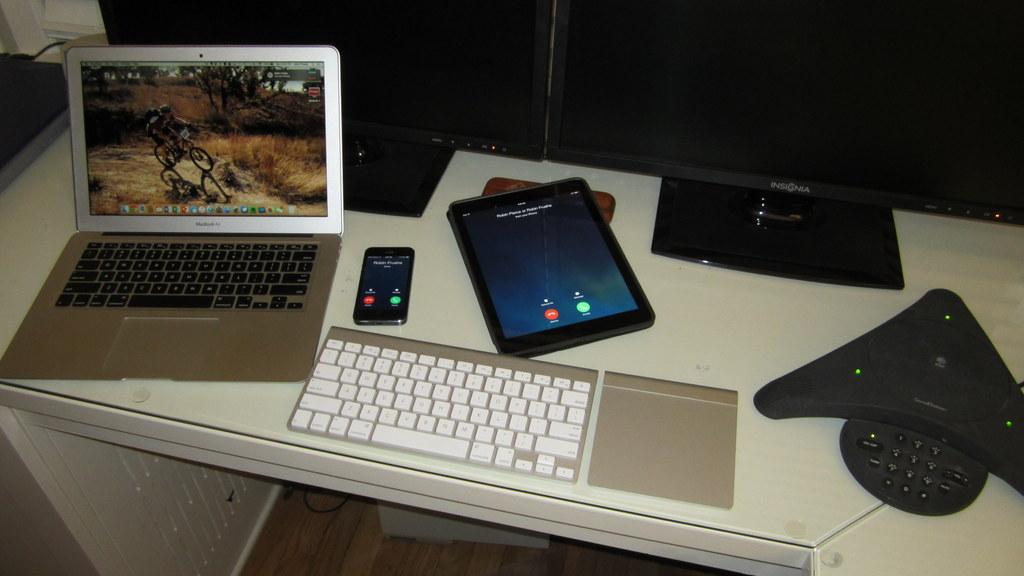 If I was typing on the PC, the other devices should be smart enough to know which is the “active” device and just ring there, instead of firing up all three into a cacophony of out-of-sync ring tones. Or the call could just vibrate the other devices sitting with locked screens.

Now, move this to a corporate environment with rows of cubes. You can see how being able to sense where users are and intelligently routing calls to them could be a big win for productivity. No more phones ringing endlessly in empty cubicles.

Additionally, being able to assign call preferences to devices is very valuable. For instance many would love a rule like “if I am at my desk and Customer X calls me, route the call to my cell phone as I am going to inevitably get up and try to find a quieter area to talk” or “always send Supplier Y to my desk phone, and never roll it to my cell phone because he is based in Taiwan and calls at 3AM my time”.

For Cisco, this agreement brings the opportunity to maintain share and relevance in a market that is being disrupted by software-based phones and other communications options. Customers with an existing investment in Cisco IP phone systems have a reason to stay the course. For Apple, this agreement brings just one more proof point about being “enterprise ready”, a point that is also shared by Patrick Moorhead who believes that this agreement allows Apple to focus on enterprise workflows. Combined with the IBM partnership to bring enterprise applications to the iOS platform, we see Apple as a company slowly making the right moves to push themselves deeper into the commercial world. While Apple’s PCs will probably remain outside of the boundary for most purchasing departments, it’s a safe bet that close to half of the employees walking into their offices each morning are probably carrying an Apple device, either a phone or a tablet.

One nagging issue that many employees will need to come to grips with will be the potential for location-based services to not only remove the need for tools like voicemail but also to potentially provide an employer with too much information. While we would all love nothing more than a phone system inside the building to know where we are and effectively route calls to the most logical device, the only way that a system can do that is if it knows where you are all day. Every second of every day. Exactly where you are.

While employees should not expect the same degree of privacy that they experience in their personal lives once they cross the threshold at work, there has been an implicit “innocent until proven guilty” expectation on tracking. While your phone has the ability today to communicate your exact coordinates, that data goes to your carrier, not your boss, even if the company supplies the phone. When your phone is part of the corporate phone network, companies are going to need a very clear-cut privacy and tracking policy. The smart ones will figure that out before the lawsuits, but others may not be as lucky. Additionally, the collaboration could open employers to call logs and address books on phones—convenient when you want to maintain a single synchronized address book, but if you have non-business friends who work for a competitor, do you want your boss to know that?

As with all collaborations, the devil’s in the details of how services and capabilities are shared or not. In a market like telecommunications it’s smarter for Cisco and Apple to be working together to bring a richer set of functionality to companies, but only as long as the prioritization of one device’s traffic doesn’t hamper another’s capability. I see nothing that says these same capabilities could not be brought to Android or other platforms (like Blackberry or Windows phone) in the future as well, but Apple was smart in being the first out of the chute. Just like their partnership with IBM, they need to tap into the commercial market, and mobile devices are Apple’s best option for tackling that market.