Today Cavium announced the second generation of their ARM Holdings CPU targeted at the server market. The new chip, the ThunderX2, is expected to be available in the second half of 2017 and appears to be one of the best design specs that has been disclosed for the ARM Holdings ecosystem. There is this small matter of executing to the plan that is required. It is the follow-on to their ThunderX CPU that began sampling early 2015 and was released for production later last year.

ThunderX2 is a 14nm FinFET design, and the company claims it will deliver 2 to 3 times the performance of ThunderX on select workloads with a higher performance to power ratio. Their plan for the X2 is to include 54 ARMv8.2 cores with a target frequency of 2.4 to 2.8 GHz and up to 3 GHz in turbo mode (versus their current 28nm, 48 core, 2.5GHz design), 32MB of what Cavium calls shared Last Level Cache (LLC), 6 DDR4 memory interfaces running at 3200MHz (1 DPC) or 2966MHz (2 DPC), multiple 10/25/40/100 Gb/s Ethernet (KR) interfaces, enhanced virtualization support (including IO), ARM Holdings Trustzone security and a variety of hardware accelerators. In fact, Cavium’s best opportunity to make an impact in the enterprise space is through these accelerators and a must have a laser focus at providing undeniable value propositions. 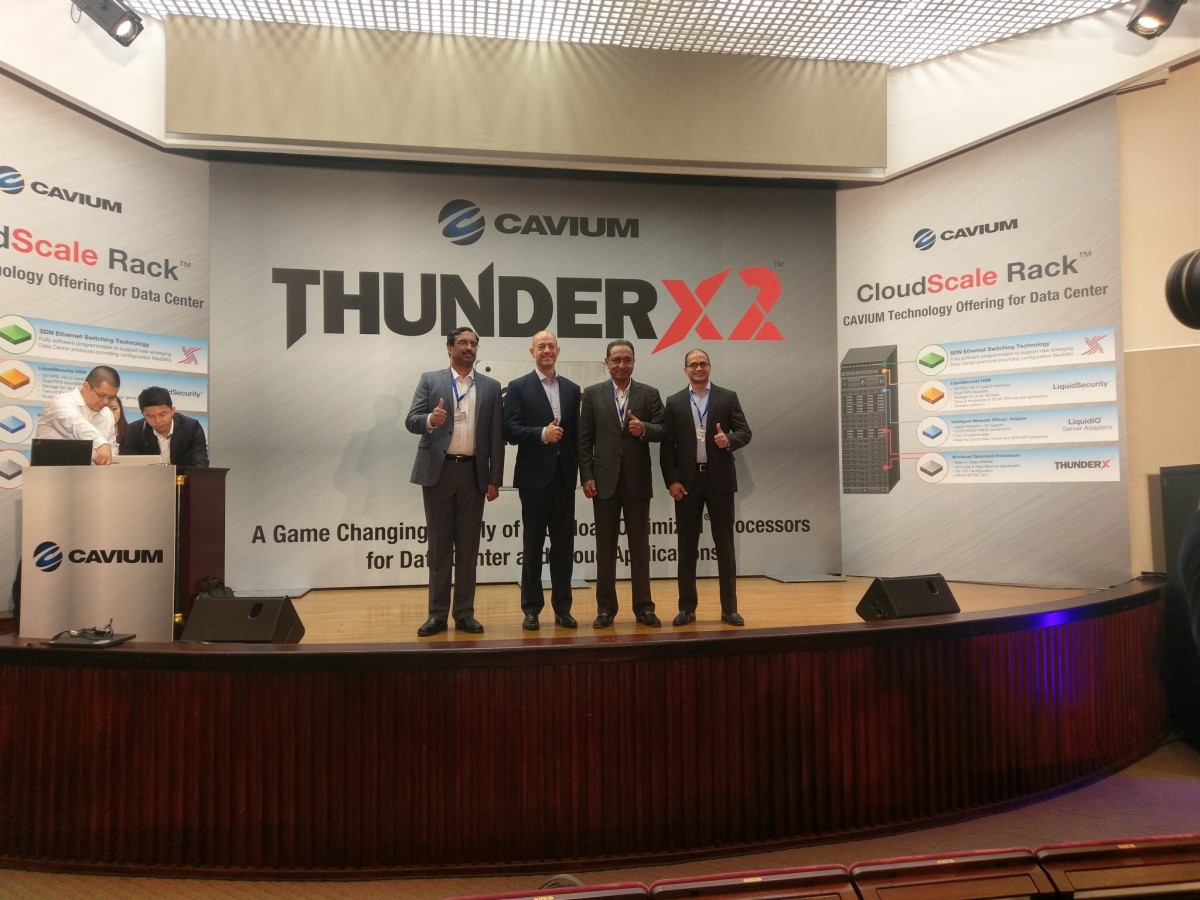 All smiles at the ThunderX2 Computex event (Photo Credit: Anshel Sag in Taipei)

Cavium’s ThunderX2 will be available in the same four flavors as ThunderX, each targeting distinct markets.

ARM Holdings virtually owns the embedded and handheld space, but is ThunderX2 enough for the server space? To date, no one has had a notable impact on this Intel-dominated segment even though ARM Holdings announced plans at TechCon last year to have a 20% market share in 2018. 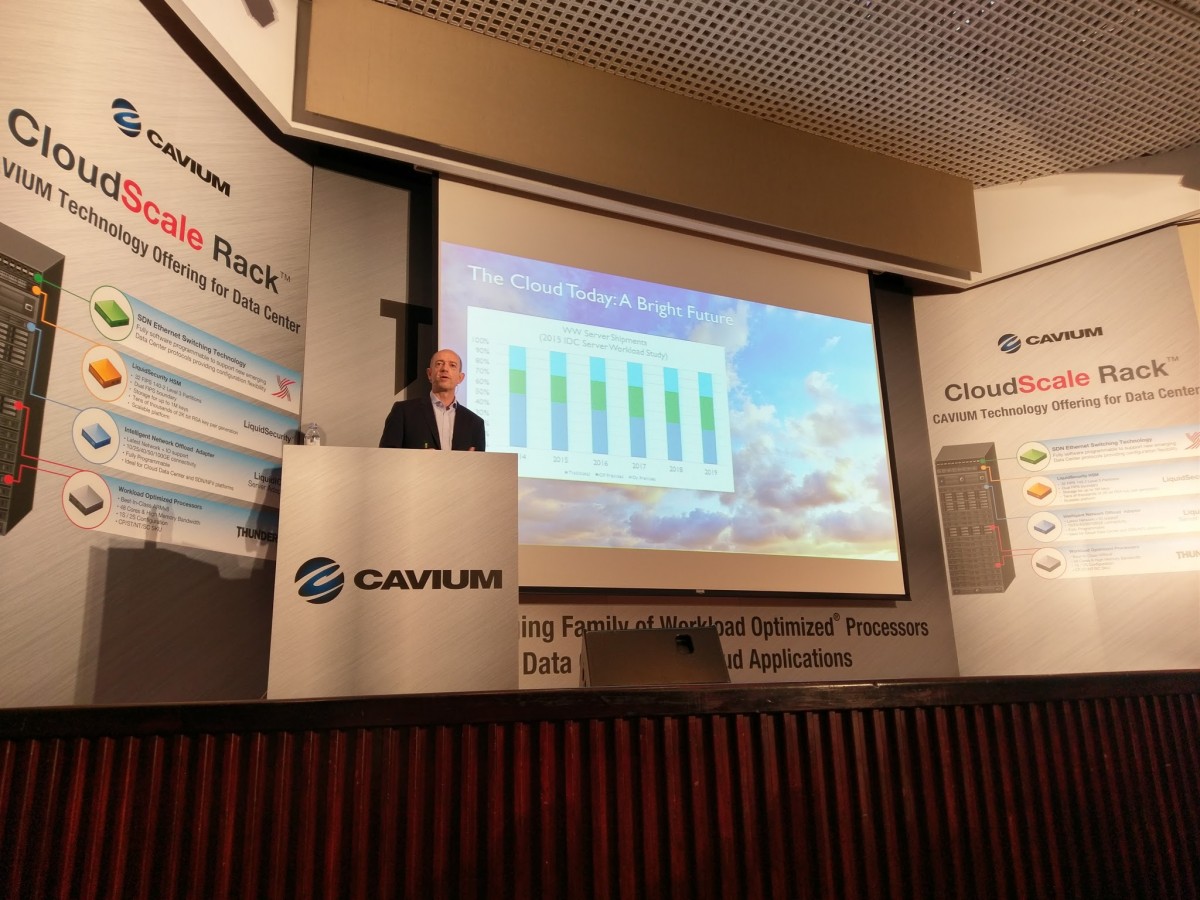 Cavium is convinced they will be performance competitive with Intel with better power utilization and a better total cost of ownership (TCO). Many companies have tried and failed to do this. Most end customers have cited the lack of software or ecosystem immaturity as the leading deterrent or simply the lack of a compelling enough value for them to mandate a switch. That said, the software community has not been standing still in its support of ARM Holdings. Most major Linux distributions (Canonical, FreeBSD, SUSE, CentOS, Red Hat) include ARM support as do a surprising number of languages and tools.

Everyone (except Intel) is looking for a viable competitor to Intel. Advanced Micro Devices has announced plans for an x86 ISA Xeon competitor in 2016 / 2017, and now OpenPOWER is gaining traction (with a full software ecosystem backing it). However, in most IT segments, customers seem to be struggling more with the questions of the public cloud, and what if anything they should put there, than with the question of an ARM Holdings server as an Intel alternative. In fact, most businesses are seeking an OpEx alternative to CapEx (which favors the public cloud) or at least a pay-as-you-go model. There have been rumors of ARM platforms in development by the public cloud providers, but there has yet to be a public proclamation. Certainly seems to be an uncomfortable position if all that separates one from their biggest, well-funded rival is price, and you can bet Intel is watching this market like a hawk.

Several companies have announced or are shipping products supporting Cavium and ThunderX (SC15 last year), and it is safe to assume they will support ThunderX2. They include Stack Velocity (1U storage server), E4 Computing (1S / 2U server with NVIDIA Tesla GPUs), Gigabyte (1S / 1U, 2S / 1U and 4x 2S / 2U server), Inventec (2S server platform), Penguin Computing (2S OpenCompute server) and interest from Cray and Lenovo. Will 2017 be the year or will the server space remain at “ARMs” length. For ARM Holdings, it better be! This is probably the last chance they’ll have to change things for a long time. In any event, the competition is good for the industry, and only time will tell.