Lenovo has been on quite a roll lately in PCs and phones.  They recently took the #1 global PC spot from Hewlett-Packard and have the #2 smartphone share in China.  As a company, Lenovo is very interested in driving 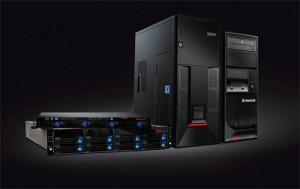 revenue beyond the PC, and while its smartphone business has received a lot of attention, their server business has not.  Can Lenovo repeat what they’ve done in PCs and smartphones in servers?  While we have published a detailed research note and SWOT analysis here, I’d like to summarize.

In today’s server market, there is much focus on the big three, Dell, Hewlett-Packard and IBM, who collectively hold approximately 70% of the unit shipments (68.4% in Q2 2013 according to IDC).  The top two, Dell and HP truly control the market volume with IBM holding a very distant third in units, having declined over the last few years to just 11% of overall server unit shipments as of Q2 2013.  Talk often focuses on Cisco, who is growing quickly particularly in blade servers but off of a very small base, as they are pushing hard to get themselves into the high volume market. Rarely does the name Lenovo come up unless someone is discussing the IT market in China, but Lenovo remains one of the few players who could break out of the “other” category in the market share reports, even surpassing Cisco and Fujitsu (the current #4 and #5) in unit shipments.

However, to truly grow share, Lenovo needs to put a concerted effort on servers and has more than a few challenges to overcome.  Below is our analysis of their current position and challenges.  You can find a very detailed analysis here.

To understand how the company is positioned in the market it is important to look at their strengths, weaknesses, opportunities and threats.  The standard SWOT analysis covers the state of their current business and potential for the future.

Overall we see that Lenovo is at an interesting crossroads in the server market. To be successful they need to be investing significantly in the server market as that is a long term play.  Whether it is a build or buy decision, this will not be a small investment. The dividends, in terms of revenue growth and more margin to the bottom line can’t be ignored.  While very respectable in revenue, IBM is a weak third in the market today based on their still declining unit volume, Cisco is pigeonholed in their position in blades in the market, and Fujitsu has been in a fairly consistent position for several years (driven mainly by Japan and Germany.)  Lenovo has an opportunity to break out of their position and quickly move up in the market; as well they remain a company that could disrupt the market the way that Dell did years ago. But in order to do that, they need to get into the market in a serious way first.  We have published a very detailed research note and SWOT analysis here if you’d like a deep dive.