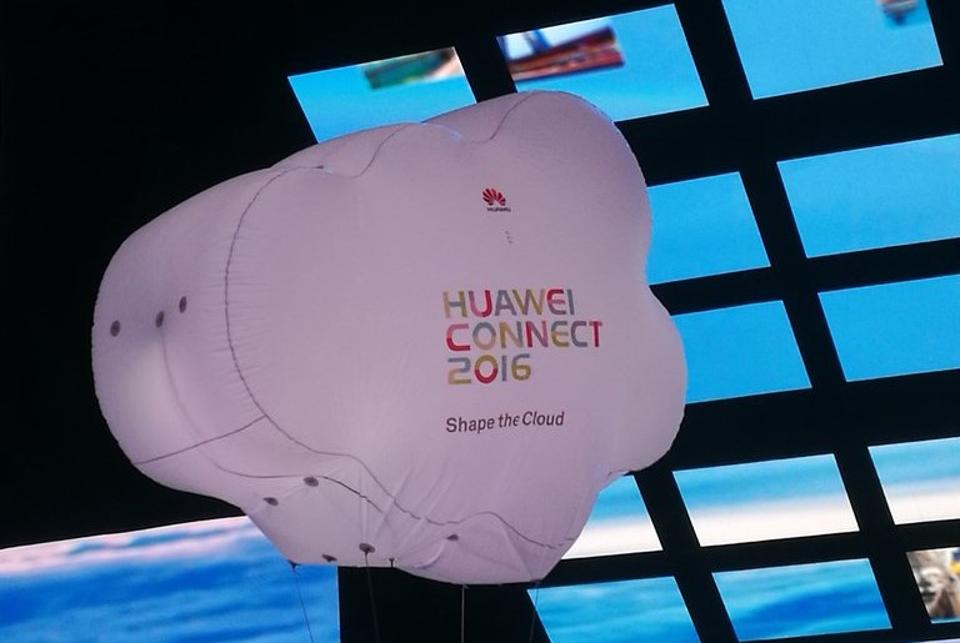 Huawei Connect 2016 was all about the cloud (Photo credit: Patrick Moorhead)

Huawei Technologies is a large, $60B China-based company that, while many in the U.S. may not be familiar with, is a very big name in the carrier and telco equipment and consumer smartphone space—especially in China and EMEA (Europe, Middle East, Africa). The company is making serious moves to expand their reach into the carrier and enterprise cloud and take on the role of a “global ICT leader” and believes that the “C”, “communications”, in “IT” will make the difference.

I attended Huawei Connect 2016 in Shanghai a few weeks ago along with approximately 20,000 Huawei ecosystem partners, customers, press and analysts. This was the company’s first integrated conference—combining the three separate Cloud, Network, and Developer’s Congresses Huawei has traditionally held. The theme of the conference was appropriately titled “Shape the Cloud,” and it was their first big opportunity on the public stage to demonstrate the company’s new global cloud trajectory.

This isn’t a research paper, research brief and I am only doing an overview from their CEOs keynote address and subsequent meetings, but I may follow up with those details if there is interest. Also, I will be focusing on carrier and enterprise, not their consumer business.

Before we dive into Huawei Connect, I wanted to provide some background on Huawei for those unacquainted with the company. First off, they are a very large company in revenue, racking up $60B in 2015 and their recent 2016 financials are putting them on a much bigger track as the first half they saw 40% growth. Huawei was founded in 1987, and are privately-owned by 85,000 Chinese employees. The other 90,000 non-Chinese employees, though they cannot own it, are provided tracking shares in the company so they can enjoy in the upside. While they aren’t public, they do issue audited topline financials every six months.

Over half of their $60B 2015 revenue comes from China (42%), and the rest from EMEA (32%), APAC (13%) and the Americas (10%). They’ve yet to make serious inroads in the Americas, but we could be seeing more growth in that direction. Huawei takes an interesting, non-committal stance on the U.S. It’s kind of a “we don’t need to be successful here but it would be nice.” 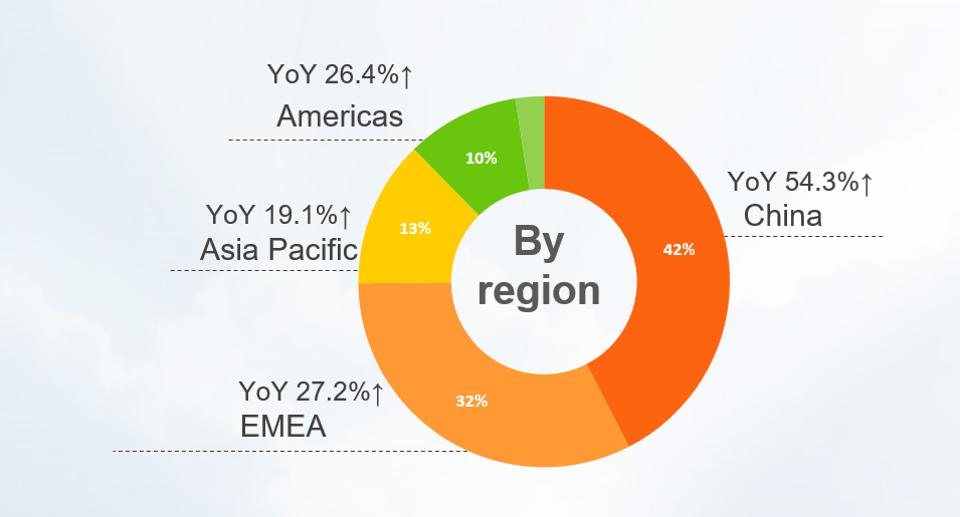 $36 billion (60%) of Huawei’s 2015 revenue came from the telco and carrier market. This has historically been their bread and butter—they claim 45 of the top 50 telcos under their umbrella, excluding notable exceptions such as AT&T, Verizon, and Sprint. The rest of their business is comprised of 33% consumer ($20 billion), and 7% enterprise (a small, but quickly growing $4 billion).

In the carrier and telco space, Huawei competes with Ericsson and Nokia, both who are having their challenges. Ericsson’s CEO was pushed out by the board this July and Nokia’s Networks business was down 11% YoY for Q2. Huawei holds the #1 smartphone unit share in China as Lenovo and Xiaomi declined and are #3 globally to Samsung and Apple. The most impressive thing about Huawei’s smartphone ascension is that they aren’t just doing cheap, they are increasing share in the midrange and premium smartphone space.

Another interesting tidbit is that Huawei employs an innovative rotating CEO system, wherein three senior executives take six-month turns as acting CEO of the company. That hasn’t worked well at any other company before I’m aware of, but seems to be working well so far at Huawei.

Current rotating CEO Ken Hu delivered the Day 1 Connect 16 Keynote—the first half of which focused on the usual meta-concepts of digital transformation, IoT, the cloud, and preparing for what Hu referred to as the “intelligent world.” He differentiated between what he called the current Cloud 1.0 era- based on “agile innovation, good user experience, and low costs,” and impending Cloud 2.0 era, “in which enterprises are the main players, and we will see the rise of countless industry clouds.” Hu went as far as to predict that by 2025, more than 85% of enterprise applications will be cloud-based.

It’s that new era in which Huawei is trying to position themselves as the “Enabler and Driver of the Intelligent World.” The second half of the keynote outlined Huawei’s overall strategy: staying customer-centric, providing innovative cloud technology, becoming their customers’ preferred partner, and proactively contributing to the growing cloud ecosystem.

I have attended many big tent events and there wasn’t much here I hadn’t heard in other keynotes the past few years. Huawei did introduce the “industry cloud”, but this is a new word, not a new concept as it is basically it is a vertical approach to private clouds. Clouds are vertical now and vary by workloads, latency, responsiveness, security, regulation and scalability. I like it, it’s not new, and it underlines Huawei’s vertical approach which I saw everywhere at the show.

Customer centricity through customization and “open”

Hu touted the company’s 28 years of customer-centricity, saying it is part of Huawei’s DNA. Every company says they are customer-centric and in the west most IT companies have stopped using the term because customers are skeptical. I do believe Huawei when they say this as they appear to do so many customizations for their customers. 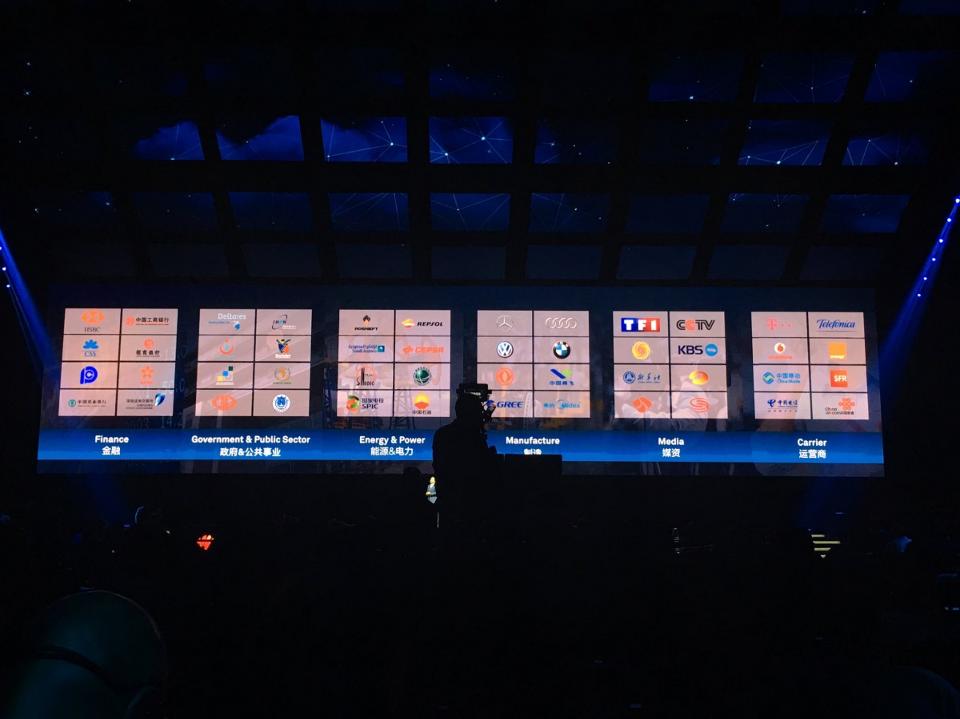 Hu went on to say that as technology providers, a one-size-fits-all approach isn’t always the right solution—Huawei pledged to learn from customers and develop innovative cloud solutions that are right for their specific needs. Hu cited Huawei’s development of open cloud architecture as an example of meeting their large enterprise customer’s desire for independence and interoperability, and emphasized the company’s commitment to “openness, security, and enterprise grade performance” in all of their cloud solutions.

I was a bit skeptical at first about the “most open” approach as everyone says they’re “open”, the Linux Foundation executive director Jim Zemlin literally got on stage day two and said Huawei leads in “open”. Not “a leader”, “one of the leaders”, but “THE leader”. That blew me away. 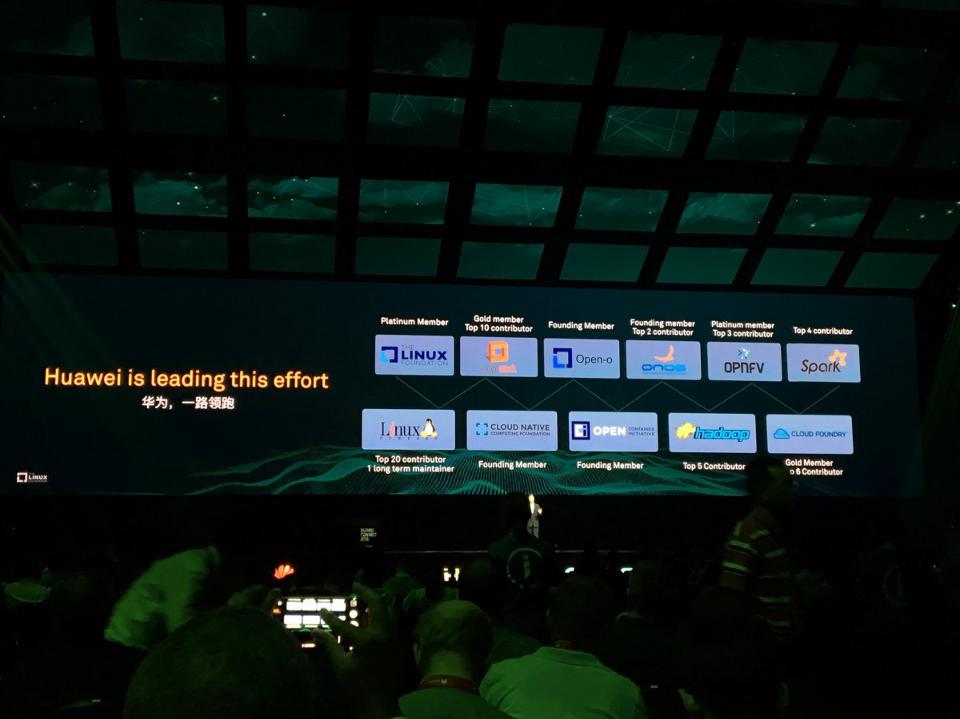 Strategic partner to drive beyond the “dumb pipe”

The next key part of Huawei’s strategy is being more than just a vendor to their customers—being a true strategic partner. Like customer-centric, pretty much all IT providers say they are strategic. Hu highlighted Huawei’s work with Deutsche Telekom (a German telecom company) as a case study: this past June, Deutsche Telekom released their Open Telekom cloud, a set of private and public cloud services and software solutions developed for the enterprise. They partnered with Huawei to provide hardware and software solutions for the project. Harkening back to the previous point, Hu said that the most noteworthy aspect of the collaboration was that Open Telekom was “completely driven by customer needs,” and said that so far the product had been receiving widely positive reviews but no indication from DT on revenue.

I believe Huawei is dedicated to and trying very hard to be a strategic partner to the carriers. I think Huawei can deliver the carriers what it takes to help them, but I question whether the carriers can pull it off. I have to start off with some background. Carriers aka “telcos” try their hardest not to be relinquished to the non-differentiated “dumb pipe”. You can differentiate a pipe, and carriers are globally all trying to provide value-add services to the consumer and/or the enterprise. In addition to video services, Huawei is helping carriers to fulfill their desired goal what I will call the “carrier cloud”. The carrier loud is all about providing services like Amazon AWS, Microsoft Azure, IBM SoftLayer and Google Cloud provide today and more as workloads sub-segment and advance even more in the future.

I see a potential edge IIoT (industrial IoT) carrier play, but I am very skeptical about everything else. Carriers haven’t exactly been lighting the enterprise world on fire and aren’t investing like the “Super7” cloud giants. This is Huawei’s best play and are playing it even better than Ericsson and certainly bring a lot more to the table than Nokia.

The biggest question for me still on Huawei’s “data play” is how they stack up to Cisco Systems, Dell EMC, and Hewlett-Packard Enterprise whose business is the private and hybrid. Huawei has the carriers attention and does have enterprise capabilities, but the others have 25 years’ enterprise experience and are more focused than ever. Enterprise is 7% of Huawei’s current business and 100% of Cisco, HPE and most of Dell EMC’s business. Huawei will do very well in the “carrier cloud” and will grow in the enterprise for sure, but they have a whole different kind of competition in the cloud.

The last big point Hu emphasized was Huawei’s commitment to the development of the cloud ecosystem. Instead of simply releasing “a handful of clouds on its own,” in Hu’s words, Huawei is looking to help their customers build a variety of different clouds—in turn building out the entire cloud ecosystem. Huawei also has strategic business alliances with some big names—SAP, Accenture, Microsoft, and Intel, to name a few. 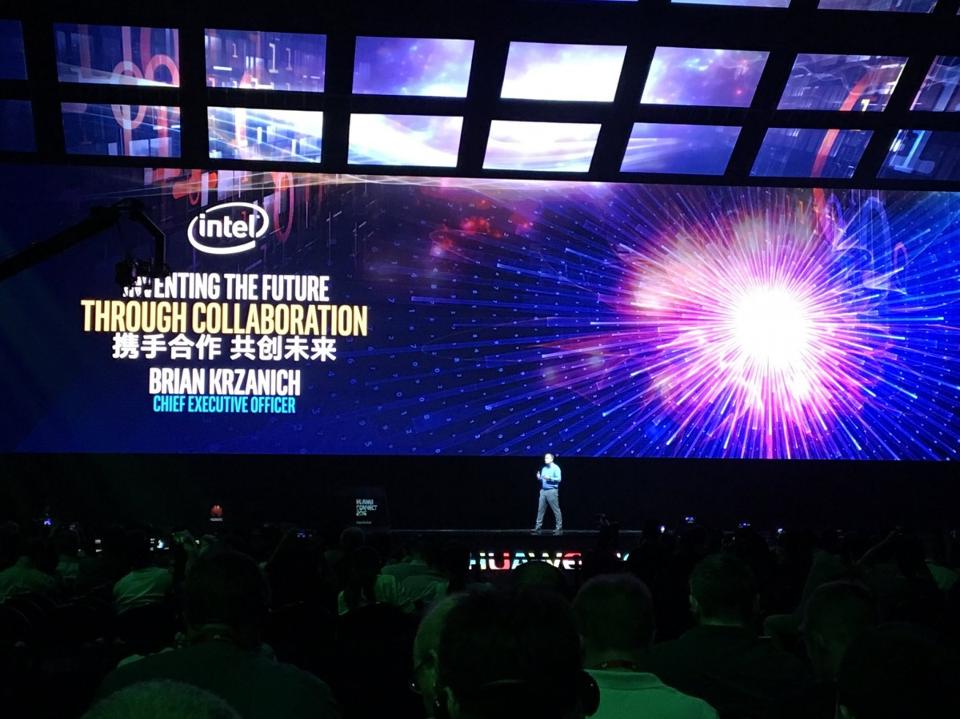 According to Hu, these alliances help promote openness, collaboration, and shared success for everyone, which in turn guarantees the ongoing development of the cloud ecosystem. He went on to stress the importance that everyone involved in the cloud ecosystem bring their unique strengths to the table, concluding the thought by saying, “We are Huawei. Our role is to make good products and serve our customers well.”

I’ll admit, I was initially surprised to see SAP’s and Accenture’s aggressiveness, but when you drill in, where Huawei is successful, SAP and Accenture want to be more successful, and vice-versa. Also, having Intel CEO Brian Krzanich on-stage day 3 I thought was a big deal.

Huawei Technologies is an impressive company. The company is a force with carriers and in smartphones. At Connect 16 in Shanghai, they did a good job communicating what they want to do, who they want to do it with and why they want to do it, but it was challenging to parse why they are better at what they do. I think the answer could lie in R&D and innovation. Huawei invested $9.2B into R&D in 2015, $38B over the last ten years which puts is in the top 5 of all high tech. They are also a leader in PCT (Patent Cooperation Treaty) published patent applications. Patents don’t guarantee future success but certainly is a leading indicator for innovation. 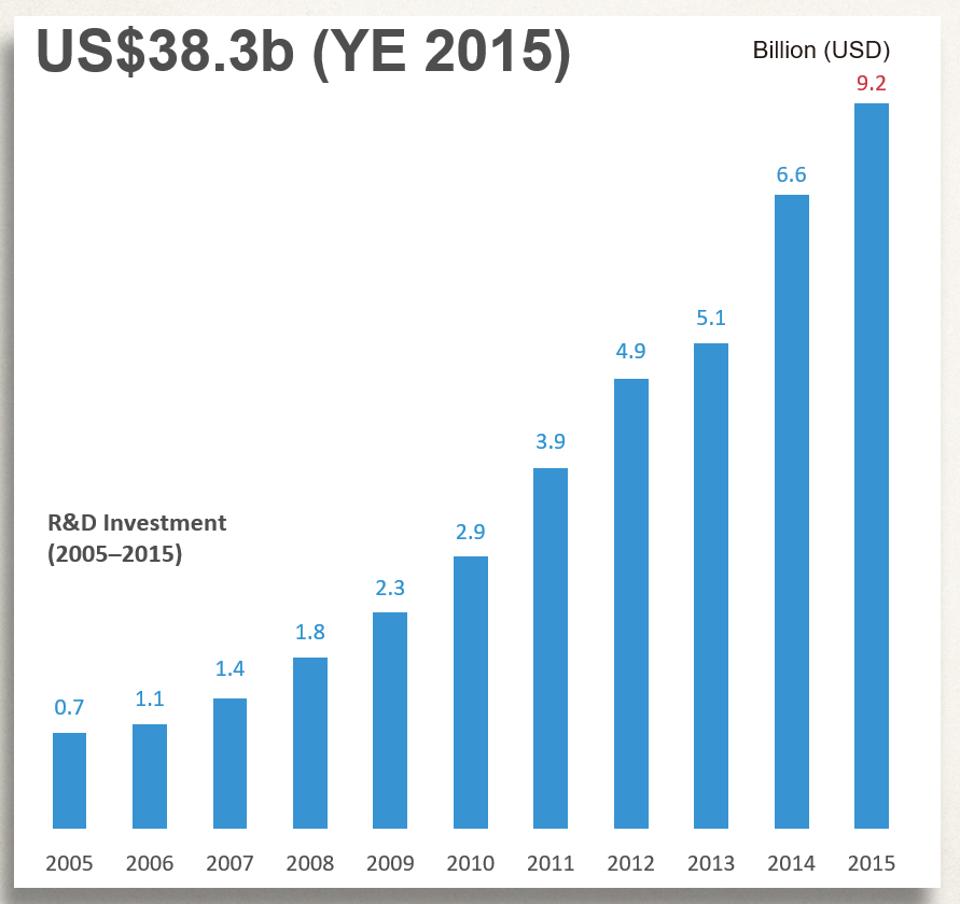 It’s still far too soon to say whether or not Huawei is going to pull of their reinvention into the enterprise and the carrier cloud. Huawei has a long, successful track record in the telecom industry with carriers, and while that won’t necessarily automatically translate over to cloud and the enterprise, it speaks volumes to the company’s ability to be competitive, innovate, and stay on top of market trends. It’ll be interesting too to see if this new trajectory allows them to gain more ground in North America and Western Europe where they haven’t had as much success as China, APAC, Eastern Europe, Middle East and Africa. I know the company will get big carrier wins, but what I’m most looking forward to are big enterprise cloud wins.