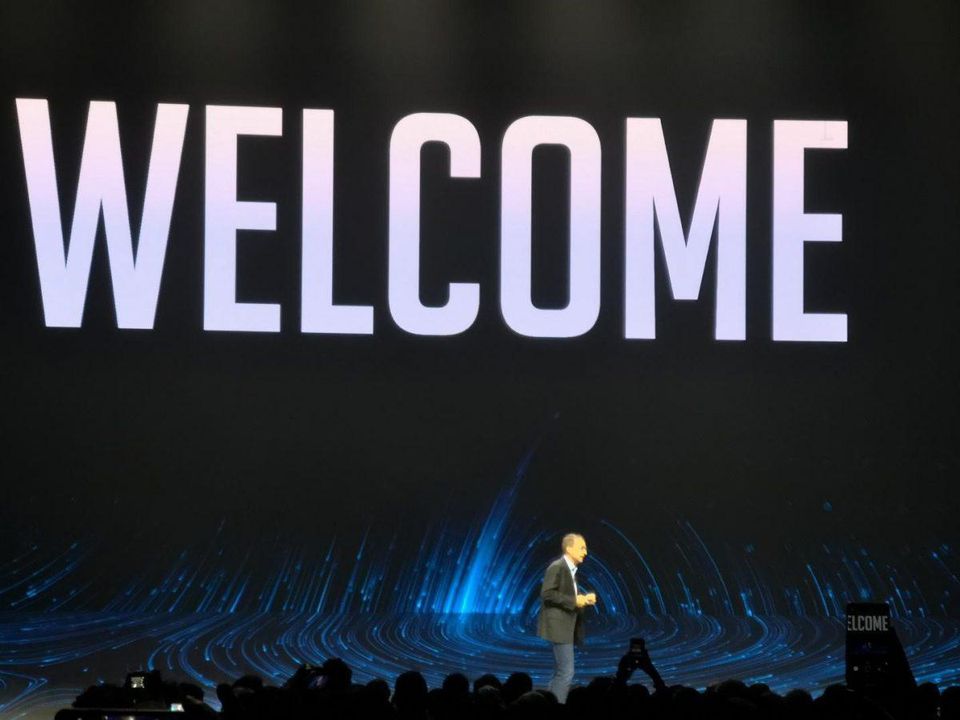 Five years ago, it appeared that VMware was going to end up like many legacy enterprise businesses, either overwhelmed by the public cloud IaaS (infrastructure as a service), SaaS (software as a service) offerings, or cheap private clouds.  To VMware’s credit, the company hunkered down and built out its own stack for enterprise private clouds, partnered with the leading public clouds, and is in the process of building out its own enterprise-focused managed cloud services to manage multi-cloud environments. VMware wants to maintain its relevant seat at the enterprise table and is doing just about everything to do that.

The stock is on fire, increasing from $44 in February 2016 to where it is today over $150. Stock price isn’t everything and I don’t always agree with Wall Street, but VMware is doing many things right. To the enterprise, VMware is the “safe choice” and in many ways, represents an “easy button” of infrastructure when compared to other on-prem, enterprise “stacks.” I hear that time and again from CIOs I talk with.

Last week, I attended VMware’s VMworld 2018 in Las Vegas, NV to get the latest on its strategies, offerings, and partnerships, and wanted to share with you what I consider the highlights.  VMworld, for those unfamiliar, is VMware’s big customer, channel, press, and analyst event—the company’s own version of, say, HPE Discover or Cisco C-Scape. I began my coverage of the week with a rundown on Dell’s newly announced expansion of its PC-as-a-Service (PCaaS) program, which you can read here if interested.

VMware CEO Pat Gelsinger did a stellar job as the ringleader of the General Session Keynote, driving home what the company calls its “multi-year any cloud, any application, any device strategy” with several technology unveilings and demonstrations.

I had the chance to talk with Gelsinger afterward and among other things, talked about the company’s lofty vision.  VMware wants to have a seat at every table, every app, cloud, and device on the planet and to me at first seems too broad and encompassing. Gelsinger is quick to clarify that it’s the infrastructure layer only and doesn’t encompass SaaS or consumer.  This absolutely narrows in the vision, is still very lofty, but “hey” it’s a vision statement. 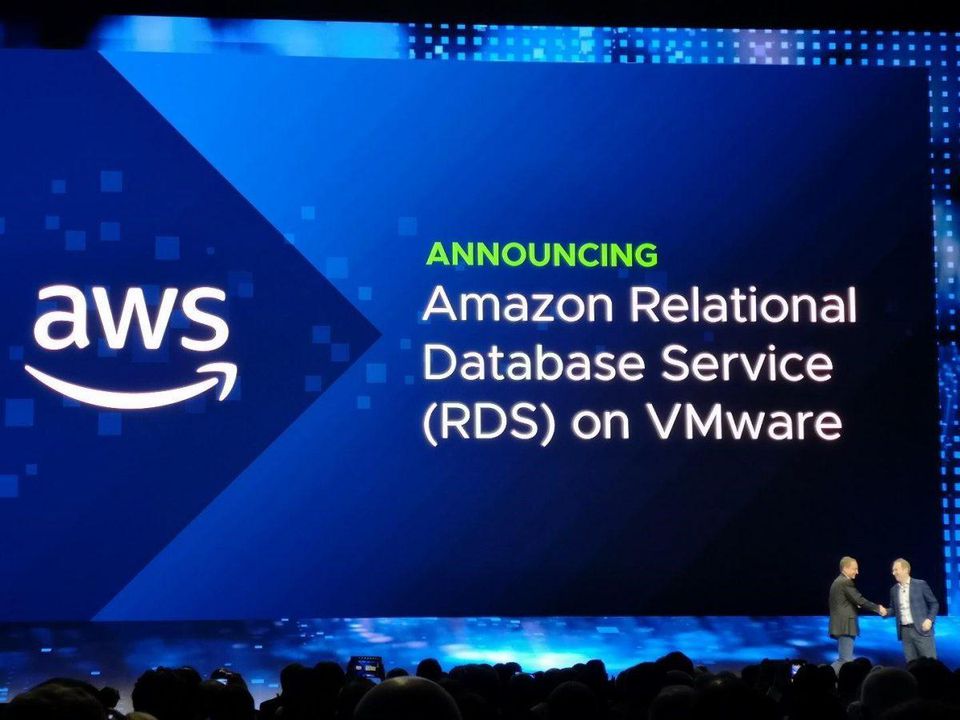 The biggest announcement out of the whole show was that the new Amazon.com Relational Database Service (or Amazon RDS, for short) would run on and be supported by VMware. This is a huge deal which should simplify the deployment, operations, and scaling of databases in VMware-based datacenters, making it easier to migrate them to either AWS or VMware Cloud on AWS. The crux of Amazon RDS is that it automates database management wherever the database is deployed, which could save customers significant time and trouble. This new service will support a variety of leading databases, including Microsoft SQL Server, Oracle, PostgreSQL, MySQL, and MariaDB. During the General Session, VMware gave a demonstration of how Amazon RDS runs on VMware in a private datacenter. VMware says that this essentially gives developers “a familiar RDS functionality” on VMware, in both private datacenters and Edge environments. Now we have AWS Greengrass and now RDS to run on-prem. And we thought AWS just operated in their own cloud. Surprise! This should give every company in the on-prem space a moment of pause.

Another piece of AWS news to come out of the event was that VMware Cloud on AWS will be expanding to AWS’s Asia-Pacific region. VMware Cloud on AWS, for those unfamiliar, is an on-demand service that delivers VMware’s Software-Defined Data Center software to the

Amazon Web Services Cloud. This allows its customers to run production applications across VMware vSphere-based hybrid cloud environments while enjoying the benefits of AWS services and disaster protection. VMware Cloud on AWS’s availability spans the U.S., Europe, and now, Asia-Pacific. We also learned more about the service’s plans for global expansion, with VMware announcing that it would be available in all AWS regions by the conclusion of 2019. I’ve been very impressed by how aggressively VMware has pursued getting this service up and running on all AWS Cloud GEOs. 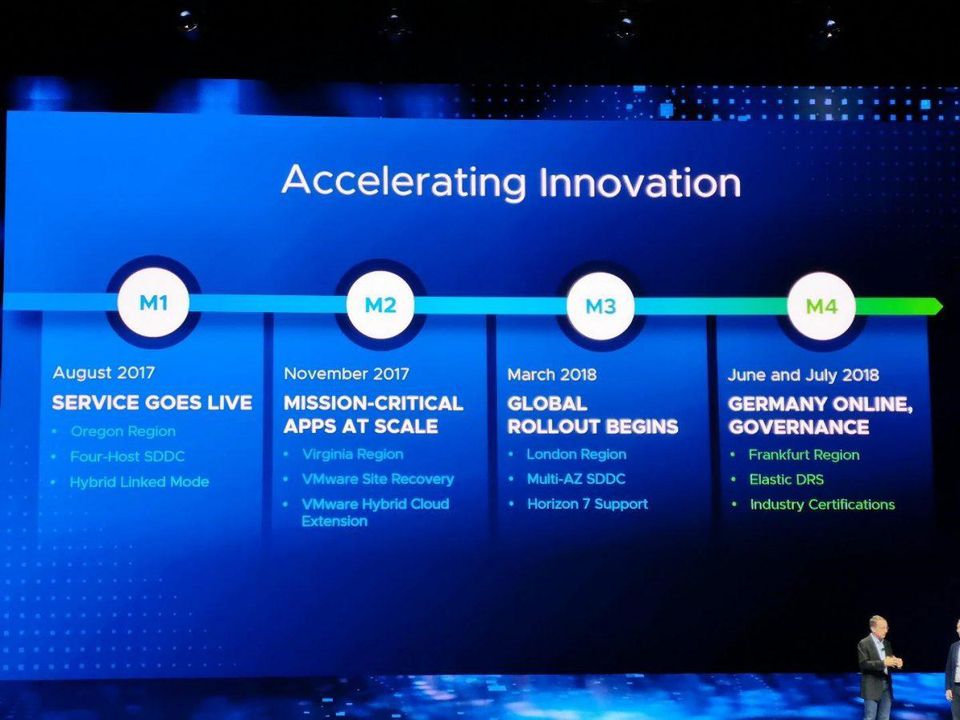 AWS and VMware have accomplished a bunch in a year.   PATRICK MOORHEAD
In addition to the geographic expansion, VMware announced several updates to VMware Cloud on AWS. These include a 50 percent lower entry-level price and a new, smaller, 3-host minimum configuration. Additionally, it announced license optimization for Oracle/Microsoft enterprise applications, including a new ability for customers to specify the number of CPU cores needed. Another update is the ability to live migrate thousands of VMs, with no downtime, with Instant Data Center evacuation. There is also a new high-capacity storage option for the service, supported by Amazon Elastic Block Store (Amazon EBS). All these enhancements were to be expected.

VMware may have stated support for Amazon AWS, Microsoft Azure, Google GCP and IBM Cloud, but it’s clear who is VMware’s lead, strategic lead partner, it’s AWS. I expect VMware will support all the big public cloud player’s databases on-prem at some point, but unless something dramatically changes, AWS will be lead dog for all meaningful and deep integration.

Improvements to Workspace ONE 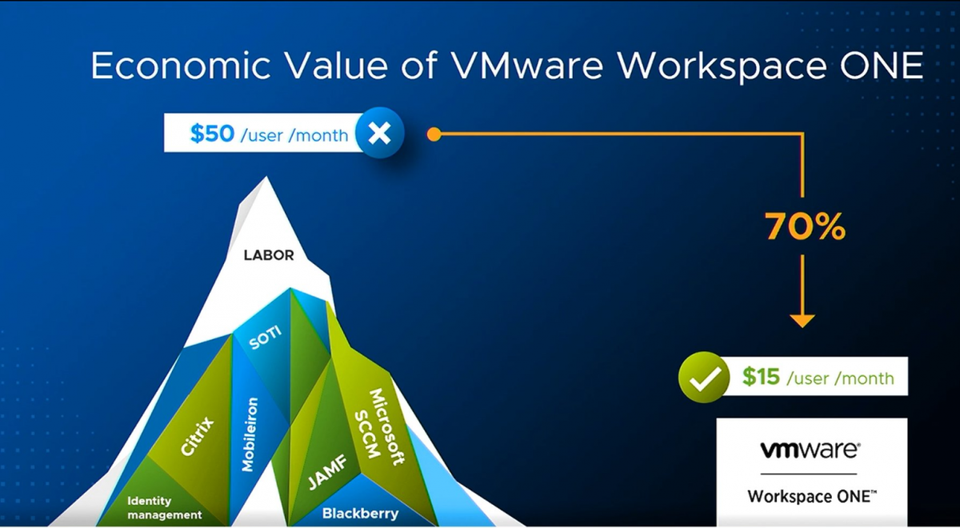 VMware does a good job positioning the integrated value of Workspace ONE.   PATRICK MOORHEAD

Also announced at VMware were a series of new innovations for Workspace ONE, the company’s digital workspace platform. VMware announced Predictive Windows 10 OS patching for Workspace ONE Intelligence, VMware’s cloud-based service designed to deliver data-derived insights and automation across the workspace. A new collaboration between Dell and VMware was also announced, called Dell Provisioning for Workspace ONE, which will grant customers access to pre-installed Win32 apps on Dell PCs. Basically, ship the device to the employee anywhere, turn on, and everything is restored and secure. This is the way it ought to be—there’s no reason for IT to unpack and OOBE (out of box experience).

Additionally, VMware announced the general availability of the Workspace ONE Airlift connector to Microsoft System Center Configuration Management (SCCM). VMware says this offering will enable customers to “speed and de-risk the transition to Windows 10 modern management” by automating the migration of SCCM applications and collections to Workspace ONE. While I wouldn’t say “de-risk” it certainly reduces the risk of a mass Windows 10 deployment over SCCM.

VMware announced several new Workspace ONE end-user services geared towards enabling app innovations. These include the beta release of the Workspace ONE Notebook app, which enables more secure, containerized tasks and notes for employees using personal smartphones and tablets. With more and more workplaces embracing work-from-anywhere mobility, security on these devices has never been more important—it’s good to see VMware digging more deeply into this. Also announced was the Expanded Workspace ONE SDK, which VMware says enables enterprise app development in compliance with IT and business requirements for security, manageability, privacy, and more.

All in all, I like the way VMware is positioning WorkspaceOne—classic “integrated and convenient,” versus “best of breed and DIY.” When the work of integrating multiple client computing security, deployment, management, and update tools outweighs the incremental benefit, time and cost, it’s time to look more closely at an integrated package.  My company is seeing this trend a lot in the datacenter security market. 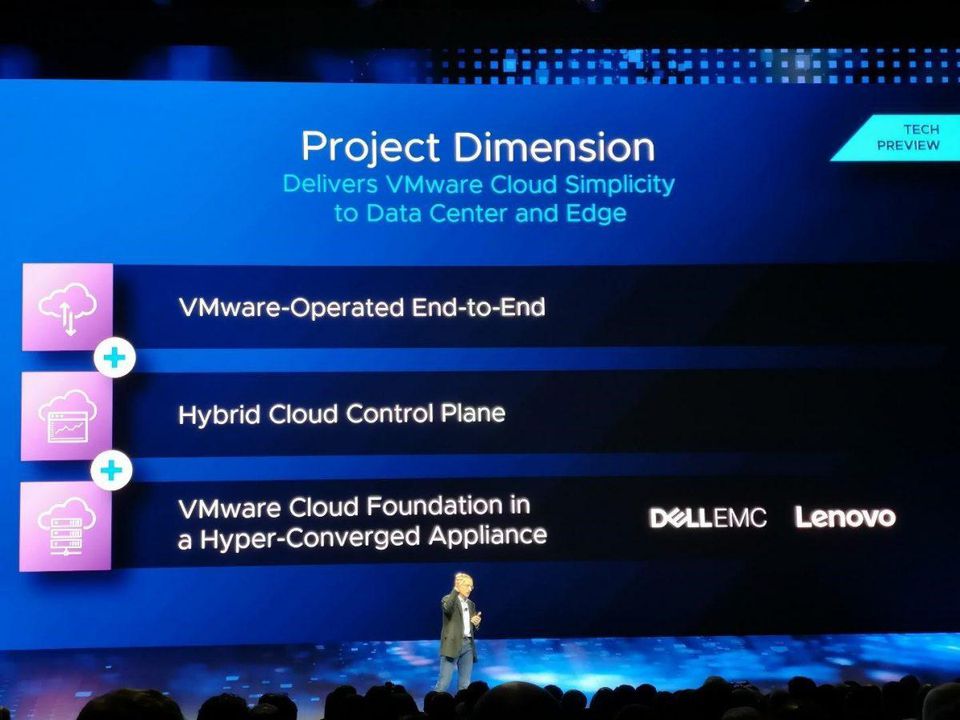 There were also several Edge-related announcements from the event that I wanted to highlight. First, I wanted to mention Project Dimension, which was unveiled during the General Session. Project Dimension represents an effort to extend the benefits of VMware Cloud to the datacenter and out to the Edge. Essentially, Project Dimension combines VMware Cloud Foundation (in a hyperconverged form factor) with a cloud control plane, which will result in an end-to-end service for software-defined infrastructure. From what I see on paper, this should help reduce operational complexity and save some money at the data center and edge, while delivering built-in security.  VMware seems late to the party on edge computing, but its seat in the datacenter and client virtualization could help it catch up with others like Microsoft and AWS. 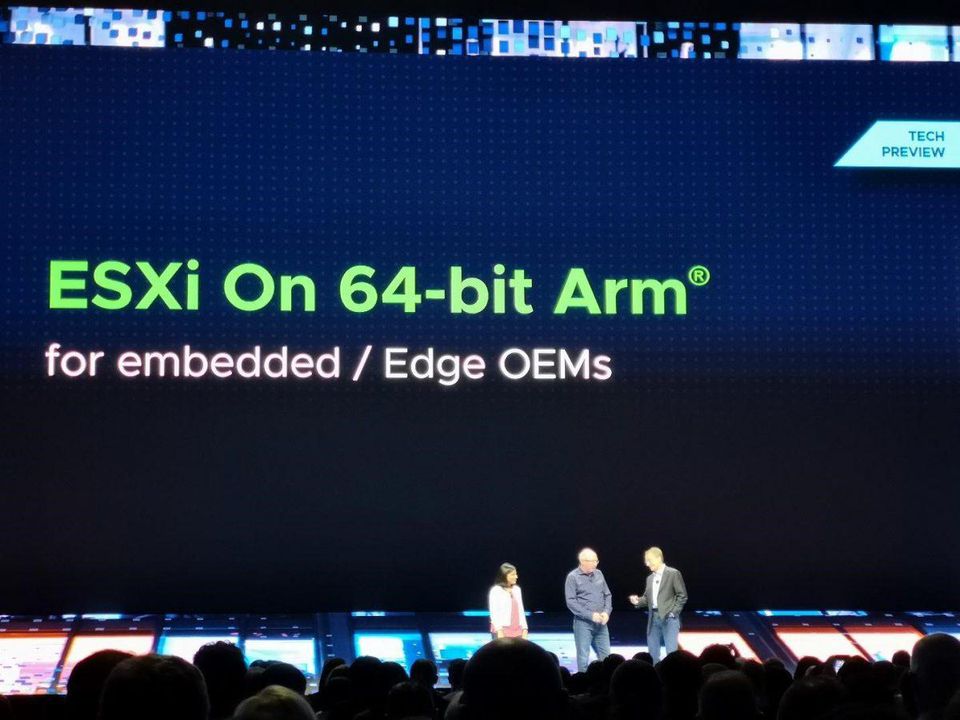 While not positioned as an edge announcement, the other significant announcement I consider an edge announcement was VMware’s support for ESXi on Arm architecture. ESXi is a lighter-weight, bare-metal hypervisor that I could see running on smaller Arm-based edge servers. Details are light, but makes sense, given Microsoft and RedHat have all embraced Arm-based architectures in one way or another. VMware was looking like the “odd-man-out” for not supporting. 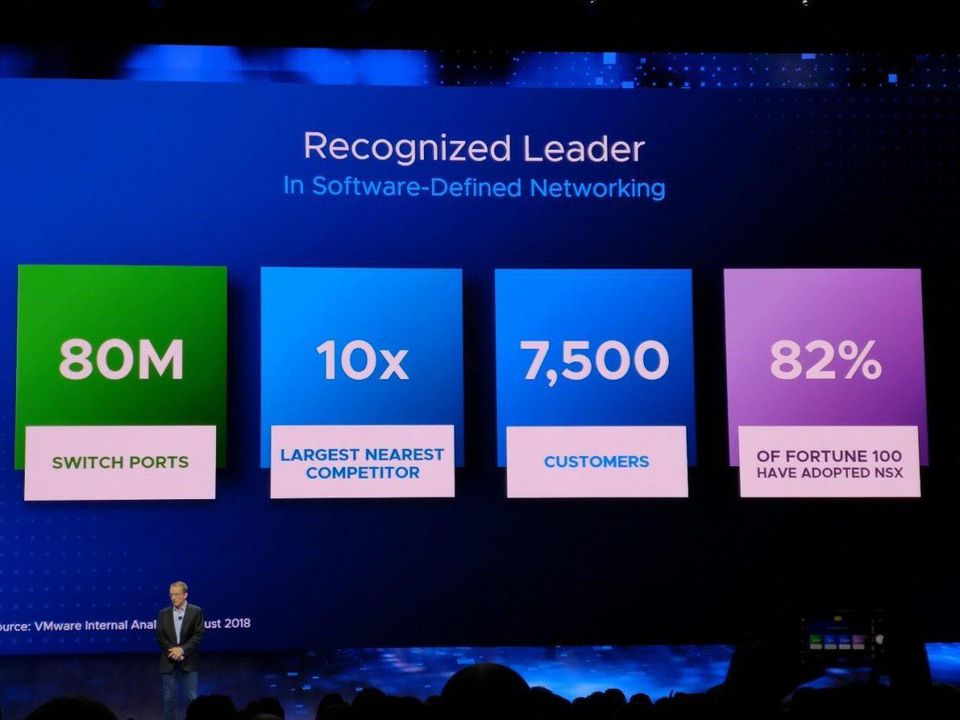 VMware is having early success with NSX SDN.   PATRICK MOORHEAD

VMworld 2018 demonstrated that VMware is moving the ball down the field with respects to paying off the VMware “multi-year any cloud, any application, any device” vision.  The event wasn’t an ending point, but rather a stop along the way to fulfilling that vision.

VMware has a lot of work to do, including building out many new linkages, upwards and downwards with AWS, Azure, GCP and IBM Cloud while staving off pure-play HCI competitors and partners like Nutanix. It also has a lot of work on pulling together its software-defined attacks across compute, storage and networking in an easier way for smaller businesses or those with smaller IT headcount. This is a risk for VMware that it always needs to be keeping an eye on, but after talking with COO Sanjay Poonen and its competitive approach, I feel pretty good about it.

VMware seems to be in everyone’s business in one way or another and diplomacy is paramount. When I talked with Pat Gelsinger on managing coopetition, he told me that VMware does this “carefully”, “thoughtfully” and “likes to turn relationships into positives.” I think that is a good place to be, is more than “motherhood and apple pie”, and works best until one party gets into a dominant position.  It will be interesting to see how coopetition goes if VMware does well in its managed, multi-cloud services. Gelsinger and COO Sanjay Poonen are smart people and are sure they and the board have thought ahead a few chess plays. If not, they should.

That concludes my quick take analysis of VMworld 2018. Stay tuned for more in-depth coverage from Rhett Dillingham, our public cloud analyst, Steve McDowell, our storage and HCI analyst, and Will Townsend, or enterprise networking and SDN analyst.