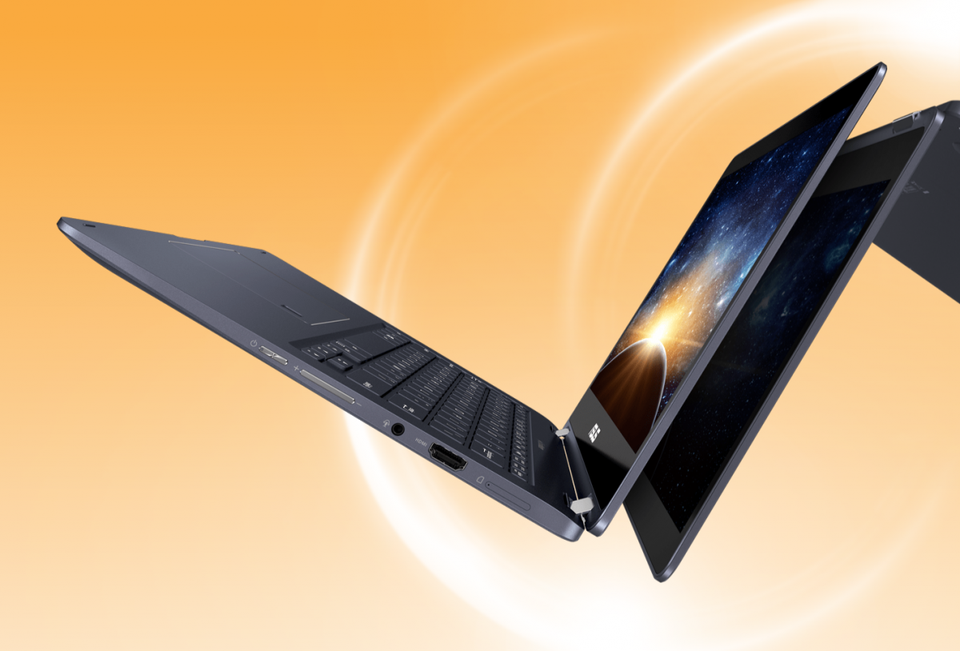 I spent a decent amount of time with the Asus NovaGo laptop, and I recently took it with me on a 4-day trip to Cisco Live. On this trip, I only brought the NovaGo and no other PC (which is rare for me). This allowed me to fully experience the NovaGo in my working environment and use it like I would my Apple iPad Pro and PC. The NovaGo is unique because it is another one of the Windows on Snapdragon PCs that feature an ARM processor running Windows. The NovaGo is different from the HP Envy X2 I had previously reviewed in that it has superior LTE connectivity with a 4×4 MIMO LTE configuration. The model I was using had 6GB of RAM and 128GB of storage and a 13.3” 1080P touch display with 100 sRGB color gamut.

My productivity use case and apps

My primary use cases were around daily productivity that would one expect to do while on the go at conferences. I extensively took notes using OneNote and then wrote reports in Word. Because I use Office 365, both OneNote and Word utilized cloud connectivity and the laptop’s built-in LTE connectivity. This was the same case as my usage of email in Outlook which is pretty much useless without an internet connection. I also used the latest version of Microsoft Edge browser for doing research and social media outreach.

In addition to those applications, my use cases included a mixture of productivity and media & entertainment apps that both came from the Microsoft Store and those I downloaded from the web to my desktop. This is important to note because desktop apps are more likely to run in emulation mode rather than Windows Store apps which should be more optimized for Windows on Arm. For desktop apps, I used Office 365 with G Suite Sync to my business accounts as well as WebEx, Chrome, Zoom, WhatsApp, Snipping Tool, Edge, and OneDrive. For Windows Store apps, I used Twitter, Facebook, LinkedIn, Mail, Calendar, People, Photos, Hulu, Netflix, Instagram, Movies & TV, News, and Adobe Reader. I stayed always connected on the NovaGo via T-Mobile using a nano-SIM card inside of the device.

The NovaGo has one awesome feature that makes it extremely attractive and that’s simply described as insane battery life. I’m not the only one, my colleague Anshel Sag saw the same thing as did Mark Hachman at PC World who said, “The Asus NovaGo delivers the best battery life of any PC we’ve ever seen.” In addition to having amazing battery life, the NovaGo is reasonably priced over at Amazon for $699. I also like that the NovaGo is a convertible clamshell that can be used as a tablet, but I only used it as a laptop for productivity. The NovaGo is also relatively thin and light, at 0.6” and 3.1 lbs, but I think it could be lighter, but I preferred the choice to go with a metal body construction. 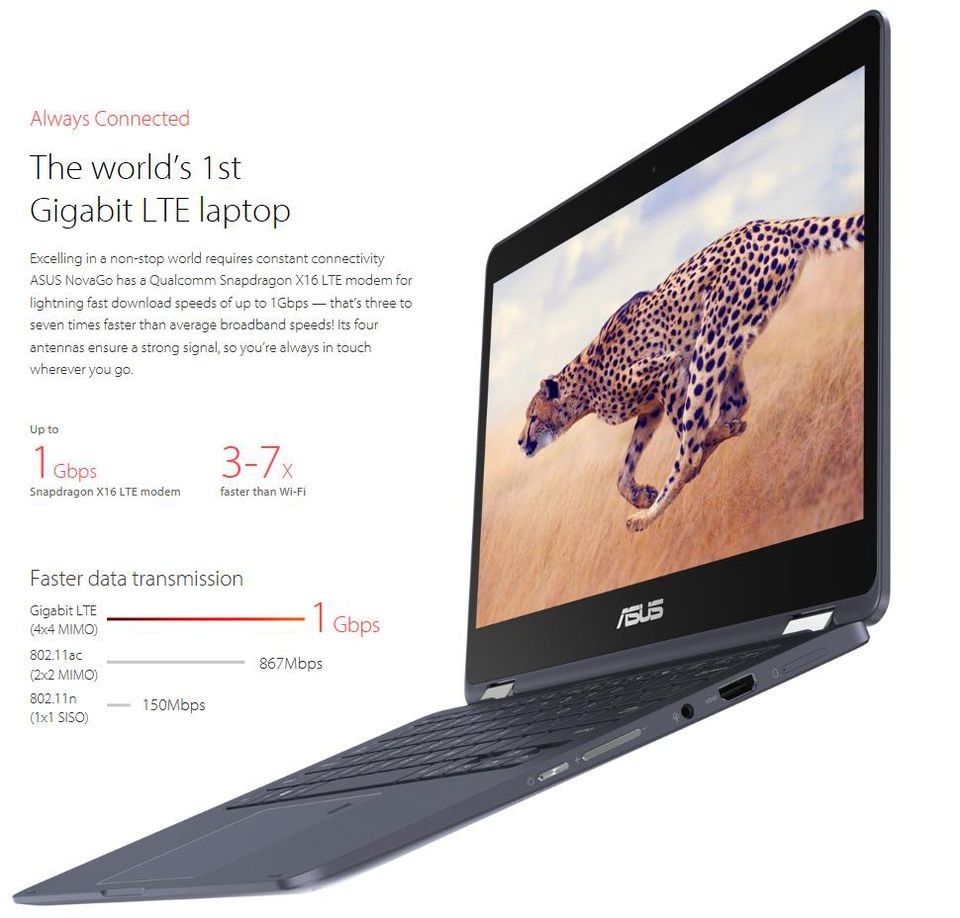 I love the fact that it has 4×4 MIMO with 4X carrier aggregation which enables it to have gigabit LTE with a peak download speed of 867 Mbps, making the LTE connectivity theoretically faster than the Wi-Fi, something unheard of on a laptop in the past. In addition to the LTE, the NovaGo has 2×2 MIMO 802.11AC.

I also like that this laptop has two full-sized USB 3.1 ports which make using accessories easier. On my trip, I used a USB-adapter for RJ-45 ethernet connection. In addition to having full-sized USB, the NovaGo also has a full-sized HDMI port which means there’s no need for adapters. I was impressed by the large glass-covered touchpad which felt good and had a very fast integrated Windows Hello-enabled fingerprint reader which translated to nearly instant-on usage.

While I would’ve preferred an eSIM, US carriers aren’t supporting it yet, but the SIM slot was rugged and easy to use, unlike other ACPCs I have previously tested. Last but not least, it has a nice array microphone which makes summoning Cortana very easy.

My experience with the NovaGo was mostly positive, but there were still a few things that I would like to see Asus possibly change in the next NovaGo. One of the most noticeable things was that the Bluetooth was a bit flaky and it managed to drop two different Microsoft BT mice randomly. In addition to Bluetooth connectivity, the keyboard was a major weak point without backlighting and generally squishy keys which resulted in many mis-strikes. The keystroke travel was also a meager 1.4mm of travel, making each keystroke less tactile and satisfying. In addition to these two things, there is no USB Type-C port which is on nearly all modern laptops today. While I haven’t run into a use case yet where I thought I need a USB-C port, that port is usually also the charging port which is good to standardize around.

For some reason, likely cost, Asus decided to go with a proprietary charging connector which goes in the face of everything you see from virtually everyone nowadays as far as USB Type-C charging. The 6GB model that I had also run low on memory when using multiple tabs, so I would advise that you consider getting the 8GB model as my colleague Anshel Sag didn’t seem to have issues with running out of memory on his. I also didn’t like how Asus handled the function keys; they aren’t being used as quick keys for brightness, etc. Who does this on a consumer platform? I’m not sure why they made this decision, but it seems weird to me.

Always Connected PCs are designed to be mobile, always on, always connected with crazy battery life, but they aren’t currently designed to hit every gamut of use cases. My software performance on the Asus NovaGo was the same as the HP Envy X2 I had previously reviewed so please read that review to get details.

I can’t recommend PC games or video editing yet, but I can recommend using Outlook downloaded from the Microsoft Store, Edge, OneNote, and Word. As this system only has 6GB, I cannot recommend Chrome as it eats memory for breakfast.  The Windows 10 April Update gave major experiential boosts that are not reflected in prior reviews if you were wondering why my experiences may sound different from others.

The good thing about the ACPC platform is that it will only get better with the new Snapdragon 850 that will be out later this year. While I don’t have any insider knowledge of whether this exact model will be available with the Snapdragon 850, it does make some pretty significant performance and efficiency improvements. Those will be welcome with the next generation of this device if Asus decides to make it. Asus is already onboard for the Snapdragon 850 generation of devices, but I don’t have any details of how that will look.

Looking even further down the horizon, chips based on Arm’s upcoming A76 CPU architecture in 2019 will be even more powerful and competitive while also remaining power efficient.

The NovaGo’s display is brought enough for daily usage, although not as good of a display in my opinion as for the Envy x2. Yes, the bezels on this laptop are pretty thick for today’s modern bezel-less design, but they were likely needed for more antennas and to be able to squeeze more battery in the bottom of the base. I can’t speak to the audio or video quality on the NovaGo so that I will reserve judgment there but there are plenty of others that have, and there have been some mixed opinions.

The Asus NovaGo is part of Qualcomm’s first try at giving Windows a second go. This time around, the operating system is more catered to the uniqueness of the platform and can harness the strengths like connectivity and battery life. While performance is still something that everyone is looking to attain, I believe that we will see some serious performance in the coming generations. The NovaGo feels like a decent laptop for $699 with fantastic battery life that could have been a great laptop if not for a few misgivings. Hopefully, we’ll see more sleek and modern designs from ASUS in the future utilizing this platform, and perhaps they’ll even introduce new form factors as well.

Note: Analyst Anshel Sag made contributions to this blog.