Since their inception, I have had to dig deep to fully understand why some consumers would gravitate to a phone the size of a 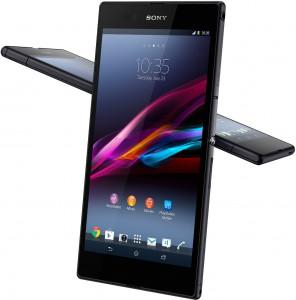 tablet.  “Phablets” are too large to fit into pants pocket or small purse, don’t get better battery life than a phone, can’t be used one-handed, and look absolutely ridiculous when talking on the phone.  I’ve seen consumer research too, but until I had the chance to try the Sony Xperia Z Ultra, I still didn’t get it.  After using a phablet for a month, I get it.  Phablets are the ultimate media phones and I wanted to share my experience with you that drove me to that conclusion.

I have to first give Dell credit for introducing the first major “phablet”.  In 2009, when the smartphone world was 2.5”-3.5”, Dell released the Streak 5, a 5” phone/tablet combination for business.  The phone didn’t sell well, primarily based on the poor experience driven by the fledgling state of Android at the time and was quickly discontinued.  It was Samsung who popularized phablets globally with their Note and Galaxy brands.  Aside from Apple, the entire industry has shifted to 5” and larger displays for their premium smartphone lines.

According to NPD’s Stephen Baker, phablets, phones 5” and above, sold in the U.S. from June-August were purchased by consumers who skew “very heavily” to wealthy buyers.  Interesting to me, there was a very small difference in gender preferences between all smartphones and phablets, only 3% skewed toward males.

The Sony Xperia Z Ultra is a beautiful beast of a phone, which, I know, is a contrast in terms. But this phone is a contrast in terms.  It’s big with a 6.4” display, thin at 6.5mm, heavy at 212 grams, made of sexy-looking glass on each side, yet waterproof and surrounded with cheap-feeling plastic doors. The Ultra has a beautiful, 1,920×1,080 (1080P) display pumping out an impressive 342 PPI (pixels per inch). You won’t see any pixels here, even if you are hopelessly near-sighted like me. Now let’s get into the guts.

The Ultra packs the highest-performance Qualcomm SoC and wireless you can get on the market today, the Snapdragon 800. The Snapdragon 800 processor brings with it a 2.2 GHz custom-designed (via architecture license) “Krait” quad core CPU, custom “Adreno” 330 graphics, and a custom, third generation “Gobi” LTE modem capable of CAT4 150 mbps speeds (carrier dependent).

Now I want to drill into two usage models, games and video, to show what these technology can do.

My phablet games experience with the Sony Experia Z Ultra was quite positive, particularly playing on its 6.4” 1080P display.  While thin and large, the form factor felt solid in my hands as my thumbs could travel from top to bottom, making it very comfortable.  The combination of the Adreno 330 GPU and Krait CPU was more than sufficient to blow through all the FPS (first-person shooter) and racing games I play, which stress most any graphics subsystem.

On each game, I maxxed out settings as much as I could (if possible) and saw all the details without any stutters, tearing, or defects.  I played Riptide GP2, GTA III, Real Racing 3, Asphalt 7 Heat, NFS Most Wanted, Call of Duty Black Ops Zombies,Shadow Gun, Modern Combat 4: Zero Hour and the Unreal Engine 3 demo called Epic Citadel.  Benchmarks like GLBenchmark’s 2.7 Egypt HD and 3DMark Unlimited over on Anandtech support my experience.

It is true to say that the Ultra plays games like the current generation of consoles, the Xbox 360 and the PS3, in a very, very small form factor.  That’s impressive on one hand, but then again the newest consoles are coming out with around 10X the current capability that better supports geometry, anti-aliasing, physics, and lighting for more realistic gaming.

Another positive Ultra feature I must mention is the inclusion of a microSD card slot with support for cards up to 64GB.  If you get into games, you know just how much storage games require, like the ones I played. NFS Most Wanted take up (1.98 GB), Real Racing 3 (1.48 GB), GTA III (1.23GB), and Asphalt 7 (1.17GB).  With an extra 16-64GB microSD card, this gives you the space you would need to pack more of your games inside the Ultra.

My video experience was very similar to the gaming experience, which was quite good.  Compared to other phones, it was a nice experience to watch rented HD movies and HD TV shows, Netflix, Hulu+ and HD YouTube.

Another key driver of the video experience is the Qualcomm Snapdragon 800, specifically their embedded display processor.  Qualcomm’s multimedia engine will actually support 4X the resolution of the display, so 1080P isn’t a sweat.

In a video experience, audio is nearly as important as what you see on the screen.  While Qualcomm’s Hexagon DSP in the Snapdragon 800 supports DTS-HD and Dolby Digital audio, Sony doesn’t list what standard it supports.  Sony calls their audio solution Clear Audio+. Even without knowing what audio standard the Ultra did support, it sounded good.

Phablet of the Near Future

All of this hands-on phablet time got me thinking about the phablet of the near future.  What could Sony do to improve on the video and games experience given the phablet is made for media?

First thing is, they can take better advantage of the silicon that’s in the current phone. The Snapdragon 800 today is capable of 4K video capture and playback.  Sure, 4K video eats storage space like no tomorrow, but that’s what the microSD card is for. At a minimum, enable that external, cabled playback of that 4K video to an HDTV so that it can be the first mobile 4K playback device in the home.  Because the phablet now serves as a 4K digital media adapter, it makes a lot of sense to support the DTS-HD audio, too.

As for gaming, I’d expect next generation of phablets to get beyond console gaming as it relates to realism. Today’s consoles haven’t been the graphics pinnacle for years and phones need a new target, like the Xbox One and PS4, or even a mainstream gaming PC. It comes to no surprise that I’d expect at least a doubling in gaming graphics performance in the next turn of the phablet crank.

As for its display, I’m not necessarily convinced that the follow-on needs 4K, but some vendors will add it to their phablets as a differentiator.

As I said in the intro, although I have seen primary phablet research, I never quite understood why people bought phablets.  That all ended after I used the Sony Xperia Z Ultra phablet for a few weeks. While phablets have some negative baggage, on the positive side, they really are designed for media consumption, really shining with games and video. During the time I used the Ultra, I didn’t use any of my 7” tablets unless the Ultra was short on battery life.  This really put it all in perspective… phablets are literally a 2-in-1, primarily video and game consumption tablet, secondarily a phone.