Apple is one of those companies I affiliate with doing everything it can reasonably do to protect the environment. This is tough, as electronics use materials in components like batteries that, at the end of life, can end up in landfills that could be harmful to the environment.  Also, electronics use much energy in their production. I like that Apple asks the hard questions like “can we one day stop mining the earth altogether?”, however, it is more than talk.

More than any electronics company I am aware of, Apple designs and produces products and then goes out of their way at every product launch to point out the degree of eco-friendliness. Apple will also take back and recycle every product you buy from them and maybe even pay you for the trade-in. Two weeks ago, the company announced it is now globally powered by 100 percent renewable energy. Like I said, more than just talk.

What else could Apple do to take recycling to the next level? How about creating a second-generation disassembly robot called “Daisy” that can disassemble nine different kinds of iPhones, 200 per hour, and separate into logical buckets of recyclable materials and components?

Most recycling involves high-volume shredding where devices come in one end, are shredded and then separated by hand or by machine. This worked great in the 1970’s with old TVs with seven base materials, but it does not work well today, where three-quarters of the periodic table could be used in a product. Apple iPhones include rare earth magnets, alloys, tantalum capacitors, titanium screws, extremely high end and varying grades of pure aluminum, and of course semiconductors and bonded glass and displays. Daisy separates nine different iPhone models into logical parts that can be recycled today, recycled in the future, or disposed of as safely as reasonably possible.

Daisy, up close, personal and in Austin, TX
I got the chance to see Daisy in action as it literally consumed iPhones in one end and then handed back components for recycling on the other. I cannot tell you exactly where I saw Daisy in action, only that it was in a protected, factory in Austin, TX.  I have done many factory tours all over the planet, seen many assembly robots in action and even worked a few summers in an aluminum fabrication shop with robots, but I had never witnessed anything like Daisy.

As I was led to see Daisy, all I could hear was the combination of a giant “bam-bam” sound mixed with the hissing of gas. This fantastic robot was hidden behind a grey fencing, and I suddenly felt like I was in an Apple unveiling. Would you expect anything less from Apple, even though it was inside a factory?

Daisy is a self-contained unit with plexiglass windows and looked to be 30 long by 10 feet deep, staffed with three to four people. This is a third of the size of the previous robot, Liam. On one end, a worker was pulling old iPhones from a huge bin placing them into a funnel. Daisy is smart enough to determine the iPhone model and its degree of bend through vision recognition algorithms. Each iPhone has different characteristics which govern how Daisy disassembles the specific device and sorts the material, so determining which of the nine iPhones is important.  If Daisy senses more than a 10mm bend, it is rejected, and I was surprised that Daisy would accept a 5mm bend as it would make disassembly difficult. Daisy even accepts iPhones with the shattered display if there is enough rigidity left.  I’m certain, I saw my three kid’s shattered iPhones in the bin somewhere. OK, maybe not. 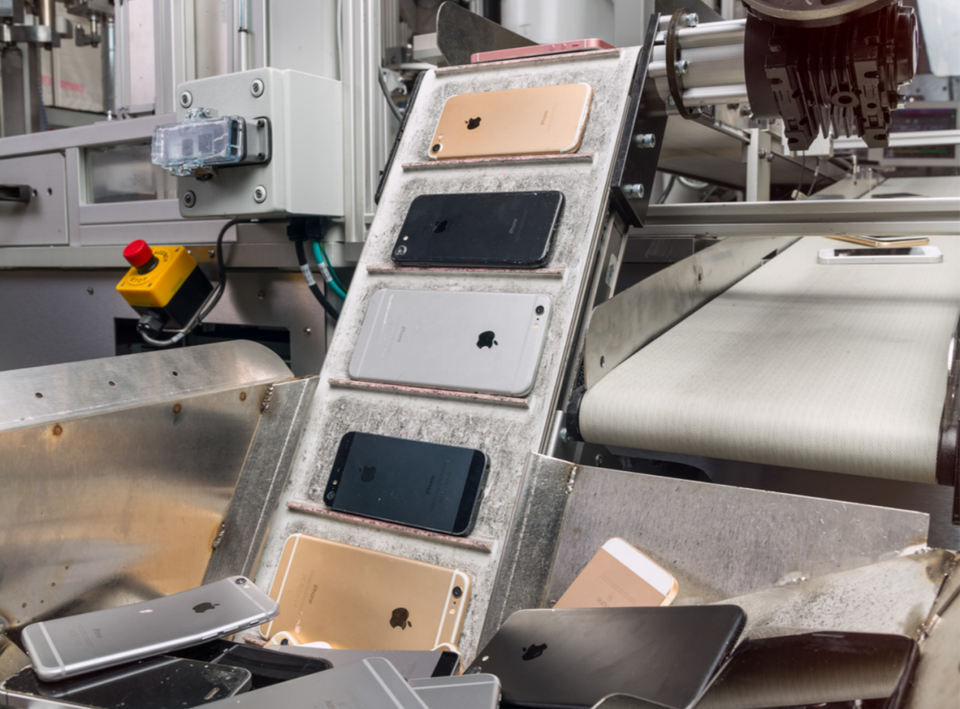 Next, Daisy takes off the display with what looked to me like an industrial skewer with four prongs. I think even iFixit would have been proud and I was impressed that it did it with such precision and speed. The display is then removed and placed in a bin. There is no known way yet to recycle a display, but Apple said it is looking for ways to do something other than disposing of them. After talking with Apple’s Lisa Jackson, vice president of Environment, Policy and Social Initiatives, I got the distinct sense that even because something wasn’t recyclable today, that may not be so in the future. Apple is working very hard to find novel ways to reuse components or even invent ways to recycle components that no one has figured out how to recycle. That is so “Apple” to me- figure out something meaningful that no one else has been able to crack (no pun intended) and fix that. 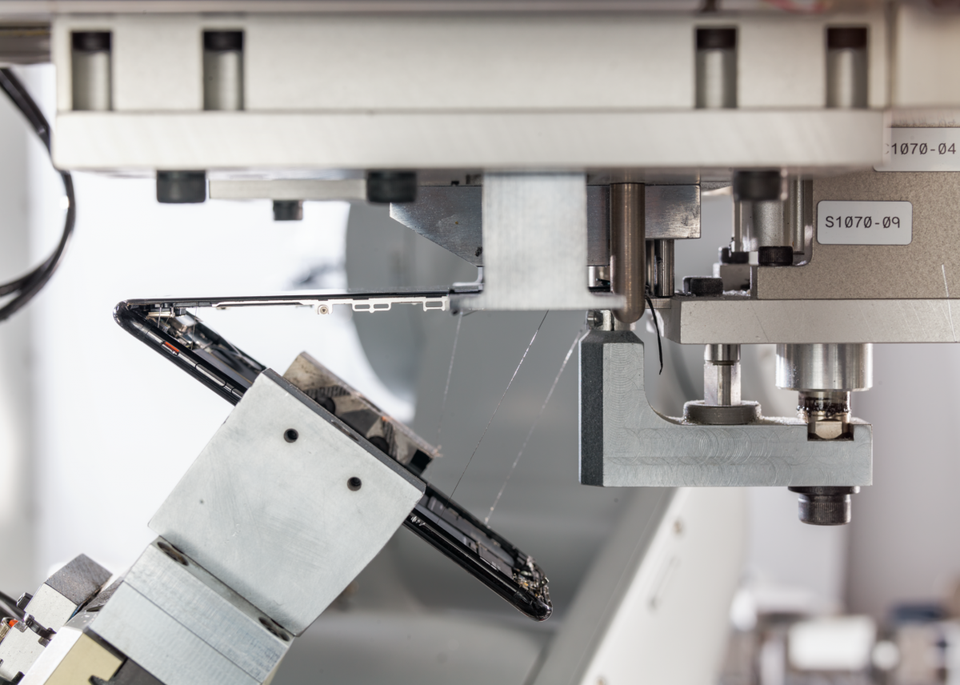 After removing the display, it makes removal of the earpiece assembly much easier, and with a gentle tap, it drops into a chute. The earpiece has a magnet with rare earth metals so, like the display, cannot yet be recycled, but as I said previously, Apple is looking for ways to change that.

Now it is time to remove the battery, but how do you do that if it is glued in place? Well, of course, blast it with -80c environmental air for a few seconds, freeze it and the adhesive keeping it in place, then literally, knock it out. Those “bam-bam” sounds I talked about as I walked into the facility? This was the battery removal process of the frozen batteries. Batteries are then scanned, bagged and inventoried for reuse or cobalt recycle. 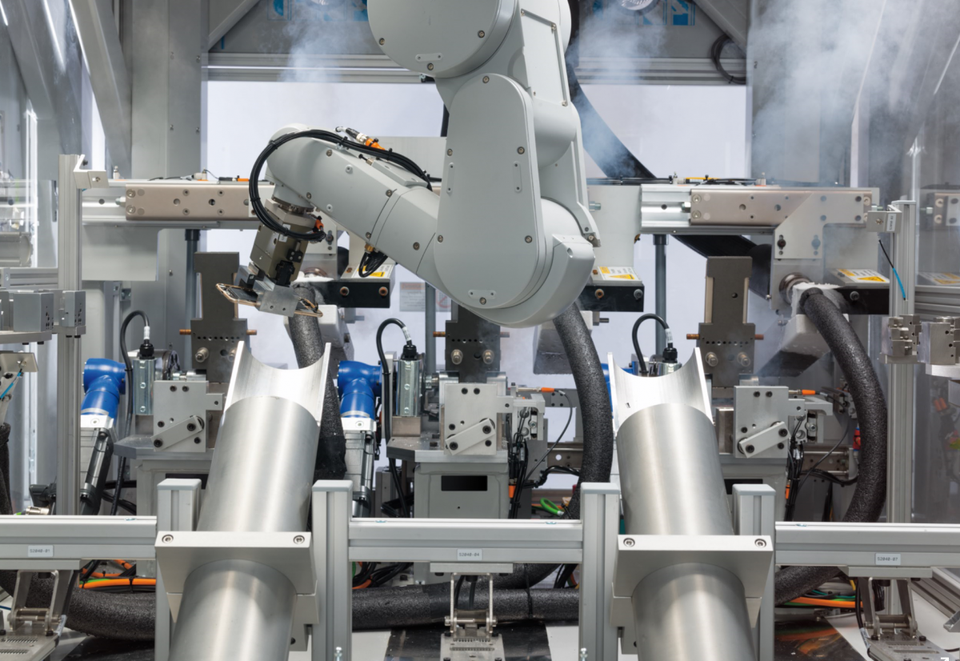 Daisy freezes the battery adhesive with a -80c blast of air

At this point in the process, you have the iPhone’s aluminum housing with one PCB (printed circuit board) with components attached with screws, sometimes titanium, which needs to be removed. Five robotic arms, two reused from the first-generation Liam robot, then punch out all the screws at an impressive rate of less than one second per screw. Remember, each phone is different with different screw placement, but Daisy knows this and remembers exactly where to punch. 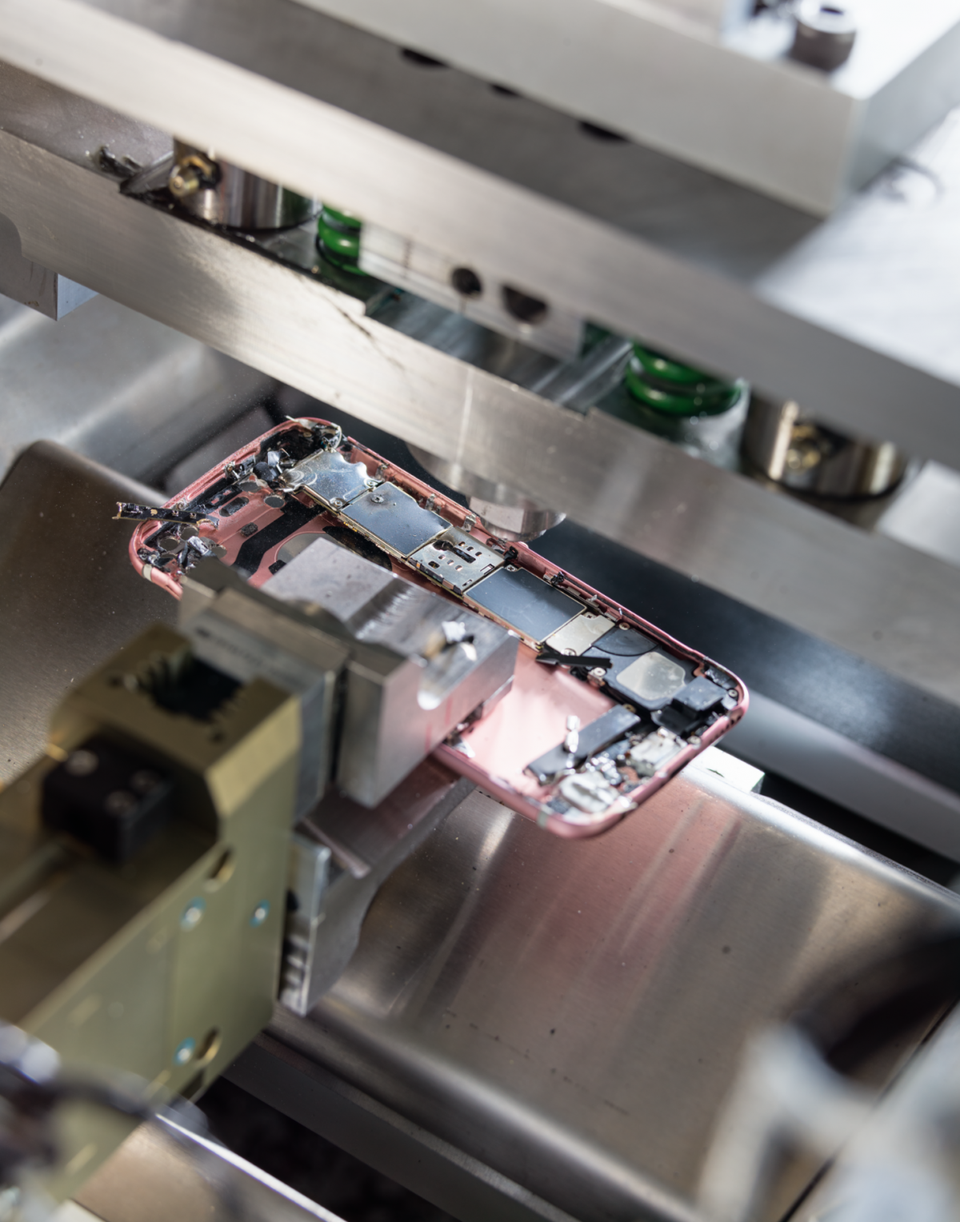 Daisy punching out screws at less than one second per screw

The phone then moves to the last robot, which turns the iPhone at a 90-degree angle and bores out all the PCB, camera, speaker, haptics, logo, and remaining PCB assemblies (SOC, memory, modem, and RF) with a single stroke and the components falls onto a conveyor. This really amazed me, and I figured this stroke would be different with every model and it would take multiple steps. To my surprise, an Apple engineer said the motion was the same as for these nine iPhone models; the assemblies were generally in the same place. Daisy then dropped the empty aluminum shell into a bin to be sorted. 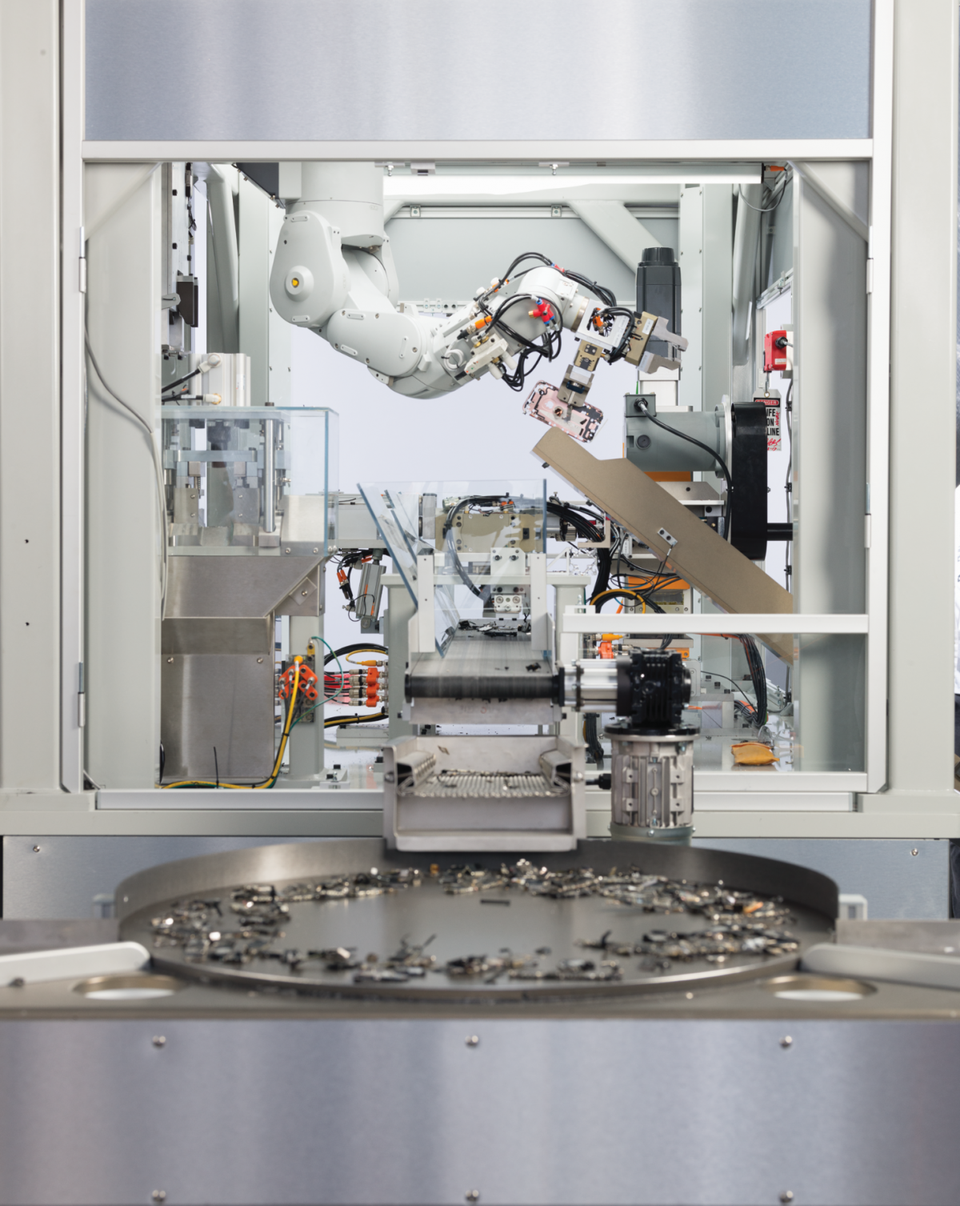 At the end of that process, one worker cleans up the aluminum shell, removing any remaining adhesive and sorts into three distinct metal types,  “6K” and two types of “7K”. Apparently, the aluminum quality is so good; it does not make sense just to jumble it all together to be melted along with an empty Sprite can.  Apple did not say this, but my distinct impression is that Apple someday will use that same aluminum in its future products. Wouldn’t a 50% recycled iPhone “R” Edition be cool? Again, my words and ruminations, not Apple’s.

Another worker then sorts the electronics that were scraped off the aluminum housing: speakers with their magnets, camera assembly with lots of copper, haptics with tungsten and rare earth metals, and the remaining electronics. My last look at the process was massive bins full of the separated components to be recycled today, repurposed and inventoried, or properly disposed of.

Daisy is currently deployed in Austin at the facility I visited, and according to Apple, another one is planned to be deployed to the Netherlands soon. Ms. Jackson said it would make sense to have a Daisy in each of Apple’s distribution centers, close to where older phones come in but didn’t commit to dates or specifics. This all makes sense, but I think Apple has more ambitious plans.

Apple makes over 200M iPhones per year and based on my back of the envelope math; you would need 125 Daisys working 23 hours a day, 350 days a year, to disassemble 200M iPhones. Ms. Jackson said she is quite open to licensing the technology to other entities and help set up operations and “doesn’t need to make a profit on it.”  Given Apple’s business model does not include licensing, I think this is a very big statement that shows just how serious Apple is about improving the art and science of recycling.

Some companies do “the environmental thing” to save their skins down the line- I have seen it for 30 years in my experiences crawling through factories and talking with executives. Sure, Apple has a lot to lose if tagged with the environmental scarlet letter, but I think Apple truly believes that protecting the environment is important. It is personal, and the company has raised the industry bar in the same way it has done it with the design and experiences of its products and services. Everyone I talked to on this Daisy journey takes this very personally, and not just Ms. Jackson and her team and Daisy- even Tim Cook gets on stage and takes very valuable announcement stage time to review what the company is doing. It is impressive for sure, and I am looking forward to the day that tens of millions of iPhones are being disassembled versus shredded. Maybe we will even see some iPhone components reused in new iPhones like Liam was in Daisy.  But starting today, via its GiveBack program, Apple customers can bring their Apple devices to an Apple store or via the web at Apple.com to be recycled or traded in, and for each Apple product received today through April 30, Apple will donate to Conservation International.