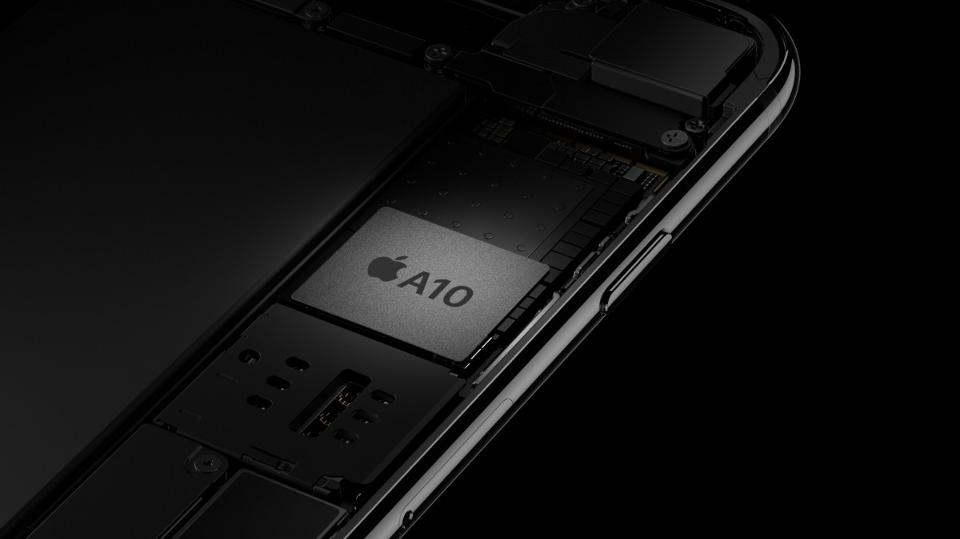 Apple is very well known for developing its own semiconductor IP when it finds it necessary to improve the experience or deem its suppliers to not meet its needs. This is why Apple has been developing its own custom ARM SoCs since day one while still licensing its GPU IP from Imagination Technologies. This includes its new A10 Fusion chip which features Apple’s first quad core processor design that has two different sized cores.

While details on the A10 Fusion are light, we do know that it is a 3.3-billion transistor chip that will likely be from TSMC and possibly Samsung. The A10 Fusion is Apple’s own design that features two high-performance cores and two low-power cores. If this sounds familiar, that is because you heard it from ARM Holdings a very long time ago (2012) with their big.LITTLE architecture. This isn’t a big.LITTLE design, this is more of Apple’s own take on that architecture with shared caches and a bridge “chip” to optimize for power and performance. Apple has stated that the A10 is 40% faster than the A9. The two high-efficiency cores in the A10 fusion are supposed to operate at 1/5 the power, which is designed to improve battery life—all of this while beefing up the GPU to be 50% faster than the A9 at 2/3 the power.

Apple’s modems have come from suppliers like Qualcomm in the past, but with the new iPhone 7 we are seeing that they are expanding to include Intel (who bought Infineon years ago). This expansion of modem suppliers means that a lot of the components inside of the phone start to change, and you can start seeing more Intel components and Intel partner components.

Ultimately, this is a bit of a loss for Qualcomm and a bit of a win for Intel, as Qualcomm will be shipping in fewer sockets while Intel will be gaining sockets they didn’t have before. The caveat here is that we don’t know what kind of pricing Intel is offering Apple to replace Qualcomm in some models. I suspect that Qualcomm’s revenues from Apple will be greater than Intel’s for the iPhone 7 and that while they may be hurt, there are some distinct disadvantages to the iPhone 7 being built this way. Users with AT&T and T-Mobile iPhones will not be able to move their phones to Verizon or Sprint or use them on certain Chinese and Japanese networks. This unfortunately means that some iPhones are no longer ‘World Phones’. Having different modem configurations and SKUs may also drive up Apple’s manufacturing costs from where they may have been with the iPhone 6S.

Apple also introduced a new SOC for the Apple Watch with the Series 2. From a design perspective, the Series 2 maintains the same simple look of the original Apple watch while significantly upgrading the internal components including the display and SoC. The new Apple Watch has an S2 dual core SoC with built-in GPS, which is claimed to have a 50% faster CPU and significantly faster GPU to enable apps to run at 60 FPS on the Apple Watch. I actually believe that this is a great improvement, and if you already like the Apple Watch this is a significant upgrade. However, I still believe that the square obviously nerdy looking design is what hurts the Apple watch sales the most, and if it looked more like a Moto 360 v2 they would probably sell significantly more. This hasn’t hurt Apple as much as you’d think though, they are the #1 smartwatch leader in revenue and #2 in revenue among all watch makers, second only to Rolex.

Additionally, Apple’s new W1 chip complements its A10 Fusion chip with a custom design to enable unique Apple wireless audio features. And since Apple has removed the headphone jack, there’s a big opportunity for wireless audio devices. Apple sees this opportunity and created the W1 to help elevate the wireless audio experience on the iPhone 7. This also presents an opportunity for Apple in that they could theoretically sell the W1 to their closest audio partners and make money from each headphone sold. Alternatively, Apple could use the W1 as a unique competitive advantage against the rest of the wireless 3rd-party headphone market and command a premium for their own 1st-party branded headphones through Apple or Beats.

This may also push the entire Bluetooth market forward in ways that nobody has foreseen before. In fact, I suspect that we will see a lot of vendors looking for Bluetooth modules and components that can deliver similar capabilities to what the W1 offers iPhone 7 users. This definitely looks more along the lines of Apple leading the industry into a certain direction and without a doubt explains why the company killed the headphone jack. By having wireless Bluetooth headphones with microphones connected, users can do more natural forms of communication with their devices like Siri and Google Voice and not hold a cable to their mouths as I have seen countless iPhone users do.

Apple is once again changing the semiconductor landscape, and it will be interesting to see how the rest of the market reacts. I believe that its introduction of the W1 may have a bigger impact down the road if Apple decides to sell it to 3rd-party vendors, which I still believe is unlikely but would be a great revenue opportunity. Once we start to see the new devices from Apple landing in consumers’ hands, then we can really start to get an idea of what Apple’s vision for the iPhone and connected devices really looks like.