There has been a lot of press and analyst hand wringing about Apple’s new flagship SOC for their new iPhones 5s, dubbed the “Apple A7”.  I participated in the speculative A7 run-up by answering various press questions on 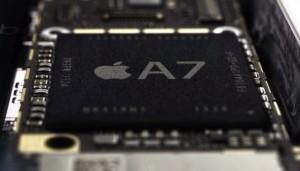 the A7, and the conversations invariably led to a discussion about 64-bits.  I answered the 64-bit question, but my contention was that there is a lot to like about the A7 in addition to the 64-bits, and that there were other things about the A7 that deliver value today. Based on benchmark numbers published last night by AnandTech, I was proven right. The Apple A7 is a benchmark beast, and Apple accomplished this through big improvements in their CPU, GPU, the addition of ARM v8 instructions, and Apple driver and software optimizations.  I’d like to provide my thoughts on the A7.

Before I jump into specifics, I want to reinforce that the best mobile SOCs are heterogeneous in that there are multiple “engines” that are used above and beyond the CPU and GPU and are fine-tuned to deliver the best battery life for a delivered experience. There are sensor engines like Apple’s own M7 or Qualcomm’s sensor hubs, fixed function blocks that decode and capture content like video and audio, ISP (image signal processors) for pictures and video, DSP’s like Qualcomm’s Hexagon for always-on operation, and even connectivity engines like LTE, WiFi and Bluetooth.  What I want to focus on here is the CPU and GPU of the A7 which had huge performance improvements.  Let’s start with the CPU.

It’s funny, in regards to CPUs, the mobile world seems to be engulfed in its own “core wars” that dominated the PC industry a few years back.  Over time, even the notebook PC vendors realized that two cores and maybe four cores were the right amount to optimize for.  It’s even harder to light up 4-8 cores of a phone versus a notebook because the software and accompanying workloads are less threaded.  To save battery life in mobile devices, most workloads are even paused when they’re not in focus.  Lots of cores are advantageous when doing lots of multitasking or playing very complex games, particularly true in the PC world.  Apple knows this and instead of adding a lot of small cores, they designed two, very powerful CPU cores.

When you consider the “snappiness” of a phone UI, it’s really dictated by the performance of the CPU in single threaded “integer” workloads and the GPU. Like Qualcomm, Apple has an architectural license from ARM, meaning they can literally design the entire CPU with their own IP instead licensing the design from ARM.  With an ARM architectural license, Apple can improve the CPUs in many ways: increasing the size or number of integer execution or floating point units, improving memory subsystem, adding cache memory, and many other ways.

The Apple A7 SOC also integrated ARM’s new architecture, called “v8” which includes the capability for 64-bit memory addressability.  There has been enough written on the benefits of 64-bits, so I won’t address this here.  What I will address are the benefits from the new v8 instructions.  Among others, v8 added cryptographics (for security) and improved SIMD (for multimedia) support which translates to better integer and floating point performance in addition to the architectural improvements.

The improvements Apple made to the A7 CPU paid off when you look at the figures in the AnandTech article.  The article cites, “integer performance is up 44% on average, while floating point performance is up by 67%.” Competitively, the Apple A7 faredwell against the competition on CPU benchmarks, too, many times beating out reference silicon platforms and even tablet platforms, an impressive feat.   The iPhone 5s even outperformed phones at the same price point by 2X, no small feat.  I would be remiss if I didn’t bring in Apple’s software capabilities as it relates to these benchmarks.  Browser benchmarks, as an example, use Safari to test and any improvements to the Safari code will be included in the benchmarks.  Apple can pull the hardware, software and application lever to improve performance and they did with the A7.

Let’s move onto graphics, or the GPU.

Apple has historically performed very well on mobile GPU performance benchmarks and the A7 followed that precedent.  Apple has typically worked very closely with Imagination Technologies and come first to market with Imagination’s latest graphics IP and designs.

Anand believes that the A7’s graphics are based on Imagination’s “Rogue” design, but Apple hasn’t released that information.  Whatever the subsystem or where the IP comes from, based on graphics benchmarks, the A7’s GPU performs really well, but it’s not as decisive as the CPU scores.  The A7 won many of the benchmarks, but the Qualcomm Adreno solution held its own.  I must point out that there were some anomalies that don’t yet make sense to me on A7 scores, like on GLBenchmark’s “triangle throughput” and “fragment lit” tests, but I am hoping this gets cleared up.

There are some unknowns about the A7 SOC that will help fill in the complete puzzle.  The first is always-on capability. Qualcomm’s platforms and the Moto X offer the capability to always listen, like an Xbox Kinect, and respond to spoken commands without pressing a button.  Driven by a low power DSP, Qualcomm’s Hexagon is always on but draws nearly no power.  Does the A7 offer this capability?  I can’t say “no” just because Apple hasn’t talked about the capability, but doing always on without a DSP like Hexagon would suck up a lot of battery power.

The other unknown is battery draw on the iPhone 5s, which has not yet been tested independently as thoroughly as I like to see. It’s one thing to drive performance, it’s another to do it and have good battery life.  I’m actually notconcerned about the A7’s power draw, because Apple has a very good track record in the correlation between claimed battery life and actual battery life. When Apple says it has 10 hours battery life on a workload, I believe them.

Typically when Apple introduces an “s” follow onto its flagship iPhone, minor improvements are made to the “guts” of the phone.  With the iPhone 5s, almost everything was improved inside the phone, except for the LTE and WiFi.  The improvements Apple made with the A7 are truly incredible, and they really went against the grain in their choices.  With an industry is obsessed with more cores, they went with fewer, larger and efficient cores.  With people expecting v8 and 64-bit ARM in late 2014, Apple brings it out in 2013 with full Xcode support and many performance optimizations.  With almost no sightings of Imagination’s Rogue graphics, Apple has it productized and optimized first.  With regards to die size, I say “who cares” that it may be 20+% larger than other mobile SOCs.  With Apple’s pricing power, it’s negligible and I’ve already addressed battery life.

Apple has done it again, but this time in unexpected fashion.