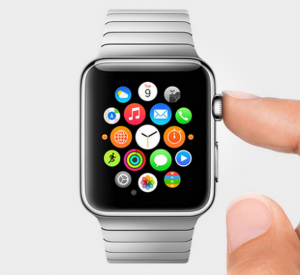 By now I think everyone interested in technology has dissected every word of Apple’s announcements last week of the iPhone 6 and iPhone 6 Plus, along with the Apple Watch.  As someone who is interested in home automation, I was rather disappointed by the fact that there were no announcements on HomeKit [though none were really expected], but let’s put that aside and focus on the eagerly (still) awaited Apple Watch.  Many are talking about the Apple Watch and its ability to be THE controller for Home Automation (HA).  I’m not yet convinced.  Given the little we really know about the watch, let’s take a look at how this may play out.

In earlier announcements regarding HomeKit, Apple stated they intend to connect to a wide array of home devices via HomeKit and the Made for iPhone certification program.  The focus is on the iPhone as a controller and Siri as a prime interface to home control.  At the Apple extravaganza CEO Tim Cook introduced the Apple Watch and outlined how it would be able to open doors, control lights and thermostats, and generally run your entire household.  Honeywell and Lutron, both lighting control companies were mentioned as partners. The new WatchKit will allow applications to provide notifications on both your handsets and watch.

From what we have heard, WatchKit provides two sets of features useful for home applications.  The first of these are Glances which let you see an action taken by an application on the phone via a quick look (or glance).  An example could be (my supposition only) that if you clicked on your Honeywell thermostat application, you could see the house temperature.  Or perhaps you could check your Lutron application and see if your outside lights were on.  Both of these examples give you a current status of information that could then be actionable from your watch.

Actionable notifications are sent from the iOS application on the user’s phone and allow you to do something, or take action.  This could be (again my supposition) your GPS noticing you arrived home and asking you if you want to unlock the door, and providing a button to do so.  In order for that button to show up, and for you to unlock the door the device application will have to be integrated with HomeKit and certified through the Apple Made for iPhone program.  Basically if Apple continues with what I believe is their current model, the Apple devices will be merely the controller for whatever home devices/applications are certified and integrated through these programs.

So what does the watch add to these home scenarios?  From what I can tell, it doesn’t seem to really add much other than add notifications to your wrist.  Maybe control my AppleTV (if I have one)? I’m sure there are those that will enjoy these options, but for me, if I have my iPhone or iPad with me I don’t see much value added.

Maybe the Apple Watch is not all that critical to Apple’s home automation plan, but that doesn’t mean it won’t be useful for developing interesting personal home scenarios.  If we look think a little deeper, we can assume that the Apple Watch will be able to use Bluetooth, Wi-Fi and sensors to do some pretty interesting things when it comes to your personal life in your home.  If it can sense when you arrive home (via either the GPS from your iPhone or perhaps connecting automatically as you near your house via BT or Wi-Fi) it could run a number of sequences to unlock doors, modify lights and temperatures, etc.  All of this will be written for the mandatory iPhone apps and not just the Watch.  I can also imagine sequences when I wake in the morning that would be interesting (start the coffee pot, turn on some lights, adjust the thermostat), but again, will the small Watch interface be even a fraction as useful as the highly interactive display on my phone? If the speech recognition is good enough, then that might make the Watch more useful as a home automation controller, but that can already be said for my phone, which is also always normally with me… my phone is with me because it has high utility and is less of a fashion accessory than watches in general.

For now, we are in a “wait and see” mode when it comes to the Apple Watch and home automation.  My own personal belief is the Watch be fun to play with, but will have little effect on the home automation market, at least for the foreseeable future.