As I have explained before, I’m an industry analyst, not a reviewer, but I do review important, new category products to better understand new usage models and the potential for category and/or vendor share shift. I had the chance to use the new Apple MacBook for the last week as my primary notebook and I want to share with you my experiences. I even had the chance to take on two trips. First and foremost, the new Apple MacBook challenged many of my preconceived notions of iPads with cases, 2-in-1s, and ultra-thin notebooks. I’m pleased to say that my experience with the new MacBook was, quite frankly, great, and I don’t throw that word around a lot.

Over course of the last year, there has been a lot of speculation on what kind of product category Apple would announce next after the iPad mini and the Apple Watch. Would they announce a larger iPad? Would they introduce some kind of 2-in-1 bridge product between an iPad with iOS and MacBook Air with OS X? Oh let’s not forget about that full-sized Apple TV. I’ll admit, I participated in a bit of that speculation and didn’t expect them to bring out the new MacBook.

The new MacBook pushes on conventional thinking by shrinking the notebook chassis, then attempting to make it super easy and intuitive to use. Apple tried their hardest to remove the downsides from going smaller, but how’d they do?

All things equal, whenever you try to shrink any electronic device, you typically have to remove features or capabilities. When shrinking a notebook, if you want to maintain battery life, you typically need to compromise on the experience delivered by the keyboard, trackpad, display resolution, processor performance and even rigidity. The laws of physics are the same for everyone, no matter how smart someone is.

For the keyboard, many times designers needed to shrink the keys, eliminate some keys, decrease key travel, and even eliminate backlit keys. On the trackpad, you may need to shrink it, or eliminate haptic feedback of the physical “click”. As it relates to processors, you would typically need to go with a low performing CPU and GPU that couldn’t get a lot done or just live with a noisy fan. Ironically, the smaller the fan, the louder the noise, and some designers as with the Surface Pro 3 were forced to add two fans to their designs to decrease noise.

Apple figured out a way to eliminate most, if not all compromises, in shrinking the MacBook form factor. The new MacBook is thin at no more than 13.1mm, thinner than my iPad Air plus a Belkin Ultimate keyboard. That’s also thinner than stacking two iPhone 6 Plus’s. The new MacBook light too, at around 2lbs. While weight for me isn’t as big an issue, it does help me determine whether to bring my iPad plus keyboard or the new MacBook. 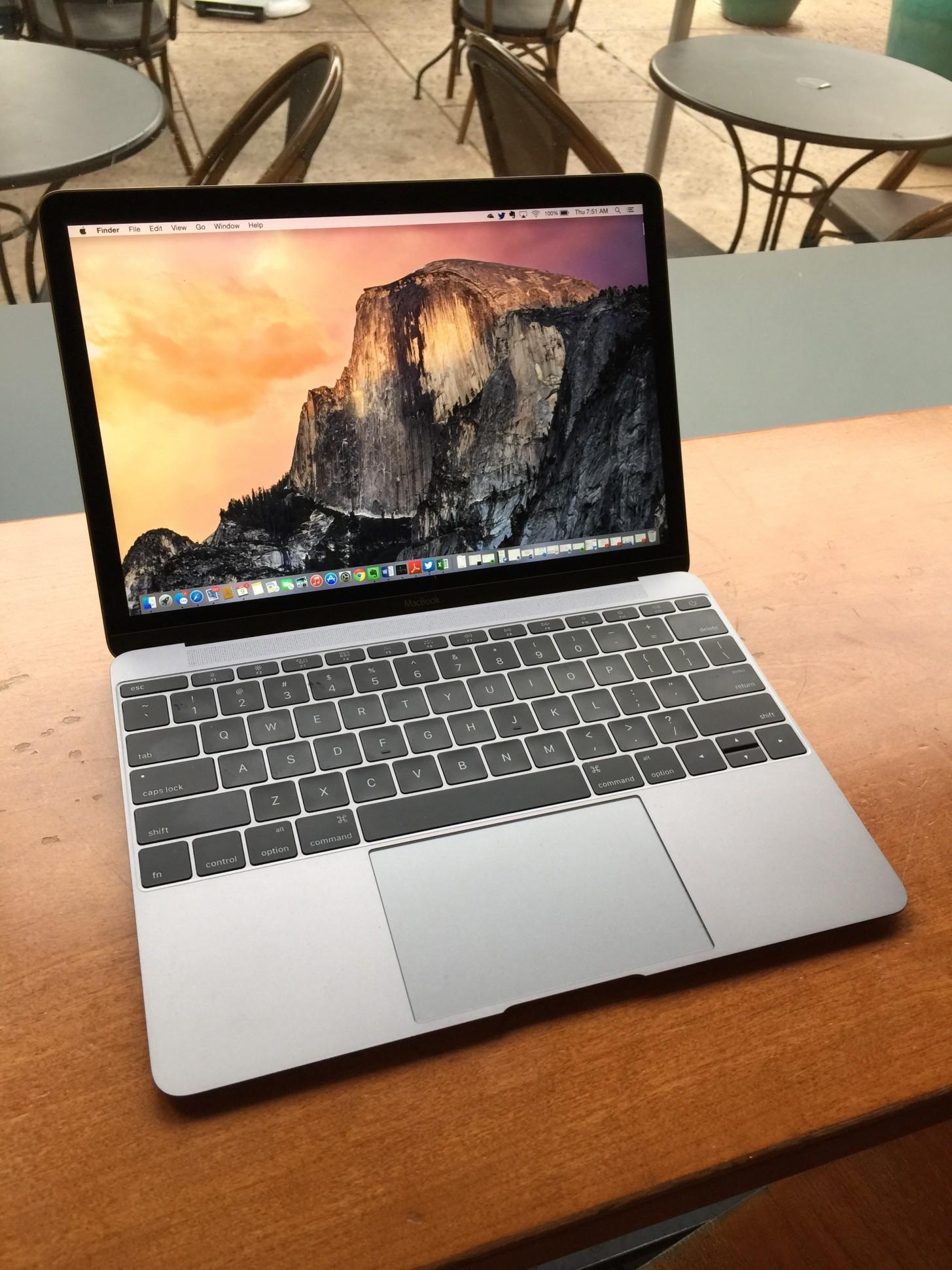 Many times, thin and light equates to flimsy. The MacBook is very rigid like a MacBook Air and uses the same machined aluminum all MacBooks use, giving me a feeling that the system was carefully designed with care. It’s very hard to accomplish small and rigid, but Apple did. You just know when you pick the MacBook up, it is a premium product.

I’ll say again… traditionally, there are vast trade-offs when miniaturizing something, but I noticed very few with the new MacBook. First of all, it has a 12” Retina Display designed into what could be considered an 11” chassis, and this is accomplished through having much less display “edge”. I really appreciated the Retina Display as I’m near-sighted and with the display so close to my eyes, things just look crystal clear, especially photos. The other thing to note is that all of the built-in Apple software was optimized for the 2,304 x 1,440 resolution, not true of other high-res display Windows notebooks. I have found on many high-res Windows notebooks where often the type varies dramatically between applications, either too small or too large and you just know the system wasn’t designed from the grounds up for high DPI use. I found the MacBook display bright enough to use outside on the porch, too, and still get things done.

I have to admit, when Apple spent so much time in their announcement gloating over the handiwork of the keyboard, my “marketing radar” went off. I really questioned why they had to spend so much time talking about it. I actually get it now. The keyboard is truly awesome. They keyboard is full size, the keys are HUGE, but don’t wobble back and forth, thanks to the new “butterfly-mechanism”. So why should you really care about this? It’s simple. I was just as productive on this keyboard as I am on a much larger keyboard, and that speaks volumes. 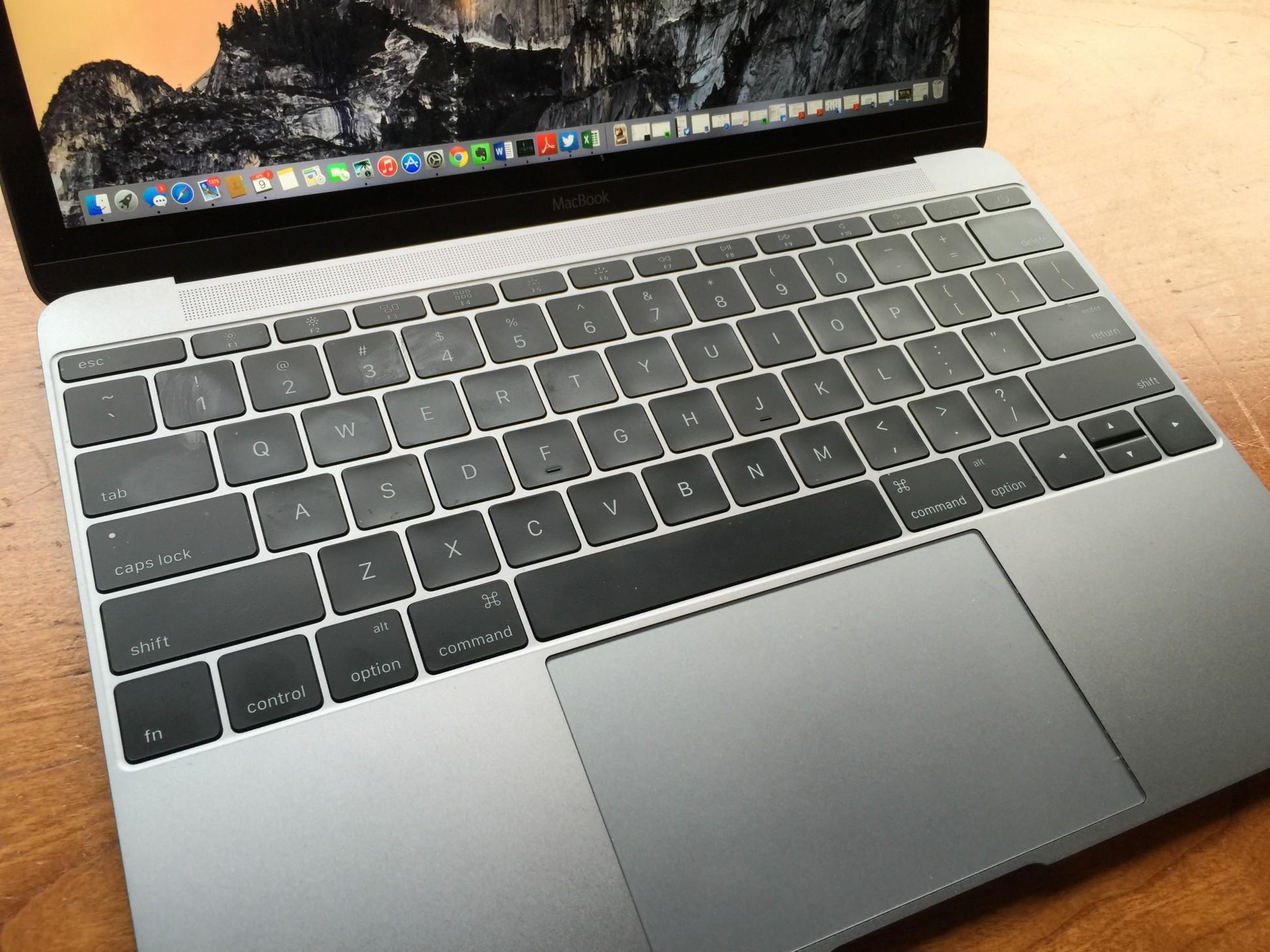 Look at the size of that keyboard and Force Touch trackpad! (Credit: Patrick Moorhead)

Like the keyboard, Apple spends a lot of time talking about their new Force Touch trackpad, and for good reason. Like I’ve said before, it’s very, very hard to remove even millimeters from a notebook, and at some point as a designer, you have to reduce the height of the trackpad. The challenge with that is that on all Apple MacBook trackpads, there is a physical hinge that operates up and down, and that takes room. The housing for that takes even more room.

Apple removed the hinge, widened the trackpad, and added the sensation that you are actually clicking on something. This is enabled by Apple’s Taptic Engine. Seriously, it’s so realistic that you really can’t believe you aren’t clicking on something. I tried hard to “break” the usage model and force a half click or mis-click, but I couldn’t trip it up. I was an avid Windows user for 20 years and I’ll be honest, I’ve had a hard time getting used to MacBook trackpads. This trackpad is just different and it worked great.

Apple also added a third dimension, depth, to the MacBook’s trackpad. This does take some practice as it’s not something we normally do, but after a few tries, I got the hang of it. What I really liked was that when you pressed harder, you got a second haptic “click” indicating that you were doing it right.

Many times, I forgot the Force Touch feature was there, but when I did use it, I was pretty pleased. I liked that I could get a definition of a word on a web page from the dictionary or from Wikipedia, immediately bring up a map inside a calendar, or access full contact information through email.

I didn’t run canned battery life benchmarks as they contain many flaws, but what I did do was measure how much battery life I got when I was actively using the MacBook. “Active” for me means display at half brightness, backlit keyboard low, bouncing between Mail, Safari, Messages, Twitter app, Calendar, MS Word Preview, and MS PowerPoint Preview. I did not count the time that the MacBook was in sleep mode. I am happy to say that I got 9-10 hours of battery life the two days that I tested battery life. This is exceptional when you factor in just how small it is and just how much I could do with it.

I couldn’t tell you how excited I was to see that Apple added USB-C to the new MacBook. There is one cable for the entire notebook for power and all wired I/O, including display, networking, and USB peripherals like storage devices. I’m a huge modularity fan, and think that we have just scratched the surface with interesting, extended use cases by segmenting different parts of the system. With USB-C, Apple is definitely fulfilling their promise of delivering a next generation notebook, as few peripherals exist today.

With the included USB-C to USB-3 adapter, I successfully connected two different gigabit Ethernet adapters and a three port USB-3 hub. I even successfully connected a large display via a USB-3 to HDMI adapter. When Apple officially releases their USB-C AV adapter, life will get easier, as it includes a power port, HDMI and USB-3 out. You do need to consider that if you do want or need cabled I/O, you will need to carry these small adapters, but of course, this is a trade-off for such a small unit. 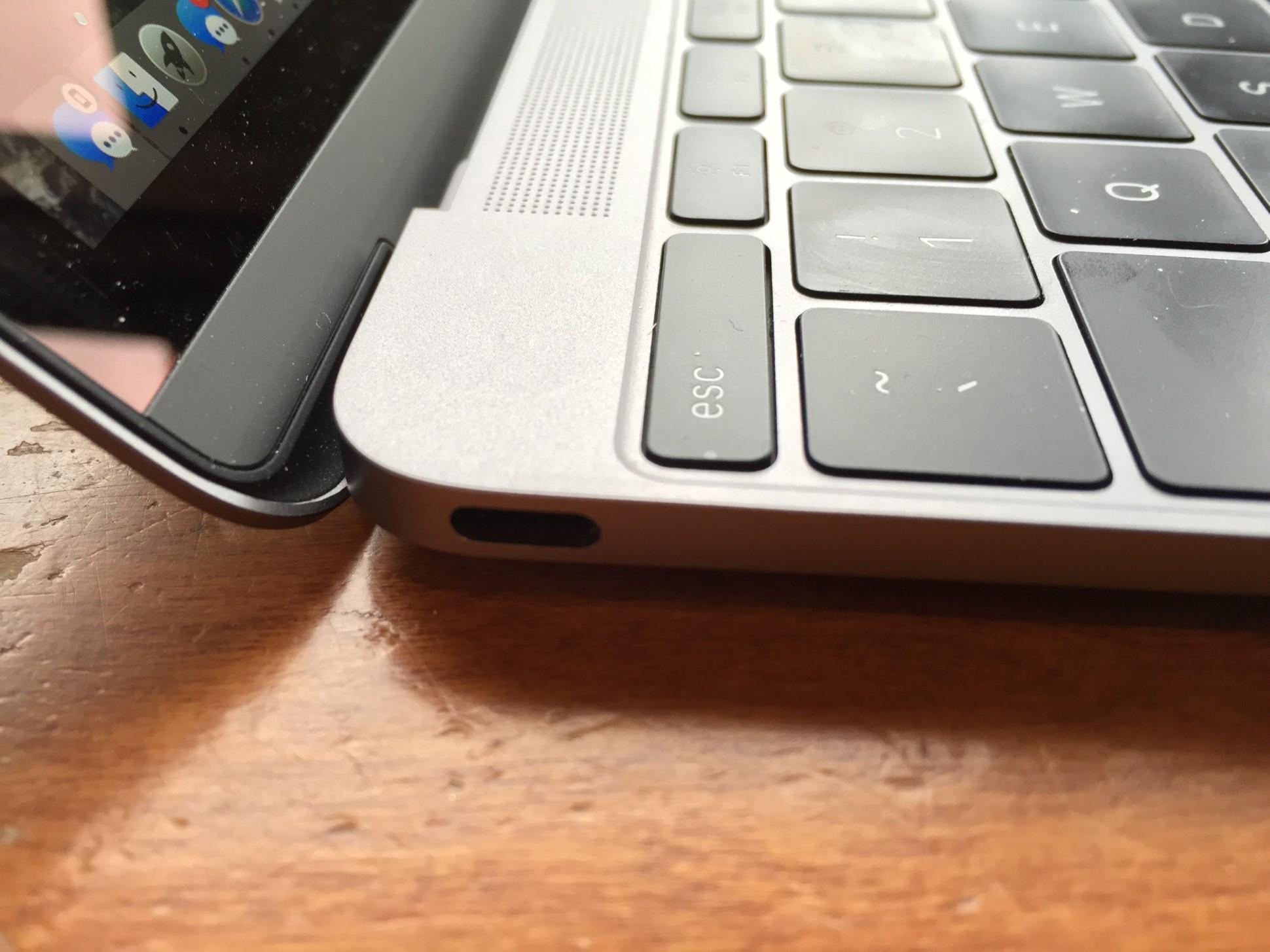 Did I need a second USB-C port? Personally, I did not, and when I get the new A/V adapter, I don’t foresee the need as it has what I need, including power. Most of my connectivity was wireless using Bluetooth for low-speed peripherals and Wi-Fi for higher-speed peripherals. I definitely used AirDrop and AirPlay more than I did before, and if you get a MacBook, I highly recommend using those features with your iPhones, iPads and other Macs.

I do wish that Apple had included WiGig and LTE options, but you can’t have everything. Apple has made their WiFi hotspot so easy to use that it may not matter to those with iPhones, but I would have liked to have seen LTE. You just can’t beat built-in LTE as I’ve seen it radically change my iPad use cases. As for WiGig and a wireless display, those use cases still need work to perfect and guarantee a high QoS, and the new MacBook is here today. I do expect Apple to add wireless display once the usage model is perfected. However, a thin, USB-C cable to an HDMI adapter is a huge improvement over a much thicker HDMI or DisplayPort cable plugged directly into a notebook.

I have written about and used many different Intel Core M-based systems. I have been very happy with most all of those systems, too, in basic productivity and entertainment usage scenarios. The Core M inside the new MacBook operates at only 5 watts, which enables a fanless design and gave me enough horsepower for the environments outlined above. The one thing different about the new MacBook versus other Core M-based systems is that I couldn’t get it to “hiccup” in the scenarios. By “hiccup” I mean pause every once in a while where you knew (or I thought) it was the Core M versus, let’s say, a higher performance Core i5. I don’t know for sure if I can attribute this to lower overhead for OS X, OS X’s driver model, or something else like the PCI-E storage, but I never felt like I was using a 5-watt processor. Heck, I have 4-5 watt peak processors in tablets and they never felt this smooth, including the iPad.

I went into this week-long MacBook review with some pre-conceived notions about what an ultra-thin notebook should be like and was pleasantly surprised that Apple destroyed most all of those notions. Apple’s design of the new MacBook’s full-sized and backlit keyboard, Force Touch trackpad and integration of a Retina display and an Intel Core M processor make the experience “feel” more like a much larger notebook. I think you’ll be surprised at just how many things you’ll be able to do with it versus larger devices and maybe even smaller devices like an iPad.

I am still a believer in 2-in-1s, so sure, I wish the new MacBook had touch and a swivel hinge on it, but in this case, I wouldn’t trade-off a few hours of battery life or a lot of thickness for the touch, either. OS X isn’t designed to be touch enabled and that would cause more headaches than it would be worth if it were.

I highly recommend the new MacBook for anyone looking for a premium experienced, premium priced, ultra-thin notebook experience who dislikes the downsides that come with most reduced form factor devices.