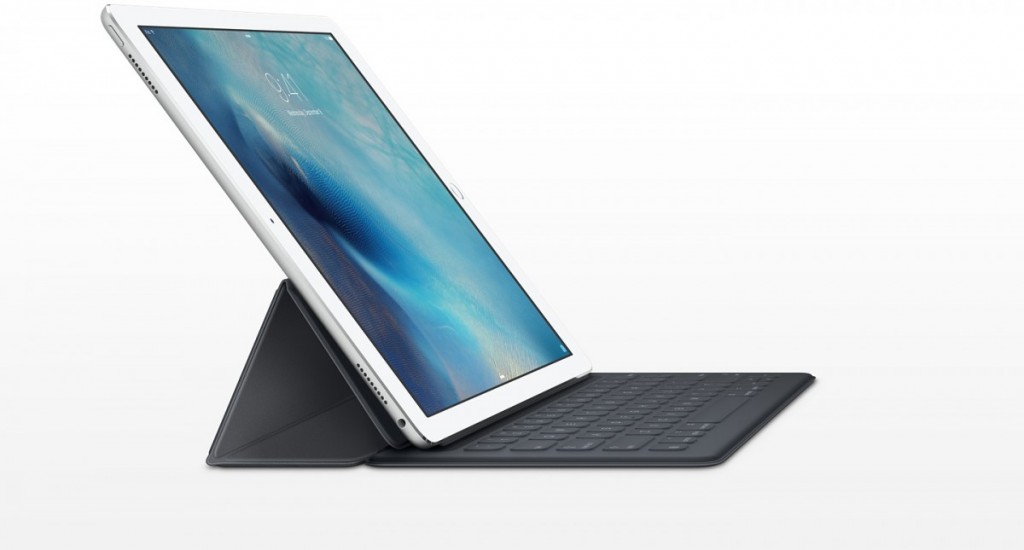 I spent over a week using the new Apple iPad Pro and want to share my experience, one that interestingly enough, changed my opinion on the device from launch day until now. With the iPad Pro, you really have to use it to truly experience it and understand it, but I’m hoping I can channel my time on it with you so you don’t have to. I will also provide my expectations on where I think the iPad Pro plays best today and could tomorrow in the marketplace.

My bottom line is that I feel the iPad Pro wasn’t designed as a PC or Mac replacement, but rather a more powerful extension of the utility of today’s iPad, which enables me to do more with than I ever could before. I came in with the expectation of determining if the iPad Pro could replace my PC or Mac, but left thinking it was in its own category.

Let me start with hardware design.

The iPad Pro feels like what you would expect with an iPhone or iPad with its brushed aluminum body, beveled edges, edge to edge glass and a physical home button with Touch ID. It’s as thin as an iPhone at 6.5mm and feels lighter than you would expect for a device with a 12.9” display. The iPad Pro weighs nearly the same as the original iPad at 1.57 pounds, which means that you can use it easily with two hands, but it could be a challenge with one hand for extended periods of time.

Unlike previous iPads, the iPad Pro has four speakers that have been channeled though the physical innards of its aluminum body, and my audio experience was really good, with a much deeper bass response than I’ve ever experienced on an Apple iOS product. I really appreciated the new speaker system while playing games and movies.  Apple could have added more battery or another hardware feature, but then again, this would have made it heavier.

The 12.9” Retina Display was gorgeous while watching videos, working with photos and videos, and playing games. It displays at 2,732 x 2,048 resolution equating to 5.6 million pixels in total. It would have been nice to playback those 4K videos from my iPhone 6s Plus, but I can appreciate that 4K touch displays suck an incredible amount of battery power. Apple is very disciplined with their 10 hour battery life approach on iOS devices.

So what does that mean for the experience? A lot. Consider that the iPad Pro can manipulate three 4K streams simultaneously with iMovie and recode them into one 4K stream with overlays.  Safari and even Mail operations felt faster, which I attribute increased CPU performance. I measured the A9X around a 30% CPU performance improvement over the A9, which again, bests the smartphone field today.

The iPad Pro also came with some very impressive wireless capabilities and I would say these are even more important to have with a mobile-centric device. The iPad Pro supports dual-antenna, 802.11ac Wi-Fi technology and MIMO (multiple-input multiple-output) technology for up to 866 Mbps.  This is fast, and the only thing Apple could have added would have been MU (multi-user)-MIMO and WiGig (WiFi AD) which I expect to see in many, many devices very soon. The iPad Pro also supports up to 150 Mbps LTE over 20 LTE bands meaning that true world-capability is essentially assured outside of some corner cases.

Some of the more impressive apps I used that demonstrated the performance and power of the iPad Pro and its A9X were UMake and Adobe Photoshop Fix and Mix. UMake essentially extends the capabilities of a 2D designer into a 3D World, making that translation into real models a whole lot quicker. Adobe Fix and Mix enabled a person like me, with very limited experience on these kinds of tools, to fix high definition photos and blend assets on the fly. You see, many times, the more automated and sophisticated titles take the most amount of system resources to make something easy. The very “novice me” had a lot of fun using Adobe’s Liquify and Healing capabilities inside Fix to make my photos more presentable. I had my teenage daughters cracking up as I was “fixing” my face. 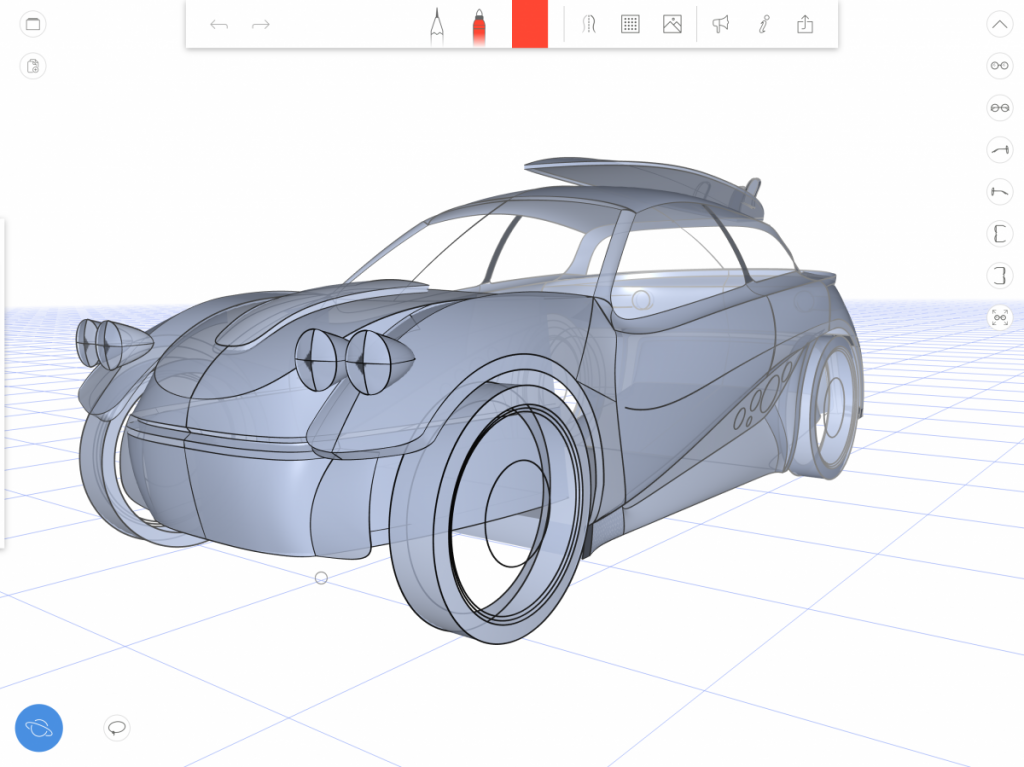 The iPad Pro is not a toy, it is the highest-performance machine in the iOS world by a long shot.

With a larger display comes the desire and capability to do more with the iPad Pro. Apple has enabled multitasking through “Split View”. The biggest improvement came with Mail and Calendar, where before the 12.9” Retina Display and multitasking, I was constantly double-clicking the home button to go back and forth. With Split View, I can have Mail and Calendar up at the same time. I also saw big multitasking benefits with Messages, Twitter , Evernote, Photos, and Contacts. 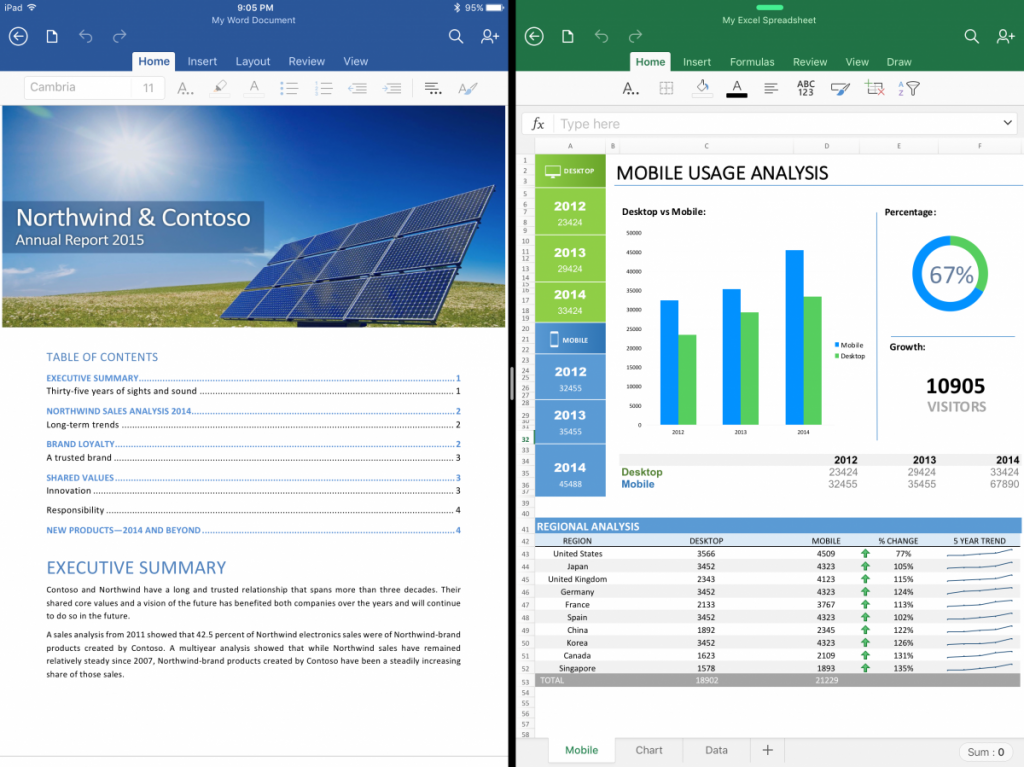 All programs don’t work yet with Split View; programs like FaceBook, ESPN ScoreCenter, and many travel, restaurant and home automation apps. Given Apple’s command of their ecosystem, I expect many if not most of these to support it in the future. Until then, users will have to know which apps support it and which ones don’t. This isn’t something you need to think about with a PC or a Mac.

I have been using an iPad with a keyboard case ever since the first iPad came out over five years ago. I blow through at least one to two keyboard cases every year, in part because they break or just stop working. I always wondered why Apple didn’t make a quality keyboard that was better integrated into their experience, and they finally did with Smart Keyboard.

I found the Smart Keyboard very easy to type on. The keys have good separation and travel. I want to point out that I’m quite comfortable typing on keyboards like this and don’t get hung up on key travel, etc., but I expect some could. Again, the iPad Pro wasn’t designed to replace the Mac or PC and this keyboard is by far the best I’ve used on a tablet.

The Smart Keyboard isn’t a drop-protective case, but enables quick connect and disconnect via Apple’s Smart Connector Technology that transfers power and data signals. This makes removal and addition of the case easy when you want to use it as a tablet and when you want to type up a storm, easily reconnect it. I found the response rate superior to all Bluetooth keyboards. I cannot tell you just how many times I need to first type a few letters before my Bluetooth keyboards will wake up. There’s no need to charge the Smart Keyboard, as its power supply is the iPad. Finally, I would have preferred a backlit keyboard, but if you need it, Logitech has one that is backlit.

As for the Apple Pencil, I have to admit, I have never been much of a pointer, pen or stylus user on any device, but recognize many users that are, and use it for their daily work and play-flow.  I have had many reasons for not using a stylus or a pen, primarily in that the surfaces I was writing on always felt too thick. There’s a reason that legal pads aren’t the thickness of phone books. I find that uncomfortable. Additionally, the pointer latency drove me crazy. I always felt the latency made the pen less accurate, which defeated the purpose of the pen in the first place.

Apple Pencil and the iPad Pro removed many of my barriers. I already said the iPad Pro was thin, which removed my “telephone book” thickness issue. As far as latency, I didn’t perceive any with Apple Pencil. Apple says that this was solved with a 240Hz pen refresh rate. One of the cooler features of the Pencil is that it detects just how much pressure is applied and at what angle you are approaching the writing surface. This capability nearly eliminated the need to choose different virtual pen tips for different thickness as all I needed to do was press harder for a bolder line or sideways for a thicker line….. just like a real pencil, marker, chalk or crayon.

I can see creative-types going crazy over Apple Pencil and maybe, just maybe make a convert out of me. Now I just need to figure out how to not lose Apple Pencil like I do all my other pens and pencils.

A little over a week with the iPad Pro wasn’t nearly enough time to bring out everything I know I will learn about the device, and the addition of the Smart Keyboard and Apple Pencil added to the myriad of possibilities. One thing is for certain… every time I tried to answer the “is it better than a PC or Mac”, I always swung back to “that’s not the point”.

If Apple were intending to replace PCs or a Mac, they would have made different decisions, like enabling all of your iCloud storage to be on the iPad…. or to enable every app to multitask regardless of the experience….. or to download all attachments in Mail. But Apple didn’t.

The point of the iPad Pro is to extend the capabilities of the iPad by adding a much larger and higher resolution display surface, multitasking, a much higher performance engine, and two new ways of inputting content with the Smart Keyboard and Pencil. It’s a new and more expanded experience, yet feels familiar. If you feel really comfortable using an iPhone or iPad, odds are you will be able to easily use the iPad Pro.

Given buyers don’t have an unlimited source of income or investments as a business, choices will have to be made. The first users I could see gravitating to the iPad Pro are those creative professionals or prosumers who already operate in the Apple software and hardware ecosystem. I can also see those vertical commercial plays like buildings, restaurants and retail outlets who already successfully use the iPad to gravitate toward the new capabilities the iPad Pro brings with it.  Consumers who love their iPads and just want to do more with it will be attracted, too.

The hardest case to think though is the working professional doing general office productivity. I think people comfortable with their current office productivity workflow are less likely to move from a PC or Mac to the iPad Pro in its current state, but I can’t help to think about many of those millennials who grew up with smartphones.  But then again, I’m not thinking IT will be too thrilled in supporting a second office productivity platform. I need to do a lot more research on this before I say anything conclusive on this topic.

I was impressed with my first week on the Apple iPad Pro and will be sure to provide updates as I experience and learn more. Let me know if you have questions below.