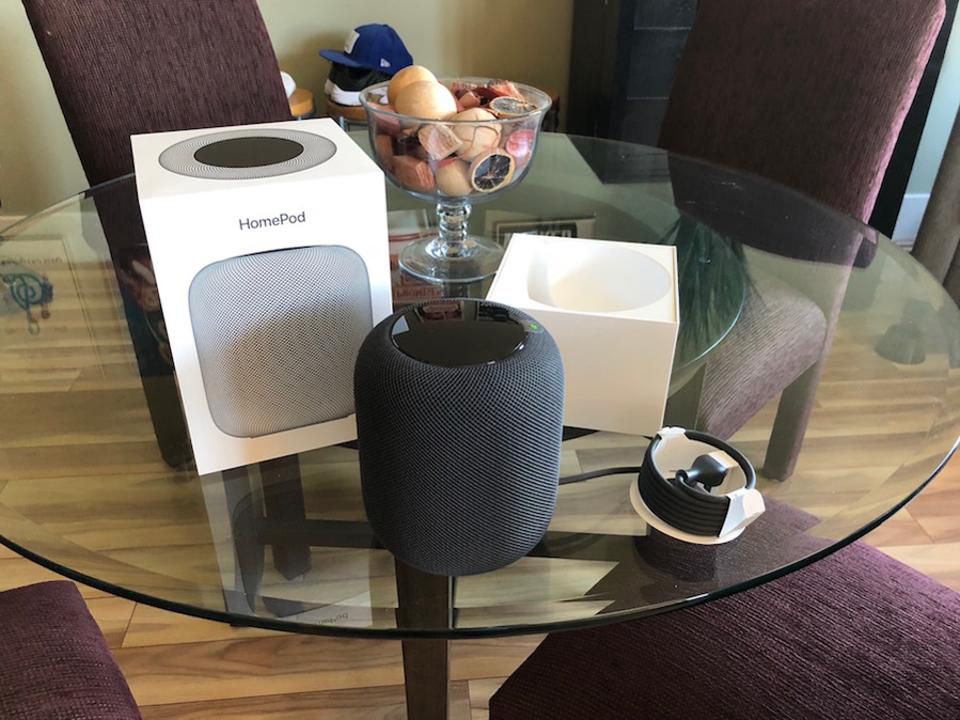 Let’s get this out of the way right off the bat— Apple ’s new HomePod is the highest fidelity “smart” speaker I’ve ever listened to. All the Super Bowl-like media hype (especially from Apple) over the past several months about HomePod’s audio excellence set a high bar that I doubted even Apple could meet. After hearing the HomePod in action, however, I have to admit that Apple delivered on that front. That being said, its Siri digital assistant capabilities are fairly feeble, an area where I had hoped Apple would have made significant improvements given the product’s delay. With this in mind, here’s my preliminary review of the device.

The new HomePod, available in white or “space gray” (Apple’s vernacular for black), is beautifully designed. It has some heft (weighing in at 5.5 pounds) and it’s wrapped in a high-quality mesh fabric that gives it a premium but home-friendly look right out of the box. Other than the two-prong electrical port, there are no other physical connections on the unit—HomePod’s connectivity is completely wireless (802.11ac with MIMO). It does have Bluetooth 5.0, but disappointingly you can’t connect the unit to other non-Apple devices as a pure Bluetooth-enabled speaker. It has a touch display at the top, but as it doesn’t display text or video content-it’s sole purpose is to notify you when the “Hey, Siri” activation phrase is comprehended. It glows white to tell the user that it’s ready for initial product setup and green during a phone call. There are “+” and “-“ buttons on the screen to adjust the volume but strangely there is no mute button. Apple engineers obviously expect customers to use voice control to mute the speaker, but it would have been handy to include a button. HomePod can be set up with an iPhone or iPad. Your home network sees HomePod as a standard AirPlay-like device that other Apple products can access. As with most Apple products, setup was effortless and characteristically issue-free.

Let’s spend some time talking about HomePod’s sound quality. Reportedly, Apple has been developing HomePod for nearly 7 years and the hard work has definitely paid off in this arena. As someone who was an original member of the Compaq Presario marketing team during the early 1990s (which introduced consumers to the notion of “multimedia” computing), I know more than a little bit about good audio. When you flashback to the early 1990s, consumer PC audio was in a very sorry state with expensive home sound systems “owning” the high-fidelity sound experience. That changed dramatically in the mid-to-late 1990s when companies like Harman Kardon, Bose and JBL started partnering with major PC brands, and invaded the consumer PC arena with significantly better sounding (and more affordable) speakers.

For years, my own admittedly simple (but effective) test for benchmarking audio has been the playing the overture from the original 1965 digital remastered version of the classic musical, Man of La Mancha. The score was originally performed with the orchestra separated into two groups of eight musicians on either side of the stage, to give theatergoers a stereophonic effect—a strategy that was hailed as revolutionary for musical theater at the time. In my testing, the HomePod blew away the Sonos PLAYBAR speaker (which has been the “go to” speaker in my home), and made the Amazon Alexa speaker in my kitchen sound like something I might have bought on sale years ago at Radio Shack. I was thrilled with the audio spatial separation during playback. To my left, I could distinctly hear the French horns, trumpets and trombones, and to the right, the castanets, tambourine and cymbals—exactly the way it was orchestrated. Absolutely remarkable for a single speaker, if you ask me.

In order to pull this off, the HomePod is packed with Apple’s A8 processor (which has been used the iPhone 6, 6 Plus, iPad Mini 4 and fourth generation Apple TV)—high tech horsepower not found in any other speaker on the planet. HomePod uses an Apple-designed upward-facing woofer that utilizes real-time software algorithms to improve bass management, permitting thoroughly clean and deep bass tones with minimal distortion.  HomePod also includes an internal low-frequency calibration microphone that assists in managing the bass system.  HomePod’s aforementioned woofer is a custom arrangement of seven tweeters, each one fortified with its own amplifier. This offers “beam-forming” functionality that creates exceedingly directional audio without compromising audio quality. Additionally, the “beam-forming” functionality and the device’s microphone give HomePod the ability to understand its placement in a room, the dimensions of the room, and any obstacles that could potentially degrade audio playback. This is very, very cool stuff. Side note: even when played at loud volumes, HomePod’s microphone capability easily responded to my “Hey, Siri” commands—something that my Amazon Alexa sometimes struggles with.

It’s important to know that HomePod doesn’t work with popular music services like Google Play, Pandora or Spotify—only Apple Music. And while HomePod is equipped with Bluetooth, you strangely can’t pair it with an Android or non-Apple device. You are forced to utilize Apple AirPlay to stream music from Macs, iPhones and iPads. This will be a major problem for those users who are not fully committed to Apple’s “walled” hardware garden.

Another major gripe I have with the HomePod’s audio is that when I use it as the main speaker, wirelessly connected to a MacBook or iMac, the audio is slightly out-of-sync when playing movies, music videos, or anything on YouTube. I suspect this is because the HomePod connects to Macs via AirPlay, which causes network-induced audio latency. Whatever the reason, it is incredibly annoying and makes it impossible to stream movies on Netflix or Hulu.

The most daunting challenge that Apple faces with marketing the HomePod is convincing customers that the audio is so superior to less expensive competitive offerings that it’s worth forking over $349. While I am confident that Apple will do a magnificent job showcasing HomePod’s audio capability at its Apple stores, it will be tough to pull this off in crowded retail stores that Apple doesn’t control. It will be difficult to discern how great sounding the HomePod truly is, over the ambient sound in a typical Best Buy on a Saturday afternoon.

I think I’ve established that the HomePod lives up to its hype from a sound quality standpoint, but unfortunately for Apple, I don’t think that will be enough for most consumers. We’ve been living in an Amazon Alexa-crowded world for the past few years, and Apple also has to compete functionally with the other digital assistants on the market.

Sadly, this is where HomePod breaks down. In some ways, using Siri on HomePod is even a less fulfilling experience than using it via an iPhone or iPad. Siri is still not in the same league as Alexa when it comes to understanding poorly crafted queries (which is the way most humans talk). But here’s what really bothers me—I had hoped that I could use HomePod as a speakerphone with my iPhone (something you can’t natively do with Amazon Alexa). Mysteriously, you can’t really do that with the HomePod either—you have to initiate the call with your iPhone and then select HomePod as your audio source, which is not very convenient if your iPhone is in a different room. Inexplicably, you can send texts with your voice, but it won’t alert you to incoming texts. To top it all off, you can’t use it to call an Uber-like you can with Amazon Alexa and Google Assistant devices.

While I’ve never used my Amazon Echo to buy anything (which doesn’t make me Jeff Bezos’s ideal user), I have used it to extensively manage automation tasks in my home—particularly controlling my lights and managing my Nest thermostat with Belkin’s popular Wemo interface devices. The good news is that I was able to use Siri via HomePod to connect to my HomeKit interface and manage my existing lights (plugged into Belkin’s Wemo Smart AC Plugs). Automating lights and other household functions using Alexa’s “skill” functionality is still a much easier path, but you have to believe Apple will continue to make improvements to HomeKit’s ease of use—I’m keeping my fingers crossed.

The final verdict
Given the limitations mentioned above, I really can’t encourage most consumers to run out and spend $349 for HomePod—even if you’re an enthusiastic Apple fanboy like myself. Yes, its audio quality is magnificent, but the sound quality is inherently subjective for most mainstream consumers. Moreover, its Siri implementation is half-baked and feels not ready for primetime. In all fairness to Apple, it has gone out of its way to encourage consumers and the media to focus on HomePod speaker capability, and Apple’s engineers will undoubtedly make dramatic improvements in HomePod’s Siri capabilities over the coming months so that its “smart assistant” potential is better realized.

Even so, HomePod is facing an uphill battle—Amazon has been actively licensing Alexa on more affordable third-party speakers that will offer “good enough” if not equivalent audio, with far better digital voice assistant capabilities. It might be completely unfair for me to say this, but I will anyways—I doubt Steve Jobs would have released HomePod, considering the poor state that Siri is in.