On Wednesday, Apple announced “the new iPad” to the excitement of the press and ecosystem partners.  There were many interesting themes and sub-themes that played out over the course of the event.  The most interesting theme I noticed was that of accentuating the visual experience with their Retina Display, game and photo editing demos.  While Apple has led many industry initiatives like the tablet revolution, they are clearly following NVIDIA’s vision laid nearly four years ago in 2008 and making questionable performance claims and appearing weaker in the process.

Apple spent considerable investment in the new iPad’s visual experience.  First, they doubled the resolution of the display from 1,024×768 to 2,048×1536, aka “2K”.  Technically, this quadruples the amount of information users can see on the screen inside new and optimized applications. This translates into a more lifelike and vivid experience.

Apple also released a new version of iPhoto to view, edit, manage and share photos.  I have always thought tablets were the best platform to do simple photo editing and enhancements and the new iPad iPhoto just placed an exclamation point on that for even more people. I do most of my photo editing on my iPad.

The most questionable item in the entire announcement was the focus on NVIDIA and their Tegra 3 mobile chip.  Apple typically 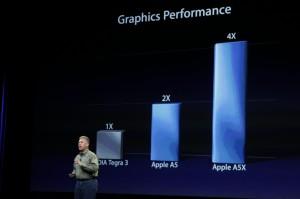 limits any direct competitor comparisons and only does when there’s a threat to them.  Apple said that their new A5X delivered “4x the graphics performance of the NVIDIA Tegra 3.” This is a big claim in itself even ignoring the fact that Apple didn’t provide any substantiation around the claim.

For 20 years I planned, built, and marketed technology products and I have never seen an unsubstantiated claim like this before.  I don’t believe Apple is lying about this, but I believe that Apple didn’t provide any substantiation because they wanted to focus the conversation on the product, not the technology. The problem is that their omission is raising an issue with many in the industry on Apple’s level of honesty and openness.  And it’s an issue they could have averted just by providing a small level of substantiation.

Experience Matters Most, not Performance Claims

Apple is well known for many things, particularly with their focus on the holistic user experience.  I choose the iPhone and iPad right today because it delivers an experience that I currently prefer.  This is why it was so surprising that Apple felt it needed to make graphics performance claims.  I believe that when the benchmarks are performed in a few weeks, there will be a few numbers in a sea of numbers that show a 4X advantage, but not many.  There will also be numbers that show no advantage or even losing, too.

What everyone needs to realize is that these benchmarks are what are referred to as “synthetic”. That is, they aren’t real games or applications; they are routines that attempt to simulate the applications.  NVIDIA and AMD, the leaders in PC graphics and gaming hardware, understand this and so do the gaming publications and ISV’s.  Those “in the know” mock most of the synthetic benchmarks as what the rookies use.  The more professional PC gaming publications actually run real games with scripts to compare performance.  (Note: One exception to the synthetic rule are some benchmarks published by Futuremark.)

Apple didn’t need to make comparative claims to prove a point and as a result has put more a focus on what Apple might be trying to obfuscate. This was a tactical error.  So what about the vision of delivering a better visual experience? It’s a good one, but was already led by NVIDIA nearly four years ago.

Apple leaned into the visual experience of the new iPad, which would have been more significant if NVIDIA hadn’t described it nearly four years beforehand.

NVIDIA launched the Tegra platform back in June of 2008 and explained it like this in their press release: “NVIDIA Tegra is a tiny computer-on-a-chip, smaller than a US dime (10-cent piece), designed from the ground up to enable the “visual PC experience” on a new generation of mobile computing devices while consuming the smallest amount of power.”

Apple described the iPad like this:  “iPad is our most advanced technology in a magical and revolutionary device at an unbelievable price,” said Steve Jobs, Apple’s CEO. “iPad creates and defines an entirely new category of devices that will connect users with their apps and content in a much more intimate, intuitive and fun way than ever before.” Apple’s approach was focused on ease of use with broad content at a good price.

What this Means for Apple, NVIDIA, Qualcomm and TI

Apple is smart and realized how powerful Tegra’s 2008 vision was and now want to own it as their own.  Visual experiences are differentiating and also demonstrable to consumers at retail and on TV, a powerful combination.  It’s clear to me that Apple was threatened by NVIDIA and what they can bring to the iPad competitors.  If Apple didn’t feel threatened, they wouldn’t have needed to do a direct, unsubstantiated comparison to Tegra 3 graphics, and comparison with what I believe will be synthetic, non-game benchmarks.  An accurate comparison would be the comparing same game at the same resolution with the same quality features turned on measuring frames per second.  This truly shows game experience comparisons versus synthetic benchmarks.

This is a game experience test I don’t believe Apple wants to highlight because it plays right into NVIDIA’s strengths, which is graphics hardware, game developer relations and driver development.  Apple is smart and knows that they can’t win long term on this competitive plane.  Many larger companies like Intel have tried to compete head to head with much smaller teams at NVIDIA and AMD on game graphics optimizations and haven’t fared well.  Intel has been trying for a decade and hasn’t yet caught up and just because Apple is the most powerful tech company today, I don’t think they can do it either.

NVIDIA should be thanking Apple today for the direct Tegra 3 comparison.  Not only has it provided the impetus for the tech press to drill into the comparison further, it provides NVIDIA a great platform strategically and tactically.  Strategically, NVIDIA can rightfully claim their long term mobile vision was spot on and was there before Apple, who is viewed as the most visionary company.  Tactically, NVIDIA now has everyone’s attention to listen even more closely to Tegra 3 and future Tegra messages on the visual experience.  Android and future Windows 8 tablet makers will now be increasingly pursuing NVIDIA for an answer to the new iPad. NeitherQualcomm nor Texas Instruments have shown they are the ones to call to fight a visual experience battle with Apple.  All of this fares well for NVIDIA and makes Apple look weak in the process.

This is an exciting new battle that Apple didn’t have to initiate, but did. Apple rarely does something unintentionally, which indicates a potential short term or long term threat to their aspirations.  Time will tell if it was brilliant or a strategic mistake.