Last week, I attended AMD’s annual Financial Analyst Day at their Corporate Headquarters in Sunnyvale.  They outlined their future corporate and product strategies as well as rolling out their new senior management team. 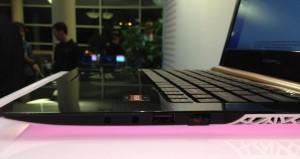 One thing they discussed in more detail than others was “Trinity”, which they have positioned as their solution for ultrathin notebooks.  AMD is placing them to compete directly with Intel’s Ultrabook initiative, which I outlined a few weeks back. Specifically, Trinity will be fighting Ivy Bridge from Intel, a 22nm “shrink” with a new graphics subsystem, the Intel HD 4000.  While competition is welcomed by all of the OEMs and ODMs in the notebook ecosystem, AMD’s Trinity is in no way a risk-free endeavor.

AMD discussed in detail their progress and future plans to develop software for their Fusion-based platforms. Basically, AMD is enabling a new OpenCL-based ecosystem to leverage the parallel-processing units in their APUs.  AMD hopes it can enable enough OpenCL-based applications to counteract any advantage Intel has with their general purpose, Ivy Bridge processors.  The right HSA software coded for the right usage models could be a game-changer for AMD.  For the consumer market, AMD must enable new applications or new usage models that are relevant, demonstrable, and unique.

This is very risky for AMD because it requires enablement of a new ecosystem which is very expensive and takes a lot of time.  This would be challenging for any company and not unique to AMD.  Venture capitalists are funding thin client apps and cloud apps, not very many PC apps.  If AMD cannot enable the right kinds of applications, they will be pushed down into lower price points than Intel because they won’t be able to compensate for Intel’s general purpose computing advantage.

When Intel introduced their Ultrabook initiative, they also announced a $300M fund to invest in designs, technologies and marketing.  The fund was designed to accelerate the normal course of investment of the new initiative.  One thing the fund paid for were thin and light designs as well as thermal solutions to enable high-performance Intel Core processors to fit into such small designs.

AMD must fund enough mechanical designs to drive their targeted ultrathin business.  If Intel has co-funded the designs or owns the thermal designs, this will be a challenge for AMD as they will need to develop their own.  AMD said they have even more design wins on Trinity than they did on Llano which is a positive sign, but we will all have to wait to see what launches.

Intel and AMD provide co-marketing funds to ODMs, OEMs, and the retail channel.  This pays for many things including advertising and retail “shelving” and items like retail end-caps.  It’s easy to spot; any time you see an advertisement by an OEM and it calls out Intel or AMD, odds are the CPU manufacturers paid for some of it.  Intel has been very open that they will also be running direct advertisements to drive awareness and familiarity for Ultrabooks.

In a world where AMD wants to lower S,G&A (sales, general and administrative) expense and invest in new R&D or improve profitability, will they be able to invest enough in marketing to effectively combat Intel’s Ultrabook?    In one way, Intel’s spend helps create the market for AMD ultrathins, but if Intel creates preference specifically for “Ultrabooks” it could be problematic for AMD.  AMD must market its potential advantages or they might as well not even exist.  Either AMD will spend enough on ultrathin marketing or they will need to take it in prices which lower their potential gross margins.  It’s as simple as that; there are no free lunches.

Intel is the market share leader in PC graphics but it isn’t due to their graphics prowess.  In fact, it is common knowledge in the PC ecosystem that Intel is behind AMD and NVIDIA in graphics capability due to software.  This is particularly true in the consumer market where game compatibility and game performance is an important metric.  On Ivy Bridge, Intel will deliver DX-11 class graphics, which on paper, will be the same Microsoftclassification as AMD has with Trinity.

While AMD has distinguished itself in the consumer market for years with their graphics and video, does this guarantee an advantage it indefinitely in the future?  I like to think in terms of “probable” or “possible”.  It is “probable” that AMD’s Trinity will provide better graphics than the Intel HD 4000 graphics, but it is “possible” that Intel’s will be good enough.  Add that to the marketing spend delta and Intel could negate any potential advantage.

As I outlined in my last Ultrabook analysis, Intel is enabling two security features, Intel Anti-Theft (AT) and Intel Identity Protection (IP). Intel AT is exactly what is says, to protect your laptop and its content from thieves.  One valuable Intel IP feature allows consumers a quick and safe way to buy and transact on specific web sites.  This Ultrabook feature has gotten the least amount of traction of all the features, but what if it does?  IfIntel AT and IP do gain traction, AMD will need an answer which it hasn’t discussed.

Last week, AMD talked about the possibility of ultrathins starting at $599 (“$600”).  Today at Best Buy, the least expensive, non-promotional Core i5 Ultrabook is priced at $899. To hit $599, AMD, ODMs, and OEMs would need to enable a $300 price reduction less retailer and OEM margin.  As AMD CEO Rory read pointed out last week, the two most expensive components are the CPU and the OS (Windows 7).  AMD cannot enable all of the price decrease and I don’t expect Microsoft to enable anything.  This means ODMs and OEMs must enable cost reductions other ways.

I expect to see many AMD Trinity-based ultrathins with cost reducing designs with plastic chassis, hybrid drives, and non-backlit keyboards.  Because AMD hasn’t described a low mark for battery life, I must assume they have left battery life guidelines up to the OEMs.  Therefore, I would expect a few designs to sneak out with low battery life. All of these could lead to a cheap perception with AMD’s ultrathins.

AMD’s Trinity will enable much lower price points than Intel’s Ultrabook but could also limit AMD’s potential upside into higher margin, higher-priced expensive ultrathins. If the ecosystem correlates AMD with “cheap”, it’s hard to move up.

Any real downside to AMD’s Trinity?

I’ve outlined the potential risks AMD faces to battle Intel’s Ivy Bridge Ultrabook head-to-head.  They will need to mitigate these risks to reach into that $250-300 (Intel public list) APU price point.  If AMD’s goals are to occupy a lower price point below Ivy Bridge and cede the high end and maybe even mid-range, then mitigating these risks aren’t as important.

Llano didn’t go as AMD planned and they took tremendous risks as they changed design and manufacturing process at the same time.  AMD’s only manufacturing risk is a new BGA package but maintains a 32nm Global Foundries process.  Net-net, if AMD can ship on time and “execute, execute, and execute” as AMD’s new CEO Rory Read is pounding into every employee’s head, they will be far ahead of where they were with Llano.