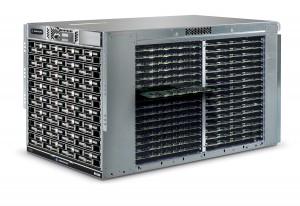 centers built at frighteningly large scale, but don’t scale down to small installations very well.  AMD SeaMicro’s chassis was designed as a disaggregated server and it provides disaggregation benefits for small server deployments, down to 10 rack unit (10U) increments, as well as giant hyperscale datacenters.  Given that the OCP disaggregated server concept is not even in the market yet, AMD deserves respect for their forward thinking.  I’ll do an overview of this here and if you want a much deeper dive, you can download our white paper (free) here.

There was a lot of talk about disaggregating server architecture at the rack level at OCP Summit.  Most of the assumptions discussion centered around operational economics at Facebook FB -0.52% – volume pricing, serviceability, configurability, and the ability to decouple component refresh cycles from each other.

Enterprise servers, the kind server that dominates IT department purchasing today, have dedicated storage and data center network access on each motherboard.

Decoupling refresh cycles lets data center customers purchase server compute nodes, which are essentially very small motherboards (processor, system memory, boot environment, management, and connection to a local network fabric), separately from rack-level data center network interfaces (1GbE and 10GbE), separately from mass storage (hard disks and solid-state drives).  Facebook already gets volume pricing, but standard motherboards have networking built onto them as well as a host of other features and connectors that are not used in common hyperscale deployments.  Disaggregating rack level server architecture will enable Facebook to replace individual components at large scale, either when the break or when they become obsolete, lowering costs even more…at least in theory.

The AMD SeaMicro Freedom Fabric design separates processors, storage, and data center network access from each other within their 10U chassis, so that each component can be replaced and updated on different schedules.  It’s modular and flexible and that helps drive costs down.  Customers can buy the right processor cards for their workloads, and then balance the processor cards with the right amount of storage and network bandwidth to tune their AMD SeaMicro hardware for a specific workload.

The core of SeaMicro’s Freedom Fabric system architecture is a network fabric in the shape of a 3D torus.  Picture a donut – the surface of the donut is a 2D torus.  If you ran a network around the outside edge of the donut until it wraps back around, that’s one dimension.  Run another network from the outside edge through the hole and back around, like you were taking a bite out of it, and that’s another dimension.  SeaMicro’s third dimension for the network fabric is harder to visualize, but the result is that the three dimensions together provide a processor-to-processor communications fabric that has a short number of “hops” between any two processors and to built-in data center network adaptors, a local storage array, and SeaMicro’s storage fabric extender (access to even more storage for Big Data workloads, over five petabytes).

What AMD SeaMicro is good at that many other hyperscale system designs don’t really address, like the OCP’s disaggregated rack-level architecture, is that AMD SeaMicro can scale from a single 10U chassis to racks, then to rows of racks, and into hyperscale.  OCP’s disaggregated concepts are designed to tackle huge scale first, which is useful for customers building huge data centers.  Those OCP concept architectures incorporate technologies and design elements that are too complex and perhaps too expensive at smaller scale.

I have published a detailed and free white paper here if you would like to know more.