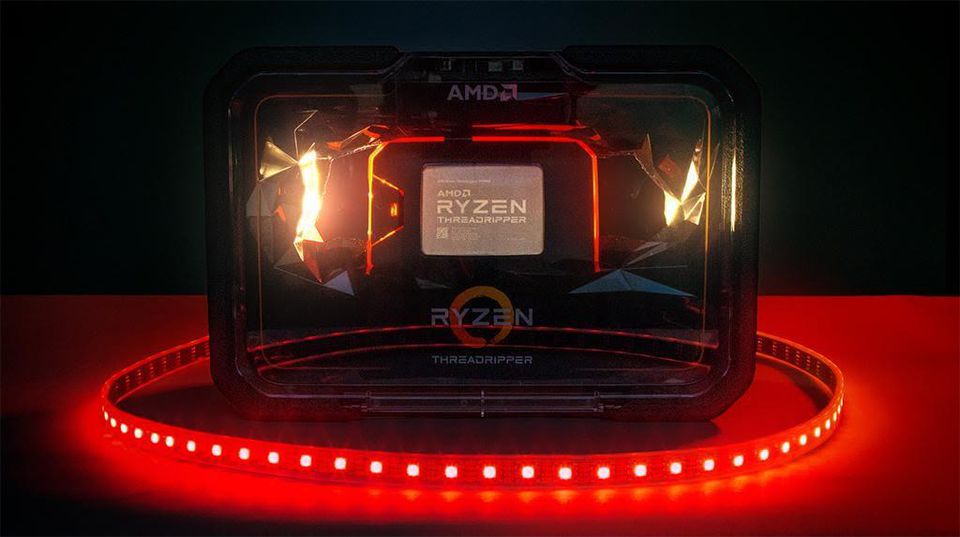 With the 2nd generation of Ryzen Threadripper, AMD decided to introduce a series of new chips that add new 24 and 32-core variants in addition to the already existing 12 and 16-Core variants. It decided that based on the previous Ryzen Threadripper launch it made the most sense to launch the most popular chips first, which are the 32 and 16-Core variants (2990X and 2950X, respectively). That makes sense to lead with your best foot first and get the headlines.  A multitude of reviews have come out evaluating these two chips, that come to a set of conclusions that I would like to analyze and add to with my own experiences and thoughts.

The first and immediate thing that reviewers observed was that what AMD offers on paper is value. When you look at the 16-Core Threadripper 2950X, probably AMD’s highest volume Threadripper part (based on 1950X numbers) you can see from multiple reviews that it does particularly well in many workloads. The 2950X does especially well because AMD is introducing it at a lower price point than the 1950X when it launched and at a higher performance level.

Tom’s Hardware’s says it best in its review, “Threadripper 2950X is much more appealing to the enthusiast audience. Its dual-die design once seemed exotic, but now proves nimble in a wide variety of applications. Moreover, higher Precision Boost frequencies make the 2950X competitive against well-established Intel Core processors in lightly-threaded metrics.” Continuing… “Considering the raw horsepower on offer, AMD’s pricing is extremely competitive. Ryzen Threadripper 2950X kept pace with the $1700 Core i9-7960X in many of our tests but sells for almost half of its price.”

This is the base from where the Threadripper 2 processor family starts from, with a very strong 16-Core offering. However, the higher core count processors like the 32-Core 2990WX chip have a different value proposition that is much more niche in nature.

Cores galore with 2990WX with 32 cores and 64 threads, but not for everyone

For AMD to build a 32-Core 2990WX chip, AMD had to architect the chip in a way where not all CPU dies have direct memory or PCIe access. Because it has four dies on a single 2990WX each with 8 cores, AMD must interconnect each chip at half the throughput of what it would be with only two active dies (16-Cores). This makes the chip less performant in memory-intensive applications that are latency sensitive like image processing at Anandtech and is why in some cases the 2990WX will perform worse than the 16-Core 2950X or even slower processors with fewer cores. As a result, the 2990X is a much more targeted chip for specific applications that stand to benefit from CPU core counts and workloads that are less memory-intensive. These are the kinds of workloads like CPU-rendering where we see some reviews indicating major performance improvements. Ironically, because Intel and the industry have been using a CPU-based rendering benchmark to evaluate CPU performance, AMD does exceedingly well when you compare them against each other in Cinebench.

HotHardware states it best: “If you run the kind of workloads that can exploit the many cores / threads available with the 2990WX, its price – while high – is still about $200 lower than the best Intel Core i9 processor, yet the 2990WX can offer 50%+ better performance. If you’re a content creation professional and your time is money, the Threadripper 2990WX is going to look mighty attractive. That extra performance requires some beefy cooling and power, but that’s to be expected with a processor packing 19.2 billion transistors.”

Some reviewers have recommended specific motherboards that have enough power phases to handle the higher power draw of the 32-core chip if you wish to do any overclocking. Additionally, because it’s a 32-core chip with a higher TDP you’ll also need more cooling than you’d normally expect from a CPU. Vendors like Enermax have released full-cover Threadripper chip liquid coolers that come with radiators as big as 360mm. However, these added costs are all worth it when you see how much total value you still get out of the 2990WX and the overall performance benefits for professional workloads. That’s why I believe AMD intentionally gave this chip the WX designation rather than a simple X to indicate that it’s a workstation/creative processor.  This is a workstation processor.

Those major differences aside, the overall Ryzen Threadripper reception has been overwhelmingly positive among reviewers. One of the big points of praise for AMD outside of the performance and core counts is also that AMD have kept their word when it comes to compatibility. The 2ndgeneration Ryzen Threadripper CPUs are drop-in upgradable in X399 motherboards, meaning that users who already have X399 motherboards in their Ryzen Threadripper systems only need a BIOS update to be able to use 2nd generation Ryzen Threadripper chips in their motherboards. I believe that this is an overlooked component of AMD’s overall product strategy because it builds trust with consumers and loyalty within the brand. Ryzen is bringing a lot of customers to AMD that maybe haven’t used an AMD processor in years and AMD is doing a very good job of making them feel comfortable with their decisions.

Realistically, someone who just bought a 1950X isn’t likely to go out and buy a 2950X, but AMD is helping give them a sense of comfort that they can upgrade in the future to a 2990WX if they need. I’m not sure how much compatibility there will be moving forward with Zen 2 and such, but I think AMD is doing a good job of helping build trust back with the community with this decision.

More performance on the table for Windows?

Reviewers are also starting to realize that AMD’s 2990WX’ performance really shines in operating systems that handle multithreading better. This was explicitly found in Phoronix’s review of the 2990WX where there was a considerable performance difference between Windows 10 Pro and different Linux distros in applications like video encoding . Clearly, there’s room for improvement for Microsoft to work with AMD to narrow the gap between Linux and Windows 10 CPU performance with so many cores. Judging by the number of cores we’re seeing from both Intel and AMD, there’s no reason for Microsoft to hold off on such improvements any longer. We’ve already seen both companies’ doubling their core counts in virtually all their products and Windows needs to keep up. Obviously, there will be a point where core counts settle down and I think that we’re near that point, but more performance can be extracted based on what we see here.

I had the pleasure of reviewing the new 32 core 2nd generation Ryzen Threadripper and it did not disappoint. The chassis AMD sent me to review is massive, as you would expect in a workstation. I review products differently than others as I load up all my work and personal apps and data and live with the system. I do run the simpler benchmarks, but don’t run as many as those I cited from Toms Hardware, Hot Hardware, Anandtech and Phoronix.

The first thing that struck me was just how quickly applications unzipped and loaded. It was silly fast. Windows 10 Pro data indexing was the fastest I had experienced, too, including 26,000 photos, where Windows uses the CPU, not the GPU, to do facial recognition and matching. I gratuitously ran Cinebench R15 and, like many other reviewers, scored an eye-popping  5100 cb on the multi-core test. This is a testament to the chip’s outstanding rendering performance.

I also compared 1st generation Threadripper to the 2nd generation on Adobe Premier Pro remixing 10-minute-long 4K videos. On average, I saw 40% scaling improvement between the two systems. Based on what I have researched, this is to be expected, but had I used 8K video or a different video editing application, I believe I likely would have seen more than 40% scaling with double the cores. Don’t get me wrong, 40% scaling isn’t bad, per se, as video editors can get their projects done in 40% less time.

In future testing, I will focus on simultaneously gaming and streaming Overwatch and maybe PUBG to Twitch at 1080P to see how the scaling performs. I will let you know that works out.

The AMD 2nd generation Ryzen Threadripper CPUs are helping to redefine what high-performance desktops cost and what kind of performance profiles they can deliver. This also translates to more competition in the market, which has already shown to make both companies in the space more aggressive on price and performance which will ultimately move the entire industry forward.

For creative professionals the reviews clearly show the new 2990X is great for rendering and video encoding. Enthusiasts also now have competitive high-end desktop parts from AMD that are even faster than the previous generation and show AMD’s ability to continue to execute on the Ryzen Threadripper line. The New 2950X brings great performance in virtually all scenarios, including gaming as well as rendering and video encoding and is more of an all-around chip as opposed to the media-focused 2990WX.

While the unit volumes in this space are low, the profit dollars and bragging rights are bigger. From a marketing and positioning standpoint, this is all about the halo effect, which we see in every technology market. Having what some consider “the best” just makes your premium and even mid-range parts sell better. For AMD to make a substantial financial dent, I believe it will need to sign up tier-1 workstation OEMs like HP, Dell and Lenovo. In the meantime, AMD will arm smaller OEMs with a secret weapon for them to compete with the Tier 1s. This was the exact play AMD used with Opteron ages ago and was quite effective. I am eager to see how this all pans out and I will have the popcorn handy.