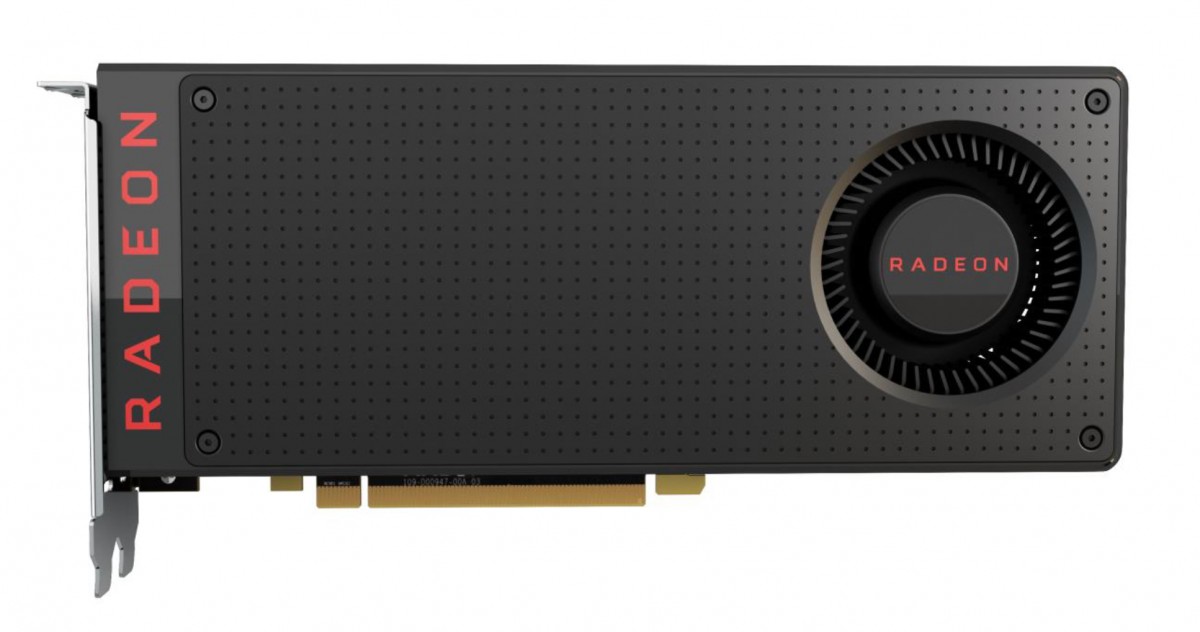 There is no doubt in my mind that many gamers have been waiting for this day for quite some time. Today marks the launch of Advanced Micro Devices’ (AMD) new Radeon RX 480 GPU, the company’s first VR-capable GPU that is sold for $199. This GPU is AMD’s first new major GPU architecture change in quite some time, and although it is still part of the GCN family of graphics chips, it does have a lot of new capabilities and improvements that make it a worthy successor. AMD is positioning the RX 480 as the best GPU for high quality VR enabling both Facebook’s Oculus Rift and the HTC Vive VR headsets at a price point that has never been seen before. Most GPUs that are labelled as VR Ready by AMD and NVIDIA were a good $100 or more than the RX 480 at launch.

Today, thanks to the competitiveness of the GPU market and the efficiency of the 14nm and 16nm FinFET processes from Globalfoundries and Taiwan Semiconductor Manufacturing Company (TSMC), we are able to get fantastic GPUs with great performance for the same or less money. AMD has been building to this moment ever since the company started to support and talk about VR in early 2015. They have been developing new software and capabilities for VR and today the fruits of AMD’s efforts are available to not only those that can afford premium mid-range or high-end graphics cards. The RX 480 is the culmination of a lot of work from AMD and their partners and finally helps drive down the cost of a VR capable system to under $800. That means someone looking to use an Oculus Rift can get a whole VR system for under $1,500 and an HTC Vive and VR system for under $1,600. Driving down the cost of entry to VR is extremely important, and companies like AMD are driving that right now. 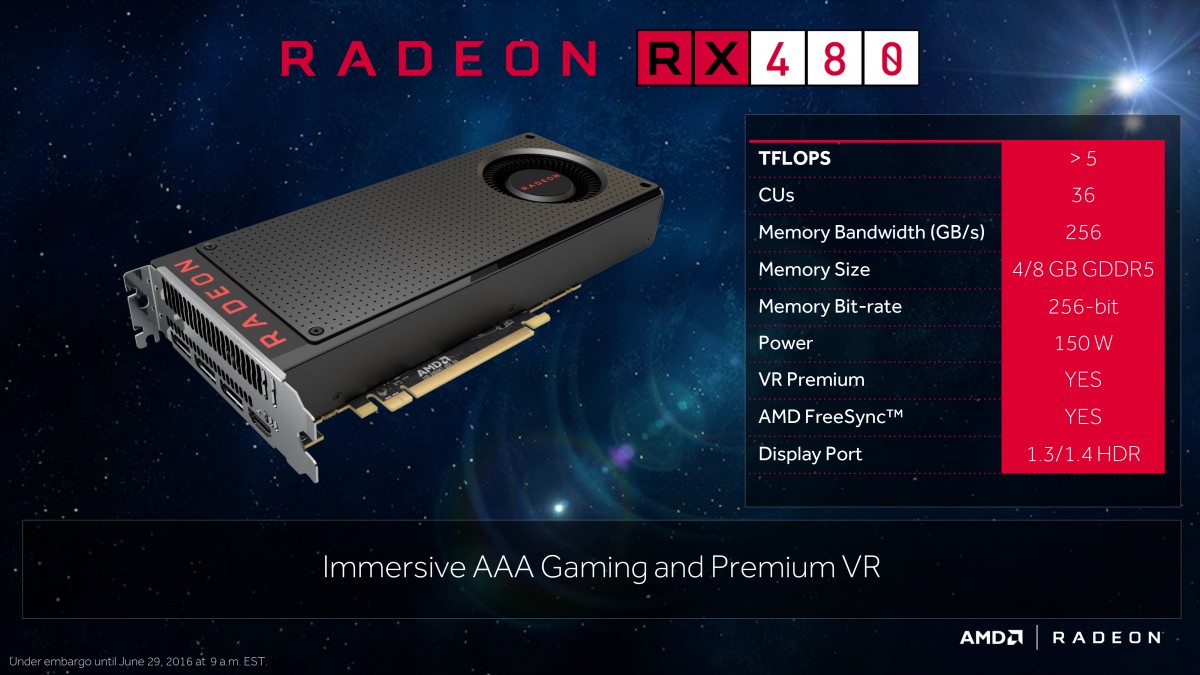 The RX 480 is touted as a VR certified GPU but also one that enables a very good gaming experience outside of VR as well. After all, there still aren’t that many VR games on the market, and not everyone is going to be able to afford a VR capable PC and a new VR headset right away. So, naturally, people are going to want to see how the GPU performs in regular games as well as VR. As such, I wanted to take a look at overall performance of the Radeon RX 480 in regular games against the competition and also to see how good the experience was in VR in the short time that I’ve had to test the GPU.

That means testing the Radeon RX 480 in synthetic benchmarks, real games and even VR benchmarks—not to mention, also trying to use the RX 480 in VR. Also, keep in mind that while AMD is touting the RX 480 as a $199 GPU, the GPU sent to us for testing was the 8GB which cost $239. This is somewhat similar to what NVIDIA has done with their GTX 1080 and 1070, where they provide the press and most consumers with one version of the GPU and talk about a lower MSRP based on AIB custom designs. However, in all of my testing (done at 1440p resolution), I never once actually saw any need for 8GB of VRAM. In fact, I would recommend most gamers buy the 4GB version of this GPU unless they find the necessity to have 8GB or feel more comfortable paying 20% more for the comfort of having 8GB.

In my testing, I used two different systems. One for benchmark testing and one for roomscale VR testing on the HTC Vive. Both systems are running Windows 10 and Intel Core i7 CPUs, one being a 6-core 4960X, the other being an eight-core 5960X. The eight-core system has 32GB of RAM while the six-core has 16GB. Both systems are running on SSDs and have the latest drivers: version 16.6.2 from AMD and 368.39 from NVIDIA. The GPUs tested were the AMD Radeon RX 480 and NVIDIA GeForce GTX 1070. Each of these cards represents the best value GPU from the company and the latest GPU architecture and latest GPU offering. However, the difference in price between the two GPUs is nearly double with most GTX 1070s selling for well over $400. This is important to consider when you look at the performance of these two GPUs side by side. In terms of price, right now the only competitive GPUs NVIDIA has are the last generation GTX 970 and 960, but I do not have either of those to test.

In the industry standard 3DMark Fire Strike benchmark, the RX 480 scored 10,535 points compared to the GTX 1070’s 15,264. In the SteamVR benchmark, which tests to see if a GPU can handle VR performance, the RX 480 scored well into the ‘ready’ category with an average quality score of 6.7 and 8,597 total frames rendered. The GTX 1070 actually maxed out the VR readiness scoring system with a score of 11 and 12,291 frames rendered. In both of these benchmarks, you can see that the GTX 1070 is without a doubt faster, but is only about 50% faster in both cases at about double the price or 100% more cost. That means the RX 480 is a much better deal in terms of performance per dollar, which is pretty impressive when you consider how big of a deal the GTX 1070 was at launch. 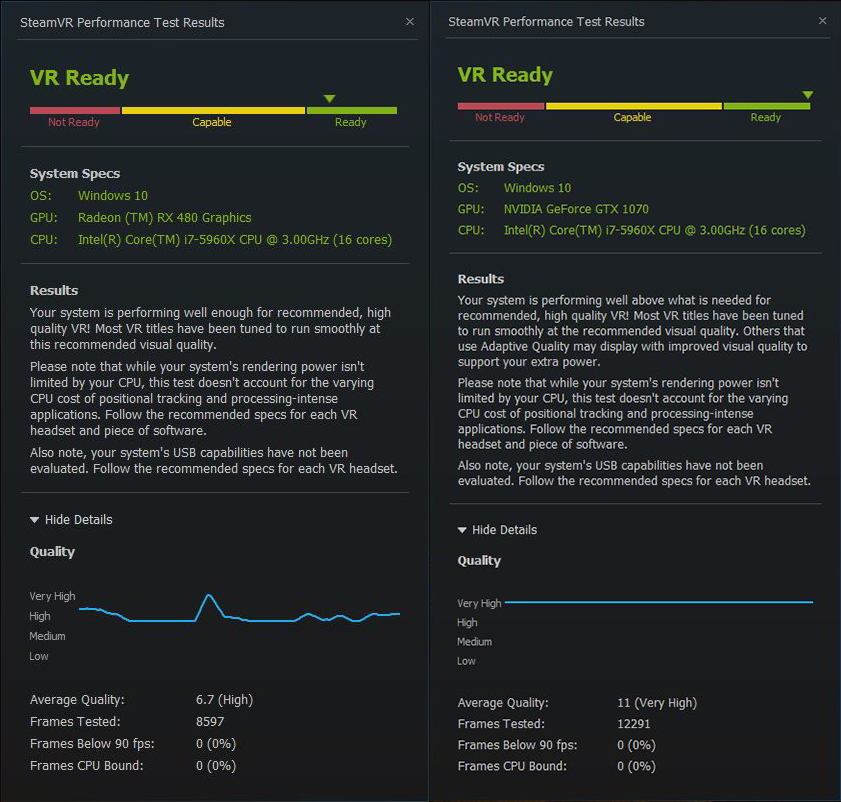 In Hitman, both GPUs were tested at high presents in DirectX 12 and the RX 480 performed at 56.39 FPS average while the GTX 1070 performed at 69.17 FPS. Once again, the GTX 1070 is the faster of the two, but it is also intended for a much higher price segment at double the price. As a result, the RX 480 delivers a value metric of $4.2 dollars per FPS and the GTX 1070 at $6.2 per FPS. This benchmark clearly delivers more performance per dollar with both GPUs, but the AMD RX 480 is simply the better value of the two for a small tradeoff in performance.

For DOOM, the latest game I tested, the price-to-performance delta was less noticeable with the GTX 1070 producing an average of 106 FPS at high settings while the RX 480 produced 64 FPS average at the same settings. Going back to dollars per FPS, using the $239 and $429 pricing for each of these GPUs, the RX 480 is as low as $3.7 per FPS while the GTX 1070 is $4. This means that for DOOM, the performance difference is bigger and as a result the performance-per-dollar appears to be much closer. Both cards delivered a very smooth DOOM experience and I was extremely impressed with how well it ran on both cards at high graphical settings. 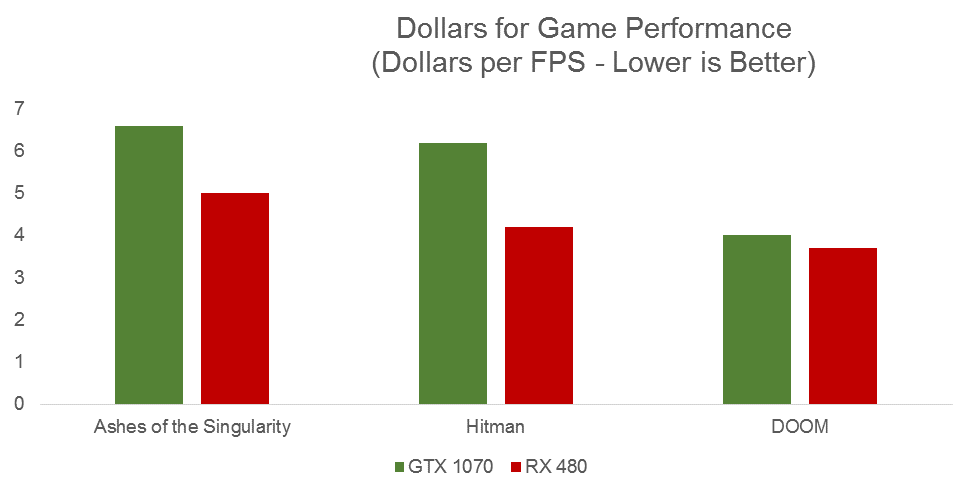 As a side note, during none of my testing did I ever use more than 4,096MB of RAM on this GPU, which means that users can save themselves some money and buy the 4GB version of this card for $199. I say that because 8GB is probably good when you have something like a GTX 1080 and are running things at much higher settings, but this is a $199 GPU and runs games at lower settings and doesn’t really run games well at settings that would use more than 4GB of VRAM.

In terms of overclocking, the RX 480 was interesting, yielding only a 6% overclock in terms of clock speed. However, the surprising part was that when testing my overclocking performance in 3DMark the 3DMark score actually went up by more than 6%, increasing to a score of 11,487 from 10,535 or about 9% performance. I do believe, however, that this GPU could probably overclock further if it had more power supplied with dual 6-pin connectors on a custom card since I was hitting the 150W power draw limit. I could see this GPU going well beyond a 9% performance improvement with the right power delivery and cooling. Under normal usage and gaming, the GPU never hit 150W and stayed under 90C. AMD’s WattMan software, which can be used to control the GPU is included in the drivers and allows you to lower the operating temperature and increase the fan speed if you believe 90C is too high to let a GPU get before it speeds up the fan. I prefer to keep mine at 80C, but there was no noticeable different in noise that I could tell. 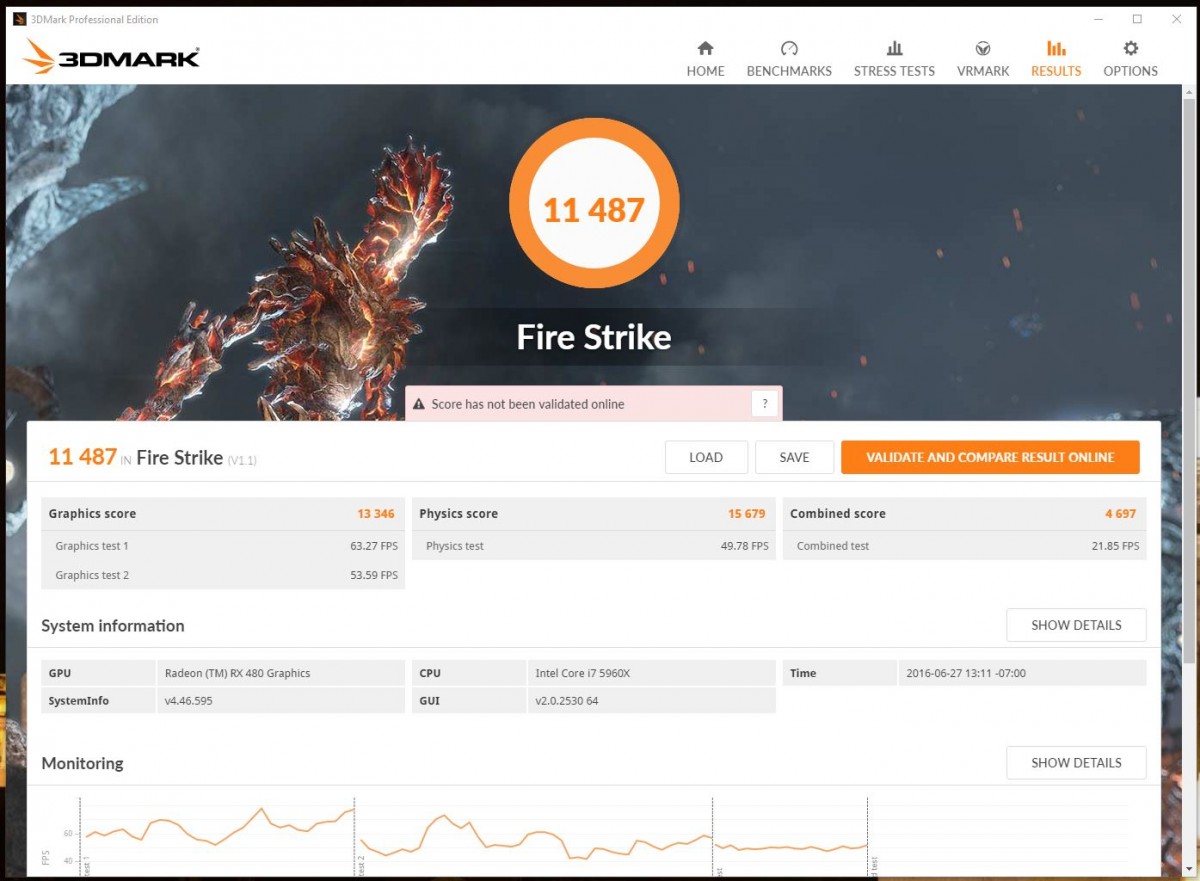 I also used the Radeon RX 480 in VR hooked up to an HTC Vive and I played multiple games including Space Pirate Trainer, #SelfieTennis, Catlateral Damage, Raw Data and The Lab. These games varied in complexity and graphical intensity, but since most of them were made for VR, they are all very FPS- and latency-sensitive, and I experienced no difference in terms of experience. In fact, I could have easily blindly tested the system and not known if it was the $1,500 Radeon Pro Duo that I normally keep in the VR PC or the $239 Radeon RX 480. And that is the beauty of the RX 480 in VR, it delivers a good enough experience for VR right now that more people can afford to try VR and to do it with a cheaper upgrade than ever before.

The RX 480 is not intended to be a flagship GPU; it isn’t even intended to be a very fast GPU. The RX 480 is designed to be a GPU that delivers a very good value with good performance and a great price. It also does this while being able to deliver enough performance to be able to run both Facebook’s Oculus Rift and the HTC Vive and have certification from both. I can personally say that the HTC Vive runs extremely smoothly on the RX 480, and to me that is a major win for AMD and VR gaming. I expect that there will be other VR headsets out there in the future like the OSVR headset, and there’s a very good chance that the RX 480 will be the GPU of choice for gamers using those as well. At the $199 price point, the RX 480 4GB variant is the best option for consumers today and even though the 8GB is the currently available model at launch, there is still great promise for very inexpensive PC VR. This means that many gamers with semi-capable PCs may be only $199 away from having a VR ready PC and if they don’t have one they can build one for under $799.