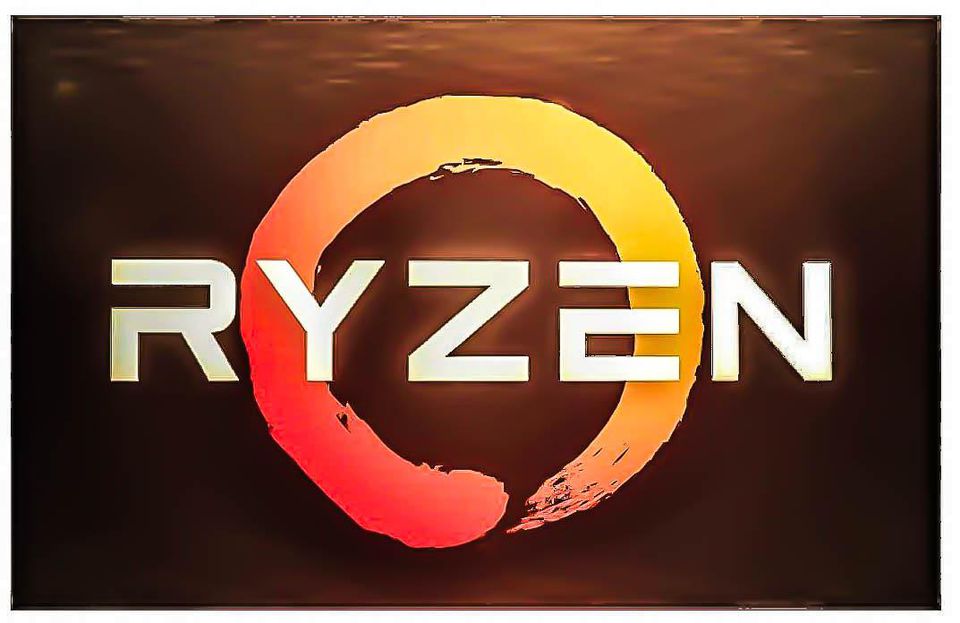 2017 was quite the year for Advanced Micro Devices who came from the throes of corporate peril to a sustainable entity to a product performance leader in certain products, workloads, and markets.  When was the last time you saw this? What a difference a year makes. AMD’s client computing group, in one year, announced Ryzen ThreadRipper, Ryzen (7, 5, 3), Ryzen Mobile for notebooks and Ryzen Pro for commercial markets.  AMD made a much bigger impact in desktops than in notebook and gained a profitable 2.1% desktop market share (Mercury Research), but I am expecting notebook gains in the first half of 2018 with new models I see from HP Inc., Dell, and Lenovo. AMD also introduced the Ryzen APU which I believe will actually be the volume driver.

So, is it time for AMD to sit back and bask in 2017 glory?  Not a chance. Intel does not like to see any benchmark bars or even price/performance bars higher than theirs, and let’s not forget that Qualcomm has entered the space, too. So today, AMD officially launched their second-generation Ryzen desktops called “2nd Generation Ryzen” I have been testing 2nd gen Ryzen for the past week and have been quite happy with it, but I would like to cover what this all really means.

What AMD is launching

AMD is launching their second-generation desktop parts today without integrated graphics, so they are targeted at enthusiasts and the performance desktop market. Like the original Ryzen desktops, AMD will distribute a PIB (processor in a box) online for DIYers and through smaller system builders as full systems.  This is an effective copy and paste of what AMD did their first round and is a historical AMD sweet spot. AMD knows how to run this play well.

Not only is AMD pricing their highest SKU $70 less than their Ryzen 7 1700X at launch, but the company is also adding a free and nice cooler. In fact, AMD is making coolers a standard item on all these new systems, and I think that is providing more value but also lets them stretch capabilities of the frequencies as they can be assured of the specific cooler and frequency combinations.

More performance and features at the same price

To me, the theme of 2nd Gen Ryzen is “more for the same price,” but don’t confuse this as cheap.  Ryzen 2 should deliver more performance and more features and I believe will be very competitive, even more competitive than the original Ryzen.

Performance at a good price point is key for desktop buyers, and AMD has improved performance many ways:

PC Perspective benchmarks bear this out: 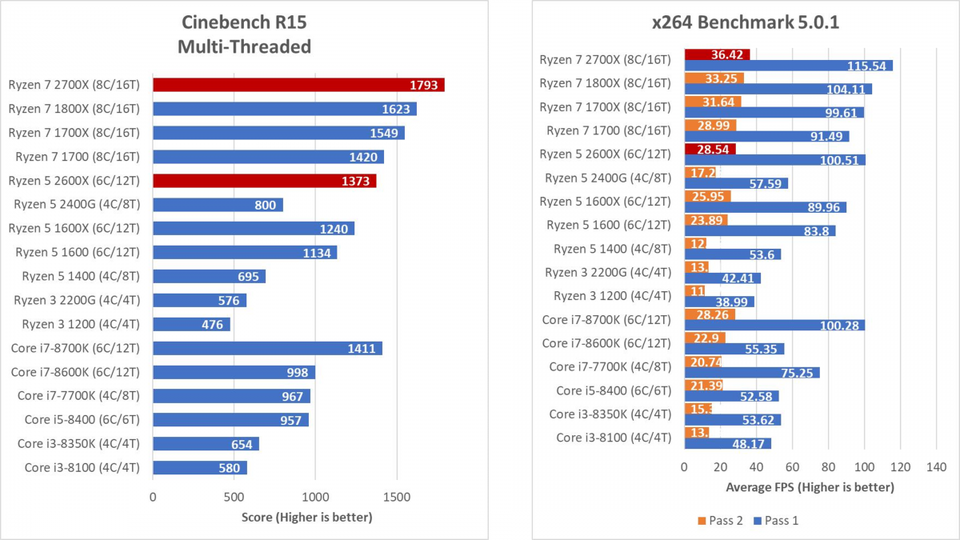 One market perception issue AMD had with first generation Ryzen was that lower resolution or older DX9 games didn’t perform as well competitively. I’ll admit, I was even a bit surprised at launch. This go around, AMD worked very hard to improve performance with older DX9 games and games at lower resolutions like 1080P. This is an area where gamers will see tremendous, double-digit improvements of 2nd gen Ryzen versus 1st Gen Ryzen, significantly cutting most of the lead Intel had here. Gamers can thank Ryzen’s increased clocks and lower latency for this improvement. Net-net, at 1080P and 1440P, I’m not expecting to see many experiential differences between AMD and Intel.

PC Perspective benchmarks bear this out: 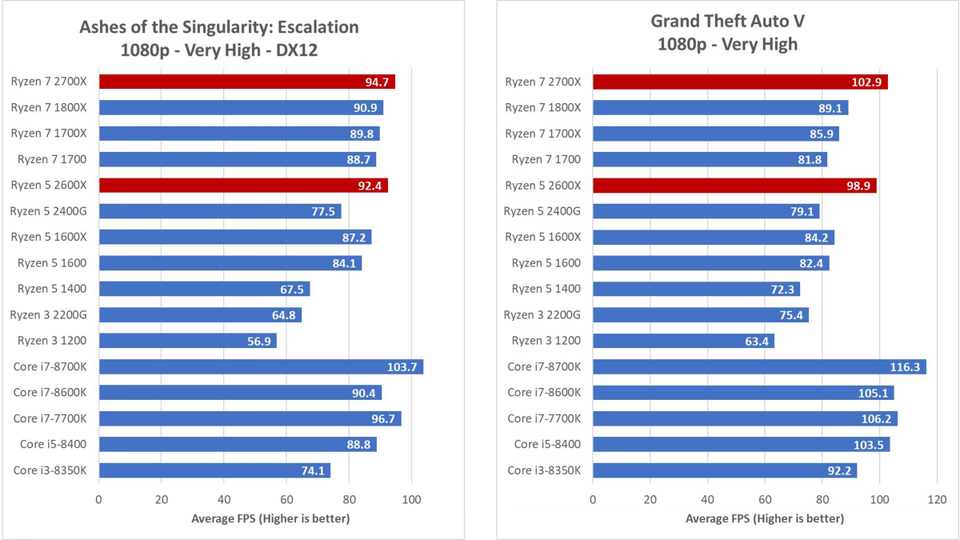 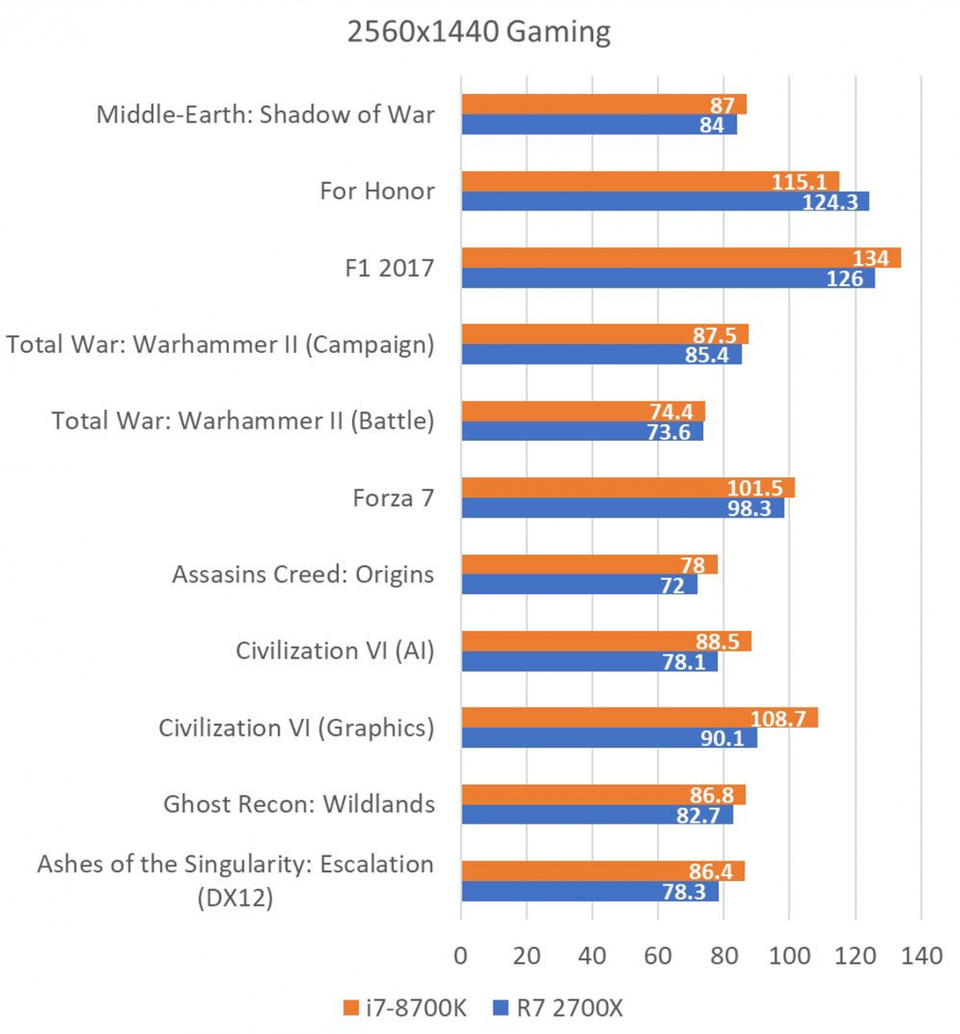 AMD also wanted to deliver more features with 2nd Gen Ryzen. Many of these you may not understand or appreciate, but they are important to many enthusiasts and gamers. AMD improved the metal lids to improve thermal efficiency for overclocking and even lower noise, unlocked all multipliers for easier overclocking, added an improved Wraith Prism cooler to the 2700X, and improved fine grain granularity of AMD’s overclocking tool, called AMD Ryzen Master. If you are into tweaking your rig, you will love this stuff. I’m looking forward to playing around with Ryzen Master as I like to easily overclock my PCs to the brink of instability. Why? Because I can.

For upgraders, 2nd Gen Ryzen will drop into today’s AM4 platform, but if you want all the new goodies like higher clocks and the new AMD StoreMI storage acceleration technology, you’ll want a new motherboard with the AMD X470 chipset. Motherboards are available from ASRock, ASUS, Gigabyte, and MSI.

Advanced Micro Devices took a very successful first-generation Ryzen performance desktop part and made it better in almost every way possible way when you factor in it’s only been a year since the original Ryzen launch. The company could have rearchitected 2nd Gen Ryzen with 12nm cell libraries but opted instead to use the 12nm transistors instead. Had AMD used the 12nm cell libraries, they would have opened themselves up to a lot more work and risk. I think this was a good call from a resource-payback standpoint, so AMD can focus its big resources on 7nm and Zen 2.

AMD improved on an already impressive multithreaded performance like video editing and significantly improved gaming performance while improving power efficiency.  In one year.  That’s hard to do, and AMD is benefitting from Globalfoundries 12nm process and time enough in the saddle to make small improvements across the board from listening to end customers.

After AMD’s success in 2017, 2018 for the client computing group is shaping up to be an even better year. The company still has a lot more products to introduce this year including Ryzen Pro Mobile in Q2 and 2nd Generation Ryzen Pro desktop processors in 2H for the commercial markets and of course, 2nd generation Threadripper in 2H, so AMD is not done yet.