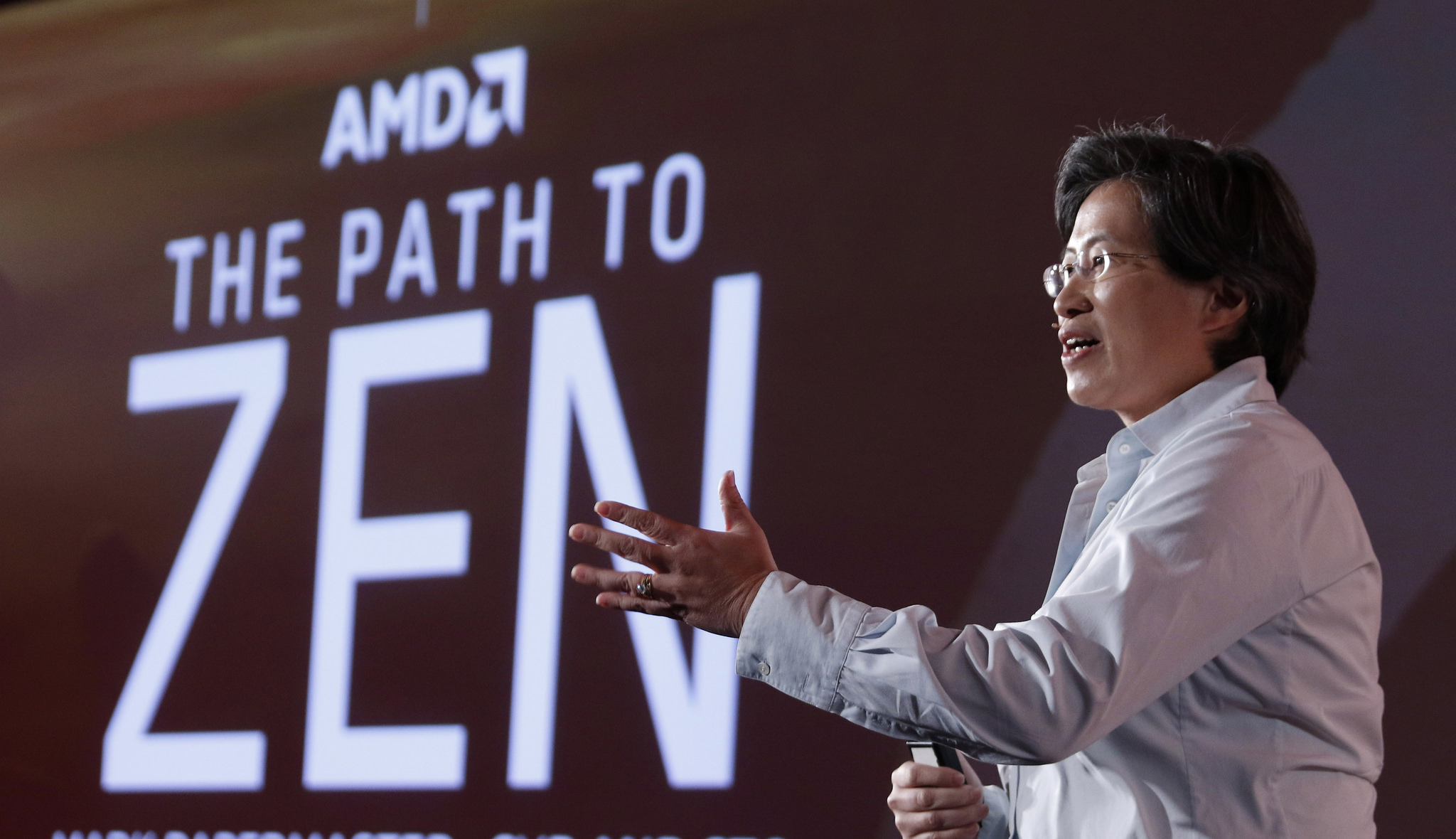 When Advanced Micro Devices CEO and President Lisa Su joined AMD in January 2012, AMD’s prospects were looking bleak. The company was in an identity crisis—multiple execution issues had a shaken their customers’ confidence, they’d become overly dependent on the PC market given the market slide and the company had become distracted by markets that didn’t necessarily align with their strengths, and frequent roadmap and strategy changes had caused company distrust. In 2012, AMD was nearly $2.5B in debt and revenue had grown only once in the last five years. People were talking, as they always do—there were rumors of bankruptcy and spin-offs.

When Lisa Su was appointed CEO in 2014, she was faced with the formidable task of bringing AMD out of the virtual wilderness—and by bringing new focus to the company’s culture, execution, and technology. In what many considered the impossible, Su managed to lead this just that after two years at the helm. While it’s unfair to say the turnaround is complete until we see the full fruits of Zen, the company is on the right track and Advanced Micro Devices is on the comeback trail.

Lisa Su’s first actions as CEO sought to bring some much-needed clarity to the company—identifying a set of “stickier” high-growth, high-margin markets to focus on in addition to the client computing device market. With an estimated $50B TAM, AMD redefined their focus areas—gaming, datacenter, and immersive devices. With that in mind, she set out a three-pronged rejuvenation approach—build great products, deepen customer relationships, and simplify the business.

The first point, building great products, was obviously the top priority, and key to the company’s survival and turnaround. This may seem basic stuff for a high-tech company, but when you look at the messages and call to arms back in 2012, it wasn’t necessarily about great products. AMD had to refocus and get back to the core competency the company originally built its reputation on—building excellent high-performance compute and graphics solutions. Advanced Micro Devices did a deep analysis of their roadmaps to make sure their most important projects were receiving necessary resources.

They streamlined R&D and honed their CPU roadmap in on one scalable design—the highly anticipated and much talked about “Zen.” They settled in on a new product cycle—new GPUs every year, new CPU cores every 1.5 years. To ensure the company is truly maximizing their industry-leading IP, they also formed a new IP monetization strategy—nurturing and growing market opportunities for their technologies. Lastly, they created a focused committee of business and engineering leads from across the company to periodically review the roadmap to make sure AMD is investing in all the right directions—keeping the company on track to deliver to their customers the right products at the right times. When you look at AMD’s current generation GPUs and next-generation CPU core technology, you can see that these new strategies are starting to pay off.

“I AM ZEN” proclaimed AMD at Computex 2016 (Credit: AMD webcast)

The next point of order was to deepen strategic customer relationships and has been something I was critical on with Advanced Micro Devices for years.  If you aren’t a major part of your customer’s strategic thrusts, any company will then be just reliant on price or the best tech and that’s never sustainable for any company over the long haul. Just showing up, no matter how difficult it is, just isn’t enough anymore.

A perfect example of strategic alignment is AMD’s close collaboration with Sony and Microsoft over the past 5 years—they’ve become the silicon partner for both the Xbox One and the PS4, designing and building (in characteristic AMD fashion) a console on a chip that combined processor and graphics technology. This is so simple in that AMD brings best-in-class graphics, video, and processor IP with big SoC capabilities. The collaboration between the companies is continuing with the new Xbox One S, PlayStation 4, PSVR and PlayStation Pro consoles, as well as Microsoft’s “Project Scorpio.” I wasn’t too hot on the gaming console market at the beginning, but the new industry refresh model has made me a believer if the ecosystem demonstrates continued change and evolution.

AMD’s relationships within the enterprise, commercial client space are also thriving. This is evident through the launches of the 6th and 7th generation AMD PRO APU- based HP EliteBooks and with Lenovo. I have been surprised at AMD’s level of success here, quite frankly, because this is where commercial OEMs make all their money and there is no room for error. The competitive set also brings to the table many relevant enterprise technologies. The reality is, no one wants their technology destiny in the hands of one company and AMD helps alleviate that fear. 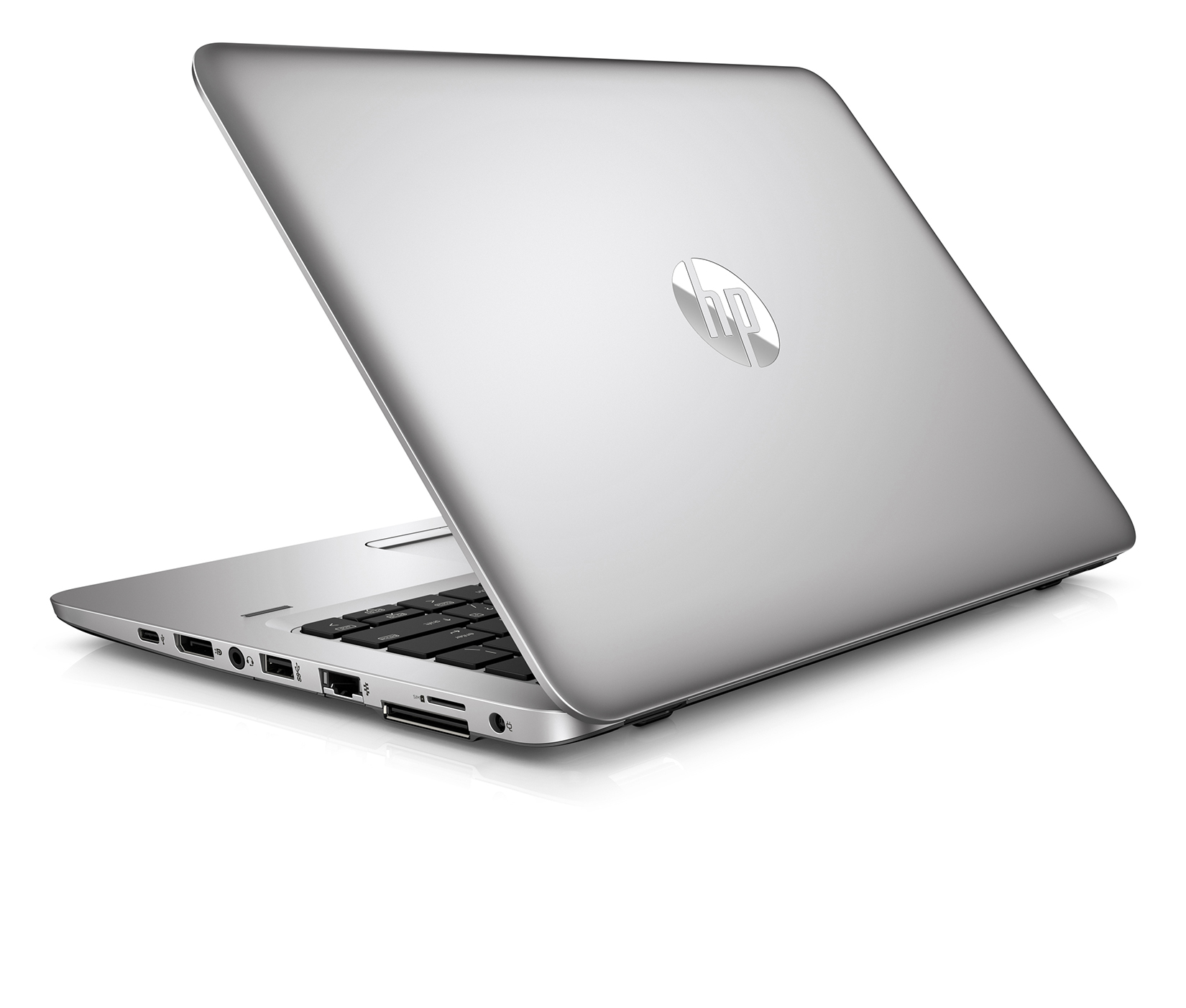 In another realm, AMD partnered with Oculus to introduce a limited addition “Oculus Ready” PC, bringing the cost of entry for a VR-ready system down for the first time to an economical $500—a prime example of how AMD is enabling and growing the VR ecosystem. Competition quickly reacted, but I know AMD drove the market there. The company democratized PC VR and in my forecast, moved the industry ahead of its likely path by 6 months. 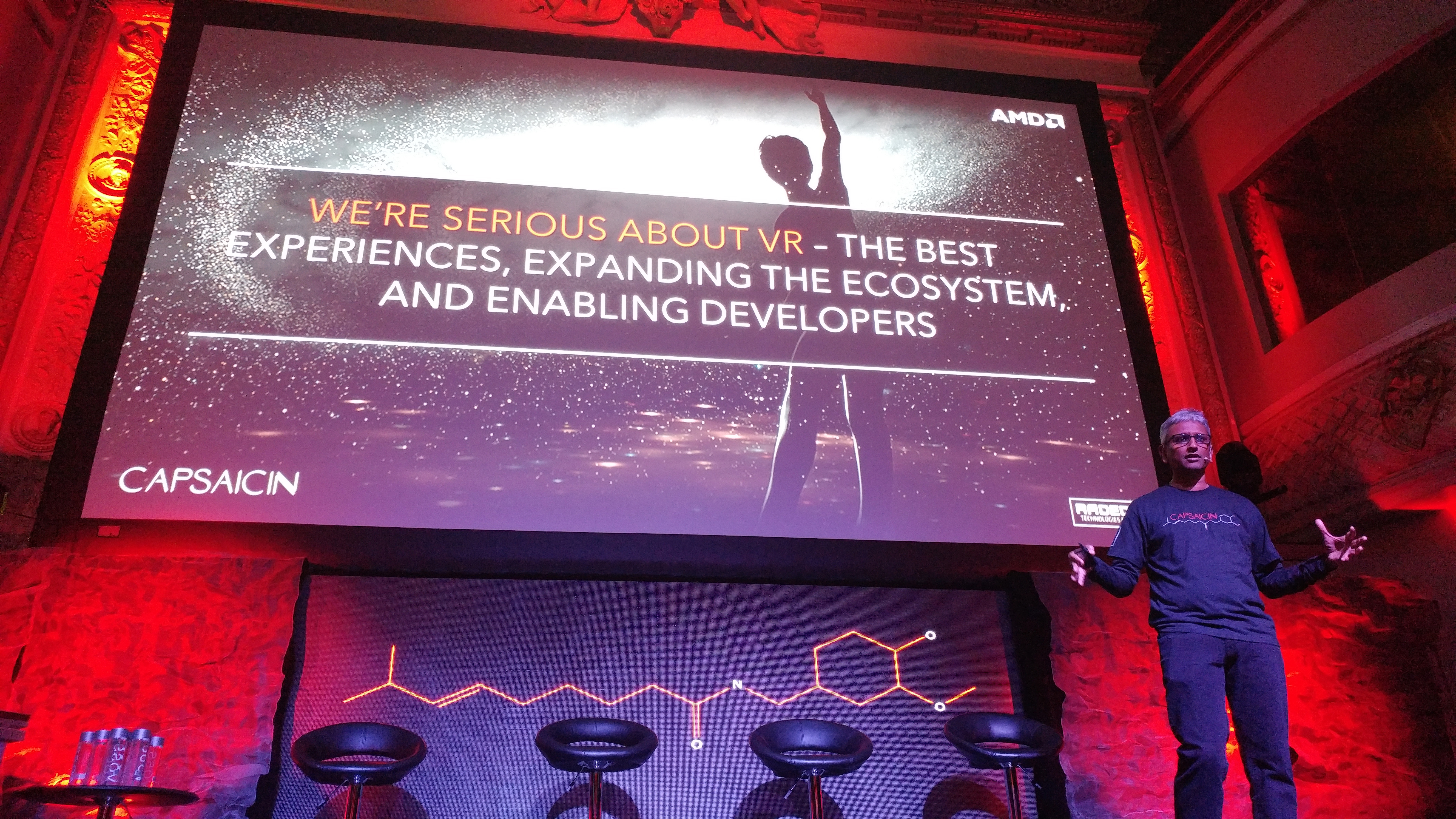 Lastly, but perhaps most forward-looking, is AMD’s planned return to the datacenter in 2017 with their Zen-based “Naples” SoC—expected to bring differentiated performance and features to the “stickier” $18B server CPU market. The dominant player, Intel, has 98% market share, and while they bring great technology to the table, the industry isn’t comfortable with the current dynamics and wants more competition.  AMD already has a good start in China with their recent $293M China server joint venture.

Align strategy with organization and simplify

The third prong in the strategy was simplifying AMD’s business to align with their new strategy and focus. They created a new structure that translates directly to the company’s business goals—for example, they created the Radeon Technologies Group to bring a vertical focus to their graphics and immersive computing divisions.  They’ve also revamped their organization from the top down, upping the transparency and frequency of executive communications, and encouraging collaboration and dialogue, to foster a more inclusive culture. These changes have done much to address the crisis of confidence between employees and management that existed prior to Lisa’s appointment. 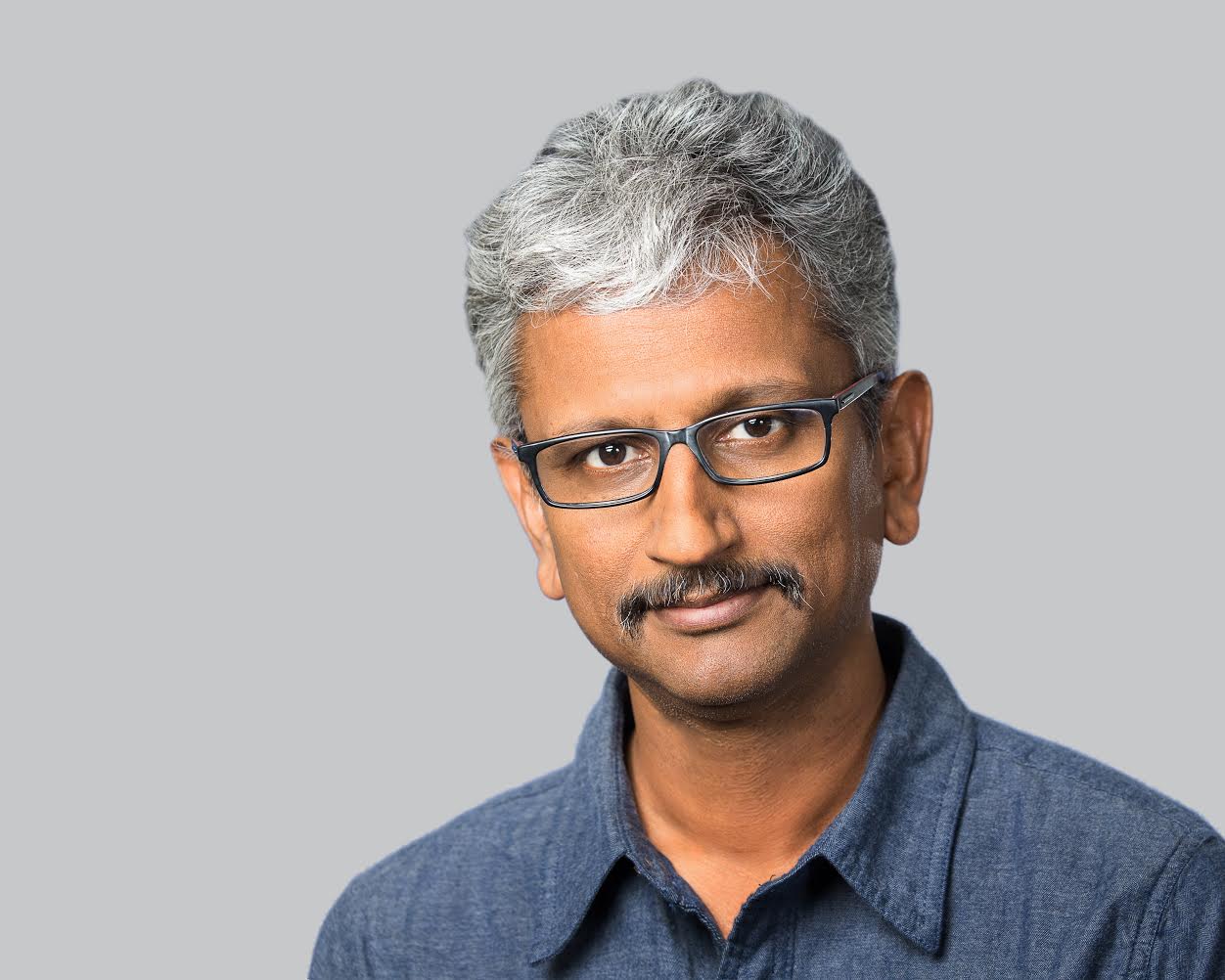 AMD is now two years into Lisa Su’s tenure, and it looks like her strategy is beginning to pay off in big ways. In addition to fine-tuning the company’s structure, AMD has doubled down on their CPU efforts, grown their semi-custom business, and stepped up their marketing efforts across client and component, while pushing even further into commercial client—the latter leading to AMD’s first sequential revenue increase in Computing & Graphics Group in two years, in Q3 2015. In addition, AMD was the exclusive launch processor partner for HP’s new line of commercial-focused laptops announced that same quarter—a first for the company.

AMD is now the number one provider of graphics technology for home game consoles and has captured the #1 market share for thin clients. The company recently held the first public demo of “Zen,” and it appears to be on track, and meeting the expectations they initially set forth in May 2015. And while I expected a bit more from Polaris, their graphics team has also delivered an impressive four straight quarters of unit market share growth.

From a financial standpoint, we’re also seeing Lisa Su’s strategy pay off—this year, AMD’s stock price has more than doubled.  Through joint ventures, and capitalizing on the renewed confidence in AMD’s business, the company is now in much better shape when it comes to their cash, opex, and debt—all of this considered, it appears excitement for AMD amongst employees, customers, and shareholders is finally starting to return.

Let me be very clear- Advanced Micro Devices still has some ways to complete a successful Zen launch, but I think we can stop for now questioning AMD’s survival and talk about the degree the company competes and thrives. Under Lisa Su’s management, they’ve successfully refocused, re-strategized, and restored confidence in the company. 2017 is going to be a very big year for AMD, with their re-entry into the high-performance PC, datacenter, and high-end graphics markets. I’m encouraged by “Zen” and the direction it appears to be headed in, and I’ll be following the project closely in the coming year.  If successful, it could be a real game-changer and milestone for AMD, and would speak volumes for Lisa Su’s leadership and vision. I believe they’ve got a $50B market for the taking, if they continue to make the right moves.  Lisa Su and her team has brought respect and swagger back to the company and that folks, is incredible.