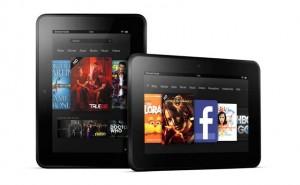 As I read through story after story, one might construe that Apple‘s tablet supremacy is about to end.  Amazon announced some impressive tablets, Apple is being challenged, but a downfall to supremacy? This couldn’t be farther from reality.  I want to shine a light on a few key items that are being overlooked.

Not Everyone Likes Advertisements on their Lock Screen

One very important item that wasn’t  discussed in the announcement was that every Kindle Fire HD is ad supported.  What does that mean?  It means that when you lock the device, an ad will show up on the lock screen. I bought ad-supported Kindles for every member of the family last holidays and none of them were comfortable with it.  I didn’t think I would mind it but I did.  The odd part is that my family members were annoyed that everyone else could see the ad and that it didn’t feel personal.  As I buy something from Amazon weekly, am a Prime member, and I now buy my iPad content from Amazon, I’m not outside their demographic. Amazon should at least give an option to pay to make the ads go away.

According to many in the industry, Apple will release an “iPad Mini” in October.  It supposedly will ship with a 7.X” display at 1,024×768 resolution or a bit higher and come with 16GB or storage and is priced between $249-299.  The sheer fact that Apple will launch a tablet at that low of price will bring bring in consumers in swarms.  Yes, consumers will be able to get the Kindle Fire HD 8.9″ tablet with 1,900×1200 resolution for $299, but they’re also not getting the Apple brand and experience.  I’m not saying the Fire HD doesn’t have a good experience, but I will reserve my judgement until I have actually used one.  I did buy the original Kindle Fire and haven’t used it for months as I have switched to a Nexus 7 and iPad 3.

When you buy a Kindle Fire, you must buy apps from Amazon’s store.  You cannot buy them from the Google Play Store or from Apple’s Store.  Why is this important?  Consider during the first generation Fire it took months to get a Facebook and Twitter app.  Do you want that next latest app?  It probably won’t be coming to a Kindle near you at first.  Eventually, it will, but developers don’t see the Amazon Store as their first point of entry.  Some consumers just won’t care about that, but for those that do, they should avoid the Kindle.

Many consumers have invested into the Apple music, TV, movie, and app ecosystem and would have a tough time changing to Amazon.  The Kindle Fire could play Apple Store music if it were exported to a PC then imported to the Kindle Fire HD, but that’s not easy.  No games, movies or TV can be exported from iOS or Android and imported into the Fire HD.  This could be on the minds of consumers who have already invested.  This goes the other way, too, in that if consumer have invested into the Amazon ecosystem they will be much more comfortable buying the Fire HD, particularly those who have bought a Kindle and read a lot.  One big difference, you can buy an iPad and stock Android tablet and consume Amazon book and video content, but not the other way around.

The web browser for the original Kindle Fire was mediocre at best.  The Silk browser was supposed to speed up connections via methods of caching in Amazon’s giant data centers.  It sounded like a great idea and on paper, was superb.  The issue was that there was really no metric that actually showed it was faster.  In third party tests, it was slow.  We will all need to see how sites like Anandtech test the browser, but with Google’s Chrome and Apple’s Safari, I’m not expecting anything great from Amazon.  But we will see.

Apple has a feature called AirPlay that lets you wireless display content from the iPad to your TV or even a monitor via an Apple TV.  This eliminates he need for cables.  The Fire HD offers connectivity to TVs and displays via optional HDMI cables, but there is no way to do this wirelessly.  Again, not everyone will care about this, but for those who do, they will opt for the iPad.

Again, the purpose of this article is not to slam Amazon or denigrate its products; it is to do a sobering reality check on the future of tablets, namely those $499 and below.  Amazon has shown up with some very competitive hardware, software, content and services, but this by no means victory.  It’s now Apple’s turn to see what they do in October and bow consumers respond. I do not see the game changing much here, other than I don’t think Apple can have 90% share in the 7-8″ space like they do in the 10″ space, but I could still see them as the leader.