The tablet market has been a challenge for most everyone without an ARM-based SoC, but Advanced Micro Devices (AMD) just made an x86 SoC tablet announcement that has really piqued my interest. Last week, Advanced Micro Devices (AMD) launched their “Mullins” x86-based SoC specifically designed for Windows 8 tablets and Advanced Micro Devices’s (AMD) Mullins both enhances AMD’s tablet game by both significantly increasing performance while appearing to decrease power. I got the chance to use AMD’s pre-production development tablet platform, a reference design, called “Discovery” and I wanted to share with you my thoughts. Let me first start with a little background.

The global tablet market today is dominated in units by 7” Android tablets priced from $99-$199. This is anything but a profit haven, with very few people making any money. A much smaller, but much higher margin and revenue business are 10”+ Windows 8 tablets or 2-in-1s. These Windows 8 devices need higher levels of performance as end users equate Windows with a fuller PC experience, and these tablets need to deliver that experience. Windows 8 tablets is where AMD’s Mullins comes into play while AMD’s Beema is targeted more toward 2-in-1s and clamshells. I believe Mullins is one of the first tablet SoCs that gets close to delivering a true PC experience in tablet form. Let’s start with what the reviewers saying.

What the reviewers are saying

AMD Mullins is benchmarking very well with many of the third-party outlets with a caveat on battery life:

Net-net, based on these third party benchmarks, AMD’s Mullins is strong in gaming, web, media, and productivity benchmarks. There is an expectation of competitive battery life, but without testing battery life. Benchmarking is one thing, but how about the experience? 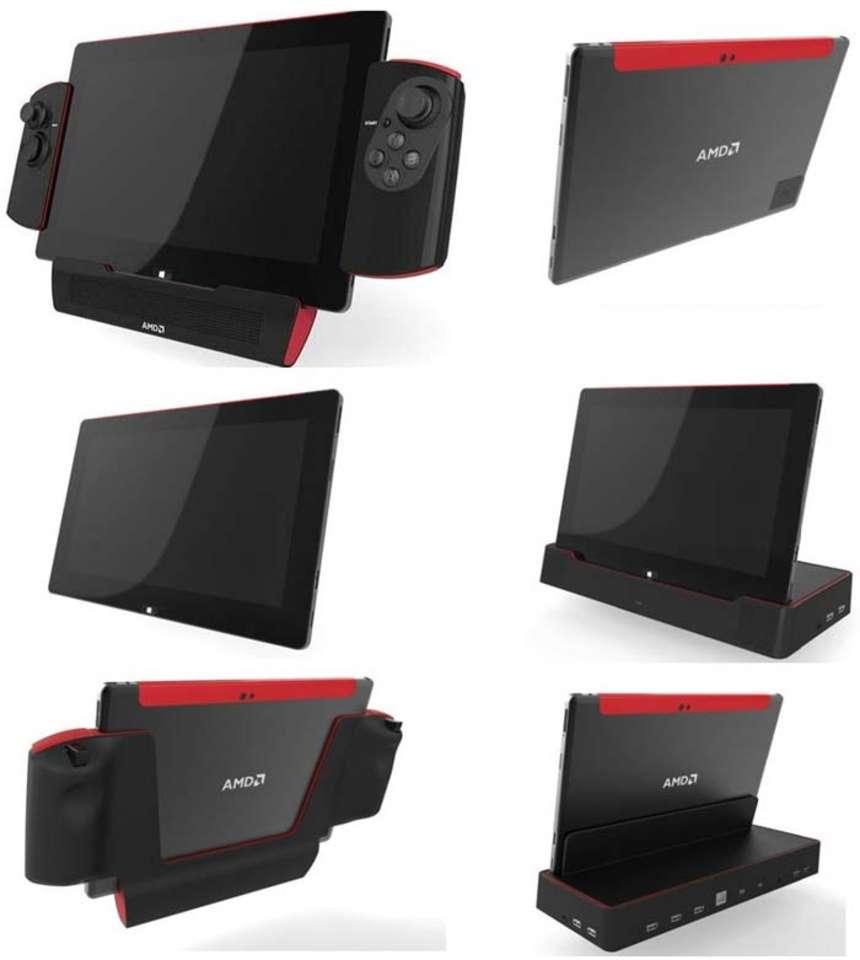 AMD hand-built some fanless, Mullins-based Windows 8.1 tablets and I got the chance to use it for a few days. My “Discovery” reference design was less than 10mm thick, configured with the following:

The Discovery tablet was like a reference design on steroids, short of an end consumer product, but much better than a test harness to show the capabilities. OEMs would do a lot of the optimization themselves based on this reference platform. I loaded all my software I use at least weekly, many daily, on my Windows 8 tablets and 2-in-1s. These are apps like Chrome, MS Office 365 (with Outlook, Word, PowerPoint, and Excel), Evernote, Xbox Video, IM+ Pro, Twitter, Facebook, Pulse News, Vidyo, Hulu Plus, Netflix, Adobe Reader XI, and Google Drive. While this is a tablet SoC, I went ahead and downloaded some Windows PC games I had on Steam: Call of Duty 4: Modern Warfare, Left 4 Dead, The Elder Scrolls V: Skyrim, and DiRT Showdown.

I am happy to say, my experience was excellent for an 11.6” Windows 8 PC tablet with its lower power 2.8 watt SDP (4.5 watt TDP) SoC.  I will only focus on the hardest hitting apps where you may have experiential questions.

On the hardest hitting applications, Windows desktop games, the experience was better than expected. I played all games at 1080P (except DiRT at 720P) and they all played well at acceptable frame rates with lots of eye candy turned on. Keep in mind these are PC games, not Angry Birds, and need a lot of muscle to make them work well. My gaming experience correlated with what the benchmarkers showed.  This experience was driven primarily by AMD’s Radeon R6 graphics with 128 shaders clocked at 500 MHz on the SoC.  Another thing that made the gaming experience so good was the dock, which provided stereo speakers and more ports than I needed to have a more “desktop-like” experience when I needed it on PC games. Sure, Angry Birds and Riptide GP 2 ran great in tablet mode, but the surprise was how well the Windows desktop PC games ran.

My productivity experience was really good, too, led by full MS Office 365 with full Outlook and add-ins connected to a Google Apps back-end, the environment I live in for my small business work life.  I didn’t feel any delays, jerks, or stutters, even as I loaded the system up with my 40,000 emails (no, I don’t delete many emails) and 5,400 Evernote notes.  This has been an issue with previous low power, Windows tablets for me, but AMD seems to have solved this issue at least on the Discovery unit. While hitting the GPU, this productivity experience was driven primarily by the newer Puma+ quad core CPUs driven up to a max of 2.2 GHz combined with DDR3L-1333 memory.

Overall, on my personal software load and some games off of Steam and the Windows 8 store, Discovery felt great.

What about Mullins and Discovery tablet battery life?

I would be remiss to not talk about battery life on the unit as it is as important on a tablet as application performance. AMD has made some very impressive improvements in power management with Mullins, getting extremely fine grained in their approach. They added at least 6 new power management features, the most interesting being a measurement of tablet “skin” temperature enabling what AMD says delivers 66% performance increases in “key” workloads. Also according to AMD, compared to its predecessor, Temash, Mullins provides 2X the graphics performance per watt, and based on PCMark 8, nearly a 2X “productivity per watt” improvement.

With Mullins, AMD has done a really good job upping its game on Windows 8 tablets and Beema with 2:1’s. They have absolutely increased performance and improved the experience inside the same thermal limits as its predecessor, Temash. That in itself, is a feat.
If AMD can hit acceptable battery life times on production tablets with an ODM and OEM, this would be excellent. Even with a really good product, there will be challenges. Intel has thrown down the 40M unit tablet gauntlet for 2014, and based on last quarter’s earnings report, Intel will take as many “sockets” as it can find. Additionally, Intel’s 14nm Cherry Trail platform is right around the corner.

AMD needs to act fast to take advantage of this opportunity.